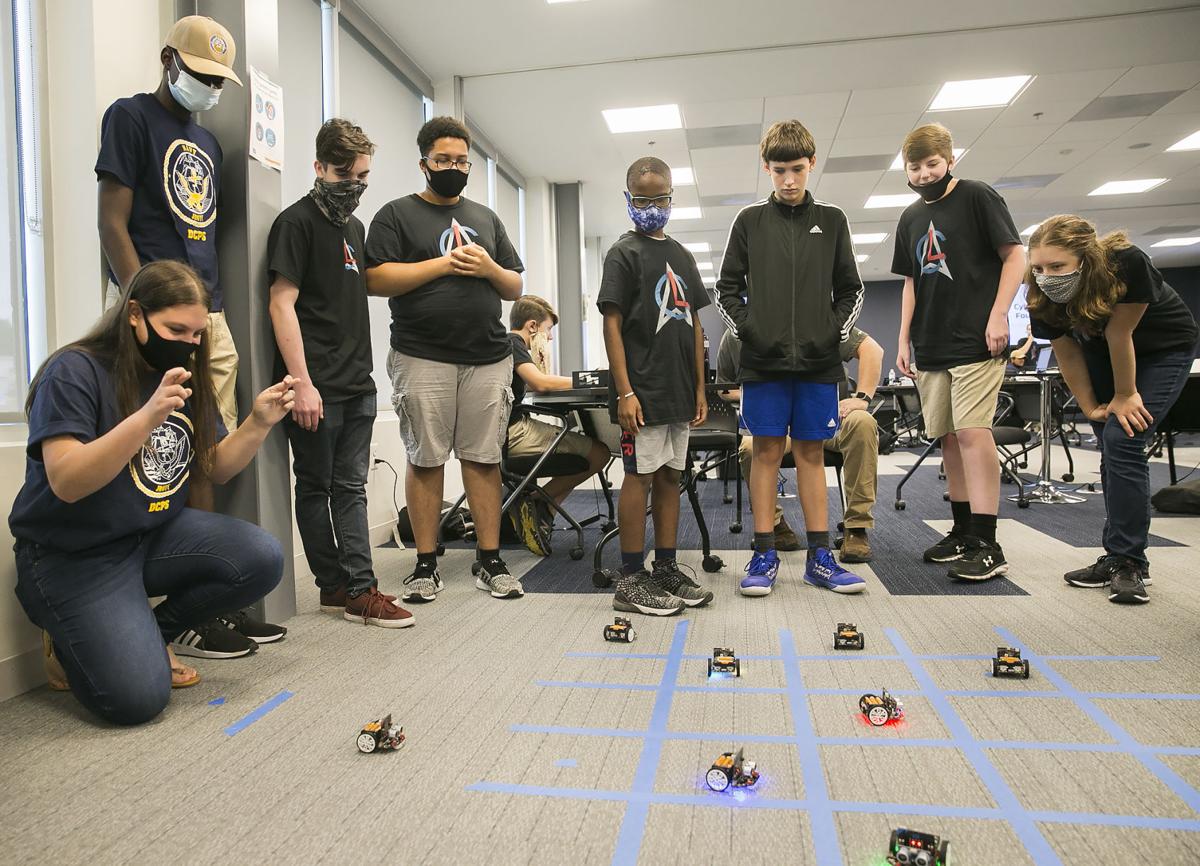 Alejandra Gibbs (left) releases her robot as other teens at the Cyber Bytes Foundation’s summer camp look on. The weeklong camp in Stafford taught programming and cybersecurity. 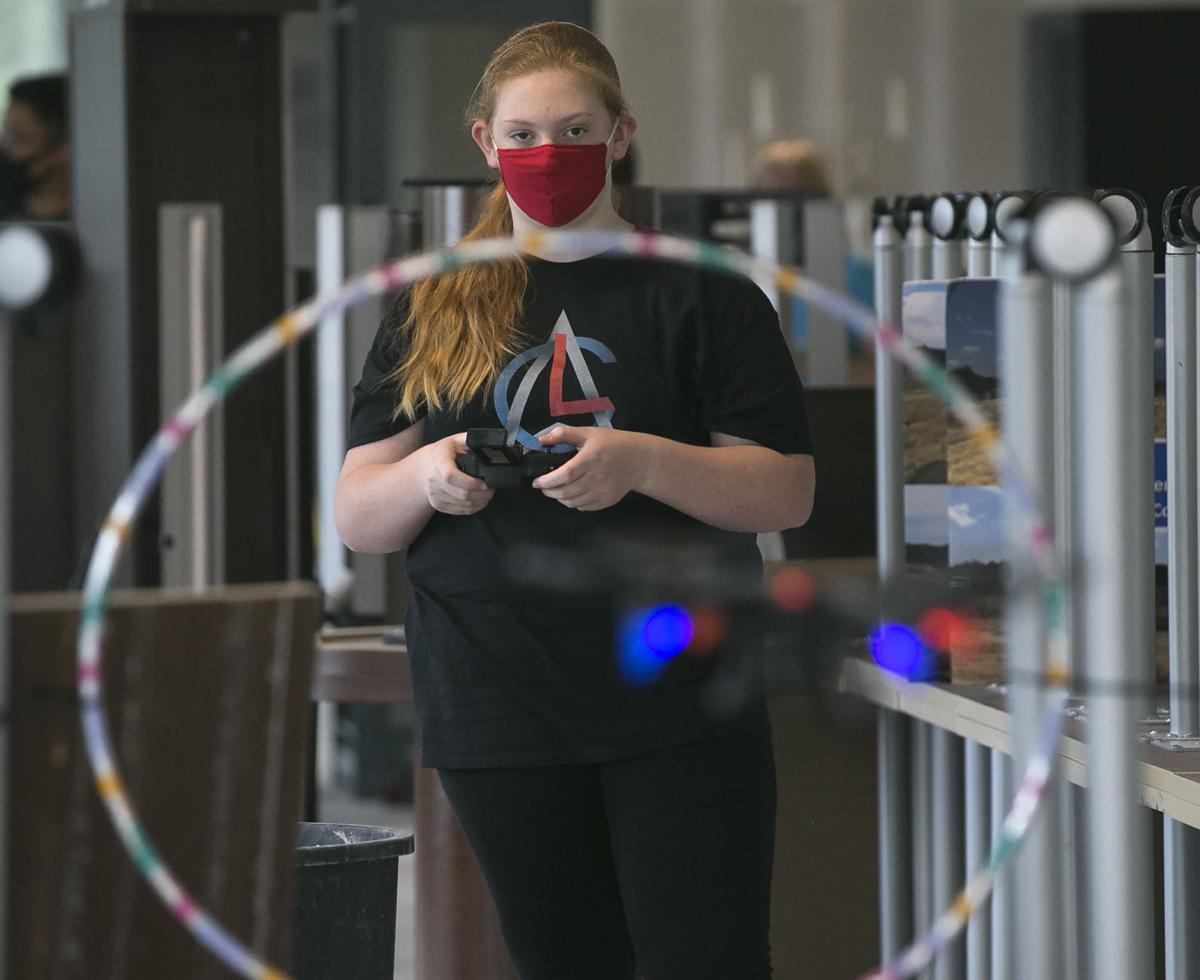 Blythe Sheppard of Stafford attempts to fly a drone through an obstacle course that included tables, trash cans and hoops. 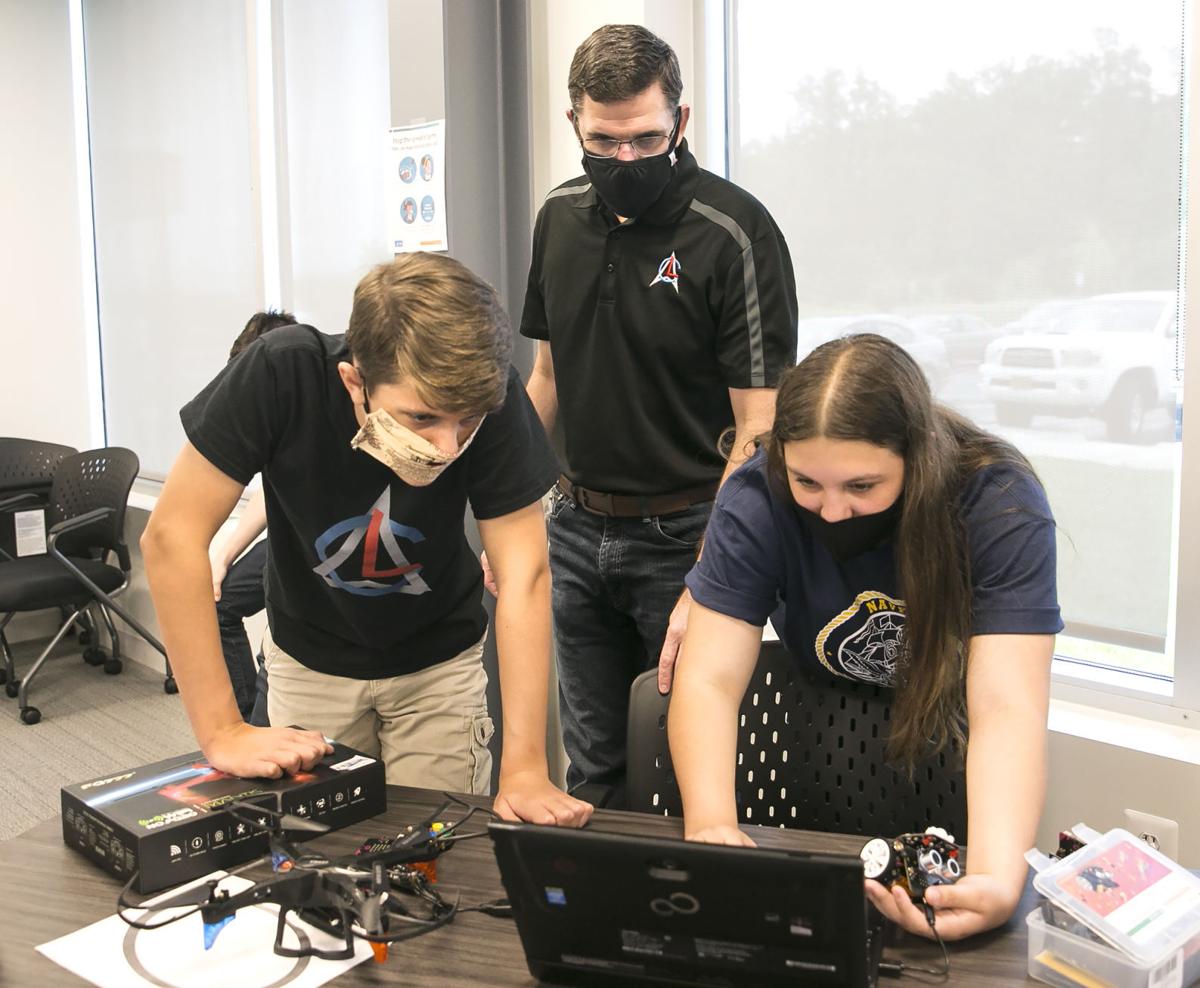 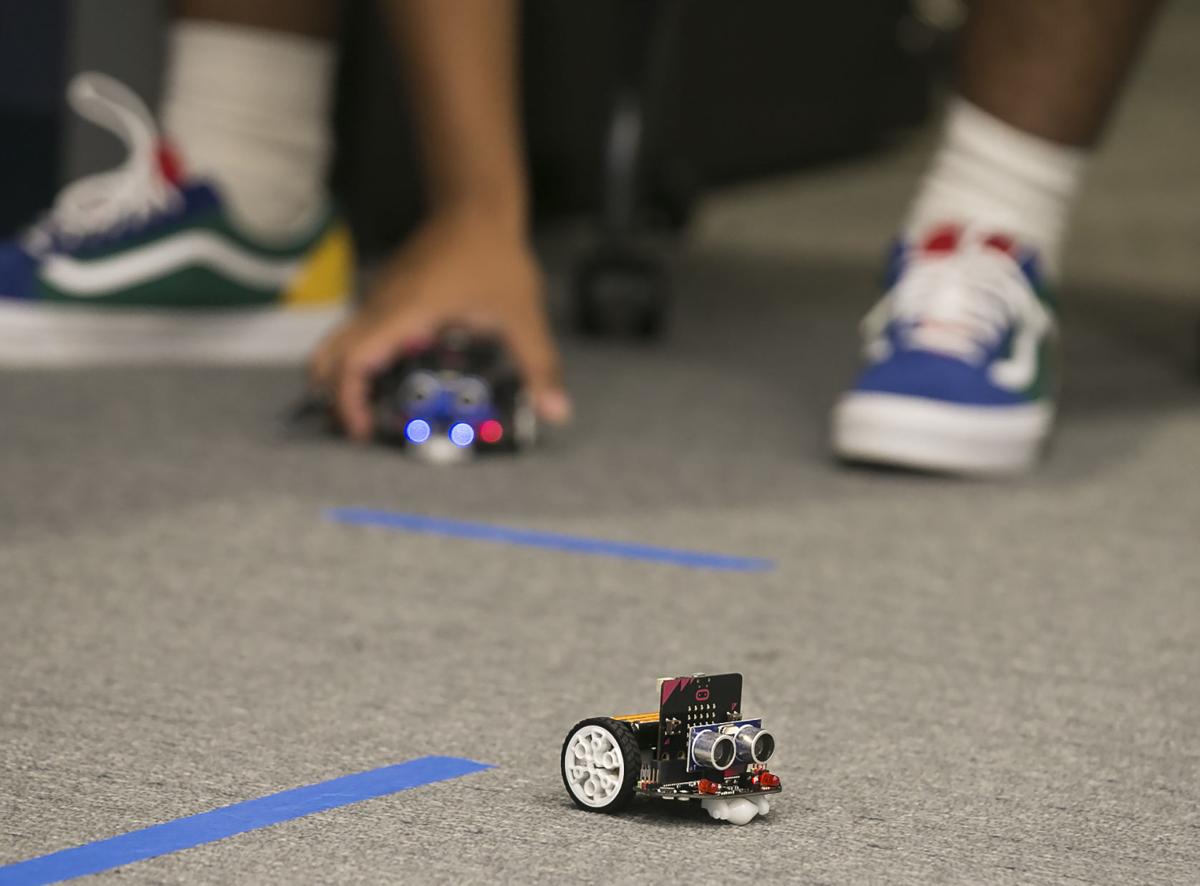 A robot veers off course during the summer camp for teens at the Quantico Cyber Hub.

Blythe Sheppard knelt behind a strip of blue tape, placed her small robotic car on the carpet and let it chug through a grid laid out on the floor.

It went straight, turned right and then went slightly wide of the square of tape where she’d programmed it to stop and blink its lights.

A few tweaks of the robot’s programming and its plastic wheels, and the rising Stafford County freshman was ready to join her 10 teammates in competing against the rest of the 21-member class at the American Cyber League’s junior summer camp at the Quantico Cyber Hub on July 31.

The students, who ranged in age from 13 to 17, had spent the morning fine-tuning the battery-powered robotic cars they’d assembled earlier in the week-long camp. Their goal was to send the little vehicles to specific spots within the grid faster than the other team. They yelled with delight when Joel Scharlat, the Cyber Bytes Foundation’s director of operations, clocked them at 5 minutes and 29 seconds.

That put them ahead, but they still had one more challenge. They had to troupe up to the unfinished third floor of the building at 1010 Corporate Drive and fly the drones they’d made through an obstacle course composed of tables, trash cans and hoops. If their total time for both challenges was better than the other team’s, they’d win.

The challenges added a level of excitement to the last day of camp, but the real purpose was to have the students have fun using the teamwork and lessons they’d learned about drones, robotics, cybersecurity and programing over the past four days, Scharlat said.

The summer camp was offered by the Cyber Bytes Foundation, a nonprofit whose mission is “to accelerate the development of a stronger cyber workforce and increase cybersecurity awareness within our communities through education, innovation and outreach,” according to the foundation’s Cybersecurity Career Guide. Both the foundation and the American Cyber League are located at the Quantico Cyber Hub.

The foundation was started by Cesar Nader, president and CEO of X Corp Solutions, and Brian DeMuth, CEO of GRIMM. Both companies do cybersecurity work and are located at the Quantico Corporate Center. They realized the need to interest people in the cybersecurity field and provide training because they were having a hard time finding qualified employees, said Matt Weaver, the foundation’s director of development.

The average starting salary for someone in the cybersecurity field who has security clearance and certification was $75,484 last year, yet Virginia alone has thousands of positions that are unfilled, he said. According to the 2019 Cybersecurity Workforce Study conducted by (ISC)2, there’s a nationwide shortage of nearly half a million skilled professionals to fill cybersecurity jobs.

American Cyber League began its first summer camp for teens in early July with 18 students from the Young Marines, a national youth leadership and service organization, who flew in from around the county. The second, which was held the last week in July, was advertised on social media and attracted students from Northern Virginia to Richmond, as well as several from the Junior ROTC program at Columbia Heights Educational Campus at Bell Multicultural High School in Washington.

“What we tried to do is put together a curriculum for them that goes across a bunch of different STEM activities,” said Scharlat.

The students first learned Python, a programming language, and then earned Federal Aviation Administration certification for building and flying a drone, which they got to do. The camps also covered the basics of artificial intelligence and how it applies to robots, and then students got to build and program the ones they used in the competition.

There was an introduction to defensive cybersecurity and hands-on exercises in a commercial-grade system. During lunch, they got to ask questions of such speakers as state Del. Josh Cole, Virginia first lady Pamela Northam and two people who work at GRIMM.

Etsub Kebede, a rising senior at Columbia Heights, said the camp was an amazing experience. She found out about it through Maj. Luke Wright, her JROTC instructor. She told him that she was interested in extracurricular activities during the summer, and he asked if she was interested in cybersecurity. She looked over the information he provided about it, and decided that she was.

Etsub said that she’d taken an honors engineering course her freshman year in high school, and got to help build and program a race car using Python in a summer camp in 2018. She’d thought about becoming an engineer, then considered studying to be a neurologist or neurosurgeon. Now, after being at the camp, she’s eyeing a career in technology, science or possibly cybersecurity.

Amat Guye, a rising junior who also participates in the JROTC program at Columbia Heights, said he’s thinking about what he wants to study in college, and the summer camp expanded his ideas of what he could become. He’s considering becoming a medical engineer, and said technology could provide new tools for such things as heart surgery and to help those with disabilities. He said he also enjoyed flying drones, and realized they could be useful in a variety of situations such as delivering food during a flood.

Blythe, who is homeschooled, normally spends four or five hours a day in dance practice and plans to open a dance studio one day. She’s also interested in STEM, and her parents found out about the summer camp on LinkedIn. While much of what she learned was fairly new to her, she said she really got into it and thinks what she learned would help with the business end of running a studio.

The Cyber Bytes Foundation got sponsors to help underwrite most of the summer camp’s costs, and the students got to take home the robotic cars and drones they made. Wright was able to get enough funding to cover the cost for Etsub and the other students from his JROTC unit, while the rest paid $250 each.

The foundation is seeking sponsors for its next summer camp, which will focus on 3D printing and be held next week. Participants will learn to assemble, operate, diagnose and repair a 3D printer, which they’ll get to keep. Registration is available at bit.ly/ACL3DP, and the fee is estimated to be $250.

The summer camps are just a small part of what is underway or being planned for the Quantico Cyber Hub, Scharlat said. The first floor of the three-story building is dedicated to cyber training and education, and the second floor is for cyber research and innovation. The third floor, which is still unfinished, will house cyber operations and support services.

“There’s nothing in the region like this,” Scharlat said.

The retired soldier drove to Orange twice to get the new title, tags and registration for the Ford Mustang he bought from his neighbor.

Alejandra Gibbs (left) releases her robot as other teens at the Cyber Bytes Foundation’s summer camp look on. The weeklong camp in Stafford taught programming and cybersecurity.

Blythe Sheppard of Stafford attempts to fly a drone through an obstacle course that included tables, trash cans and hoops.

A robot veers off course during the summer camp for teens at the Quantico Cyber Hub. 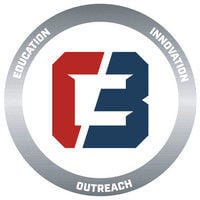