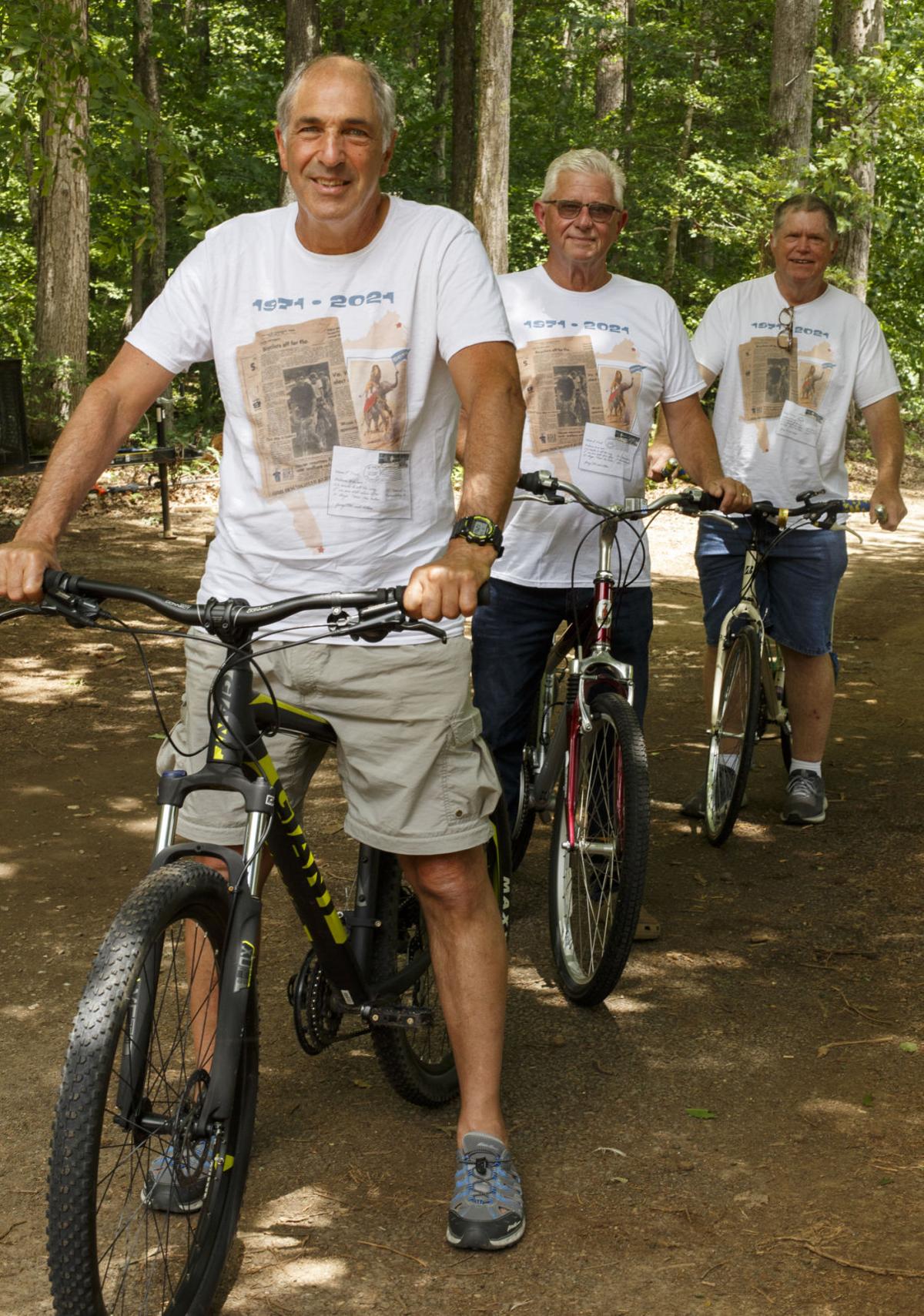 From left, Gary Klotz, S.M. Newman and Allen Townsend re-create a photo that ran in The Free Lance–Star before their 1971 bike ride to Miami. 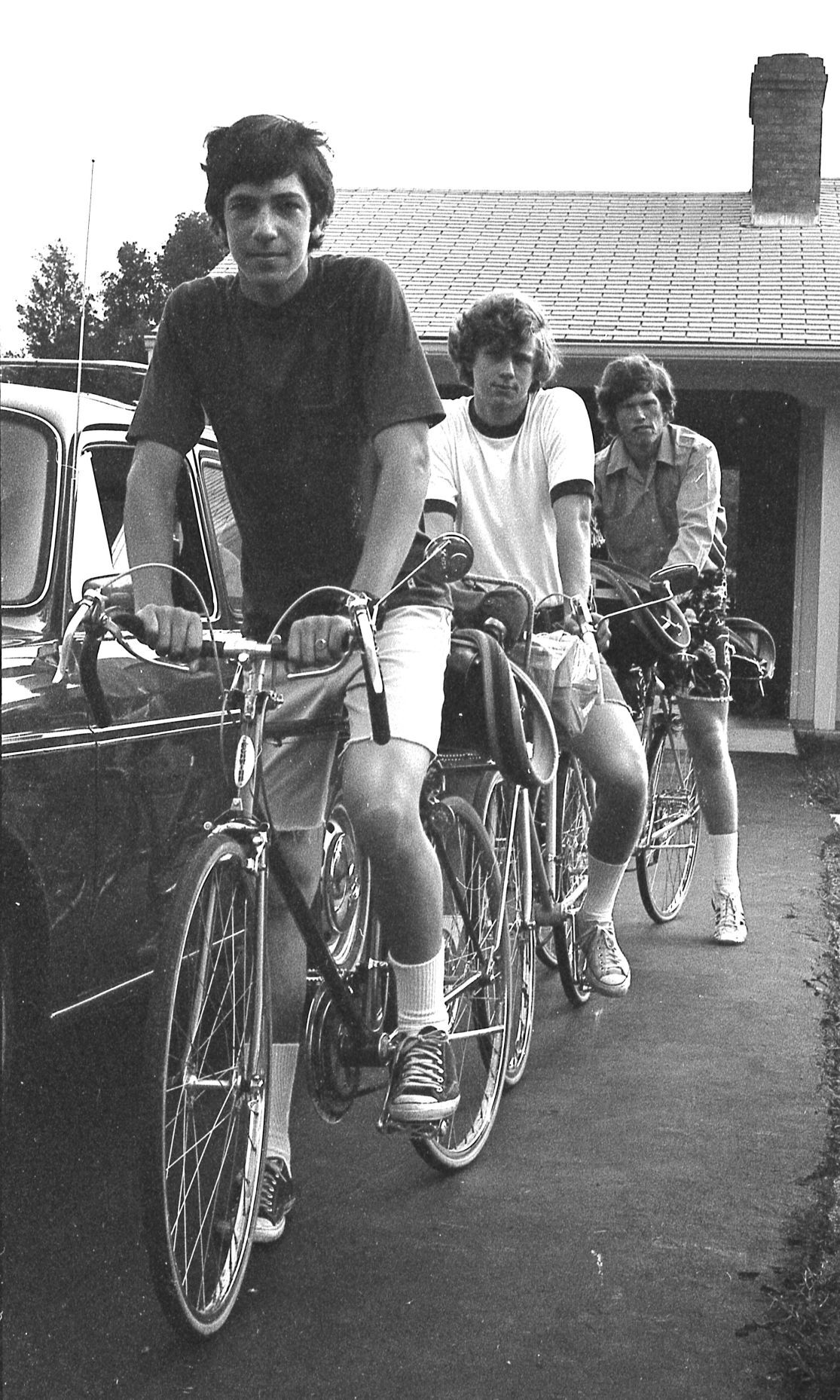 Local teens Klotz, Newman and Townsend pose for an FLS photo before their 1971 trek to Miami. 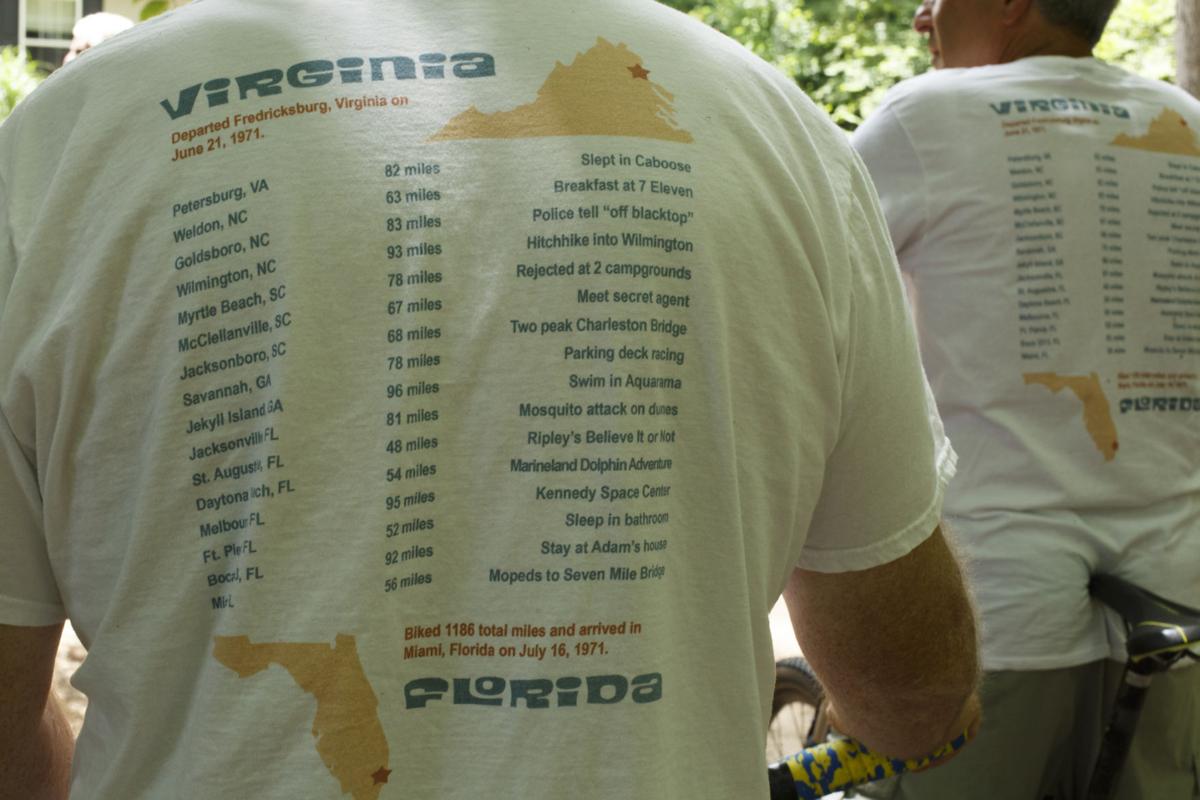 A T-shirt lists key stops and memories from the 1971 ride. commemorates the 50th anniversary of the 1971 bike ride the trio took from Fredericksburg to Miami in Stafford, Va. on Saturday, June 26, 2021. 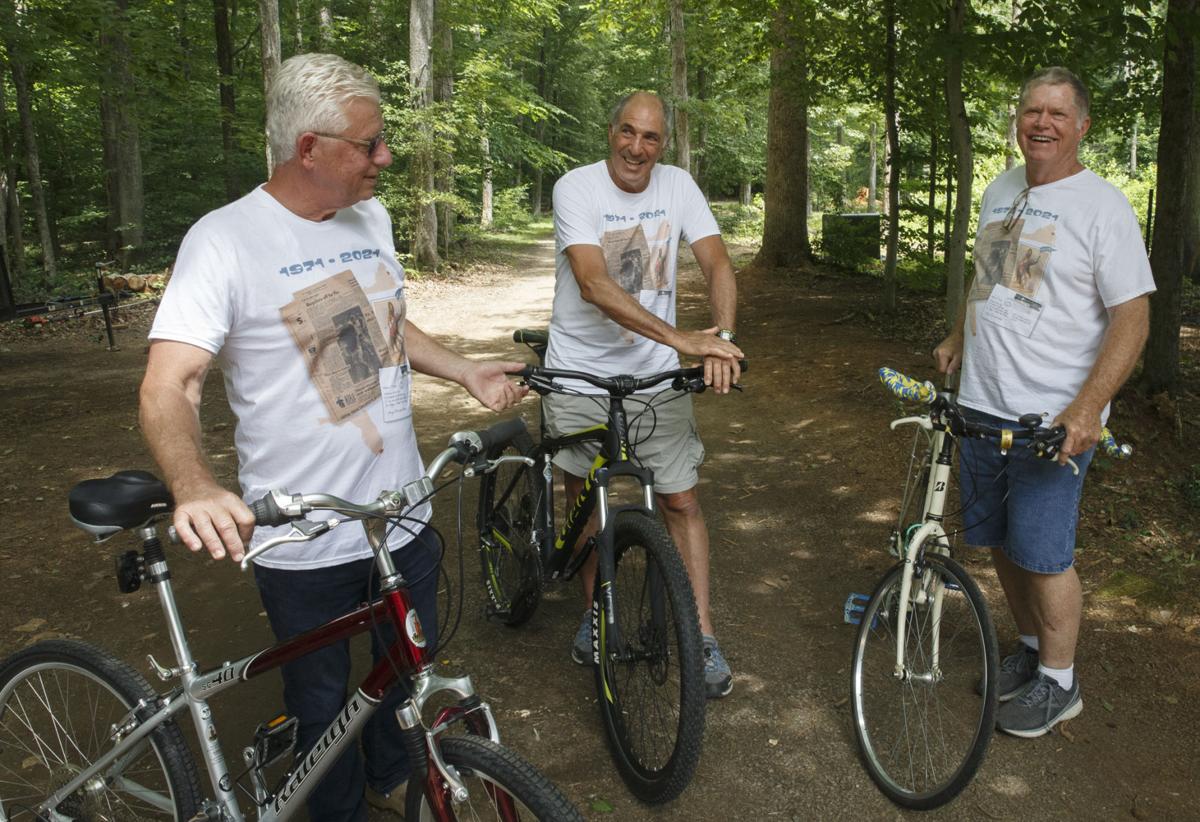 Friends (from left) S.M. Newman, Gary Klotz and Allen Townsend recall their 1971 bike ride from Fredericksburg to Miami during a reunion Saturday. 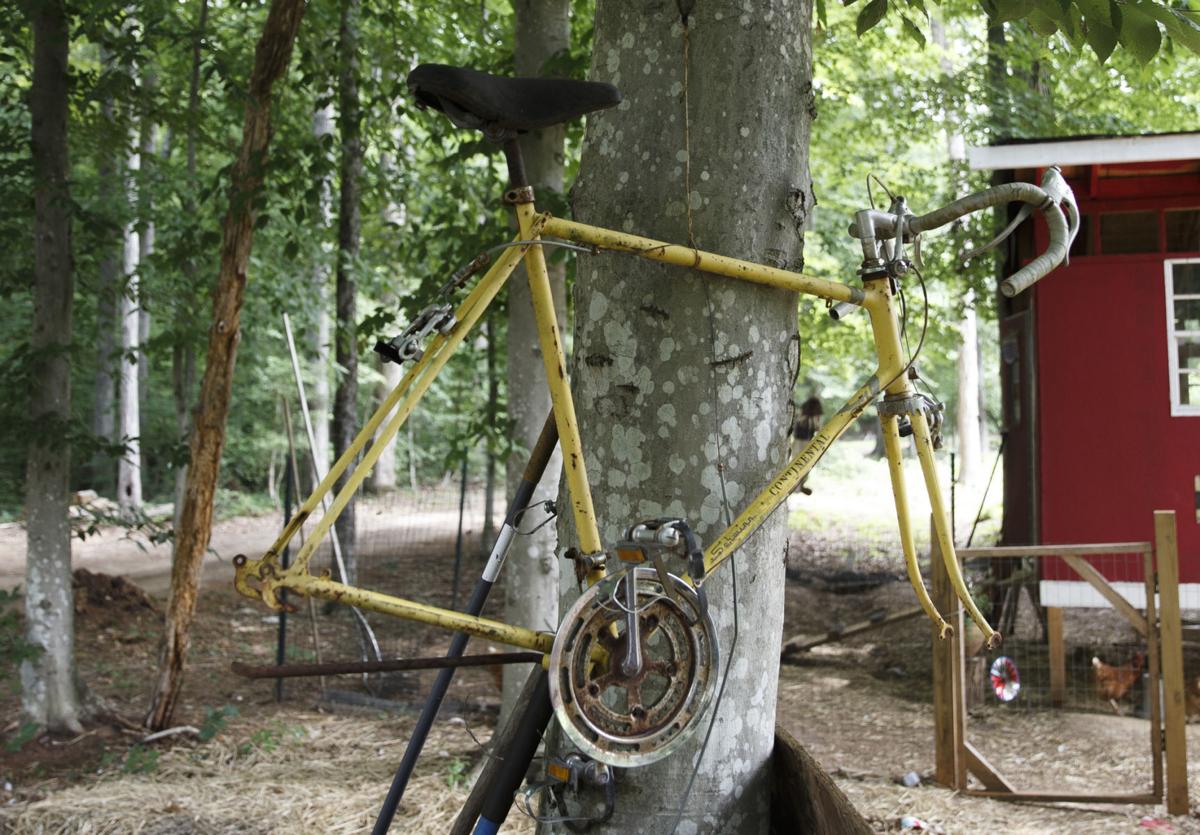 Newman adorned a tree outside his Stafford home with the only remaining parts of the bike he rode on the month-long 1,186-mile trip down the East Coast. 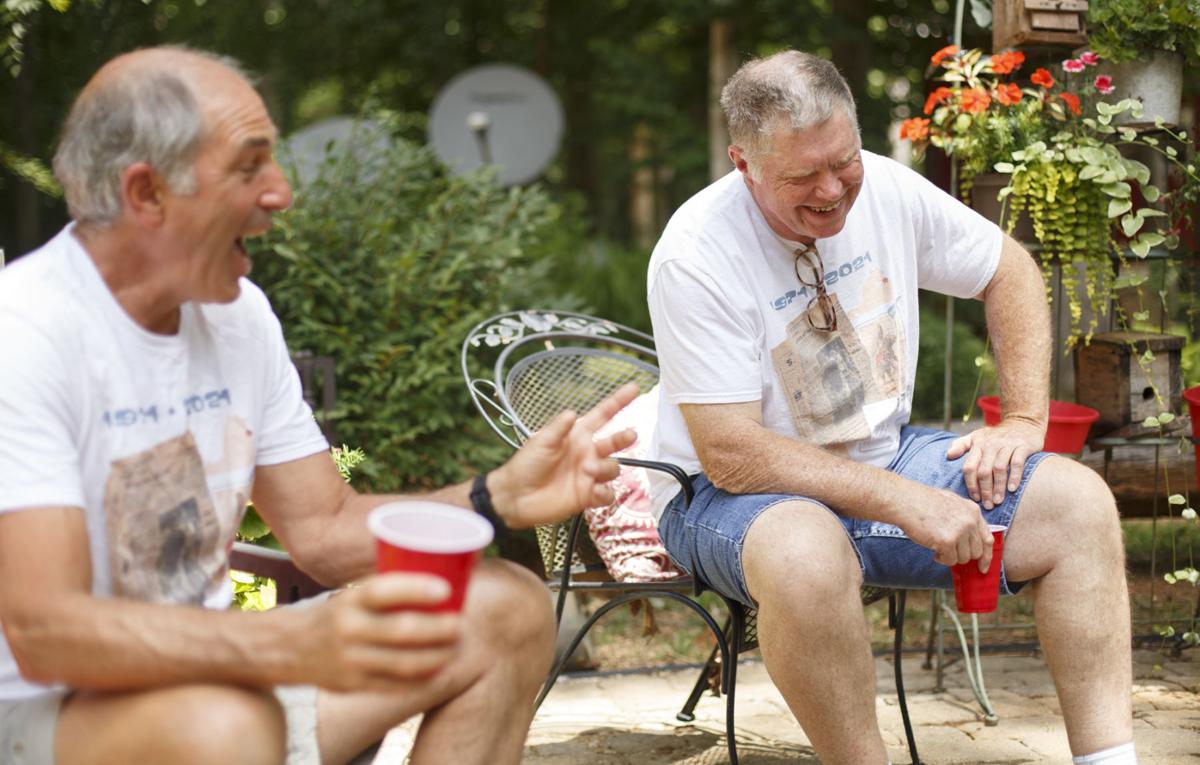 Townsend laughs as Klotz (left) shares a tale from their teenage trek. The trip was Townsend’s idea. 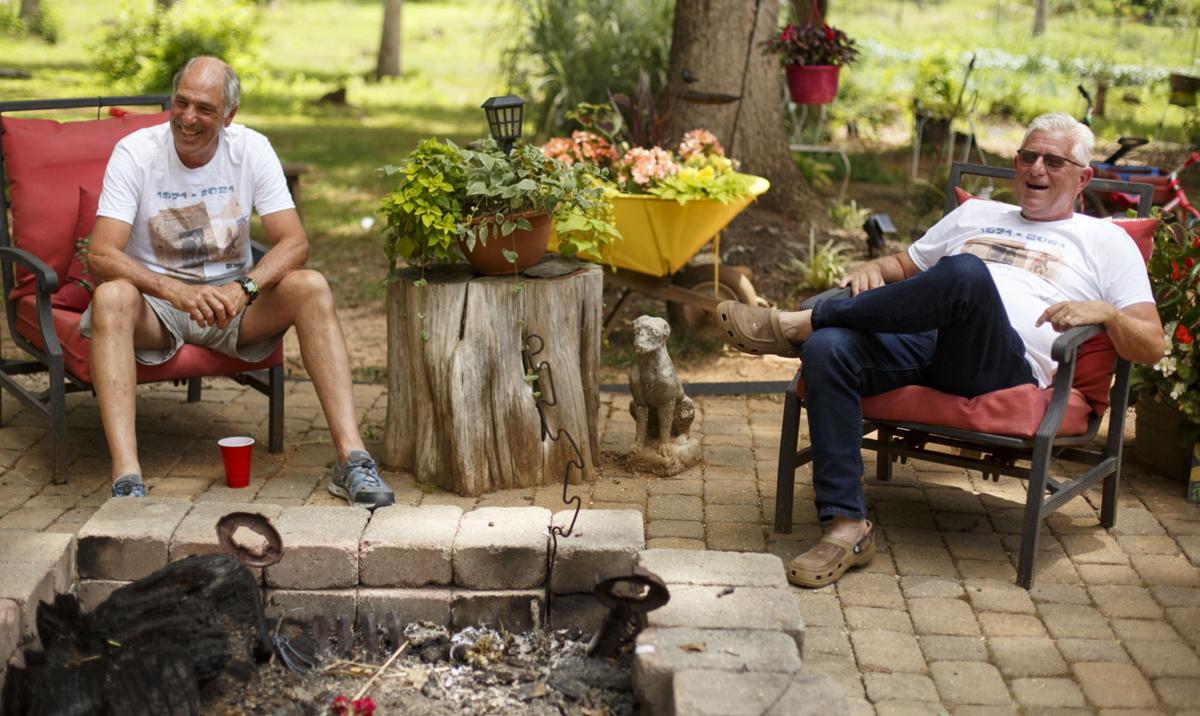 When they look back on the experience—of three teenage boys setting off alone on an adventure that spanned six states and 1,186 miles—they’re amazed by several things.

The memories they made. The sights they saw. The friendship that’s lasted a lifetime.

Oh, and there’s one more thing that comes to mind.

What the heck were their parents thinking in 1971, letting a 15-year-old and two 16-year-olds ride their bikes—ALONE—all the way from Fredericksburg, Va., to Miami, Fla.?

“It never occurred to me at the time, but looking back, we did all that and nothing bad happened to us,” said Gary Klotz, “the baby of the group” who’s now 65 and lives in Colorado. “Nobody had a major crash. Nobody had to go to the hospital. Nobody tried to kidnap us.”

Good outcomes, all the way around.

Clearly, times were different in June 1971 when S.M. (Sam) Newman IV, Allen Townsend and Klotz set off from Fredericksburg on what The Free Lance–Star described at the time as a “Trek for teenagers.”

The three recently gathered in Cape Charles, on the Eastern Shore of Virginia, to celebrate the 50th anniversary of their adventure. Their week included a bike ride around Chincoteague Island and other sightseeing excursions, then they met at Newman’s house in Stafford County to be photographed by the newspaper for the second time in five decades.

A lot of details from their original trek have been lost to time, but from what the men can remember, not much forethought went into it. Townsend had been camping at Myrtle Beach, S.C., a few years earlier and wanted to do something cool that would set him apart from his friends.

He asked his buddy Newman if he’d like to ride bikes to the same beach, and Newman invited his friend Klotz to come along.

The trio decided to go all the way down the East Coast to Miami. Each had $300 in traveler’s checks and minimal gear: basic bike-repair tools and a Boy Scout tent, sleeping bags and a few changes of clothes.

“We never thought about any danger that might be involved,” Newman said, adding that when he told his parents goodbye, “My mom said, ‘See you later.’”

Townsend, who lives in Richmond, had a paper map and a basic idea of where they’d end up if they rode for 60 or 70 miles each day. He also kept a notebook and chronicled some of the high points—at least those that were suitable reading for their parents. For instance, he noted the group had gone swimming with others, but didn’t say they were skinny-dipping. Instead, he wrote down “N” for nude.

The teens were gone for a month and rode for 16 of the 30 days. On days they biked, they averaged 74 miles a day and believe the longest jaunt covered 105 miles.

On the first day of the trip, the three tried to spend the night in a caboose in Petersburg after riding 82 miles and Klotz having the one and only flat tire of the whole trip. Mosquitoes got so bad that they had to flee to a nearby motel. The clerk let all three stay for $8, provided they were out by 8 the next morning.

It wouldn’t be the first time they were run off by biting bugs. Camping on a sand dune in Jacksonville, Fla., proved to be as bad an idea as sleeping in a train car.

There seemed to be more campgrounds in those days, the men said, so they regularly stopped there or the occasional motel. They guessed they must have worn the same clothes for days on end because no one carried more than a pillow-sized backpack of belongings.

They all bore the smell of the road until they took the occasional shower. The first one who came out clean would then get a whiff of the others and announce: “You guys stink,” Klotz said.

In Goldsboro, N.C., a policeman told them to stay off the blacktop and on the dirt shoulder along U.S. 1. They did until he was out of sight, then got back on the pavement.

In order to do some sightseeing in Wilmington, N.C., they hitchhiked—another element of the past as rare today as paper maps and the pay phones on which they called home every three or four days.

The three didn’t just camp and swim, including a dip in the Aquarama, a heated indoor pool on Jekyll Island, Ga. They took in the local history and culture with tours of Charleston, S.C., and St. Augustine, Fla., and stops at the Kennedy Space Center and Ripley’s Believe It or Not museum.

“I think we had a good appreciation of what we saw,” said Newman, who went on to become an English teacher.

Somehow, the three teens packed in all those attractions and campground fees, stops at McDonald’s and pancake houses on $300 a person—money they’d made and saved from their jobs. Klotz worked in his grandfather’s scrapyard, Newman did surveying work and Townsend cut grass.

The three planned to take the train home from Miami, so each had to make sure there was money for tickets as well.

“We ended up having very little left, and we ate a lot of peanut butter and bread,” said Townsend, who remembered he’d also bought a log of bologna that was never put in the refrigerator.

The teenagers never asked for more money from home or for help along the way. Looking back, the three believe the adventure shaped the men they became.

“It created determination and perseverance in us and it helped us grow as people, I think,” Newman said.

The trio has remained friends over the years, even though there were times, in college and when their families were young, that there wasn’t much time for phone calls or get-togethers. They’ve had more reunions this century and are planning other adventures, either in five or 10 years.

“I think the trip was kind of like glue in a way,” Townsend said. “It held us all together.”

From left, Gary Klotz, S.M. Newman and Allen Townsend re-create a photo that ran in The Free Lance–Star before their 1971 bike ride to Miami.

Local teens Klotz, Newman and Townsend pose for an FLS photo before their 1971 trek to Miami.

A T-shirt lists key stops and memories from the 1971 ride. commemorates the 50th anniversary of the 1971 bike ride the trio took from Fredericksburg to Miami in Stafford, Va. on Saturday, June 26, 2021.

Friends (from left) S.M. Newman, Gary Klotz and Allen Townsend recall their 1971 bike ride from Fredericksburg to Miami during a reunion Saturday.

Newman adorned a tree outside his Stafford home with the only remaining parts of the bike he rode on the month-long 1,186-mile trip down the East Coast.

Townsend laughs as Klotz (left) shares a tale from their teenage trek. The trip was Townsend’s idea.