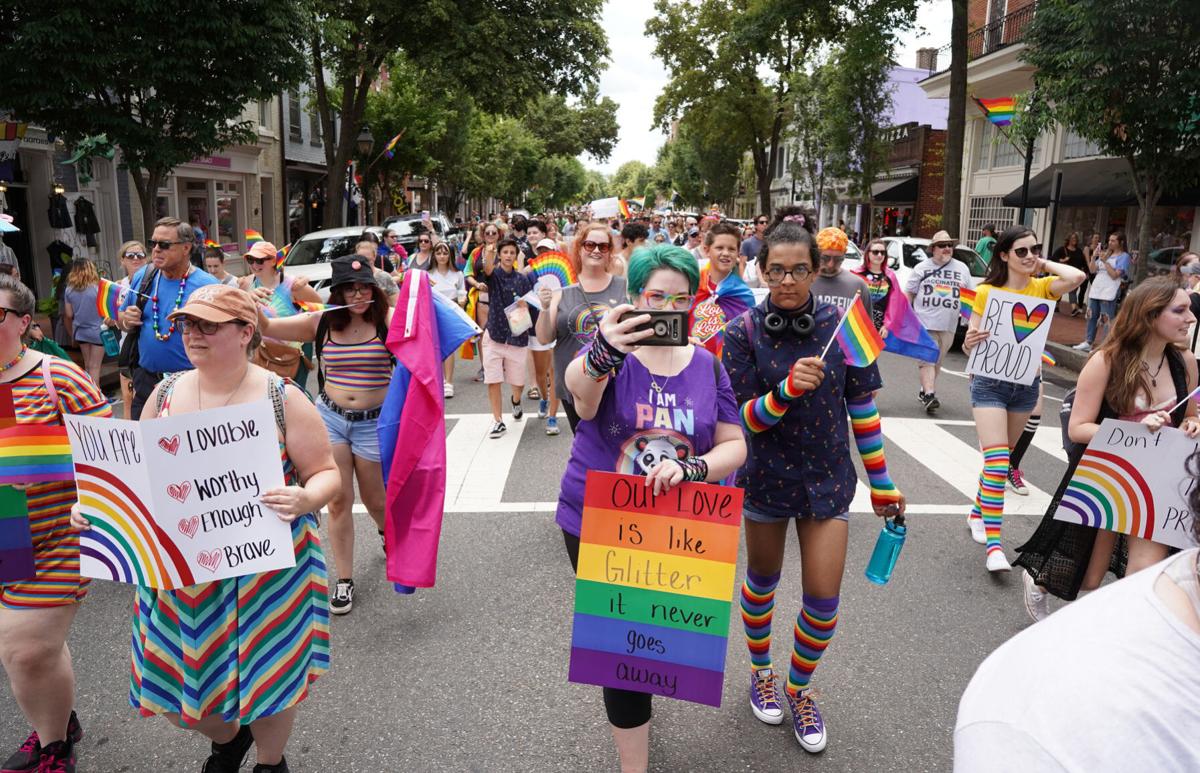 The Fredericksburg Pride event kicked off Saturday morning with a festival in Maury Park, followed by a parade with several thousand marching along Caroline Street in Fredericksburg. 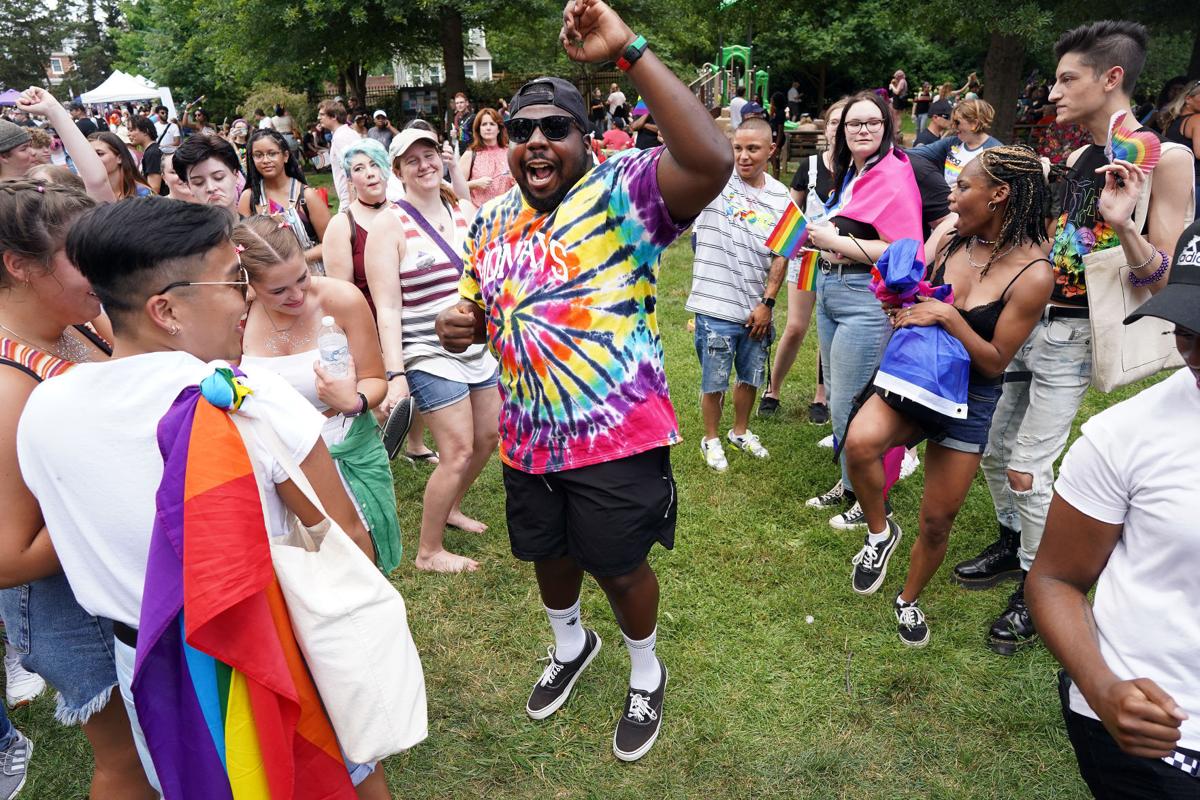 Charles Castelly (center) dances with the crowd at the Pride event at Maury Park on Saturday. 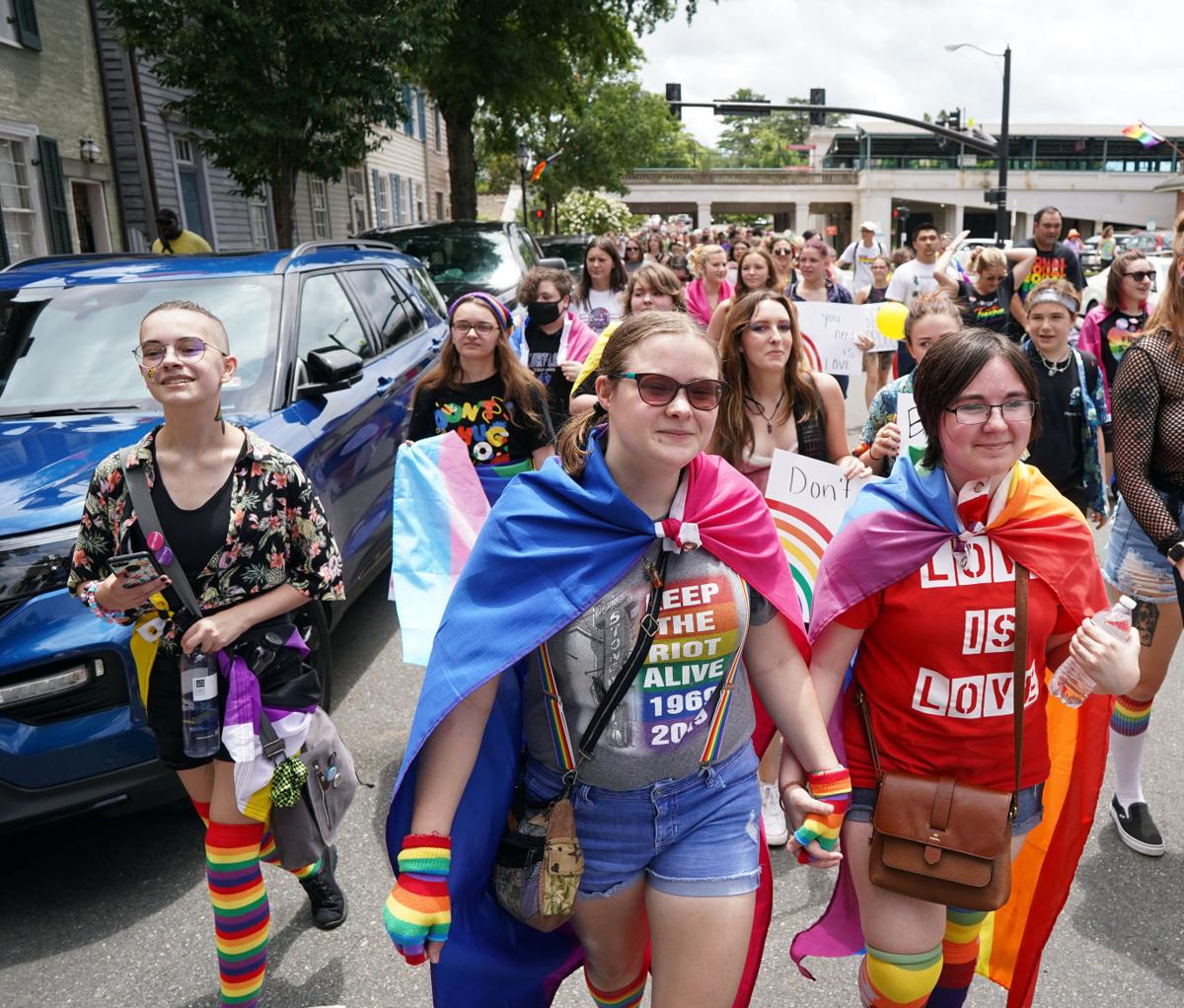 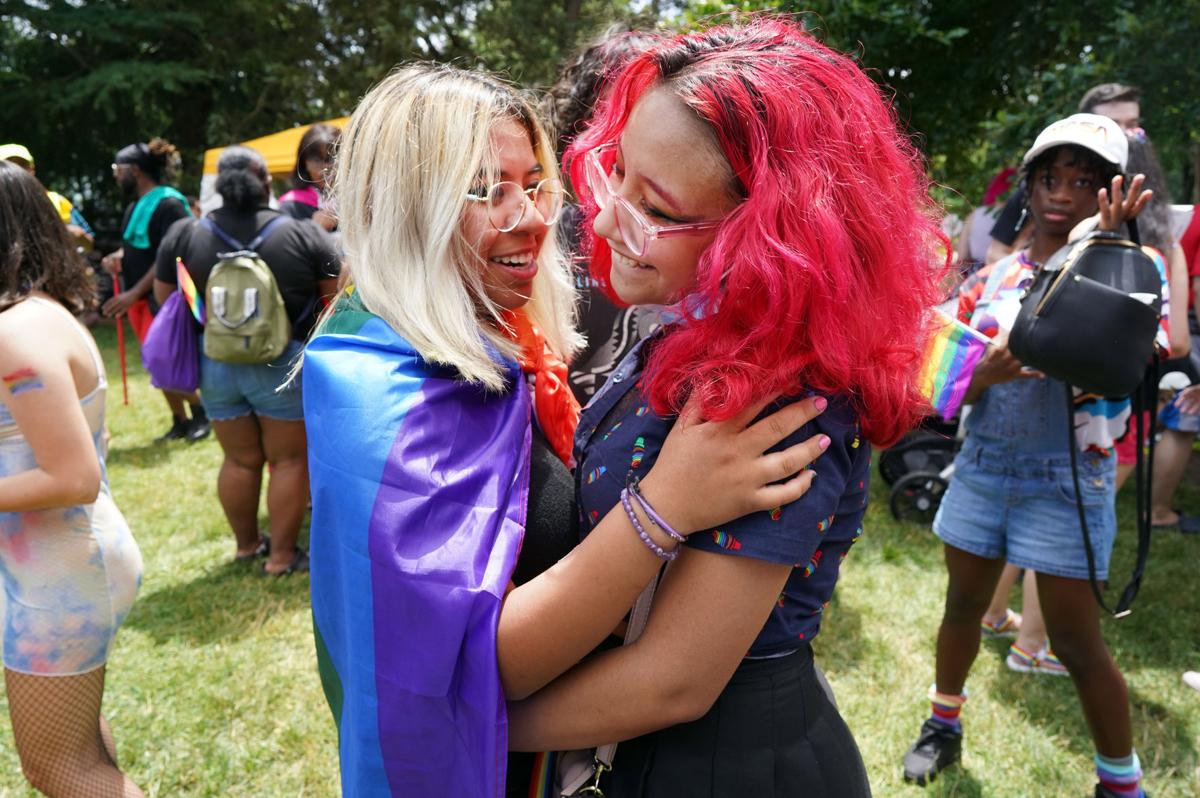 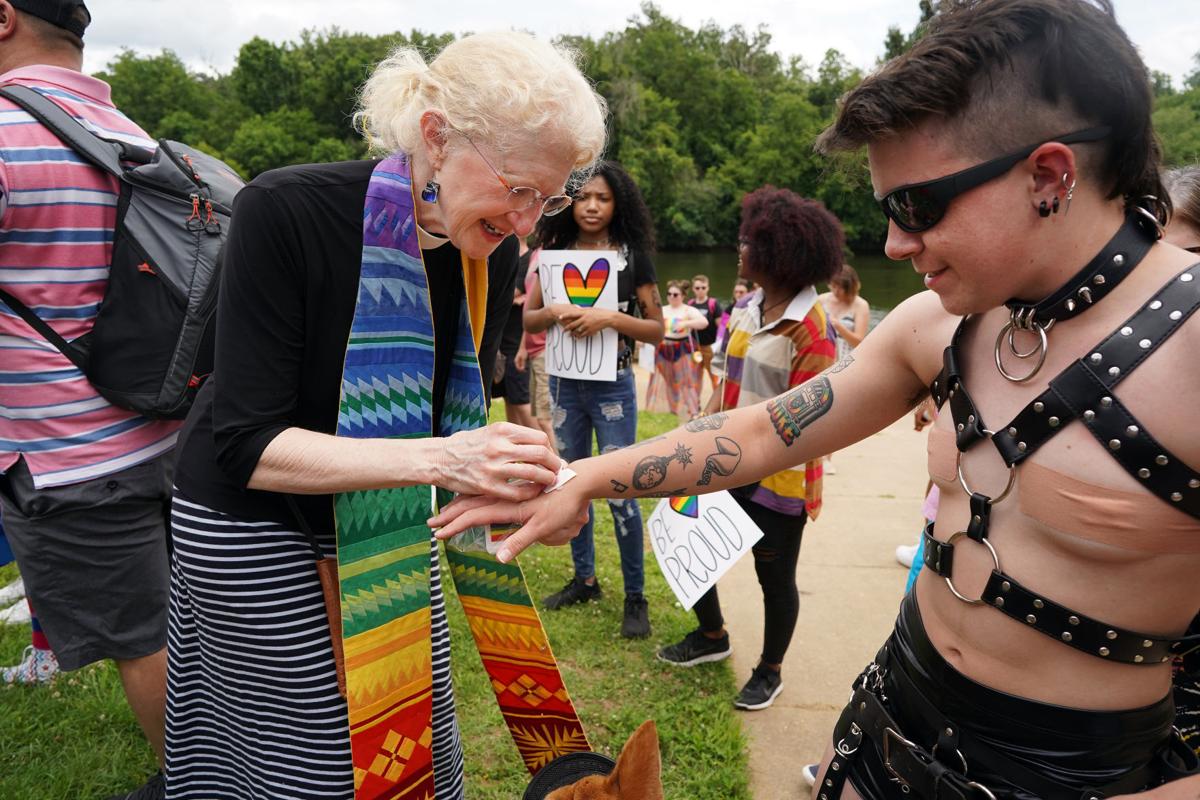 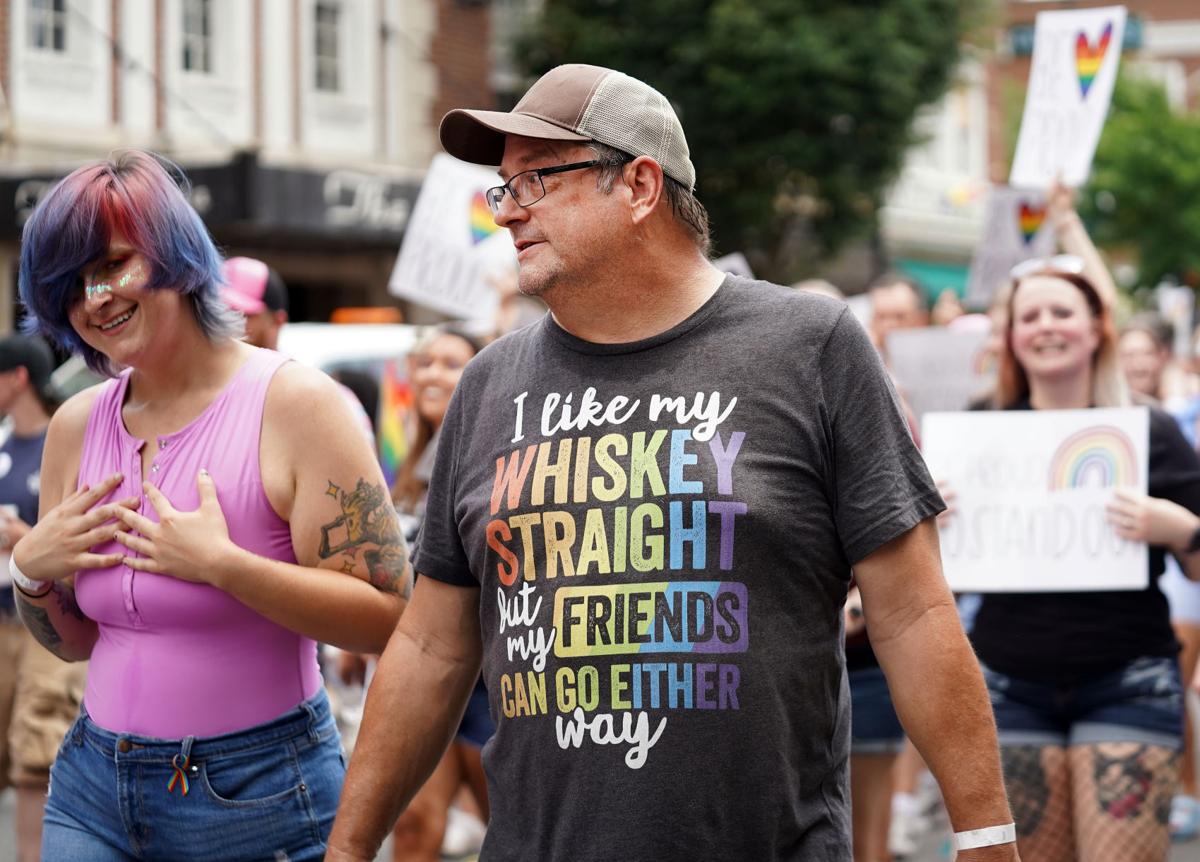 Friends and family members also marched in the Pride parade along Caroline Street to support them. 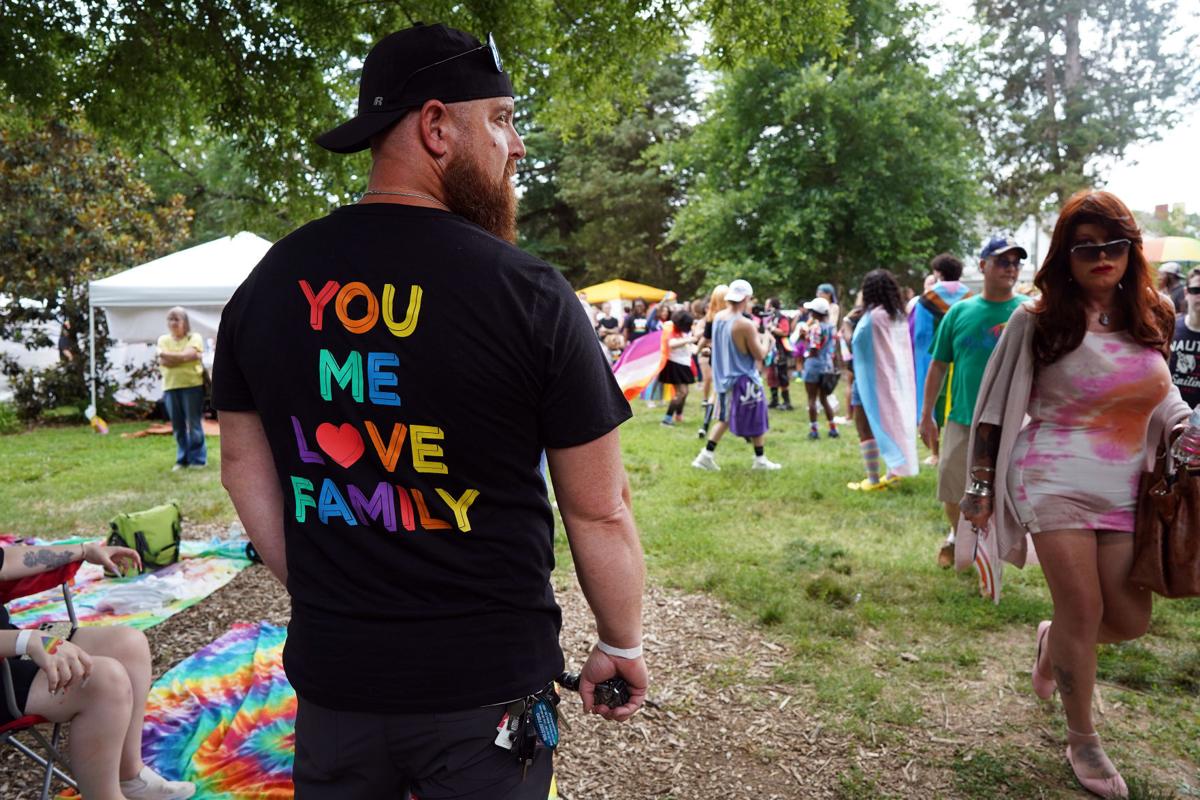 People attend the Fredericksburg Pride event to support their children and other family members. 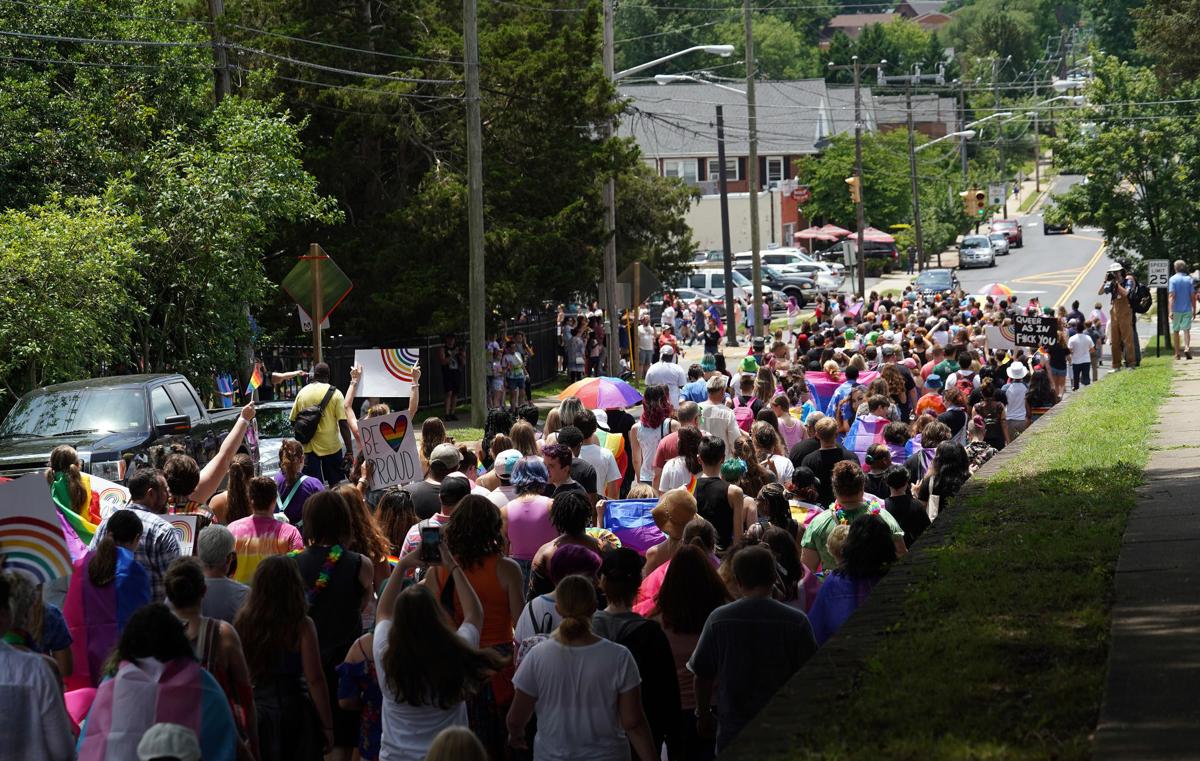 Rainbows were everywhere in downtown Fredericksburg on Saturday.

June is Pride Month, when LGBTQ communities around the world celebrate the freedom to be themselves, honor those who struggled and died for that freedom and advocate for greater acceptance going forward.

“We just want to give the community information about who we are,” Henry said. “Everybody knows someone in the LGBTQ community, whether or not they know they do.”

The Pride event started at 10 a.m. with a festival in Maury Park, with vendors, entertainment and booths providing information and resources for the LGBTQ community.

“Growing up here in Fredericksburg, we didn’t have this,” Henry told the masses of people—those who identify as LGBTQ and their allies—assembling for the march. “There has been a lot of change. There is a lot of love and a lot of support. But there’s more work to do.”

Henry introduced guest speaker Quinn Fontaine, a transgender actor and comedian. Fontaine spoke about being seven years into his transition from female to male.

Fontaine also introduced his mom, Nancy Cook, whom he called “his number one fan.”

“I’ve also been her number one challenge,” he said. “But now, all of her friends have reached out to her to ask, ‘How do I love my LGBTQ family member?’”

Cook told the audience that she asked herself a simple question.

“I thought to myself, ‘I loved him before, why don’t I love him now?’ she recalled. “And it was that simple.”

As the parade started, organizers asked participants to stay on the right side of the street—but by the time the parade reached Caroline Street, it had spilled into both sides with no resistance.

Cynthia McKenna, rector at Trinity Episcopal Church on College Avenue, marched with members of her congregation.

“The Christian church in general has been very hard on the LGBTQ community,” she said. “We are trying to set that right. God loves everyone and we believe in equality and inclusion.”

Broadway Harris, one of the event’s organizers, told those marching that their ability to be proud of themselves could be an inspiration to those who are still scared.

“When you get to be yourself, you can breathe easier,” he said.

The Fredericksburg Pride event kicked off Saturday morning with a festival in Maury Park, followed by a parade with several thousand marching along Caroline Street in Fredericksburg.

Charles Castelly (center) dances with the crowd at the Pride event at Maury Park on Saturday.

Friends and family members also marched in the Pride parade along Caroline Street to support them.

People attend the Fredericksburg Pride event to support their children and other family members.