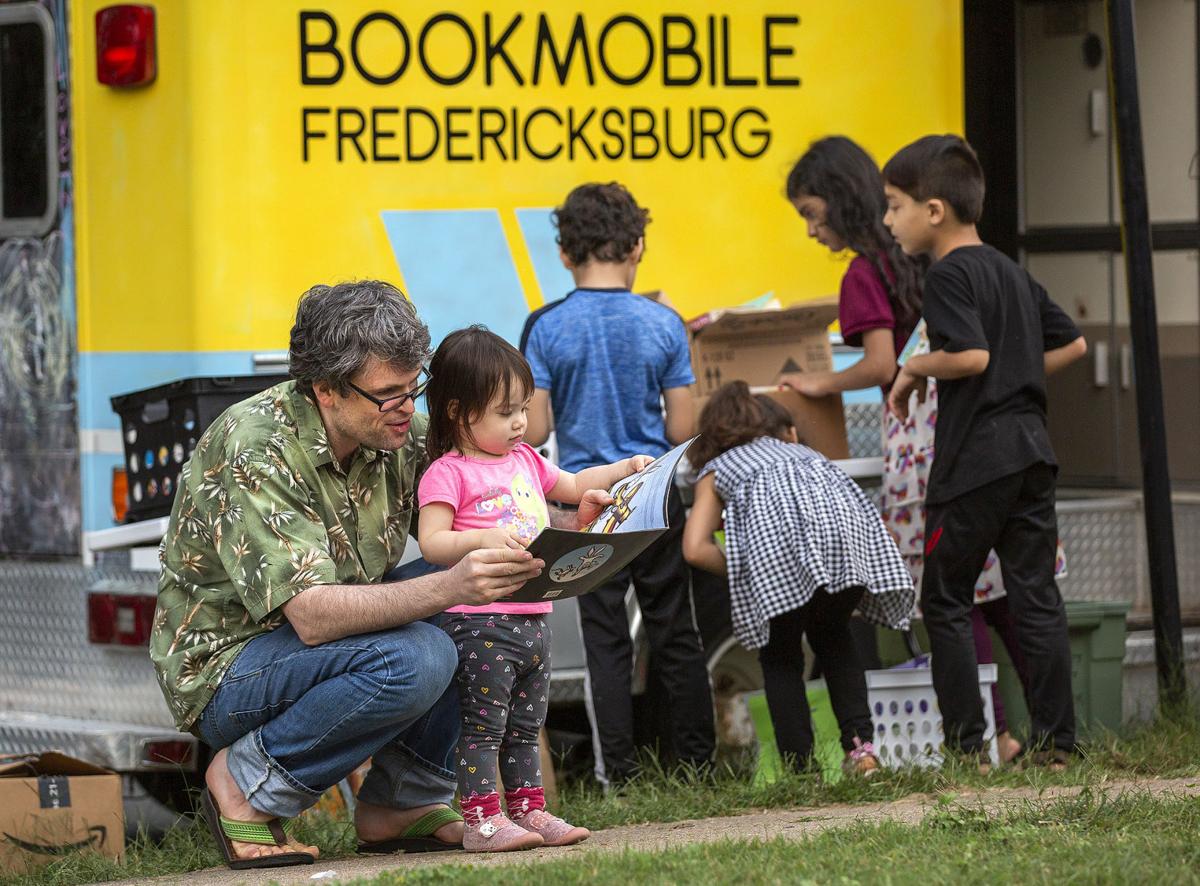 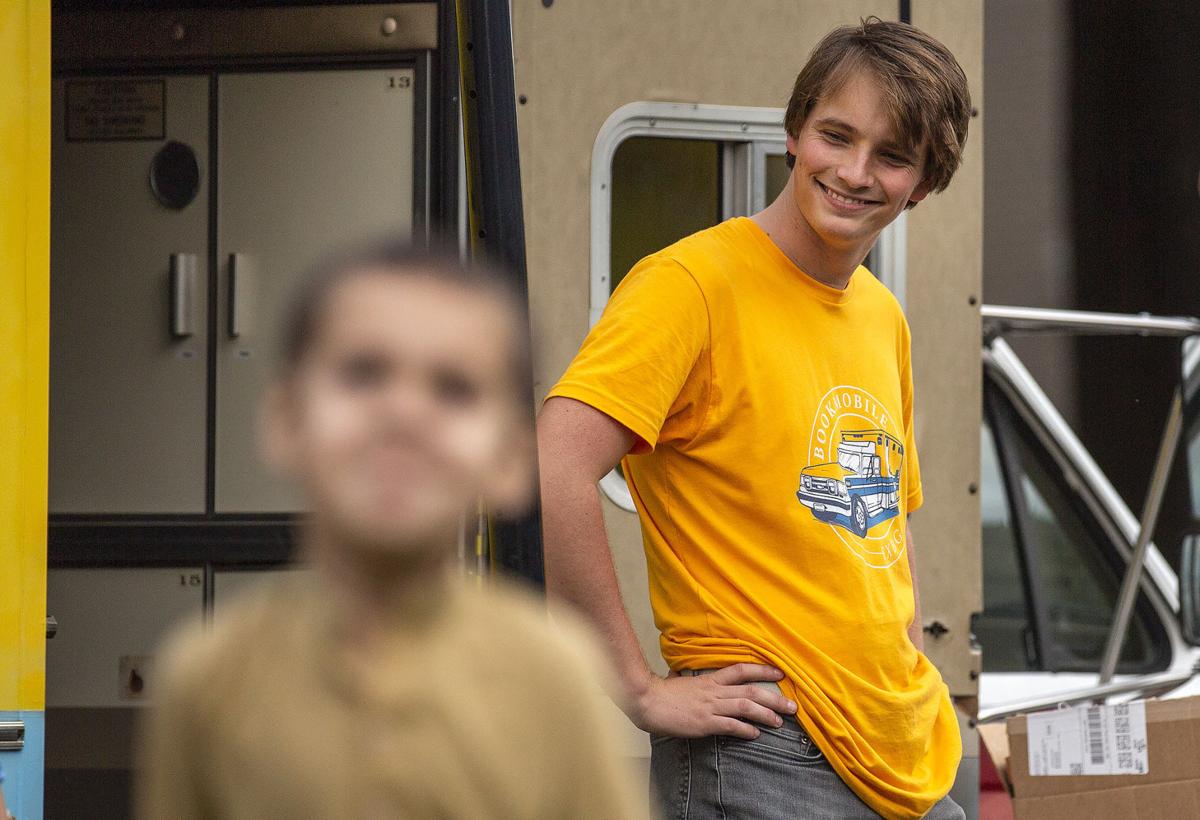 UMW student Hollis Cobb converted a 1989 ambulance into a bookmobile to distribute free books to kids. 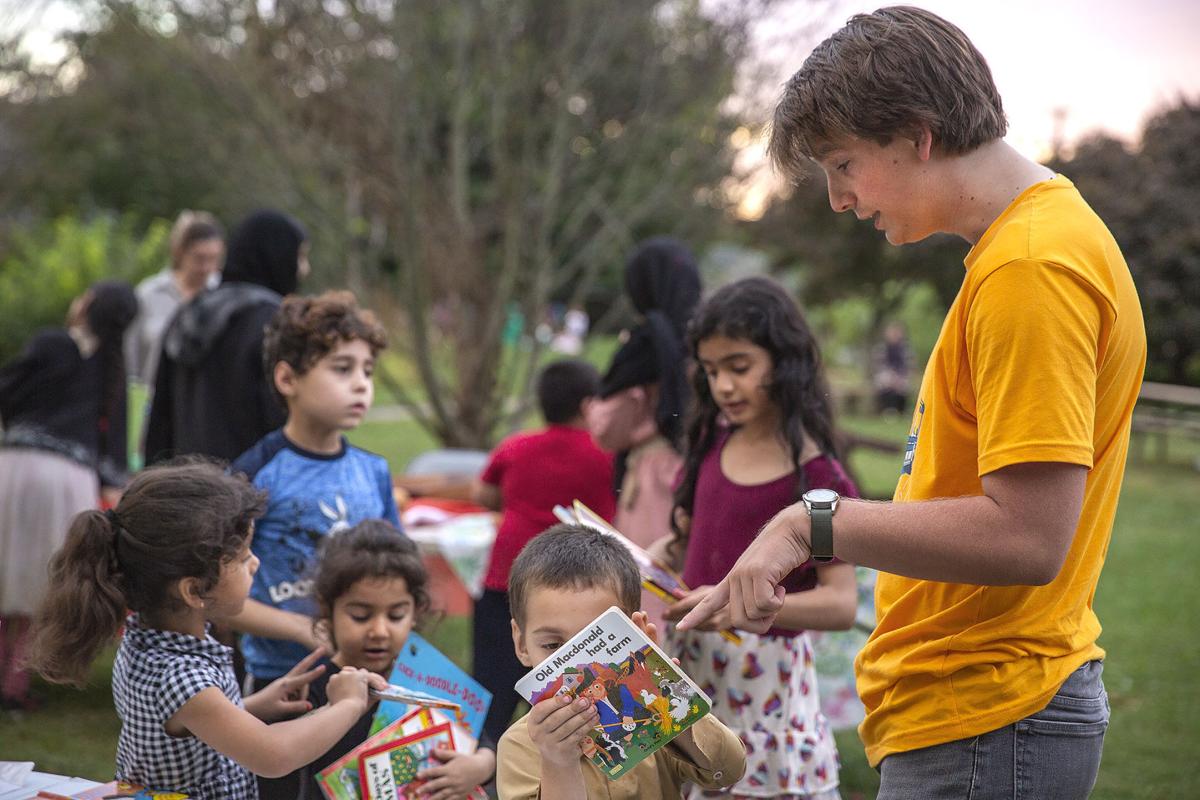 Bookmobile Fredericksburg creator Hollis Cobb makes a stop at Downtown Greens recently. He goes there every Thursday to give books to children.

The bookmobile not only provides free books to children in the community. It also offers free Wi-Fi and kids can do chalk art on its back doors.

When Hollis Cobb was a child, one of his favorite books was Richard Scarry’s “Busy, Busy Town.”

Instead of TV time, his “never super technology-oriented” family had “look-at-books time,” said Cobb, now a junior English major at the University of Mary Washington. He recalls spending hours with Scarry’s animal characters as they visit the post office, service station, hospital, school and other parts of their busy community.

It’s possible that “Busy, Busy Town” laid the groundwork for Cobb’s current project—the Bookmobile Fredericksburg, a nonprofit mobile library that aims to promote literacy and a love of reading in this area.

“It’s a nice blend of everything I care about,” Cobb said—books, antique vehicles and community service.

The bookmobile is a renovated 1989 Ford ambulance filled with books for all ages and reading levels. Books are free for the taking and there is no obligation to return them.

“I want to promote literacy in the area and that means making books as accessible as possible,” Cobb said.

Starting this fall, the bookmobile has been at the downtown Fredericksburg Farmer’s Market at Hurkamp Park every Saturday morning, at the Idlewild Village community center every Sunday afternoon and at the Downtown Greens farm stand every Thursday evening.

Neighborhoods and organizations can also reserve the bookmobile for events such as birthday parties, block parties and fundraisers.

The Bookmobile Fredericksburg was a summer project for Cobb. Last spring, he sold a car and found himself with some extra money, and he thought, “Let’s do something for the greater good.”

The 1989 Ford ambulance was listed for sale on Facebook marketplace. Cobb bought it and began turning it into a mobile library.

The ambulance had been used as a support vehicle on a racetrack and it was covered with stickers.

“So the first thing I had to do was de-sticker it,” Cobb said. “Then I did a deep clean inside, put down new carpeting, made repairs to the roof and ceiling and installed new shelving.”

Cobb put “a fair amount” of his own savings into the renovation process. To fill the bookmobile, he sought donations of books from the community, both locally and in his hometown of Richmond, and the community came through.

Though adult books are available, the bookmobile’s primary audience is children and young adults, Cobb said.

It’s an immersive experience. Free Wi-Fi is available in the bookmobile and kids can climb inside and open up cabinets. Cobb said their faces light up when they’re told all the books are free.

“I love the feeling of books,” said Cobb, who hopes to become a high school English teacher upon finishing his master’s program in education at UMW. “There’s never been a time when I didn’t love reading, and my favorite thing is when the bookmobile brings that joy to families.”

He is working on obtaining nonprofit status and putting together a board of directors. He would also like to assemble a focus group of local educators to help him figure out how the bookmobile can serve the needs of local students.

To reserve the bookmobile, or make a donation, visit bookmobilefxbg.wordpress.com.

Neighbors feared the impact the tower would have on their quiet neighborhood, but county officials said the area is a "dead zone" in terms of connectivity.

UMW student Hollis Cobb converted a 1989 ambulance into a bookmobile to distribute free books to kids.

Bookmobile Fredericksburg creator Hollis Cobb makes a stop at Downtown Greens recently. He goes there every Thursday to give books to children.

The bookmobile not only provides free books to children in the community. It also offers free Wi-Fi and kids can do chalk art on its back doors.