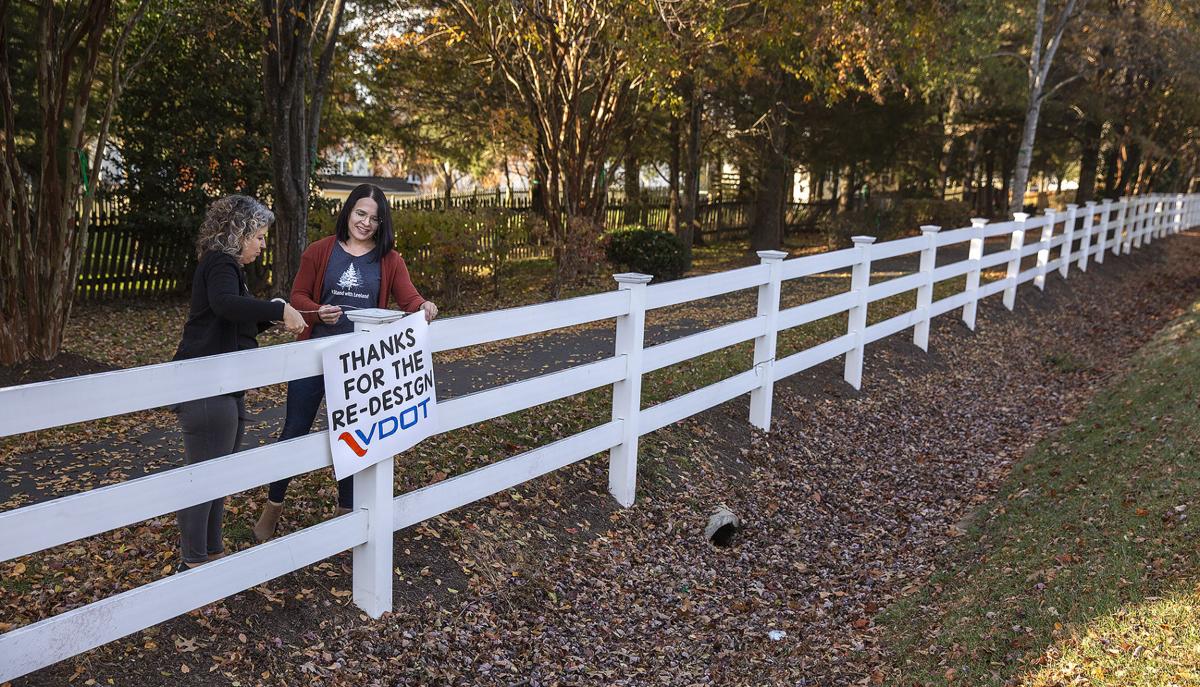 Leeland Station residents Gina McVicker (left) and Lorraine Serbinsky hang a sign thanking VDOT. for stopping plans to build a multi-use path along Leeland Road in Stafford. The project would have removed trees and fencing. 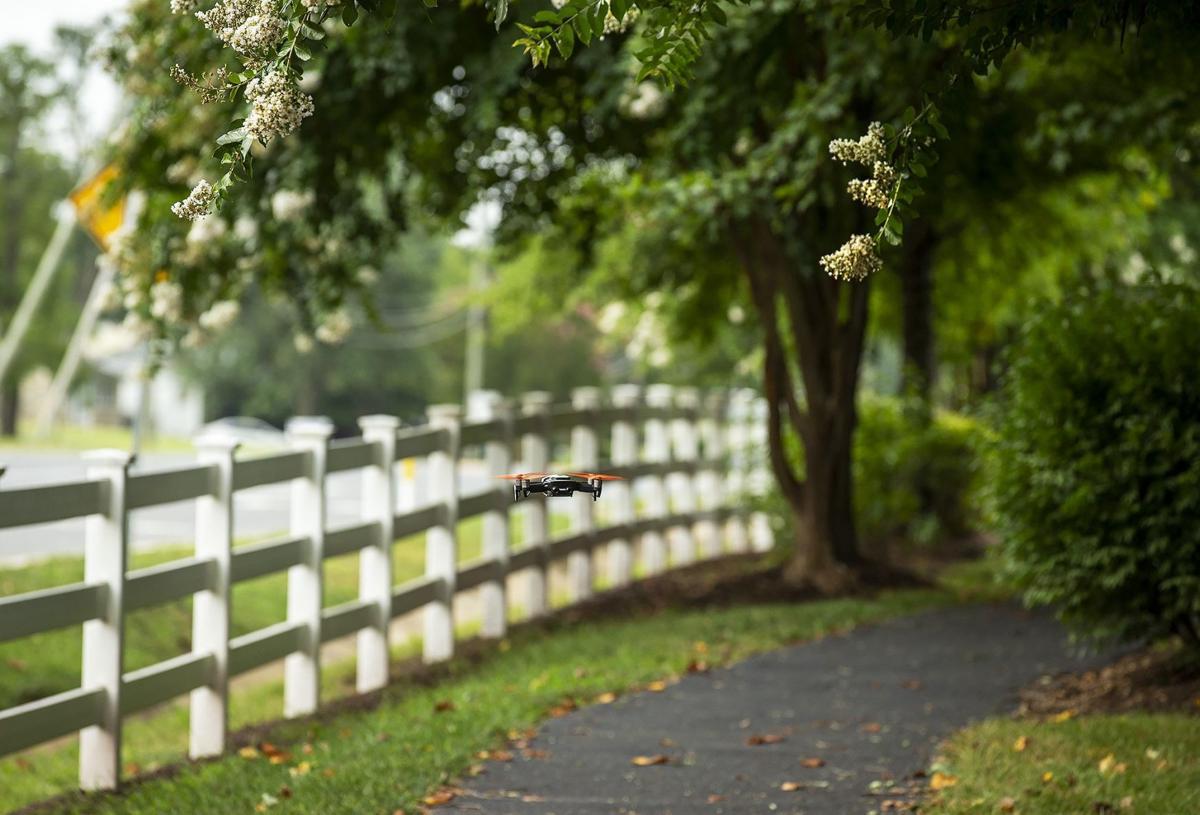 A drone flown by Mike Casey flies along a pathway adjacent to the Leeland Station subdivision in Stafford County on Saturday, July 31, 2021. 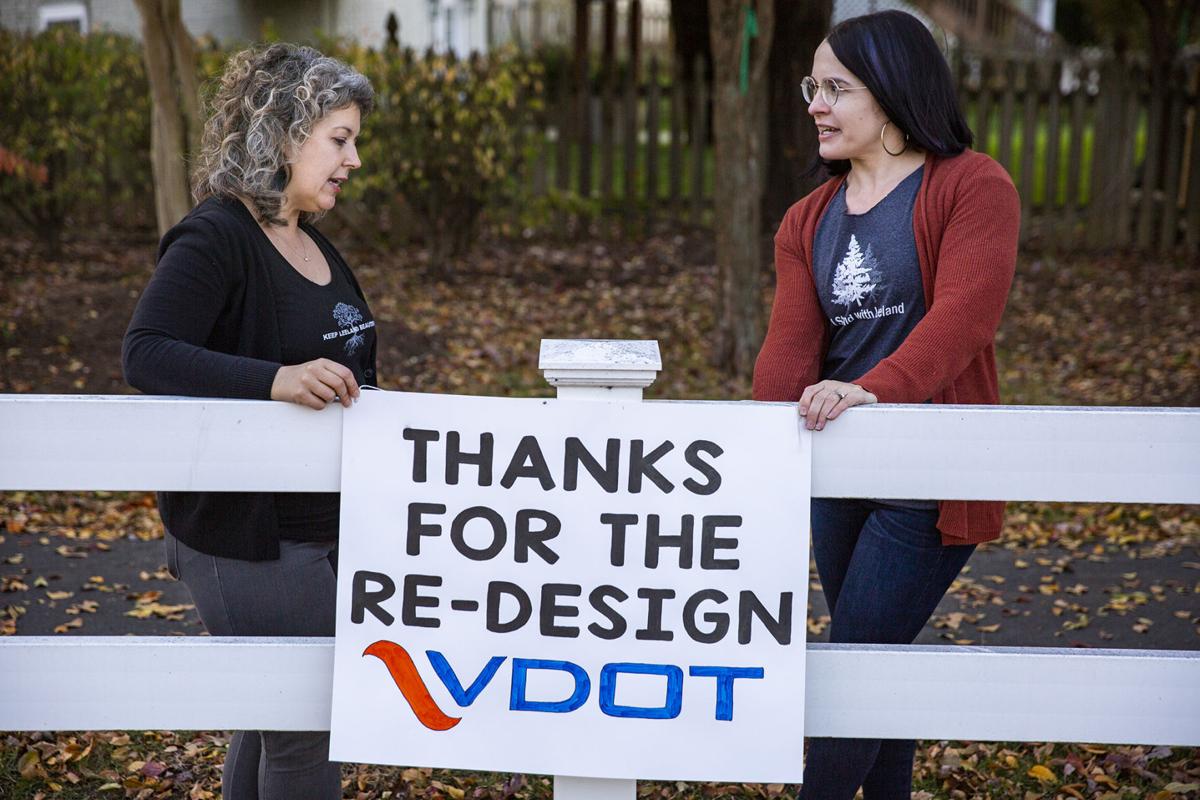 Residents of a southern Stafford neighborhood who opposed the construction of a $2.8 million 10-foot-wide bicycle path through their backyards are now pleased with a revised plan that retains the narrow, tree-lined path they wanted preserve.

“We were thrilled that they were willing to listen to us and to try to compromise,” said Leeland Station resident Gina McVicker, who helped organize the neighborhood group opposed to the Virginia Department of Transportation’s original plan. “We weren’t asking for them to completely kill the project. We did see the value in having the safe pedestrian path from Deacon Road to the VRE.”

McVicker, joined by her friend and neighbor Lorraine Serbinski, launched an effort in June to help reach all 850 homes within the Leeland Station subdivision after learning of the pending project. McVicker felt compelled to be involved after learning the VDOT plan would have removed 12 mature trees from her property and placed an 18-inch drainage pipe in her backyard.

“I think they heard us,” said McVicker. “It was all very obvious there were alternative options that were better and were going to be cheaper.”

On Nov. 16, VDOT representatives presented a revised project plan to the county’s infrastructure committee that will retain the neighborhood walkway and the mature trees that surround it. McVicker said she likes the revised proposal, but county supervisors still have to make the final call when they meet on Dec. 14.

Last spring, residents of the Leeland Station neighborhood started to hear rumors of the sidewalk project. During that time, McVicker and Serbinski both also learned of an Oct. 3, 2019, VDOT public hearing on bicycle and pedestrian improvements along Leeland Road that only six people attended.

McVicker, like other neighbors, said she never received notification about that October meeting and didn’t initially hear about plans for the new VDOT path until February, when she received a letter from a Richmond attorney regarding a portion of her property being impacted by the project.

“We made it known that we were not very happy with [VDOT’s] public outreach effort,” said McVicker. “We never received the letters in the mail that VDOT claims they mailed.”

In June, McVicker said she met with VDOT officials and after learning the full scope of the project she immediately joined forces with Serbinski. The pair soon had a substantial number of followers on social media and had raised nearly 1,000 signatures on a petition opposing the project.

“We publicized it and tried to rally the residents behind it,” said McVicker. “Everyone was involved and invested in a common cause.”

On Aug. 3, about 200 Leeland Station residents gathered at the cafeteria of Conway Elementary School to hear about the plan from VDOT representatives. The event drew Del. Joshua Cole, D-Fredericksburg, as well as Falmouth Supervisor Meg Bohmke.

“It was really cool, and really inspiring, to see all of us kind of coming together on this thing and working together,” said Serbinski.

Although VDOT resident engineer Kyle Bates tried to his best during the August town hall to sell the VDOT idea, most residents still opposed it.

“There has to be a better way,” said Serbinski. “Taking out all those trees, taking out the fence, that leaves our kids exposed to traffic, to the public. That’s a big safety concern for a lot of us.”

Other residents told VDOT representatives that bicycle sightings are a rarity on the southern Stafford stretch.

“We’re talking about putting a $3 million project for maybe five bicyclists, and that’s questionable,” Eric Kennedy said. “This isn’t ‘Field of Dreams.’ This isn’t, ‘Build it and they will come.’ This is why people don’t trust government, because this is an absurd project.”

VDOT’s compromise that’s up for approval next month basically retains the existing 5-foot-wide sidewalk Leeland Station residents want, along with the mature trees, landscaping and white ranch-style fencing that runs along Leeland Road. Pedestrian crosswalks are proposed at the intersections of Walnut Farms Parkway and Perth Drive and also at Walnut Drive and the end of the path.

Although the original plan called for VDOT to maintain a new 10-foot-wide path, the revised plan calls for Leeland Station homeowners to be responsible for maintaining their existing path. Serbinski said that’s a good compromise, as Leeland Station homeowners have been maintaining the path since the neighborhood was first created nearly two decades ago.

VDOT officials said if the Leeland Station Homeowners Association provides the required right of way as part of the new proposal, the pedestrian crosswalk at Walnut Farms Parkway and Perth Drive could be installed next year while the other pedestrian improvements in the area would be installed during the Leeland Road widening project, scheduled to go out for bid in fiscal year 2027.

VDOT spokeswoman Kelly Hannon said a public hearing for the project that will eventually widen Leeland Road to three travel lanes between Julian Drive and Walnut Drive will take place before that project is advertised in fiscal year 2027.

Meanwhile, McVicker said residents of the Leeland Station neighborhood will meet later this month to not only celebrate keeping their beloved paved footpath, but to recognize those who saved it.

“The reason for the celebration is so Lorraine and I can thank our Leeland neighbors for their support and work to save our path,” she said. “We couldn’t have done it without them.”

Leeland Station residents Gina McVicker (left) and Lorraine Serbinsky hang a sign thanking VDOT. for stopping plans to build a multi-use path along Leeland Road in Stafford. The project would have removed trees and fencing.

A drone flown by Mike Casey flies along a pathway adjacent to the Leeland Station subdivision in Stafford County on Saturday, July 31, 2021.