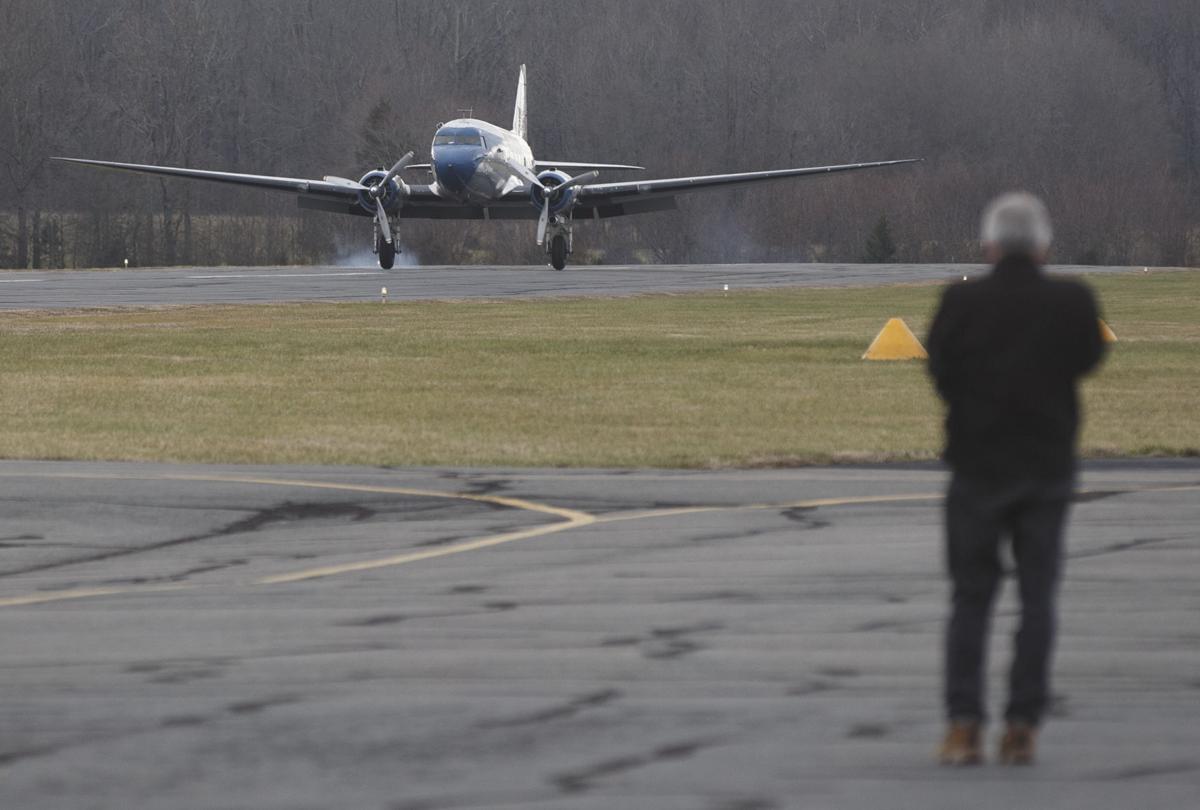 The 81-year-old Stars and Stripes, once part of the Eastern Airlines fleet, touches down at Shannon Airport. 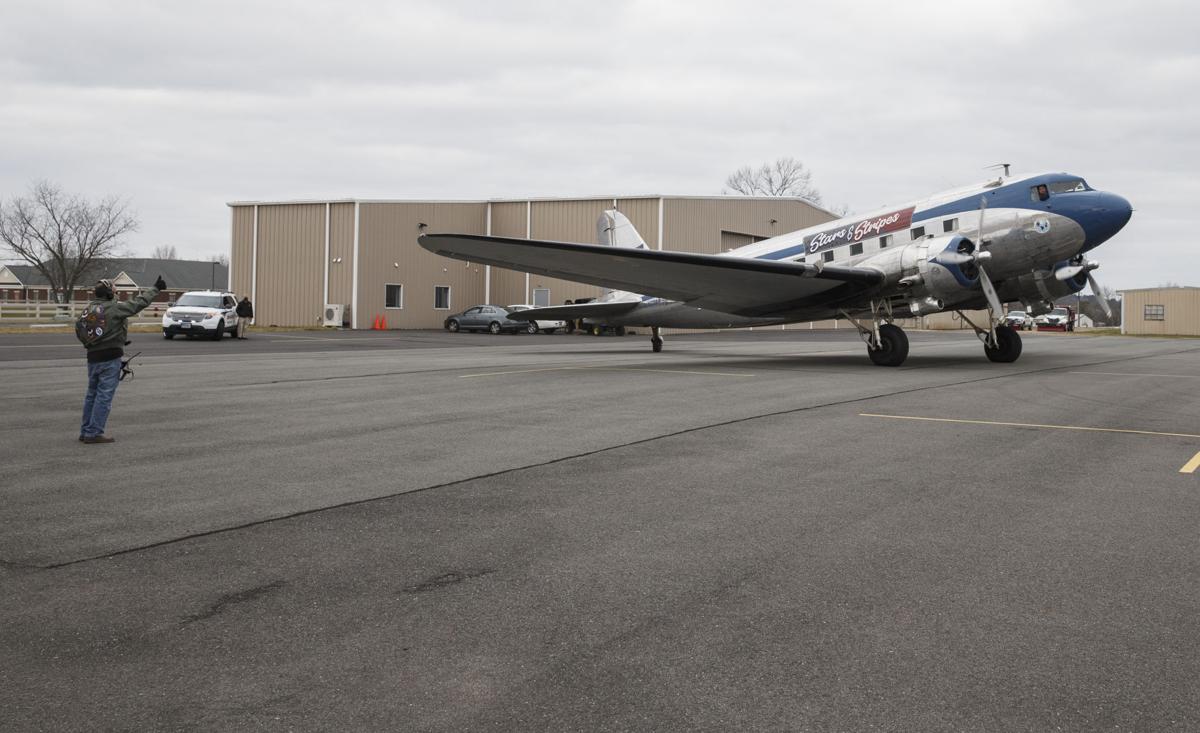 Shannon Airport owner Luke Curtas gives a thumbs-up as the DC-3 arrives. Wednesday. He plans to keep the plane flying. 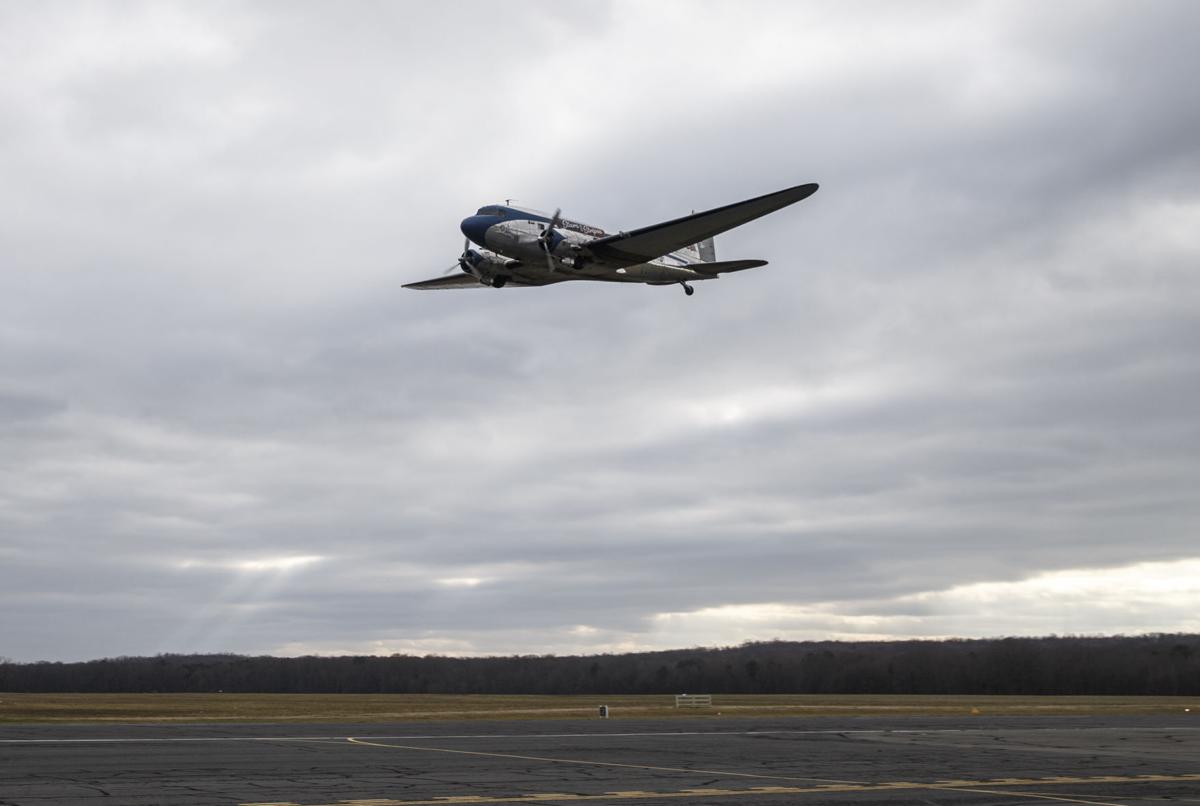 The Stars and Stripes arrives at Shannon Airport earlier this week. The plane was acquired by the Shannon Air Museum and will be added to its collection of historic aircraft. 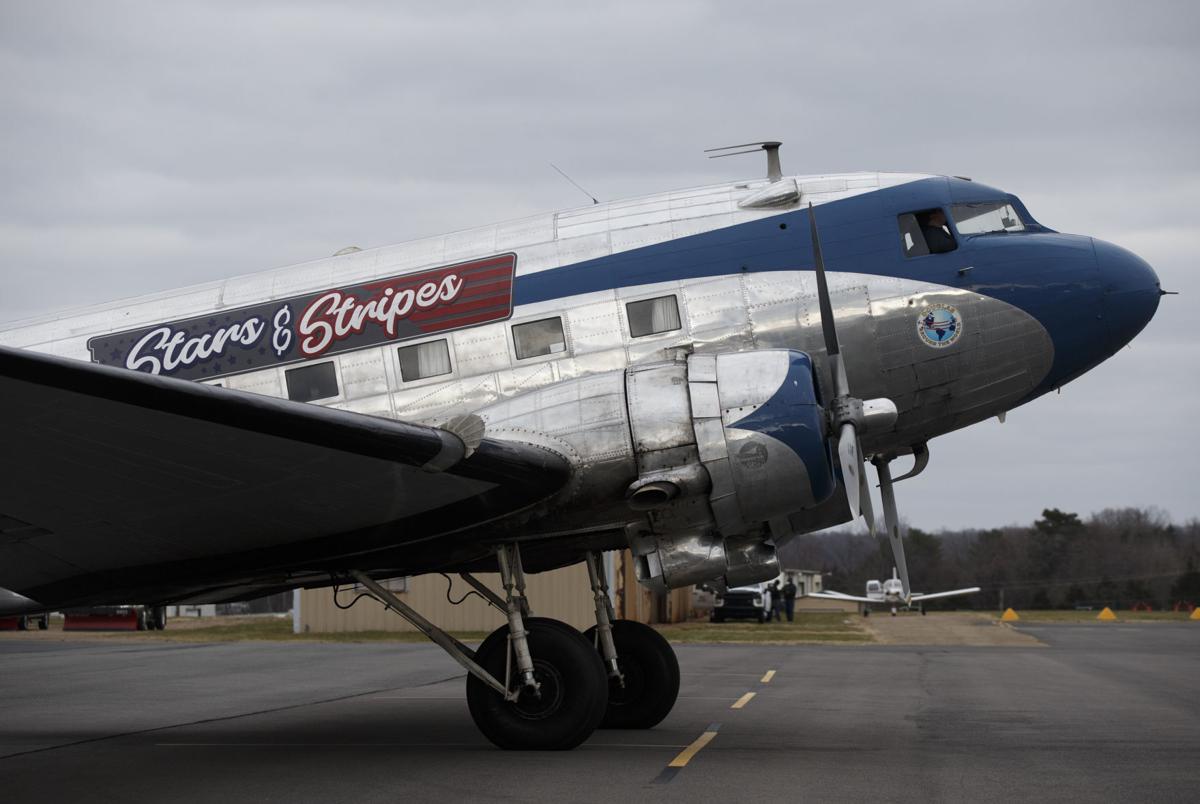 The Stars and Stripes, a vintage DC-3, used to be housed at a museum in Georgia and took part in air shows. 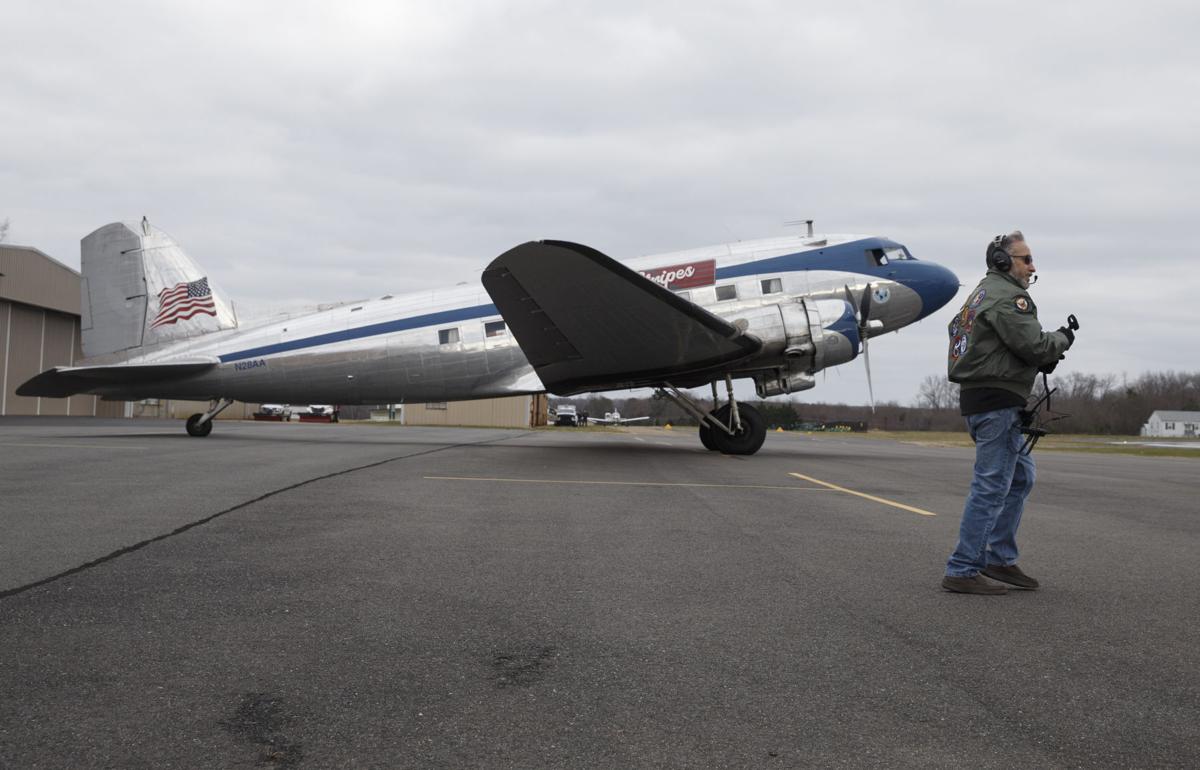 Luke Curtas, owner of SHannon Airport, walks past the Stars and Stripes, a vintage DC-3, after it arrived at Shannon Airport in Fredericksburg, Va. on Wednesday, Jan. 6, 2021.

About 100 people gathered at Peach State Aerodrome in Williamson, Ga., on Wednesday to bid farewell to Stars & Stripes, an 81-year-old DC-3 commercial airliner, as it began its journey up the east coast to Spotsylvania County.

“They’re not losing it, we’re just moving it,” said Luke Curtas, who, along with wife Kim, owns and operates Shannon Airport. “I wanted to get an aircraft that had a history with Eastern Airlines.”

Stars & Stripes, which touched down safely at Shannon Airport at 1:23 p.m. Wednesday, has a history dating back to 1940, when the silver-hulled airliner rolled off the assembly line and was sold to Braniff International Airlines. The propeller-driven craft was later acquired by Provincetown–Boston Airlines before being passed to Eastern Airlines, where it operated out of Massachusetts during the warm months, transitioning to Florida airfields during the winter.

Ron Alexander, known among fellow pilots as a “quiet giant” of aviation, had also previously owned the beloved DC-3. Alexander, who restored the airplane and christened it Stars & Stripes, died Nov. 17, 2016, in a Curtiss JN-4 Jenny aircraft crash in Georgia. Following his death, another owner kept Stars & Stripes in public view at a Georgia aviation museum and showed it off at air shows.

“He’s going to work with us as the pilot and will come up [from Georgia] to work with the museum,” said Curtas. “It’s a labor of love with the aviation community to get involved with this.”

Curtas said what really attracted him to Stars & Stripes was its ties to Eastern Airlines, largely because the connection between the former airline and Shannon Airport runs deep.

“As we grow the [Shannon Air Museum], we wanted to have an aircraft like that, part of the museum artifacts,” said Curtas.

Shannon Airport was founded in the 1950s by Sidney Shannon Jr., as a result of his love for aviation and to honor his father, Fredericksburg native Sidney Shannon Sr.

The elder Shannon helped form Eastern Airlines along with Edward Vernon Rickenbacker, a U.S. Army Air Forces captain and the most successful fighter ace of World War I. Eastern Airlines went on to hold a near-monopoly on air travel between New York and Florida from the 1930s until the 1950s, and it dominated the airline industry for the decades that followed until its demise in 1991.

In the 1960s and 1970s, Shannon’s son bought an extensive collection of aircraft to create his own aviation museum at Shannon Airport that he oversaw until he died in 1981.

“He bought all these rare aircraft, the rarest, privately owned aircraft in the world, and he brought them all to Fredericksburg,” said Curtas.

Following Shannon’s death, the Shannon family donated the aircraft collection to the Virginia Aeronautical Historical Society, which placed the collection at the Virginia Aviation Museum at Richmond’s International Airport.

“That museum was made up mostly of the Shannon Air Museum collection,” said Curtas.

In 1992, Billie Toombs and Robert Stanley, who both worked for Shannon Jr., purchased the Spotsylvania airport, and held it until 2014, when the Curtas couple took ownership.

What Curtas soon discovered were old artifacts on the property, including photographs and telegraphs sent by aviators on trans-Atlantic voyages.

“I looked at the history of the airport and didn’t want to see it go down the drain,” said Curtas.

About the same time as Curtas was making historical discoveries locally, he learned the historical society was having difficulty maintaining the extensive Shannon airplane collection in Richmond. The society eventually donated the aircraft to Richmond’s Science Museum and Curtas, as the new owner of the airport, told the museum he was interested in moving the collection back to Spotsylvania.

“We spent over $1.5 million moving everything back to Fredericksburg from Richmond,” said Curtas.

Today, the Shannon Air Museum is fully operational and is located just inside the airport entrance at 3380 Shannon Airport Circle. Curtas said first-time visitors are in awe when they open the door to the museum and step onto the exhibit hall.

“It’s like when Dorothy stepped out of the black and white into the color,” said Curtas.

Stars & Stripes is positioned just outside of the museum, giving visitors an instant glimpse into aviation’s historic past.

“The plane has lived outside all its life,” said Curtas. “With it here now, we hope to have the DC-3 experience, not to show it to people on the ground, but to actually fly it.”

The Shannon Air Museum is open daily by appointment only. Visit shannonairmuseum.com or call 540/642-4387 for more information.

COVID variant cited in at least one death in Fredericksburg region

The U.K. strain has caused 30 of the Fredericksburg health district’s 34 infections from variants. Other strains found locally originated in South Africa and California.

The 81-year-old Stars and Stripes, once part of the Eastern Airlines fleet, touches down at Shannon Airport.

Shannon Airport owner Luke Curtas gives a thumbs-up as the DC-3 arrives. Wednesday. He plans to keep the plane flying.

The Stars and Stripes arrives at Shannon Airport earlier this week. The plane was acquired by the Shannon Air Museum and will be added to its collection of historic aircraft.

The Stars and Stripes, a vintage DC-3, used to be housed at a museum in Georgia and took part in air shows.

Luke Curtas, owner of SHannon Airport, walks past the Stars and Stripes, a vintage DC-3, after it arrived at Shannon Airport in Fredericksburg, Va. on Wednesday, Jan. 6, 2021.