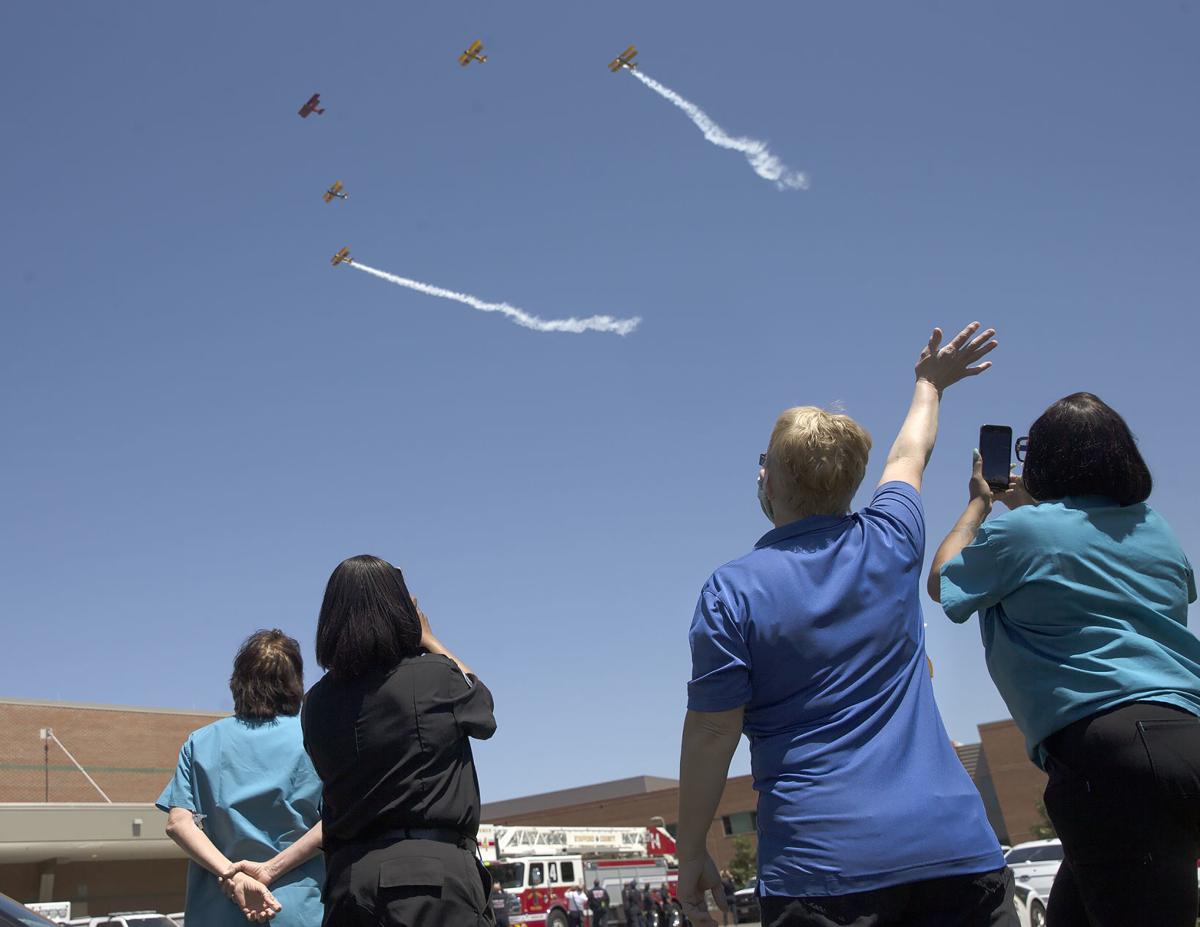 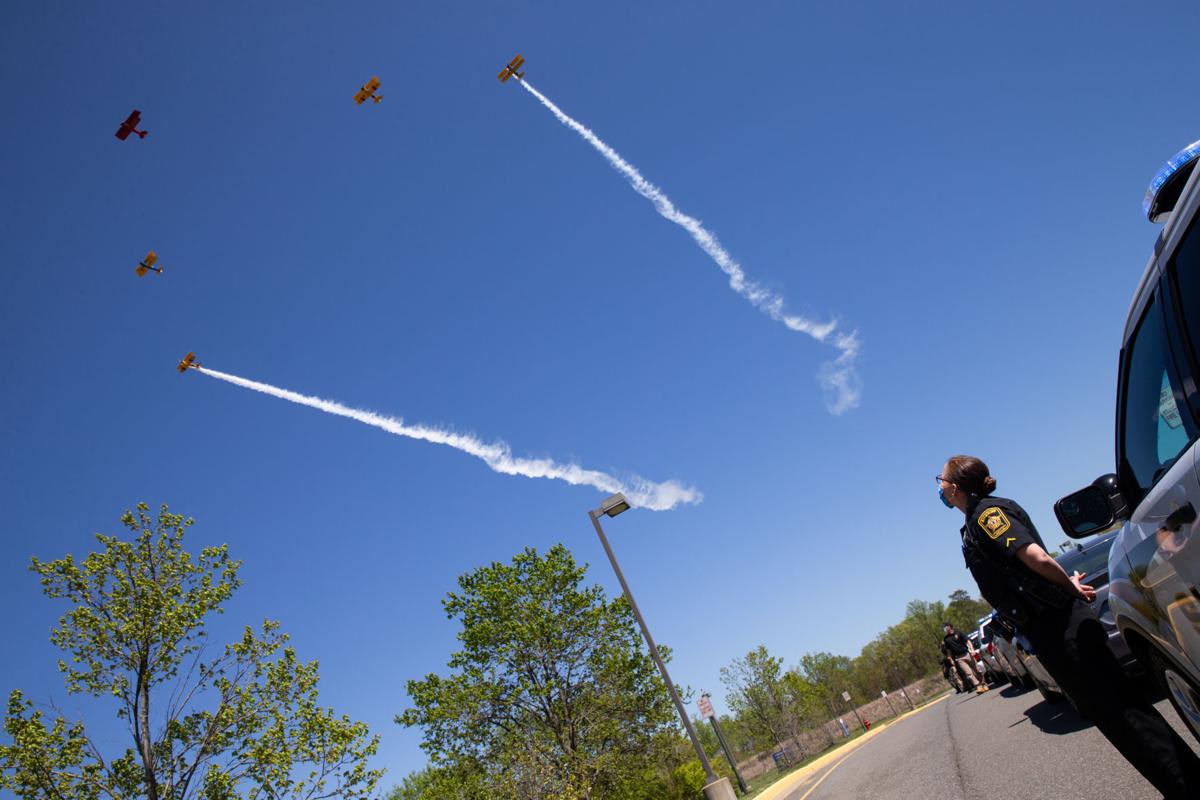 Pilots from the Mid-Atlantic Stearman Association conduct a flyover to show their appreciation for health workers and first responders at Spotsylvania Regional Medical Center on Wednesday. 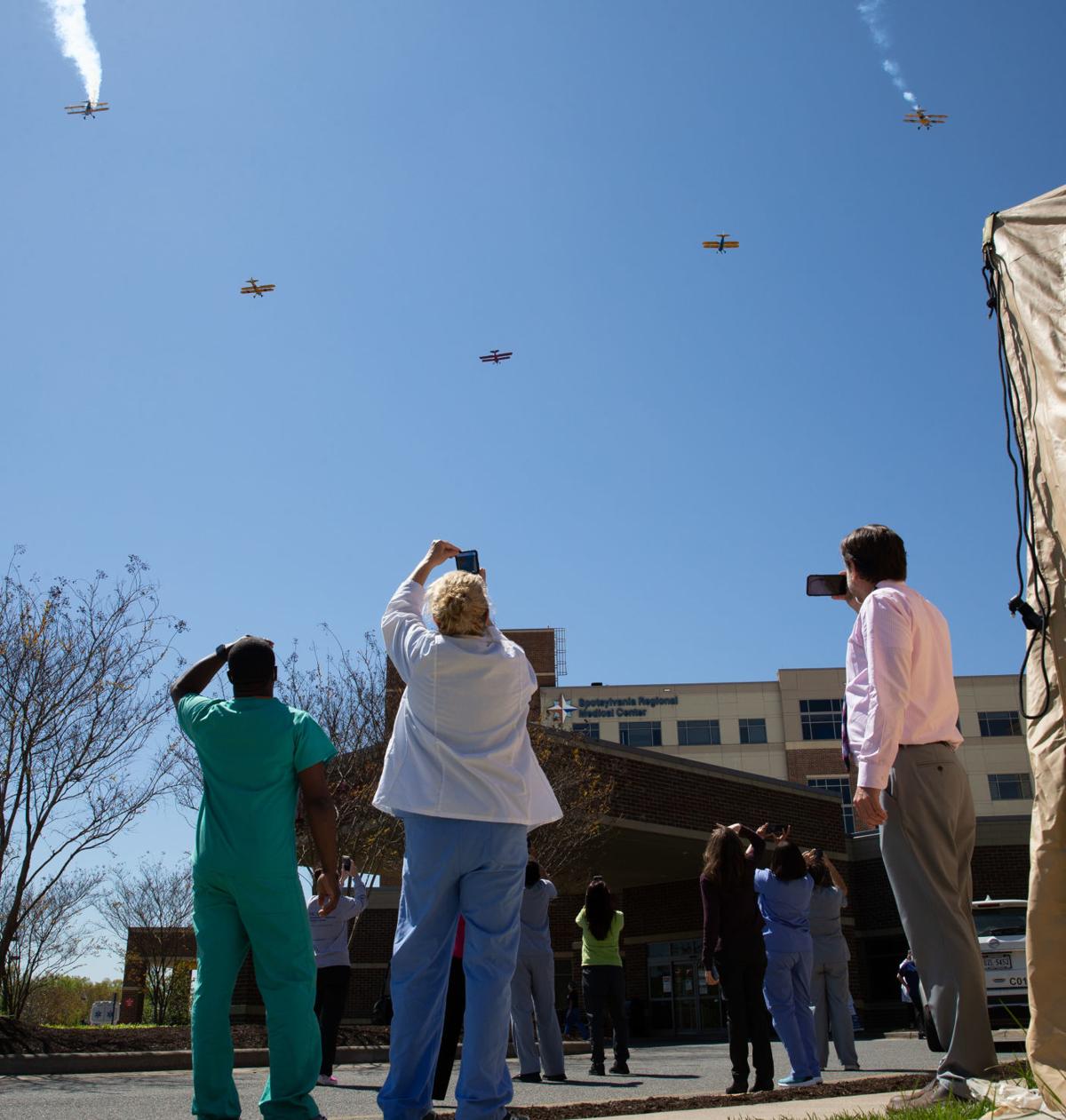 Staff from Spotsylvania Regional Medical Center watch a flyover conducted by members of the Mid-Atlantic Stearman Association in Spotsylvania, Va. on Wednesday, April 22, 2020. The pilots flew over all three Fredericksburg-area hospitals to show their appreciation for health workers and first responders. 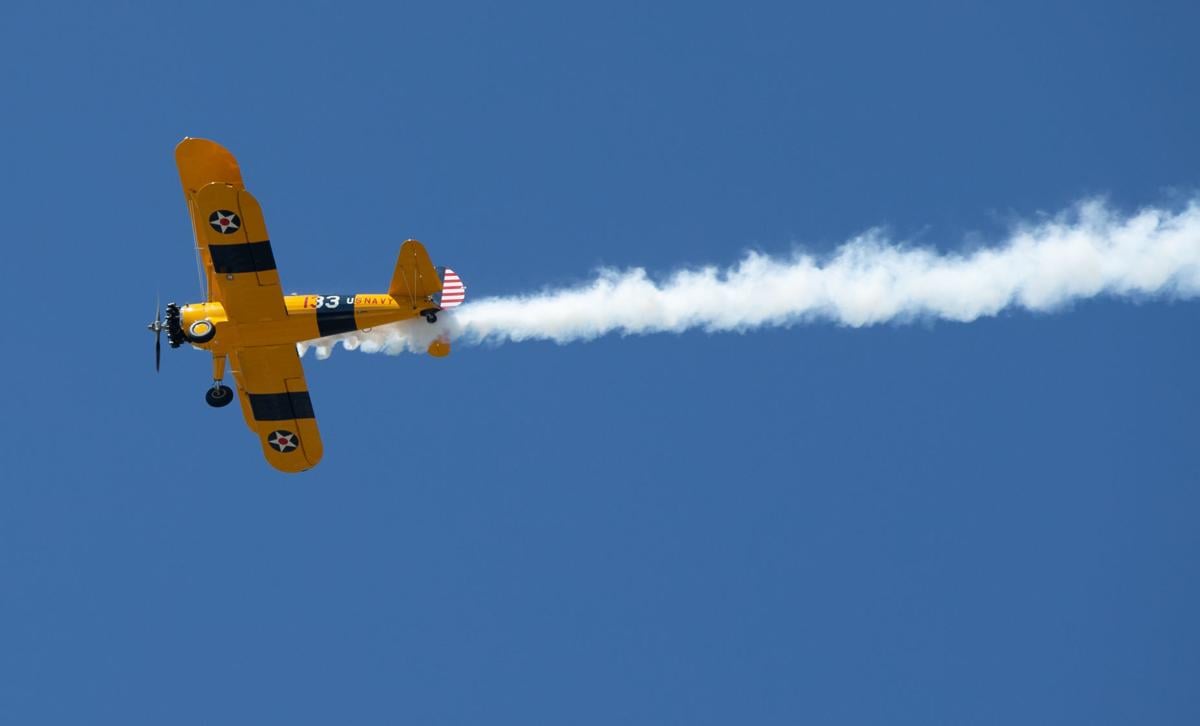 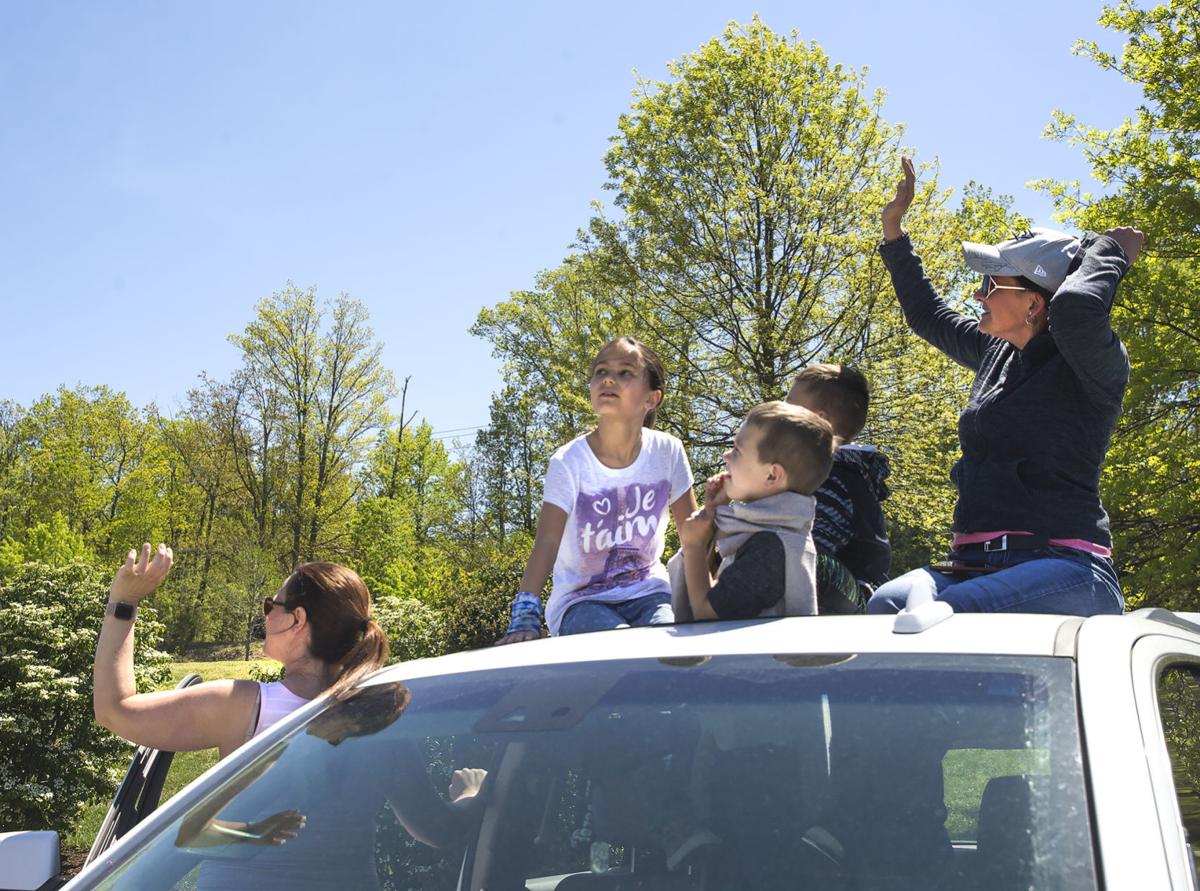 Five colorful, vintage Stearman PT-17 biplanes—flying under the call sign “COVID Flight”—took to the skies from Stafford Regional Airport at 1:30 p.m., flying first over Stafford Hospital at 1:45 p.m., then over Mary Washington Hospital in Fredericksburg at 2:05 p.m. The final pass took the planes over the Spotsylvania Regional Medical Center at 2:30 p.m., before they touched down at Spotsylvania County’s Shannon Airport.

Lee Fox, a pilot during the mission, said the team took to the skies to show support and boost morale for all regional medical professionals and first responders serving in the midst of the coronavirus pandemic.

“They’re the ones taking the bullets; they’re on the front lines,” said Fox. “We’re in our homes, isolated, and these guys have to go to work putting in long hours, and they’re exhausted. Anything we can do to let them know we appreciate them, we’re there.”

The five airplanes were flown by members of the Mid-Atlantic Stearman Association, a regional group of pilots with a passion and intense interest in the once widely used World War II military training aircraft.

“Anyone who flew an airplane in World War II had some Stearman time,” said Lee.

Lee’s motivation for the flight came after a recent Las Vegas flyover by the U.S. Air Force Thunderbirds flight demonstration team. The purpose of that April 11 flight was to show appreciation for that region’s health care workers, first responders and other essential personnel working to combat COVID-19.

“I thought, what have they got that we don’t have, aside from jet airplanes?” said Fox.

Fox took the idea and immediately reached out to his neighbor, Dennis Tosh, whose son Eric Tosh is an emergency medicine physician at Mary Washington Hospital. Fox proposed his group perform a similar flyover to thank medical personnel at Mary Washington and Stafford hospitals.

Dr. Tosh reached out to Lisa Henry, marketing director for Mary Washington Healthcare, and passed the idea on to her.

“He said, ‘I’ve got this crazy thing. These guys want to show their appreciation to our health care workers,’ ” said Henry. “It’s pretty exciting, and we’re really grateful that the community is thinking of us and wants to bring some moments of happiness to our teams right now.”

With the hospitals’ approval, Fox began coordinating the event and putting all the moving parts of the mission together. Since the planes were going to be in the air, they could make a third pass south the same day, to include Spotsylvania Regional Medical Center.

As Fox continued to prepare for the mission, Henry learned members of the social media group “MW Hospital Love Day,” were planning their own event to honor medical staff on the same day of the flyover.

At 1:30 p.m., members of that group gathered at the Taco Bell restaurant at 543 Jefferson Davis Highway, then traveled along Hospital Drive adjacent to the hospital, waving signs to show support for hospital staff. Henry coordinated with that group to have them parade their vehicles near the hospital as the formation of biplanes passed overhead.

“It worked out that we were able to put it all together as one big event,” said Henry.

Henry said Wednesday’s thank you was a welcome and well-received break for hospital staff, who have been putting in exhausting hours since the start of the COVID-19 pandemic.

“I can’t imagine the burden that they carry,” said Henry. “They’re doing their jobs and they’re passionate about showing up and giving their all to our patients every day.”

Henry said the community outpouring for hospital staff during the pandemic has been incredible and heartwarming. Well-wishers have brought meals, or have sent encouraging cards and letters to hospital staff, each showing gratitude and appreciation for the hard work they have had to endure during the COVID-19 crisis.

The mid-week flyover gave the region’s hospital staff a rare opportunity to step outside, enjoy some sunshine and fresh air, and see firsthand the outpouring of support from a thankful community.

“I think this will go a long way for morale,” said Henry.

'A LOVE FOR STEARMANS'

Pilot Lee Fox said from the ground, Wednesday’s aerial maneuvers may have looked easy to the observer, but from the cockpit, it took a mixture of careful coordination and intense concentration to pull it off.

“It's a discipline, you really have to work hard at it,” Fox said. “It may look easy when we’re up there, but we're working our butts off just to keep in position, trying to anticipate what the next move will be and make it look good.”

All the pilots who participated in the flyover are either former military or are airline pilots—active and retired—but they all share additional qualities.

“We all trust each other, we’ve all flown with each other, and we have a lot of training and experience,” said Fox. “We all have a love for Stearmans and a love for formation flying.”

More than 10,600 Stearmans were built in Wichita, Kansas, during the 1930s and 1940s. Lee said there are about 1,000 Stearmans still in existence, and the Mid-Atlantic Stearman Association has about 50 members throughout the region.

The plane served as a primary trainer for the U.S. Army Air Forces, the U.S. Navy and the Royal Canadian Air Force throughout World War II.

NYC to pay unvaccinated $100 to get jab

NYC to pay unvaccinated $100 to get jab

NY to require state employees to get vaccines

NY to require state employees to get vaccines

Pilots from the Mid-Atlantic Stearman Association conduct a flyover to show their appreciation for health workers and first responders at Spotsylvania Regional Medical Center on Wednesday.

Staff from Spotsylvania Regional Medical Center watch a flyover conducted by members of the Mid-Atlantic Stearman Association in Spotsylvania, Va. on Wednesday, April 22, 2020. The pilots flew over all three Fredericksburg-area hospitals to show their appreciation for health workers and first responders.