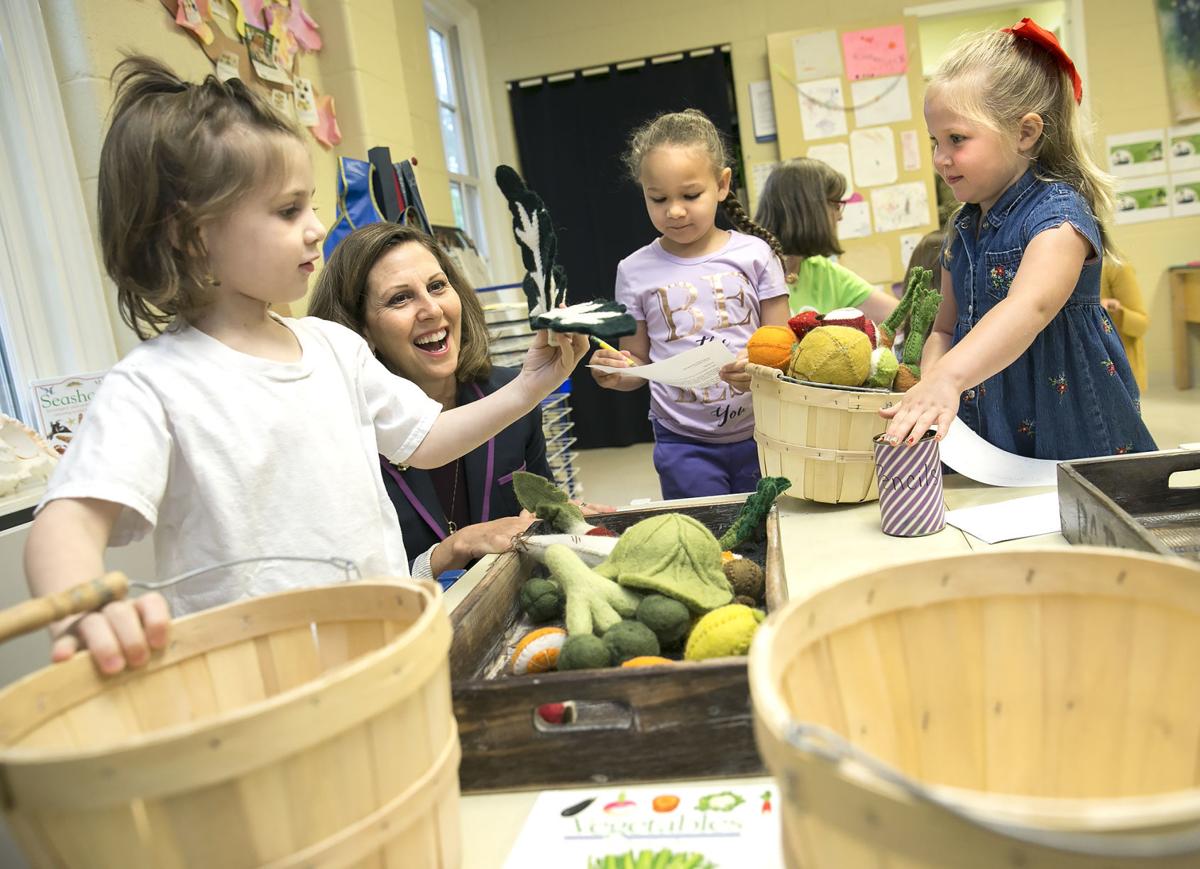 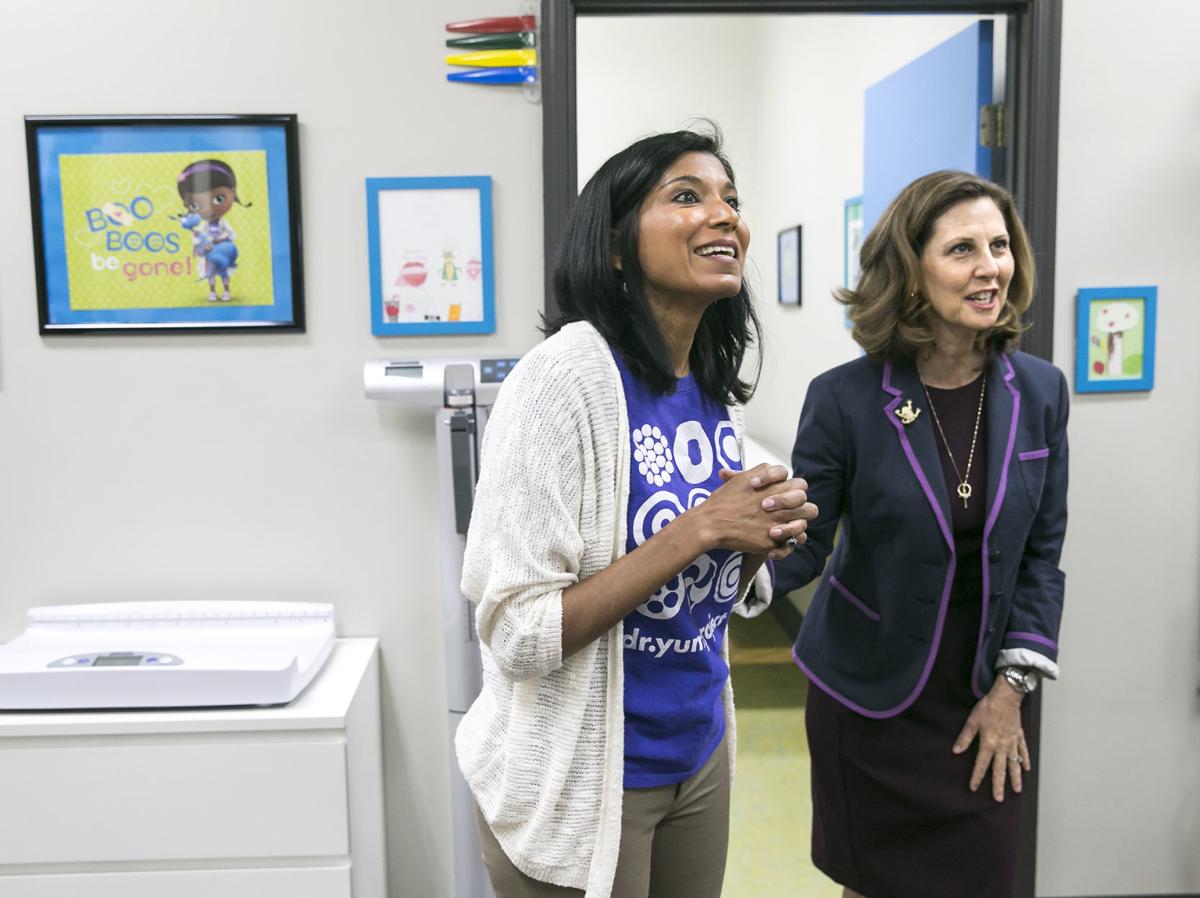 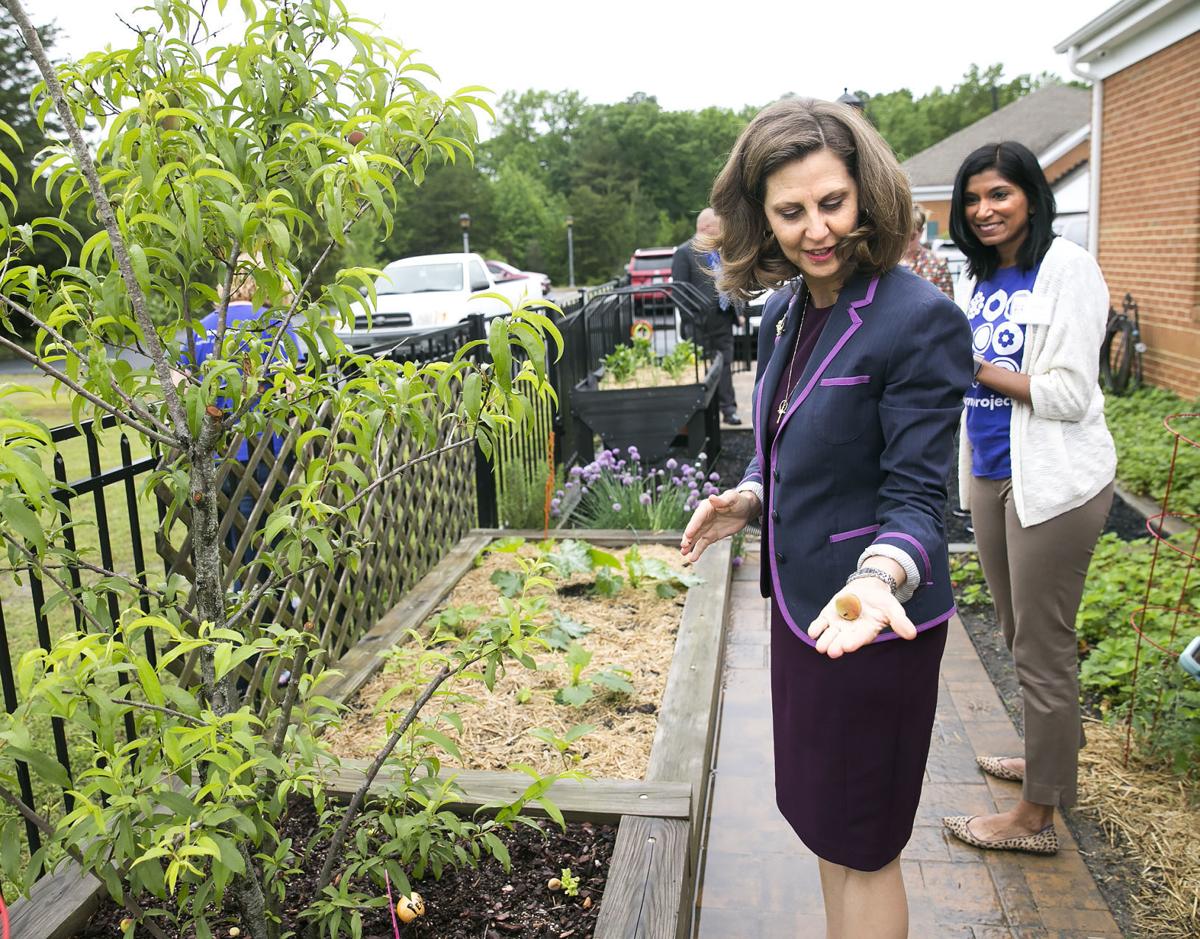 Pamela Northam looks over a peach that had fallen from a tree at Yum Pediatrics in Spotsylvania County on Monday, May 13, 2019. Dr. Nimali Fernando (background) gave the first lady a tour of the facility's garden.

Virginia first lady Pamela Northam sipped a Green Dragon Smoothie and sampled a Carrot Energy Bite as she listened to a Spotsylvania County pediatrician offer evidence that her program—which introduces children to fruits and vegetables at an early age—counters state statistics on obesity.

The commonwealth has the highest rate in the nation of obesity among preschoolers who receive the Supplemental Nutrition Program for Women, Infants and Children, or WIC. But in three years, those who've used a curriculum developed by Dr. Nimali Fernando, known locally as "Dr. Yum," have seen dramatic changes.

In the 2016–17, there were 146 children in the Fredericksburg Regional Head Start program, which serves the city and King George County. Laura Dove, educational program supervisor, measured their body mass index, or BMI, at the beginning and end of the year. The index is a ratio of weight and height and those whose BMI is higher than it should be are considered overweight or obese.

Of the 146 preschoolers, 19 had no change in their BMI during the year while 66 increased and 61 decreased.

After two years of learning about the benefits of colorful fruits  and becoming friends with vegetables such as broccoli, the children's numbers changed dramatically. Of 150 students, 104 saw a decrease in their BMI, 23 had an increase and 23 stayed the same.

A Duke University researcher in 2016 also concluded the curriculum is having a significant impact on the eating experiences of preschoolers.

"I am astounded by the work you've done, and in such a short period of time," Northam said. Then she held up the chart offered by Dove and said: "You have the data to prove it."

Northam also praised Fernando, wondering how the busy mother, pediatrician and business owner juggles it all. When Northam met the doctor's mother, Kamala Fernando, the personable and outgoing first lady clasped the older woman's hands and asked how proud she was of "this amazing young woman." Then, Northam smiled and teased that "she must get it from you."

Northam got an in-depth look on Monday at some of the programs offered by Nimali Fernando, who wears a number of hats. She's has her own pediatrics practice off Courthouse Road, where stalks of chives, tomato plants and Swiss chard grow in the mulched beds around the building instead of hostas and arborvitae.

"The kids know I don't give lollipops," the doctor said. "I give them a bag and let them pick some cherry tomatoes."

"I love that," Northam added.

When Fernando first opened a local practice in 2005, she saw children with digestive and behavioral problems and came to realize some of their issues were dietary—or started "upstream," as Northam put it. Fernando started a website, offering healthy recipes, and eventually expanded that effort into the nonprofit, the Dr. Yum Project.

Jessica Bruce mentioned one student at her day care in King George who had such severe digestive problems that he was seeing a specialist for extreme constipation. During one of the Dr. Yum lessons, the child ate not one, but three, of the Carrot Energy Bites—ball-shaped treats loaded with dates and oats—and his constipation problem was solved, Bruce said.

Fernando and other members of her team have focused on ways to make food kids wouldn't normally eat more appealing by teaching them how to make a fun recipe such as "Dinosaur Kale Salad." The group offers cooking classes, recipes, outreach and a preschool curriculum called Dr. Yum's Preschool Adventure, which is offered in 25 local preschools. It was developed in 2013 by Fernando and Melanie Potock, a language pathologist.

"It's beautifully done," Northam said on Monday after visiting Fredericksburg Cooperative Preschool. "I can see why it's so appealing to parents, teachers and most of all, the children."

In Wendy Cannon's class at the preschool, Northam met, and laughed, with 4-year-olds. When she introduced herself and said she was married to the governor, one boy spoke up: "My dad already told me that."

She was amazed that the youngsters had mastered the art of chopping vegetables and knew herbs such as basil and mint. As she visited an activity center called Farmer's Market, she "shopped" with other preschoolers and found a fuzzy, felt avocado that, when opened, showed the fruit's pit and pale flesh.

Northam turned to Heidi Hertz, deputy secretary for agriculture and forestry, and said: "Is that not adorable?"

After the preschool, Northam toured Fernando's facility—the test kitchen and pediatric practice are under the same roof—and raved about everything from the color scheme to the group's efforts to convince parents to serve something besides pizza and donuts at school activities.

Northam said she loved the way the Dr. Yum curriculum, which is being revised to cover two years of lessons, provides "functional and meaningful" activities for children and incorporates how foods look, feel and smell as well as how they taste. The lessons go hand in hand with another measure the first lady supports: putting more locally grown food on the menu at public schools.

Virginia schools doubled their purchase of fruits and vegetables grown in local fields from $7.7 million in 2014 to $15.4 million in 2017, and Northam wants schools to increase the purchases to at least $22 million by 2022.

"Children benefit from wholesome and fresh food to nourish their growing brains and bodies while learning the importance of agriculture and food production in their communities and across Virginia," she said in a recent press release.

King George has had multiple students at the Naval Academy before, but never four at the same time, with one representing each year's class.

Guinness World Records has to certify the results, in which Navy corpsman Ben Katzman broke all kinds of personal records.

This is the same neighborhood where a CCSO deputy shot and killed an armed man on Thanksgiving.

WATCH NOW: At Fredericksburg coffee shop, customers have been paying it forward since Feb. 17

Pamela Northam looks over a peach that had fallen from a tree at Yum Pediatrics in Spotsylvania County on Monday, May 13, 2019. Dr. Nimali Fernando (background) gave the first lady a tour of the facility's garden.