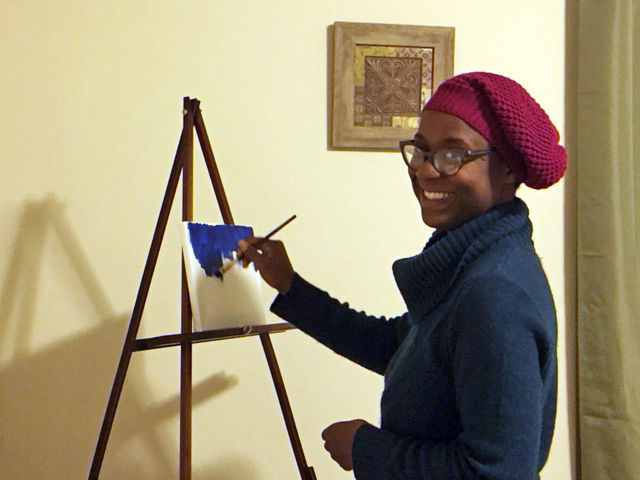 Dominique Bryant, who has a lifetime of foster care experience, ran out of options when she turned 18. 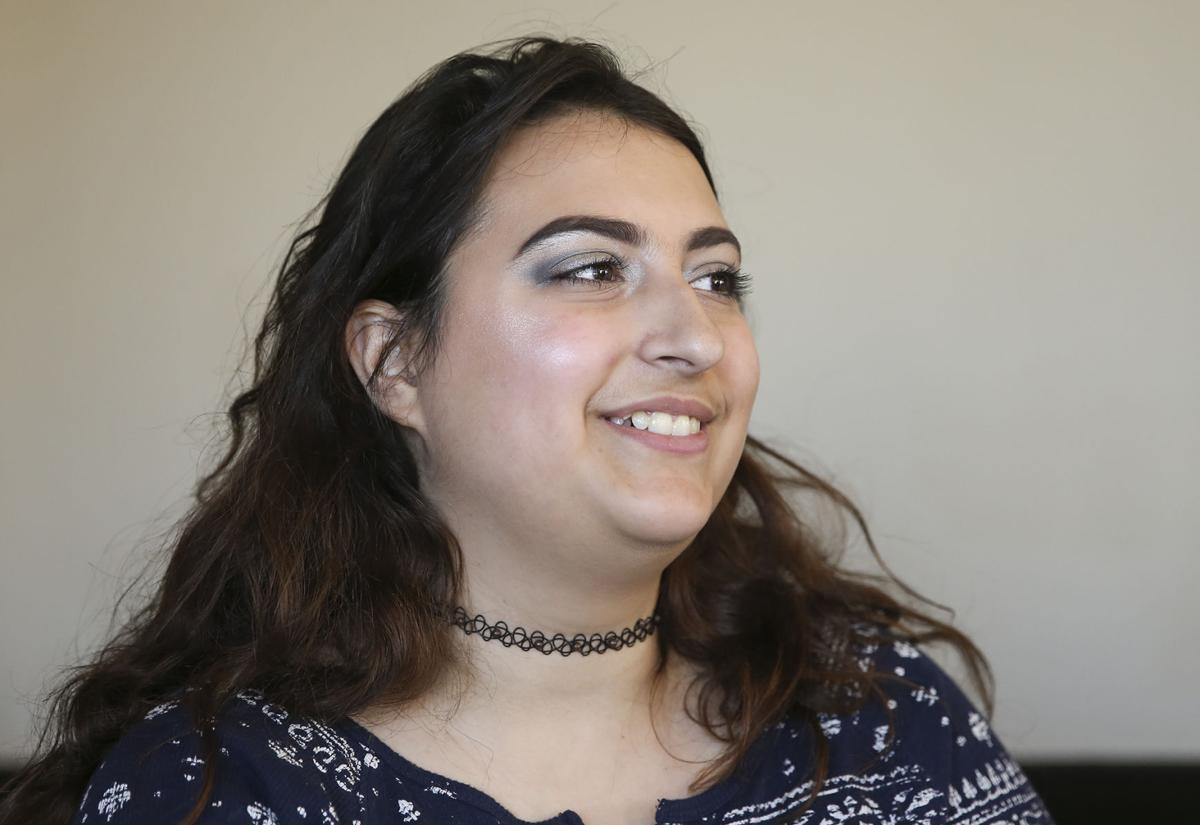 Tiffani Beissel, 21, talks about her experience with aging out of the state’s foster care system. 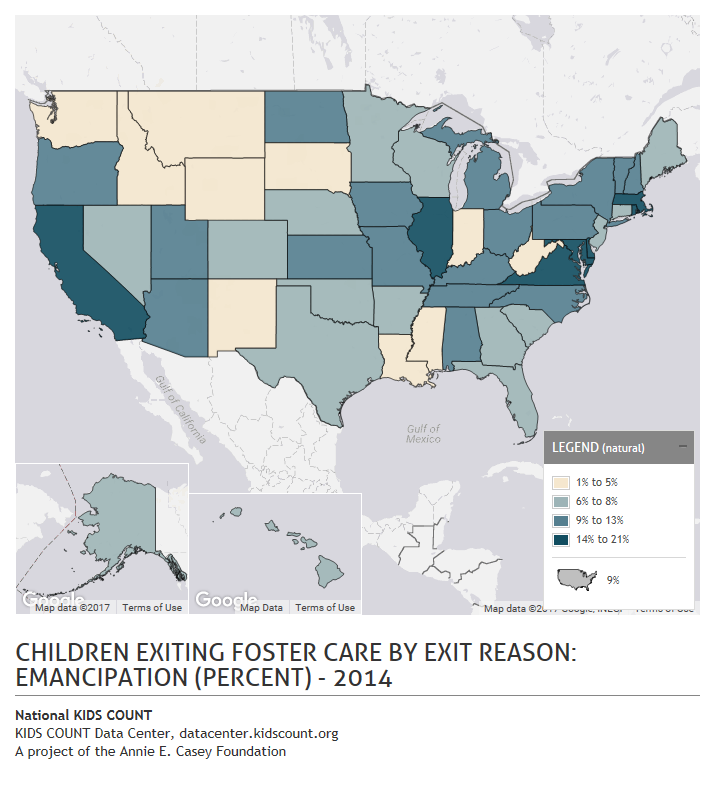 Dominique Bryant became homeless when she was 17.

Now 23, Bryant was placed in foster care in New York immediately after she was born. She was adopted when she was 10 and moved to Charlottesville with her adoptive mother. But when Bryant was 17, the mother terminated her parental rights.

Bryant went to a foster family and then to a psychiatric clinic to be treated for depression. After that, she said, the foster family didn’t want to take her back.

“Because I was right on the cusp of 18, there weren’t many options for me,” Bryant said. “I was placed in a sobriety house, even though I wasn’t an alcoholic.”

Residency in the home was contingent on attending regular meetings. Bryant missed one, because she couldn’t get transportation. She lost her place and spent four months homeless in the Charlottesville area. The outcome that Bryant faced as a result of aging out of foster care without achieving permanency—being adopted or finding a permanent foster placement—is common.

According to the results of a national survey conducted by Child Trends for the Children’s Home Society of Virginia and Better Housing Coalition, 20 percent of the people who age out of foster care are homeless within two years. Twenty-five percent are incarcerated, 42 percent drop out of school and 71 percent of the women are pregnant by age 21.

The report estimates that if this population graduated from high school at the same rate as the general population, they would earn $1.8 billion more over their working lifetimes and contribute $430 million in additional taxes.

The results of the survey, released Nov. 14, also show that Virginia has one of the highest percentages of youth exiting foster care due to aging out—20 percent compared to 9 percent nationally.

Meghann Cotter, executive director of Micah Ecumenical Ministries, a faith-based nonprofit that supports the Fredericksburg area’s homeless population, said she has seen the number of homeless youth increase in the 10 years she’s worked at Micah.

Between July 1, 2015, and July 1, 2016, the homeless services system in Planning District 16, which includes Fredericksburg and Stafford, Spotsylvania, Caroline and King George counties, served 162 clients between the ages of 18 and 24—12 percent of the total population served.

Cotter said she sees former foster care kids either age out of the system or emancipate themselves at age 18.

“They bounce around with friends or whatever and they’re OK for a while,” she said.

But she said research shows that 85 percent of former foster-care youth have experienced some kind of trauma.

“So not only are they lacking the life skills that all 18-year-olds lack, but they’re also dealing with a lessened amount of coping skills as a result of trauma experience and they have no social support system to wrestle with that,” Cotter said.

Though 18 is the age of legal adulthood, research quoted in the CHS report shows that the brain continues to develop through age 25. Today’s young people tend to rely on their parents for emotional and financial support well into their 20s. When kids don’t have a built-in support system, bridging the gap between adolescence and adulthood is that much harder.

“For a lot of kids, the first year of college is tough,” said Gail Crooks, director of the Spotsylvania Department of Social Services. “But you bounce back to mom and dad. When you don’t have a safe place where you can go to come back from tough spots, they just have a cumulative effect.”

In 2016, 464 foster-care youth aged out of the system in Virginia. Those figures have the potential to grow, as the number of children in foster care nationally grew by 8 percent between 2011 and 2015, possibly due to the opioid epidemic—which was declared a national public health emergency in October.

Bruin Richardson, chief advancement officer at Children’s Home Society, said there are a number of reasons why Virginia has higher numbers of youth leaving foster care without being adopted.

“One is that we’re a county-administered system and that creates some barriers that make it more difficult to get kids adopted,” he said in a phone interview. “Also, kids tend to be older when they come into the system in Virginia than the national average. What that results in is they may have more significant trauma and then they really are teenagers before they become eligible to be adopted. And its harder to place those kids.”

In 2014, the proportion of older children—ages 16 to 20—in Virginia’s foster care system was larger than it was for the nation as a whole, the CHS report shows.

Crooks said that, anecdotally, kids tend to be 10 or 11 years old when they come into foster care in Spotsylvania.

“In Virginia, we try very hard to maintain children in their home,” she said. “We try to support the family to stabilize it. So when we do come in, we’ve exhausted a whole lot of options, and kids are coming in with higher levels of need.”

“We try to prepare our kids, because we know there might be challenges to permanency,” she added.

Virginia is one of 36 states that elected to extend foster care services beyond the age of 18. Last year, the state introduced a new program, Fostering Futures, which went into effect July 1, 2016, for people who turned 18 on or after that date. It uses federal Title IV-E funds to extend care past the age of 18, so youth in successful foster home placements can stay there. They can stay in contact with their case managers or receive stipends for rent and groceries.

However, Fostering Futures is an opt-in program, and young people often don’t choose to opt in, leaving the system before the mandated cut-off age.

Richardson said this was one of the most surprising findings of the CHS report.

“Maybe it shouldn’t have been a surprise to us, but even in states where there are programs for youth through the age of 21, in the vast majority of those states, the majority of youth are opting out of those programs at 18 or 19,” he said. “And that was eye-opening.”

Crooks said that many kids who have been in the foster care system for years choose emancipation as soon as they are able because they just don’t want to be connected to social services anymore.

“Sometimes, all they want is distance,” she said.

She thinks it would help those kids to hear from their peers.

“They need to hear from someone else the value of it,” she said. “They need someone to help them see down the road and see how staying associated with us can help them get to their tomorrow.”

Crooks said she would love to set up a body of mentors from the local community to act as cool, caring aunts or uncles to older foster care kids.

“It would be like Big Brothers/Big Sisters, for anyone who wants to sign up to be a mentor or who has something these kids respect,” she said. “Like the mom of your best friend that you can talk to when you can’t talk to your mom.”

Another way to fight the problem of youth aging out of foster care is to find more families willing to foster or adopt teenagers, and adequately supporting those who do.

Cotter said she’s seen kids at Micah’s cold-weather homeless shelter who were dropped there by their adoptive parents.

“The parents are just done, for whatever reason,” she said.

Crooks said it is very difficult to place teenagers in adoptive homes, especially when the teens have years of traumatic experiences behind them.

“It’s very difficult to take advantage of those programs that may exist if you’re trying to figure out where your next meal is coming from and whether you will have a roof over your head tomorrow night,” he said. “These are young people who have almost uniformly been victims of trauma. They’re already in survival mode and then when we don’t do things that will help provide housing, they lack the stability to get beyond that.”

“These kids are just the most resilient, intelligent, tough individuals I’ve ever met,” Landrie said. “They have this huge amount of potential to be incredibly successful. They already have the life skills, they already have the grit and tenacity that they need to be successful in college, but in some cases, no one has ever told them that they’re smart or ever told them they were college material or that they can do anything they want to.

“When we support these students, they’re able to reach their own academic goals and support themselves and their families,” she continued.

Tiffani Beissel, 21, is one student who benefited from Great Expectations. She was placed in foster care at age 14 in her birth state of Missouri, and though she was adopted by a friend’s family when she was 15, that situation didn’t work out, she said. She moved in with a boyfriend, but he was abusive, and she moved to Virginia to get away from him.

“There have been so many times when I wanted to give up,” Beissel said. “When you don’t have anybody to love or care for you, it’s easy to just give up.”

But Beissel knew the statistics about former foster youth and didn’t want to become one of them. She said her resilience saw her through. She now lives with her aunt and uncle in Caroline County and will graduate from Germanna in May with an associate degree and a specialization in psychology.

Bryant also has benefited from Great Expectations. She’s now pursuing an associate degree in early childhood education and has found a stable home in Locust Grove with a member of her church.

CHS has put together a task force made up of experts in affordable housing, foster care, child welfare and education, as well as Virginia delegates and senators and aged-out foster youth, to make policy recommendations for improving access and services to youth aging out of foster care.

The task force aims to complete its work in mid-2018.

Dominique Bryant, who has a lifetime of foster care experience, ran out of options when she turned 18.

Tiffani Beissel, 21, talks about her experience with aging out of the state’s foster care system.