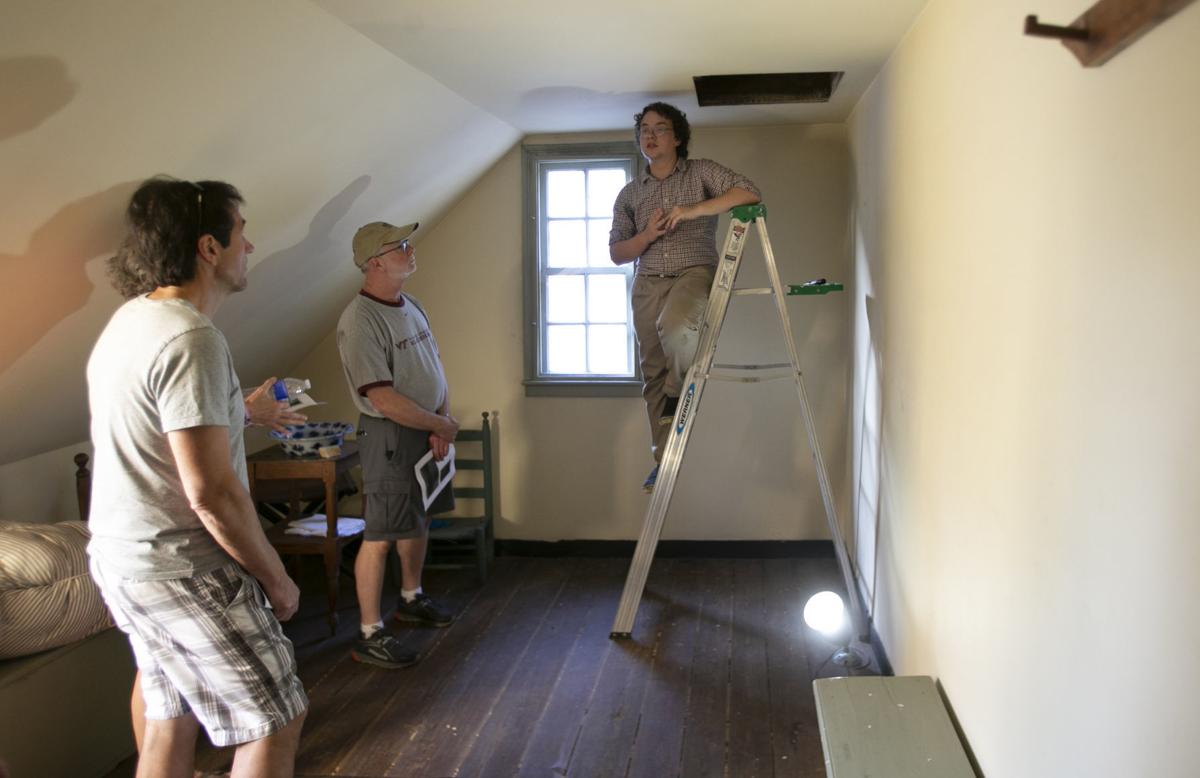 Ethan Knick, a University of Mary Washington student and employee at Rising Sun Tavern, talks to visitors before letting them look in the attic. 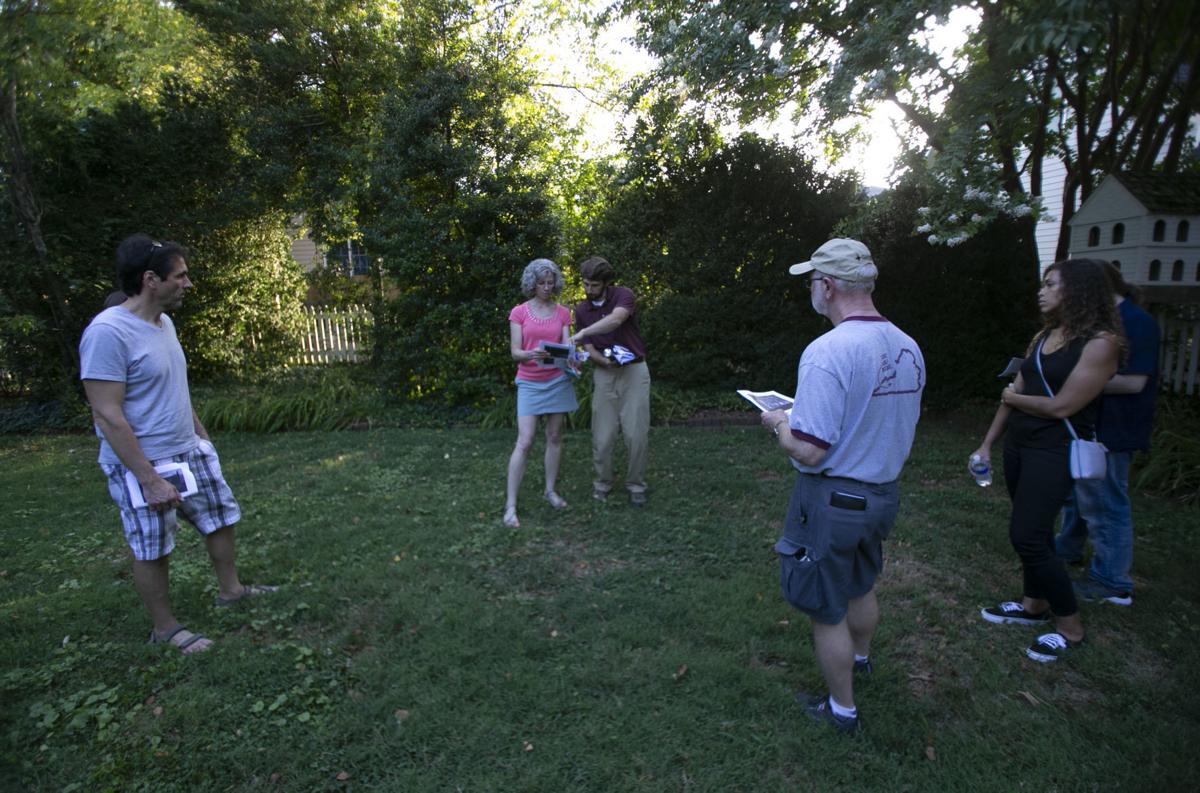 Michael Spencer, an associate professor at the University of Mary Washington talks with Kaye Dalessandro during a behind-the-scenes tour of Rising Sun Tavern in Fredericksburg, Virginia on Aug. 3, 2019. 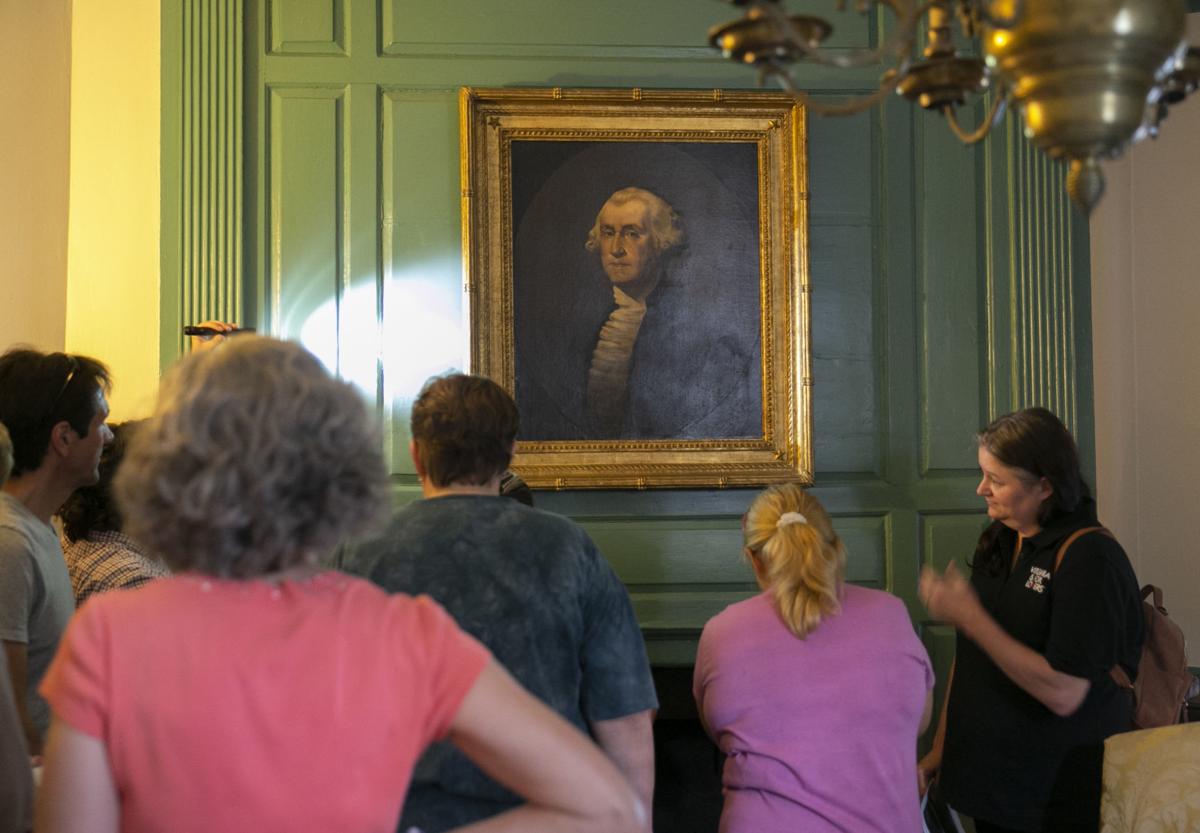 Visitors look at graffiti discovered on a mantel at a behind-the-scenes tour of Rising Sun Tavern in Fredericksburg, Virginia on Aug. 3, 2019. 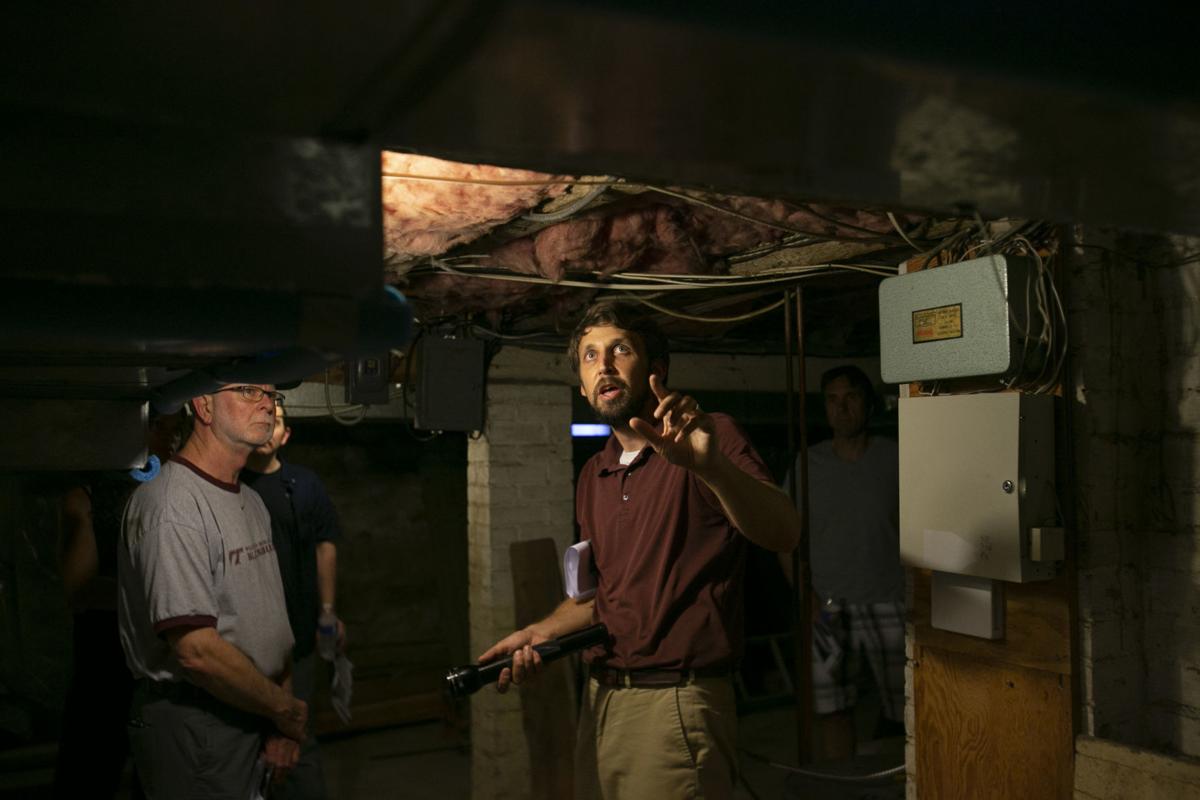 Michael Spencer, chairman of University of Mary Washington’s Department of Historic Preservation, takes visitors to the basement of Rising Sun Tavern on Saturday, when tourgoers were given access to the building’s typically concealed spaces.

Kaye and Tony Dalessandro often walk along the streets of downtown Fredericksburg, taking in not just the charm and beauty of historic buildings, but also the particular smells from the past that emanate from them.

She inhaled those scents Saturday evening, as she was among a dozen people who crawled under the porch of the Rising Sun Tavern on Caroline Street. The unusual access was part of a behind-the-scenes tour offered by Washington Heritage Museums, and Kaye Dalessandro was thrilled to squat in the dank surroundings, brightened only by the rays of flashlights.

“We’ve walked by here thousands of times, and you can smell the oldness, the mustiness, coming through here, so it’s so neat to be under here,” she said.

Tour participants had the same reaction when Michael Spencer, an associate professor at the University of Mary Washington and chairman of its Department of Historic Preservation, led them into the basement to show—and describe—the “summer beams” hand-hewn by craftsmen who built the 1760s structure. He also offered tourgoers a peek inside a corner cabinet of the banquet room, to give them an idea of previous renovations, and showed them a date, “2-15-78,” scratched into a concrete slab under the front porch when it was added in the late 1970s.

Likewise, UMW student Ethan Knick, who also works at Rising Sun, let participants climb a ladder to poke their heads into the attic. There, he perched on a beam and pointed his flashlight at two rafters, diagonally across from each other and noticeably damaged by Civil War cannonballs. He bubbled with excitement as he crouched in the heat, surrounded by itchy insulation and the occasional wasp, and talked about the “brutal” shelling that rocked the city during the December 1862 Battle of Fredericksburg.

Visitors were thrilled with the access—not only to be able to go into areas normally roped off or barricaded, but also to crawl and climb into out-of-the-way places.

“It was 100 percent awesome, very, very amazing,” said Victoria Matthews, the tourism sales manager for Fredericksburg who tries to learn about unusual tidbits of city history so she can pass them along to people looking to visit or book conferences. “I know enough to get people interested, then I turn it over to the experts.”

Jackie Reader of Fredericksburg “nabbed” tickets as soon as she saw the event posted on Facebook.

“It’s great to get a behind-the-scenes look at historic homes,” she said. “This was way better than the public tour.”

The unusual access was limited to 12 participants because of the tight spaces involved, but Washington Heritage Museums plans to repeat the event on Sept. 28 and offer other behind-the-scenes looks at properties it maintains.

Spencer described the history of Rising Sun Tavern, first built as a home for Charles Washington, the youngest brother of President George Washington. As the property changed hands over the years, its use evolved as well, and historians are trying to piece together how the walls and artifacts, the mantelpieces in the basement or the 1829 signature of a “William Libby,” carved into the front of the building, reflect its changing story.

The best way to uncover the secrets is to explore, said Spencer, who had a strand of spider web hanging from the back of his head before the tour even started.

“A lot of concealed spaces tell us so much about a building,” he said. “We always want to go into the basements because people don’t change basements. They change kitchens.”

As tourgoers descended into the bottom of the building, they could see a section on the right showing the only exposed pieces of the original hardwood floors. The spline flooring—long strips of wood that act as a splice between two wood planks—would have been there when George Washington visited his brother. Spencer encouraged people to touch the wood and feel where the Father of Our Country once walked.

Likewise, Spencer told people to look above them at the massive summer beam that ran the full length of the structure, and how smaller beams or girders were used to separate the rooms. No matter how much the interior configuration may have changed over time, historians can look, from below, to see how spaces above originally were sectioned off, Spencer said.

Steve Moore of Spotsylvania County, who called himself a “history nut,” was excited to see for himself the damage from battles or wood-carved graffiti from earlier centuries.

“It was fantastic,” he said of the tour. “I hope they do more of them.”

Matt Damon hopes Ben Affleck and Jennifer Lopez are back together

Matt Damon hopes Ben Affleck and Jennifer Lopez are back together

Ethan Knick, a University of Mary Washington student and employee at Rising Sun Tavern, talks to visitors before letting them look in the attic.

Michael Spencer, an associate professor at the University of Mary Washington talks with Kaye Dalessandro during a behind-the-scenes tour of Rising Sun Tavern in Fredericksburg, Virginia on Aug. 3, 2019.

Visitors look at graffiti discovered on a mantel at a behind-the-scenes tour of Rising Sun Tavern in Fredericksburg, Virginia on Aug. 3, 2019.

Michael Spencer, chairman of University of Mary Washington’s Department of Historic Preservation, takes visitors to the basement of Rising Sun Tavern on Saturday, when tourgoers were given access to the building’s typically concealed spaces.