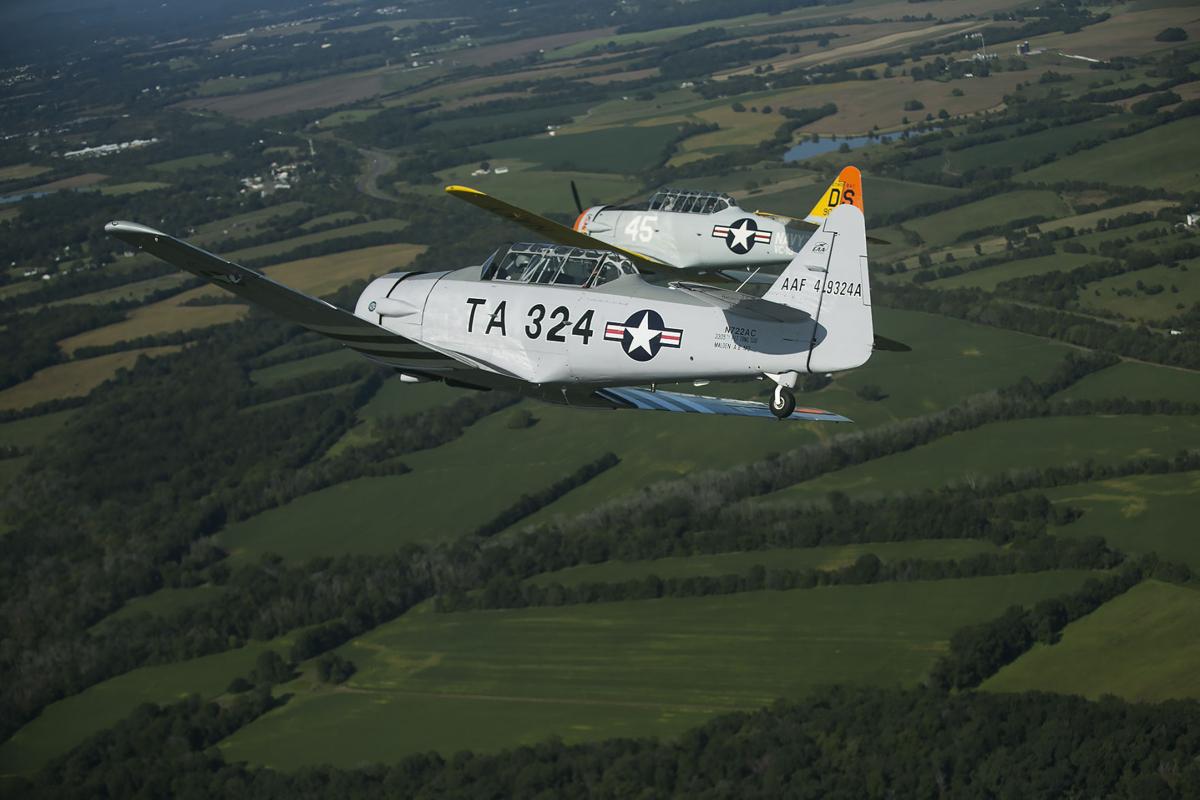 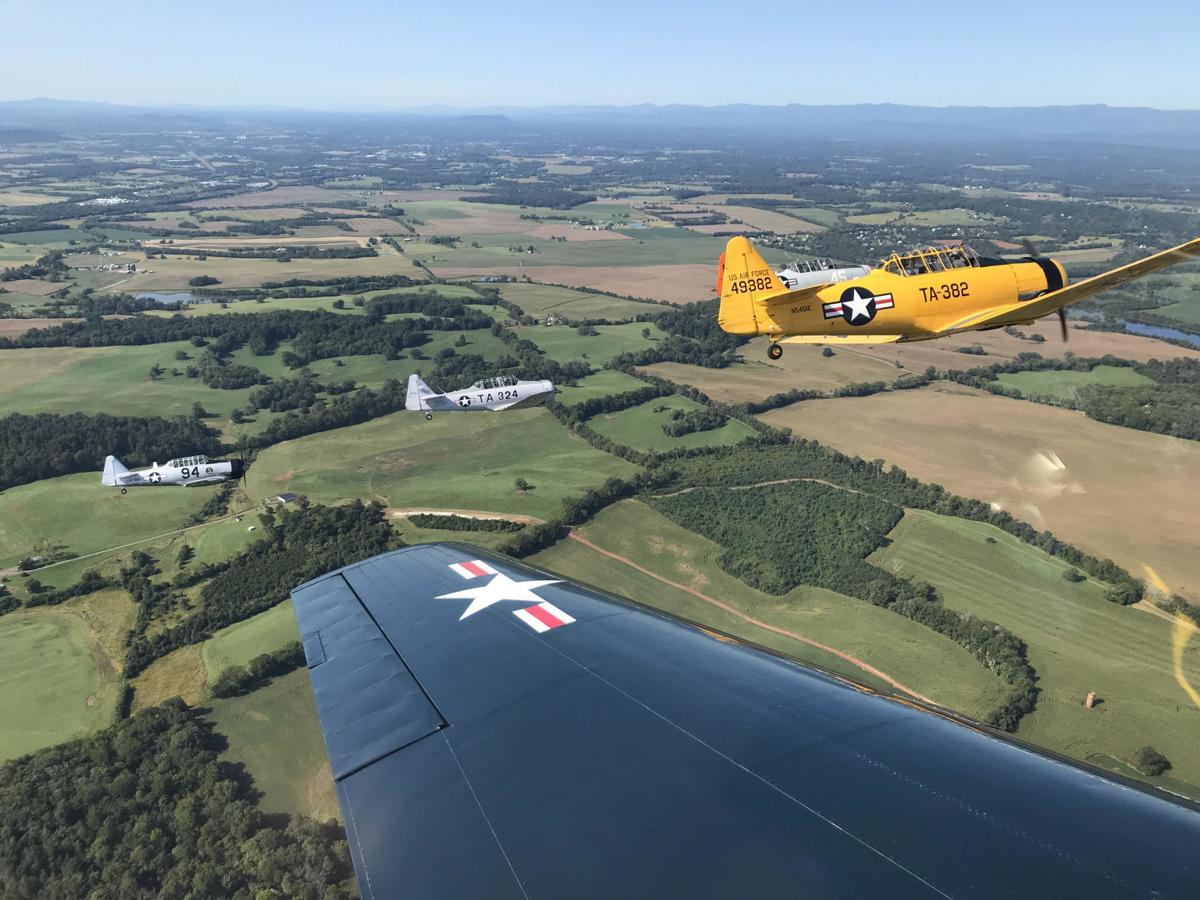 In formation over Culpeper County, five AT–6 Texans bank to the west. 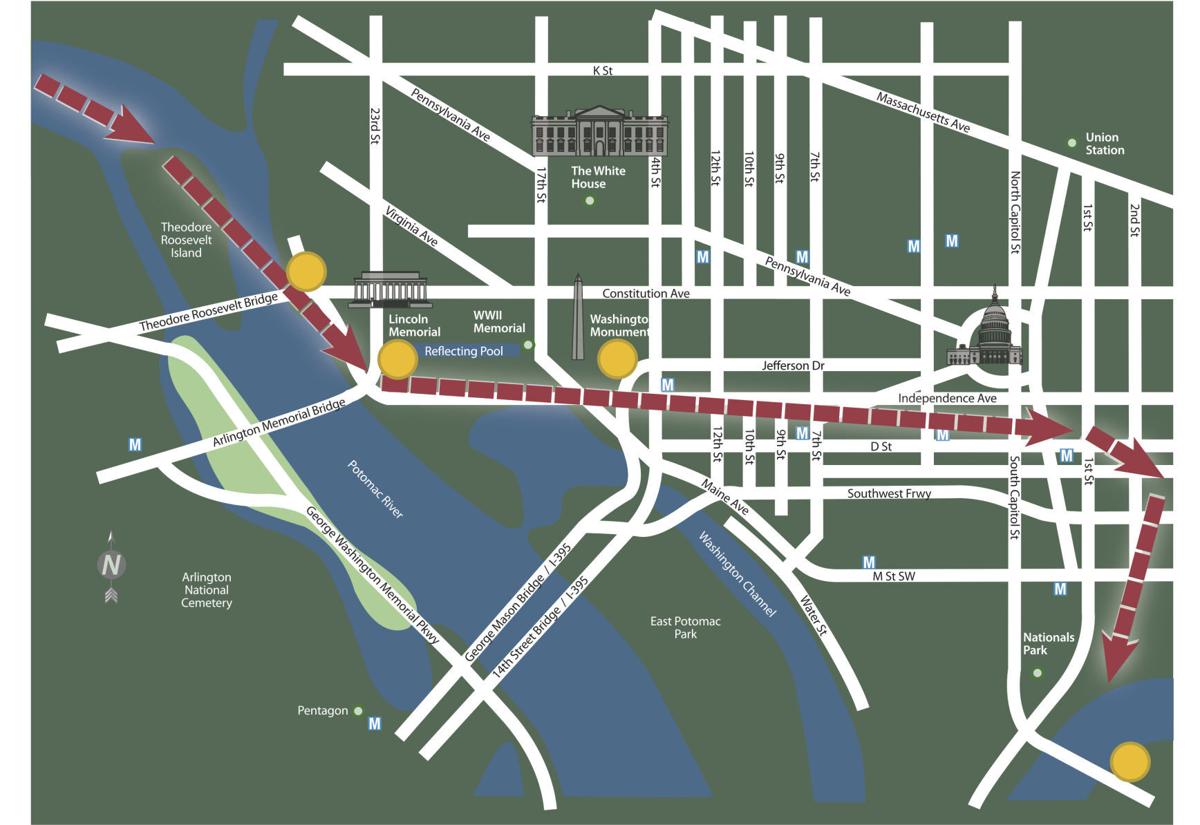 This map shows the Arsenal of Democracy Flyover’s route over the National Mall. 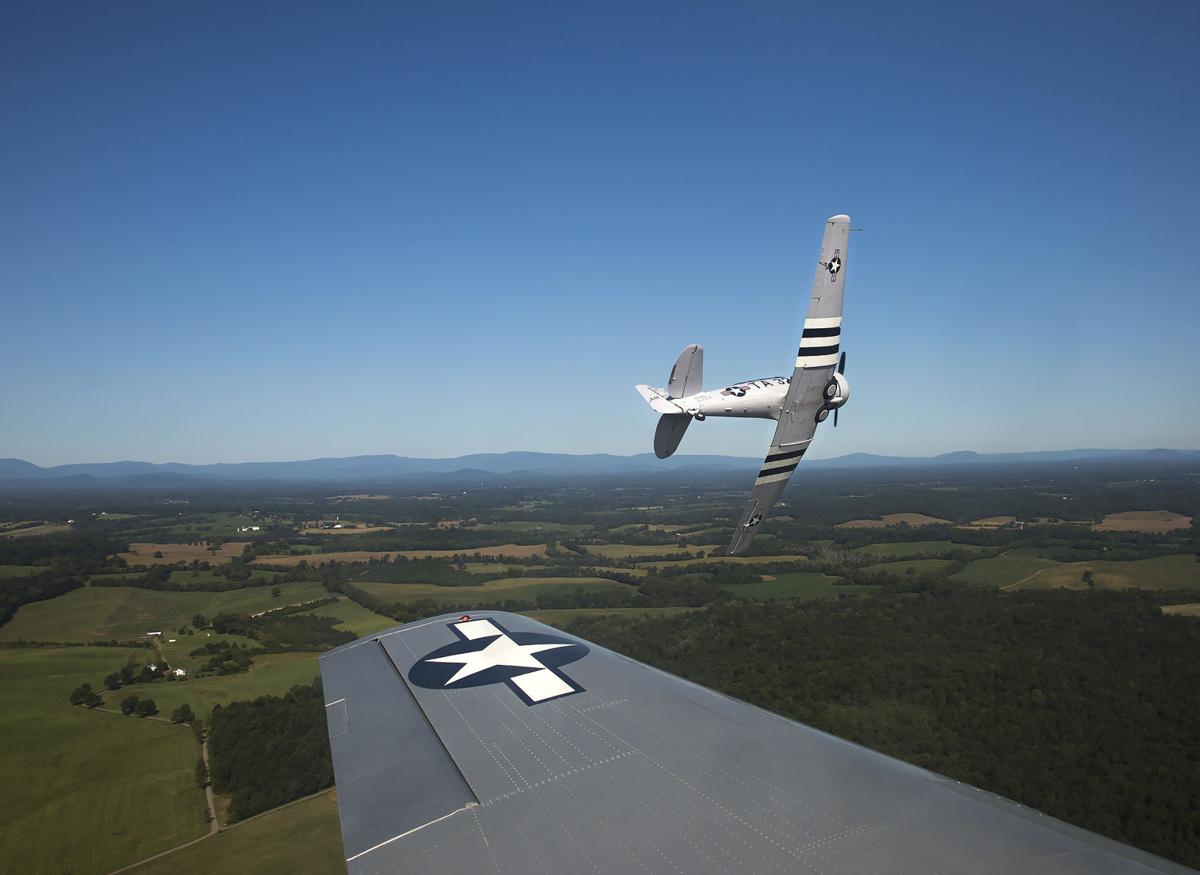 Members of the Commemorative Air Force fly in formation over the Culpeper Regional Airport on Tuesday, Sept. 22, 2020. 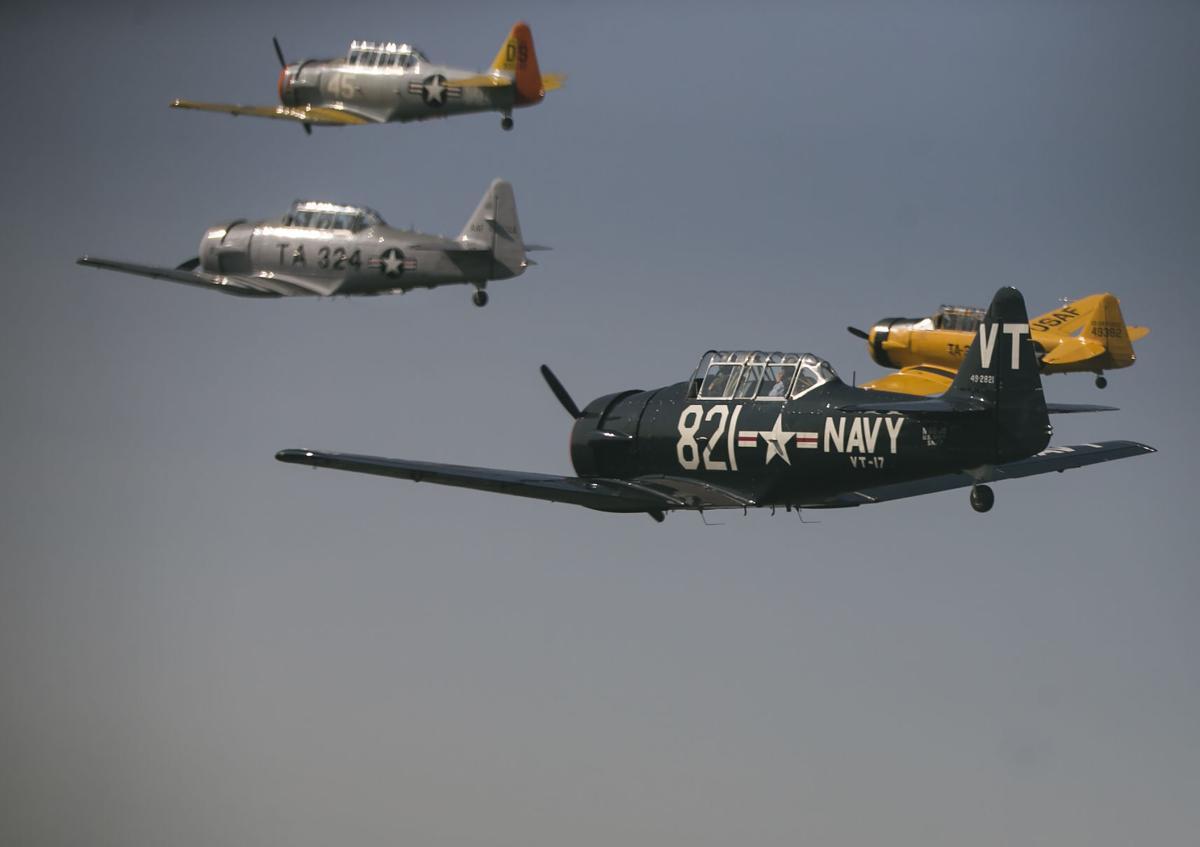 Members of the Commemorative Air Force fly in formation over the Culpeper Regional Airport. 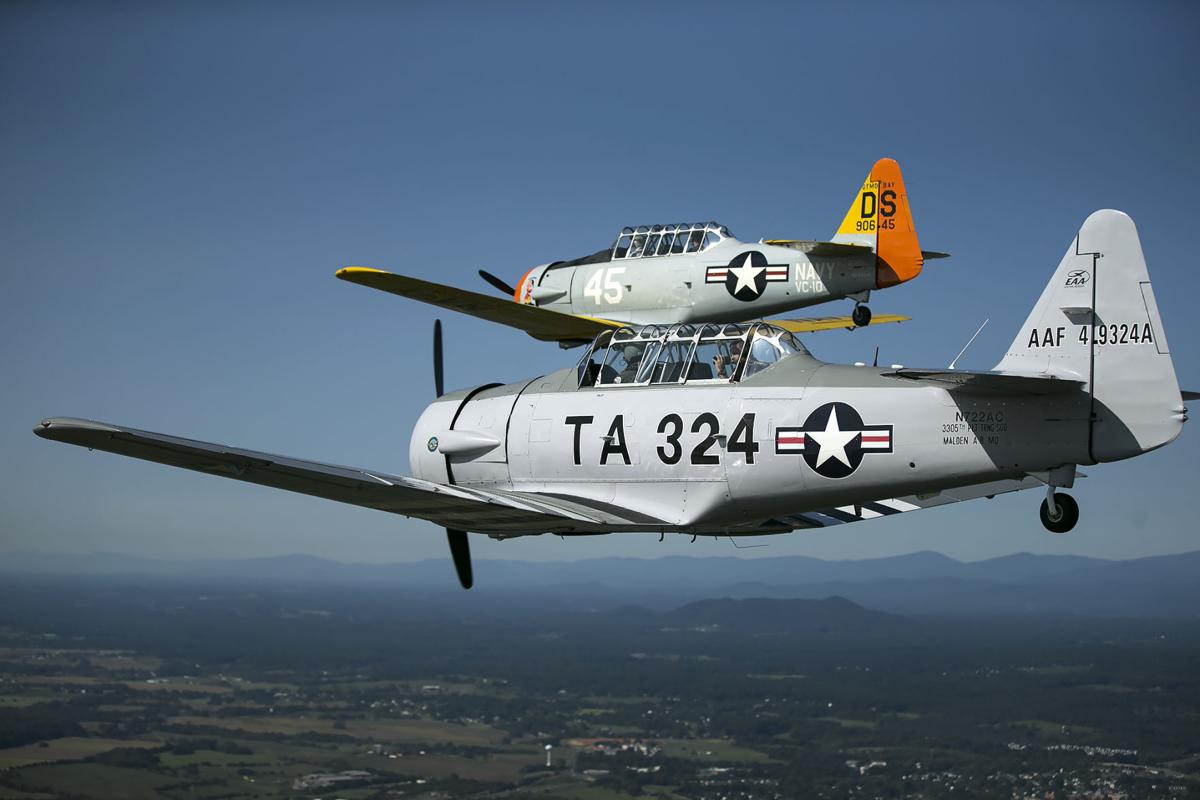 Members of the Commemorative Air Force maneuver over the Culpeper area on Tuesday, Sept. 22, 2020. The planes are among 50 rare warbirds that will be based at Culpeper Regional Airport to take part in the Arsenal of Democracy Flyover this Saturday to commemorate the 75th anniversary of the end of WWII.

Spend two minutes aloft in a T-6 “Texan,” and you’ll understand why pilots fall in love with flight.

The experience is thrilling, as close to flying like a bird as a skilled pilot’s lucky passenger can imagine.

And if this World War II aircraft is bobbing, weaving and turning in close formation with four others, as Texans were Tuesday morning near Culpeper Regional Airport, all the more delight. The effect is like an aerial ballet, with sights and sounds about as far from passenger travel aboard a jetliner as one can get.

“That was the coolest thing I’ve ever done,” said one happy back-seater Tuesday after returning to the airfield after a 10 a.m. flight over the town of Culpeper, Mount Pony and Culpeper County’s Brandy Station battlefield.

On Thursday and Friday, such aerial maneuvers will grow massive as dozens of World War II-era aircraft assemble in the air for Friday’s Arsenal of Democracy Flyover, commemorating the 75th anniversary of the war’s end.

Thursday morning’s flight will be a dress rehearsal for the complex choreography required to usher 60-plus military aircraft over the nation’s capital to honor the millions of Americans, civilians and soldiers, who joined together to bring World War II to a close.

On Friday, 24 historically sequenced formations of 61 warbirds—bombers, fighters and transport and support aircraft—will join in the arsenal’s long-planned aerial tribute over the Potomac River, Washington’s National Mall and past the U.S. Capitol.

On Tuesday, business was picking up at the Culpeper airfield as more pilots and planes—including some rarities—arrived to participate in the flyover. But organizers and Airport Manager Tanya Woodward asked the public to stay away from the airport while this week’s flyover and its practice flights are underway.

There is no public access to the airport, for both security and public health reasons. There is no public parking along the airport access road from U.S. 29, to keep it open for emergency vehicles, Woodward said. Anyone who parks on the road’s shoulder risks getting a ticket.

The flyover’s organizers ask area residents to watch the event from along the aircrafts’ route, closer to Washington, or via the live-streamed video on the arsenal’s website, ww2flyover.org, and Facebook page, facebook.com/ww2flyover.

The livestream will include interviews with WWII heroes, starting at 10 a.m. Live coverage of the first formation approaching the National Mall will start at 11:30 a.m. Organizers estimate the flights over the mall will last about an hour.

But back to that formation of Texans, and Tuesday morning’s flight over Culpeper.

It was a dream, a delight, even for an older guy who has ridden in many kinds of aircraft since he was a kid. The pilots were expert and good-humored. The skies were calm and robin’s-egg blue. And the North American AT-6s were fast and nimble, their wingtips kept apart by the sharp eyes, fast reflexes and steady practice of their pilots.

The Texan flown Tuesday by pilot David Kahley of Greensburg, Pa., entered service with the Army Air Corps on Dec. 7, 1942, the first anniversary of the Japanese surprise attack on Pearl Harbor. It was one of the U.S. Air Force’s first trainers, kept flying through the Korean War, and has been rebuilt a couple of times.

After the five-aircraft formation returned to earth after a 27-minute run, flight leader Walt Fricke—who flew a T-6 with Grumpy of the Seven Dwarves as its nose-art character—debriefed the pilots and passengers.

“I had alarm bells going off the entire time I was in there, being an air traffic controller,” the FAA’s Jon Clark joked. “[Normally], all you guys are little dots on the screen.”

Mike Ginter, the arsenal’s airboss, flew Monday in the first flight for a major sponsor that AOD hosted. “I helped most of these guys learn how to fly formations, so they let me jump in once in a while,” he said, taking a few minutes between Tuesday’s practice flights to chat.

Ginter, who retired as a Navy carrier pilot after 27 years, said warbird pilots occupy a “strong and deep” niche in aviation. They’re motivated to try and communicate what World War II meant to younger generations that have heard of it from school classes or television, but may not appreciate how all-consuming the conflict was, he said.

“We’re going to tell the story of World War II through the lens of 24 formations, 66 airplanes, going down the National Mall,” Ginter said.

“We’re going to help America remember what incredible sacrifices happened during World War II, whether it was on the home front or overseas,” he continued. “The whole country mobilized. Women went to the factories to pound rivets into airplanes and tanks and trucks while the men went off to war. And Rosie the Riveters became a thing.”

“We’re doing it to help America remember how much the Allied victory over the Axis powers ... paved the way for the world we have today. German was a mortal enemy; Japan was a mortal enemy. Now, those are two giant economies with booming countries, living their own destinies because we paved the way so they could choose them. Germany’s is probably the biggest economy in Europe.

“If the Arsenal of Democracy is viewed by people on Friday or they hear about it afterward, I hope they reflect on how their life has been enabled by what happened in World War II, because it was a tectonic shift in the world,” Ginter concluded. “Freedom won, democracy won, tyranny lost, fascism lost and 75 years later, here we are. That river keeps flowing.

“Point is, World War II was a pretty big event. And we’re going to honor that.”

On Saturday, the day after the flyover, the CAF’s Capital Wing will offer warbird rides from Culpeper in its Stinson L-5 Sentinel reconnaissance aircraft and a huge TBM Avenger torpedo bomber, giving the purchasing public a chance to fly in one of the planes that flew in formation over the capital. Rides in an open-cockpit, Boeing PT-17 Stearman biplane—also from World War II—will be available, too.

Tickets can be purchased via the wing’s website, capitalwing.org, or by emailing CapitalWingCAF@gmail.com.

If bad weather postpones the Arsenal of Demoracy Flyover to Saturday, the CAF wing will reschedule its rides for Sunday.

To learn more about the group, visit commemorativeairforce.org.

In formation over Culpeper County, five AT–6 Texans bank to the west.

This map shows the Arsenal of Democracy Flyover’s route over the National Mall.

Members of the Commemorative Air Force fly in formation over the Culpeper Regional Airport on Tuesday, Sept. 22, 2020.

Members of the Commemorative Air Force fly in formation over the Culpeper Regional Airport.

Members of the Commemorative Air Force maneuver over the Culpeper area on Tuesday, Sept. 22, 2020. The planes are among 50 rare warbirds that will be based at Culpeper Regional Airport to take part in the Arsenal of Democracy Flyover this Saturday to commemorate the 75th anniversary of the end of WWII.