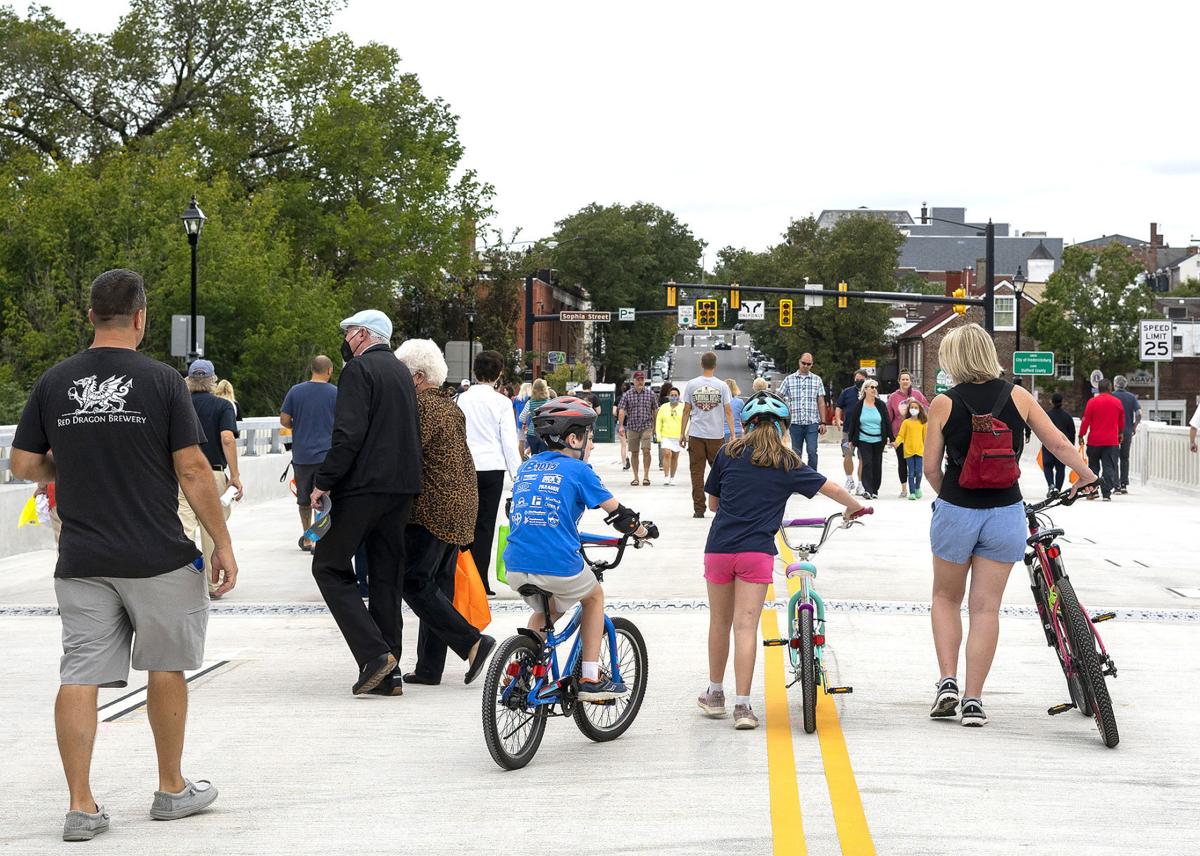 People walk and bicycle along Chatham Bridge during a reopening ceremony in Fredericksburg on Saturday. The reconstructed span linking the city and Stafford will open to motorists Sunday at 6 a.m. 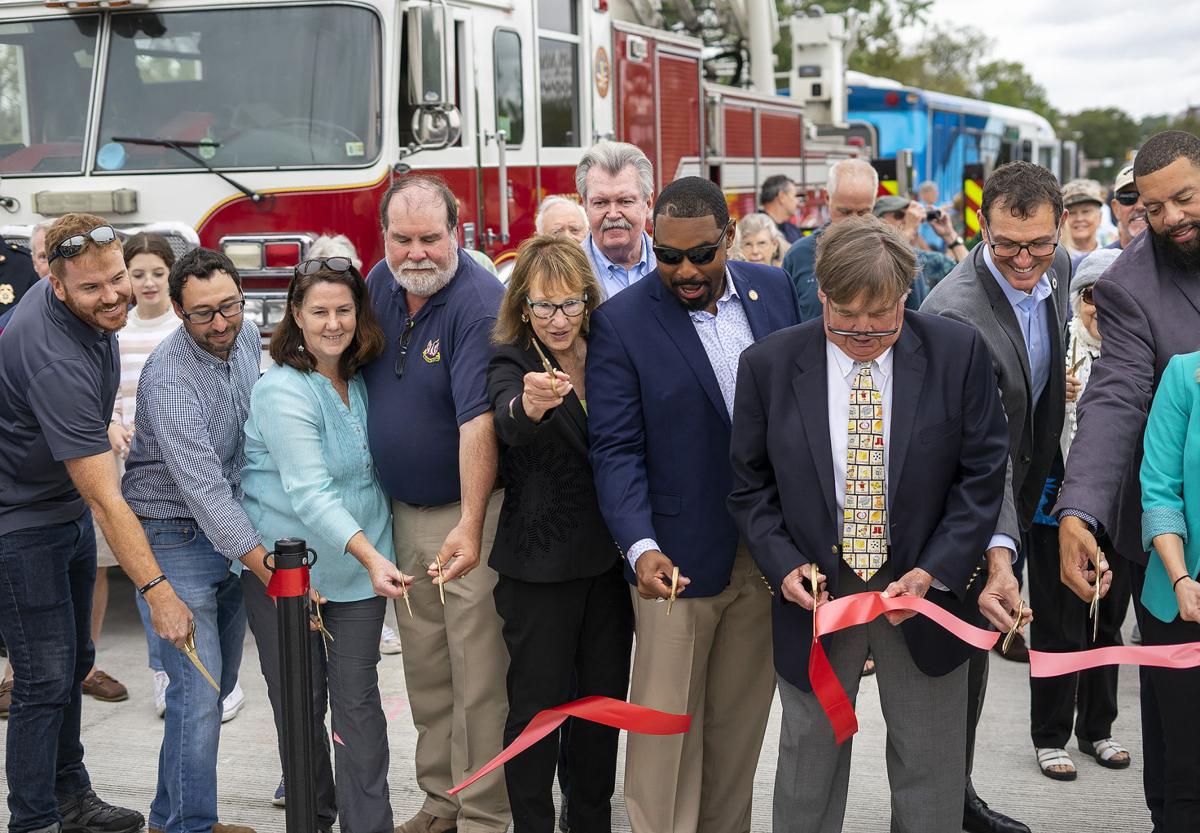 Officials cut a ribbon during the reopening of Chatham Bridge, which now includes a pedestrian–cyclist path and an overlook. 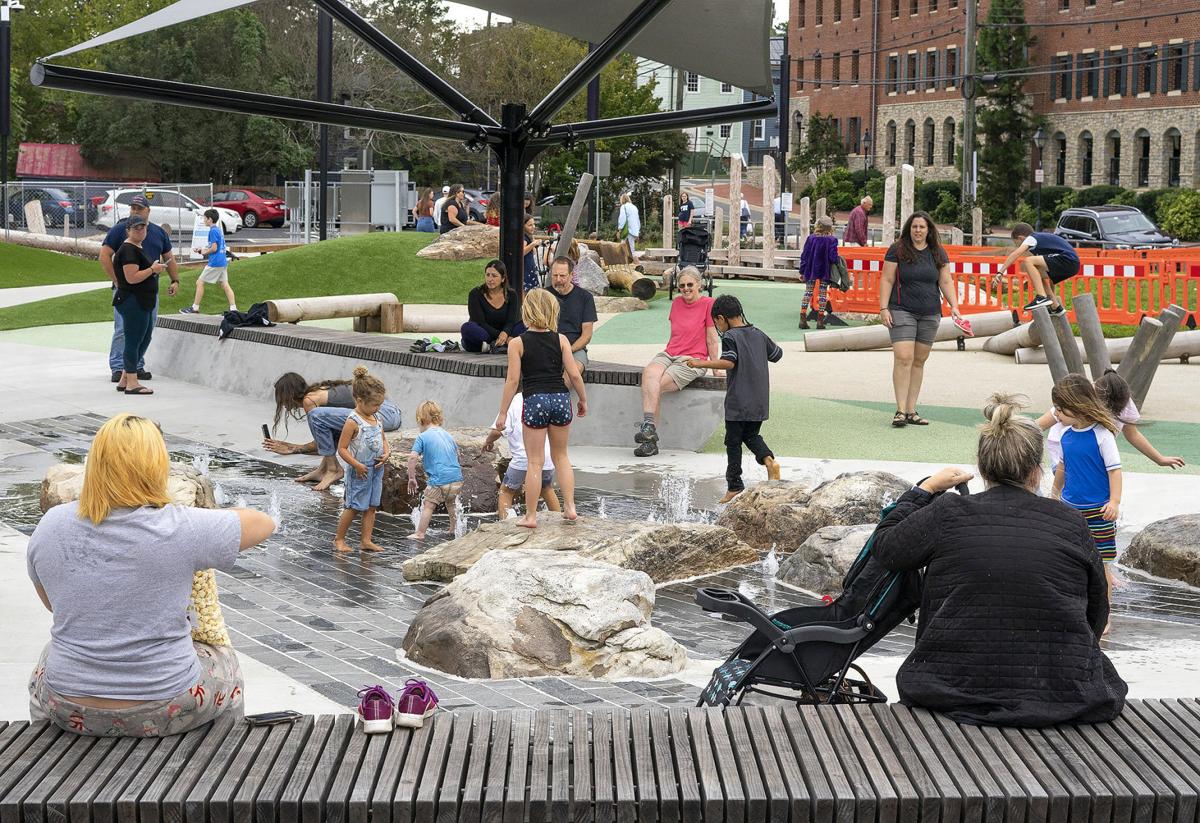 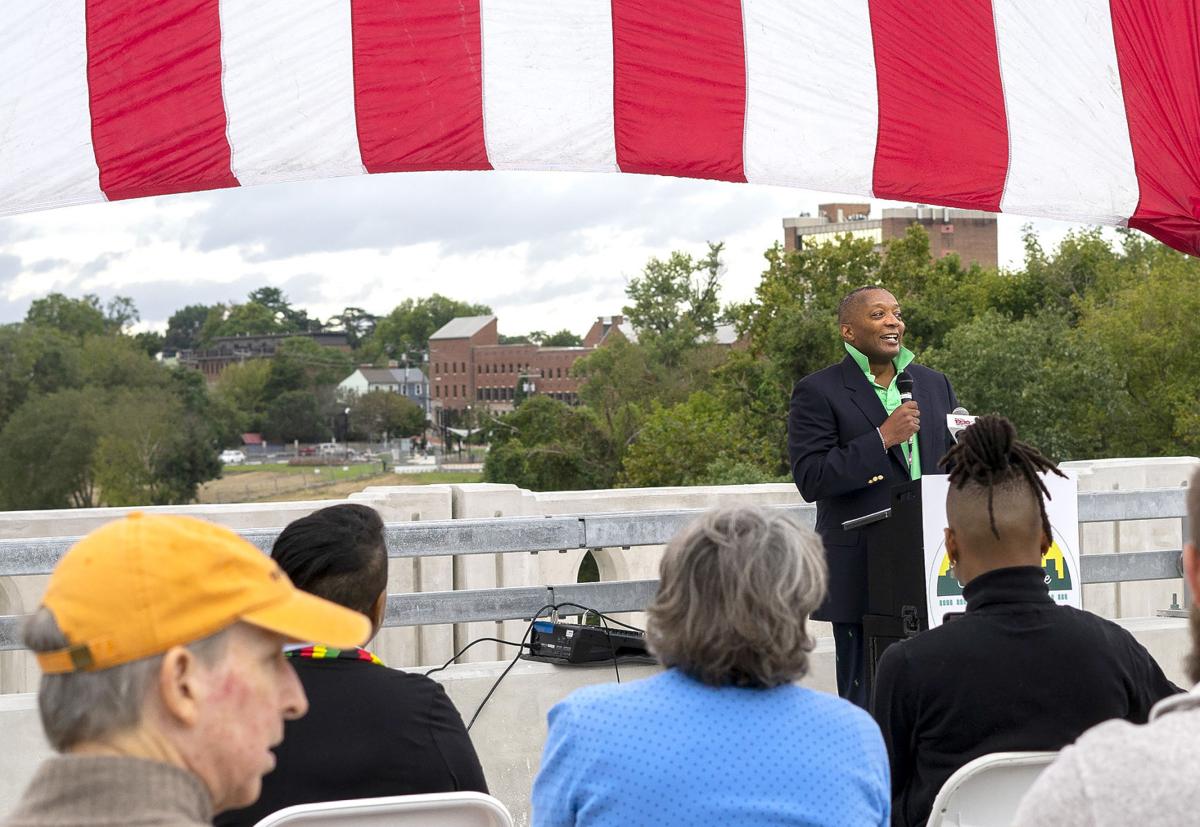 Cedric Rucker, member of the Commonwealth Transportation Board, speaks during a ribbon cutting for the new Chatham Bridge in Fredericksburg on Saturday, Oct. 9, 2021.

The amount of history surrounding the Rappahannock River in the Fredericksburg area is vast.

A ribbon-cutting ceremony occurred on the Chatham Bridge as it opened to pedestrians and cyclists. The bridge connecting Fredericksburg and Stafford County opens to vehicles Sunday at 6 a.m.

Riverfront Park also made its début with a soft opening Saturday morning as families enjoyed the $5 million open space located on Sophia Street with a view of the Rappahannock.

“Everybody who has grown up here and even people who have recently moved here, the river becomes a very vital part of their experience in this community,” Fredericksburg Mayor Mary Katherine Greenlaw said. “And we have opened it up for people to walk, to bike, to stand and take pictures and for our children to play safely in a nice park. This is a very important day for our city.”

The opening of the Chatham Bridge featured remarks from Virginia Department of Transportation representatives as well as state and local officials.

The project was completed 45 days ahead of schedule and didn’t exceed the projected $23.4 million cost.

Jim McNelis, president of the company, noted that 150 people worked on the project and there were no setbacks.

“Projects like this don’t just happen,” said Crystal Vanuch, chairwoman of the Stafford Board of Supervisors. “They are years and years of planning, prioritization and the result of much work on the state and local and federal levels to much persistence.”

State Sen. Bryce Reeves, R–Spotsylvania, said he often looked at the Chatham Bridge, which was constructed in 1941, and wondered how long it would hold up. He said he had watched concrete fall away from the sides of the structure.

The bridge was determined to be structurally deficient by VDOT.

Reeves said the early completion of the project shows “how real government is supposed to work.”

“This is progress come to fruition,” Reeves added.

The reconstructed bridge is 57 feet wide, compared to the former structure that was 50 feet. A key component is the pedestrian and bicycle lane, which is 8 feet wide and has an overlook of the river at its midpoint.

The pedestrian–cyclist path is separated from vehicular traffic by a concrete wall topped with a metal railing.

Longtime Stafford residents Harold and Elena Janewein said they’re grateful for the wide pedestrian area and overjoyed that the bridge is reopening. Elena Janewein said her hairstylist is in downtown Fredericksburg and it was an inconvenience to have to drive a different route during the past 16 months.

“We always used the Chatham Bridge and it’s been a disaster having to go to Route 1 or the Blue and Gray Parkway,” Elena Janewein said. “So we’re very happy it’s open and we’ll be able to traverse the Chatham Bridge.”

Greenlaw said the pedestrian–cyclist bridge aligns with the city’s vision for connectivity. She said the eventual goal is to connect Motts Run Reservoir with Dixon Park.

Families were out early Saturday morning along with representatives from the Athena Construction Group, the general contractor for the project.

“I’m overjoyed,” said Melissa Schneider, vice president of Athena. “As a citizen of the city, I’ve been just as anxious to get the park open and get everybody out here. I’m proud of what we done. I believe it’s a beautiful addition to the riverfront here on Sophia Street.”

The picnic area, the main sidewalk, the water feature and all but one play feature are available.

The areas that remain separated by orange barriers are undergoing growth, Schneider said. There will be 1,500 plants and more than 90 trees in the park, she added. There will also be restrooms, a performance stage and an interactive history feature added in the future.

City resident Kevin Klumpp said he kept a close eye on construction and was eager to get out on Saturday with his family.

“I think it’s a great community resource,” Klumpp said. “I love the design. It really makes great use of this spot. It highlights the river very nicely. It’s something I’d like to take people to when they visit.”

NASA and SpaceX count down to Halloween launch

NASA and SpaceX count down to Halloween launch

People walk and bicycle along Chatham Bridge during a reopening ceremony in Fredericksburg on Saturday. The reconstructed span linking the city and Stafford will open to motorists Sunday at 6 a.m.

Officials cut a ribbon during the reopening of Chatham Bridge, which now includes a pedestrian–cyclist path and an overlook.

Cedric Rucker, member of the Commonwealth Transportation Board, speaks during a ribbon cutting for the new Chatham Bridge in Fredericksburg on Saturday, Oct. 9, 2021.