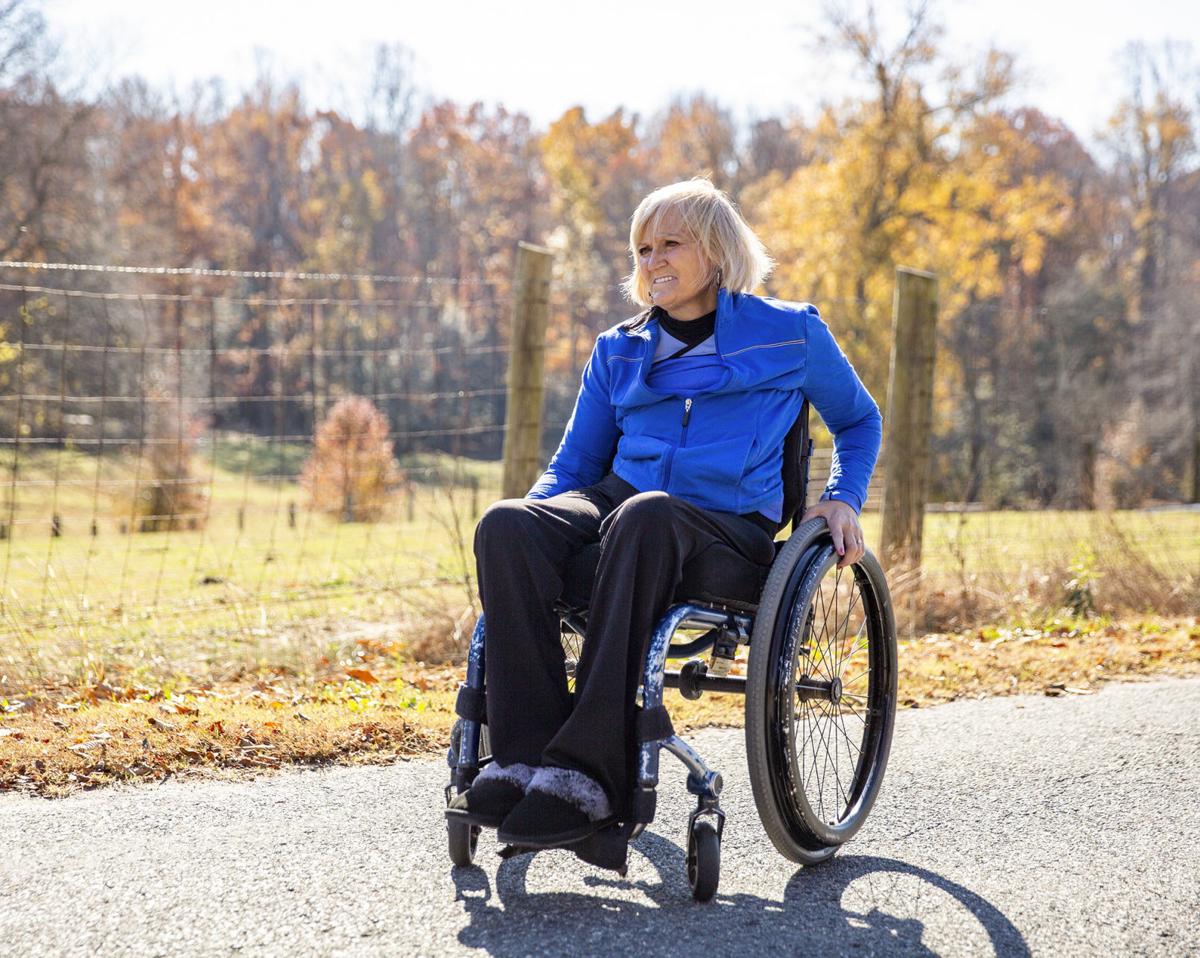 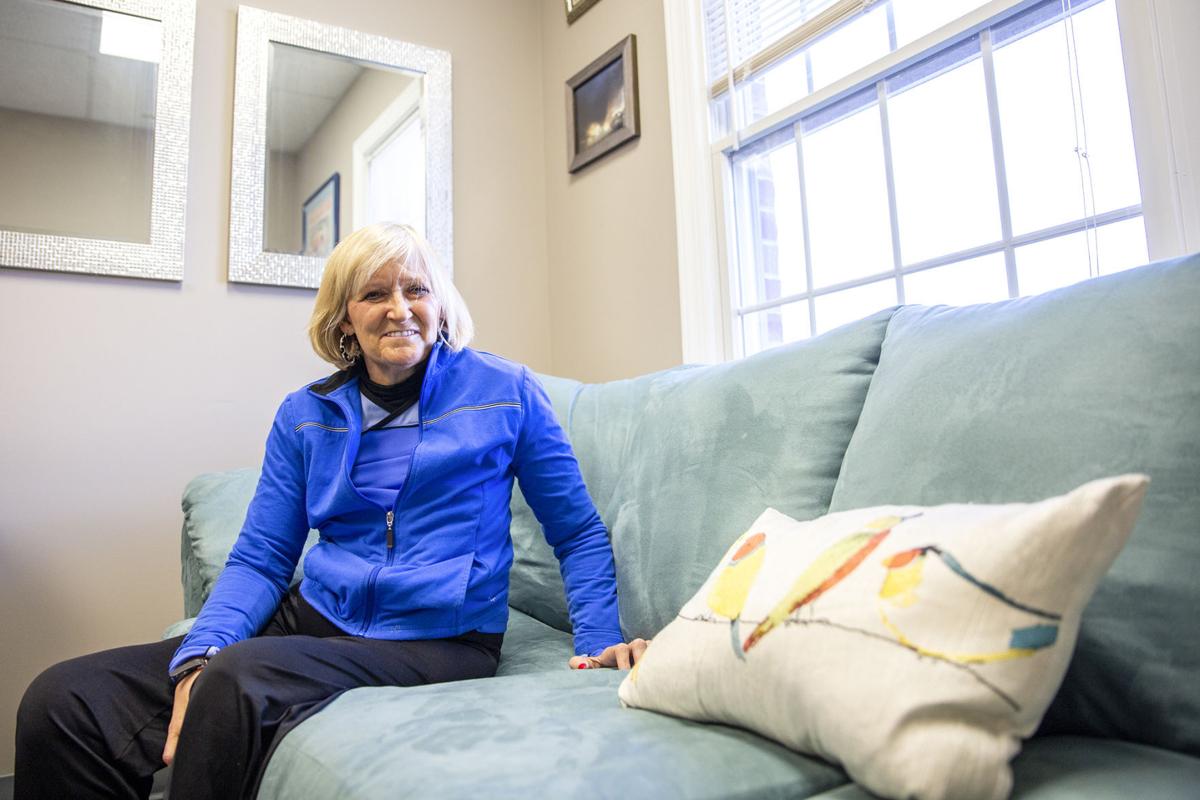 When Mary Mannhardt says she’s grateful for the gift of life, she’s not just reciting a Thanksgiving day sentiment, shared every November around a turkey-laden table.

Five times over the years, when eating disorders consumed her and depression, a broken marriage and financial ruin made her feel like she was sinking “further and further down into a dark pit with no ladder,” she tried to take her own life.

The first time, she swallowed the contents of every bottle in her parents’ medicine cabinet. Then she jumped off a bridge and was left paralyzed from the chest down when she landed on an ice block in the river. She was only 18 then, a world-class runner who had dreamed of racing in the Olympics.

Even after she recovered and thought she had found peace with the new course of her life, the demons resurfaced again. Three more times, Mannhardt took every drug she could get her hands on.

But each time she teetered on the brink of death, she miraculously survived. Loved ones were able to get her help in the nick of time. As thankful as she is to be alive, Mannhardt is equally grateful that her family doesn’t have to mourn her loss.

The 58-year-old Spotsylvania County resident is certain that all the harrowing bumps she faced along the way, even an ice block in the Susquehanna River, led her to where she’s supposed to be. Therapy, a good support system of friends and family and a strong faith in God have kept her afloat.

Mannhardt wants to help others who have mental illnesses, marital problems or other reasons that might cause them to be “standing on a bridge, ready to jump.” She became a licensed professional counselor in 2019 and this year she self-published her second autobiography, “Client to Clinician: Moments on My Path,” a brutally honest account of her life.

“They say God has a purpose and plan for everyone, and I feel like the way it evolved, this was God’s plan for me,” Mannhardt said. “I feel like the experiences I’ve had have made my life richer. When I was so deeply depressed, I couldn’t feel the love of people and I didn’t even have a love for people. I was so focused on myself, my grief, my low self-esteem, my sense of failure. But I feel like that has been replaced.”

These days Mannhardt finds herself “wheeling,” as she calls it, through her Chancellor-area neighborhood. Several times a week, she maneuvers her wheelchair from her ranch-style home through quiet streets, up and down a few hills and to a meandering pasture often dotted with cows. It’s peaceful there, except for a crowing rooster whose spurs intimidate her.

Over the years, Mannhardt has fought against mental issues as well as physical ones, when pressure sores seeped down to her bones and kept her in bed for months. She believes staying active is one of the best things for her body and mind.

One of her neighbors saw her out wheeling in all kinds of weather, said her friend Letha Jones. The neighbor’s mother-in-law, who lived with her, dealt with depression and was called to the window to watch Mannhardt.

“If she can do that,” the neighbor said to her mother-in-law, “then you can get out there, too.”

“When you see someone who pushes themselves, it makes you want to push yourself,” Jones said. “Mary’s determined, but she’s gracious and very understanding and empathetic for those who have a rough go of it.”

Probably because she knows the feeling.

Mary Wazeter (her maiden name) won acclaim as a high school long-distance runner and earned a scholarship to Georgetown University. But she also was obsessed with calories, convinced that if she dropped 10 pounds off her thin, 5-foot, 4-inch frame, she’d run even faster.

“It was like an addiction that I just couldn’t let go of,” she said in a 2013 Free Lance–Star story about eating disorders.

That led to the first suicide attempt, a drug overdose, and the second, the jump off the bridge. After a year of mental and physical recovery, her experience attracted a lot of attention. She told her story in People and Sports Illustrated magazines, in The New York Times, on TV talk shows and in her first autobiography, “Dark Marathon.”

She wanted to go into counseling to help other girls struggling with weight issues. But Mannhardt would lose everything—again—before that could happen.

Mannhardt got married, had a nice home and designer clothes. She thought her life was set—until the relationship ended after 10 years, she lost her job as the result of another suicide attempt and was practically homeless.

“I never expected to go back into depression in my 30s and 40s,” she said. “I thought I had been healed. I thought I was through with it and when it came back, I was really almost like double-depressed because I had known recovery and I had done public speaking. When that hit me, it was just like a pit I couldn’t get out of.”

At the urging of her sister, Judy, who had pushed herself to the brink of exhaustion, constantly trying to save her sibling, Mannhardt moved to the Fredericksburg area. All she could afford was a low-income apartment, which she shared with a roommate.

She didn’t know a soul and her living situation was so bad that she was struck by how far she’d fallen—again. She felt like “a complete and total failure” and in a weak moment, overdosed. When she survived once more, she decided God had given her yet another fresh start—and she needed to stop what she called her “stinking thinking.”

“I could either stay sulking and stay depressed or try to go forward,” she said. “I really tried to change my thought patterns and began to pray a lot more.”

She joined Grace Church of Fredericksburg and got connected with the Virginia Department of Vocational Rehabilitation, which paid for her classes to become a licensed counselor. She had earned a master’s degree as a school counselor earlier in life.

Mannhardt completed the coursework and took her certification test a few times before she passed. Because of ongoing pressure sores and other health problems, it took her twice as long to become certified, but she didn’t give up. She did her residency at the church’s facility, Grace Counseling Center, where she works full time.

She keeps a gratitude journal in which she regularly records the positive things in her life. She’s shifted the focus from herself to ways she can help others, such as volunteering as a hospice worker and hospital chaplain. She’s aware that her diagnosis, major recurring depression, means her dark days could return, but she knows how to recognize a setback—and fight it.

“I feel like I have tools now that help my own mental health,” including balance, exercise and some time alone for solitude—but not too much, she said. “I try to surround myself with good friends, positive people.”

Her counseling supervisor, Pastor Jeremy Pendergraft, said “you can’t help but be inspired by Mary’s life.”

“What powers her, what enables her to get up day after day, I would say, is hope,” he said. “She really wants to help others. She knows what it’s like to battle those demons, those negative thoughts, and her passion is to help others who are similarly fighting through in their own ways.”

Mannhardt often tells new clients how she came to be in a wheelchair. If they ask how she dealt with her depression, she shares scripture and positive books that helped her.

“If you have someone who has gone through something that was three times worse than what you’re experiencing, which is often the case when you look at Mary,” Pendergraft said, “and they were able to come out on the other side healed, restored, victorious or whatever you want to call it, it inspires hope.”

That’s how Esmerlda Medina views the marriage counseling she and her husband have gotten from Mannhardt. The counselor listens to both spouses, offers recommendations and has been such a positive influence, Medina said her two sons can see the difference.

“If [Mannhardt] can succeed and she can be happy after everything she’s been through, then we can accomplish anything together,” Medina tells her family. “I am extremely grateful, especially at Thanksgiving.”

Mary Mannhardt specializes in counseling from a Christian perspective and uses a lot of scripture in her tips for overcoming depression. They include:

This is a list of some of the weather-related closings in the Fredericksburg area for Friday, Jan. 21.