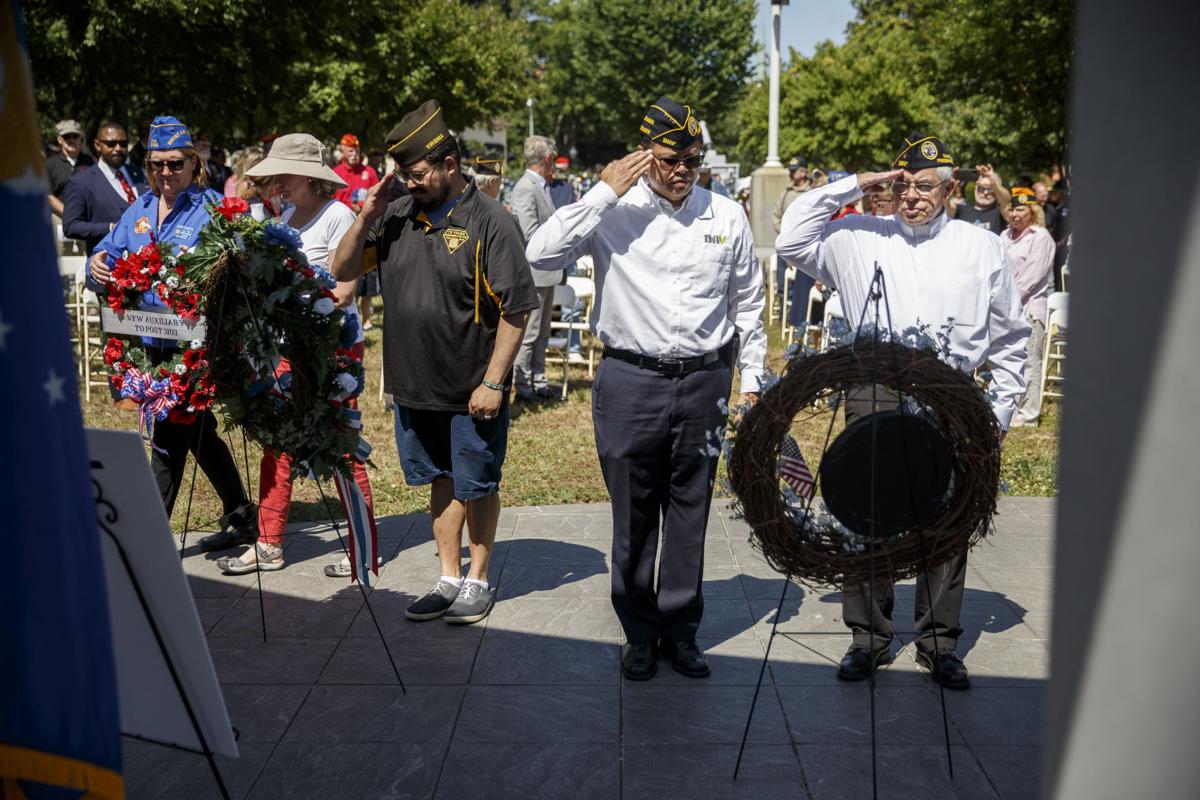 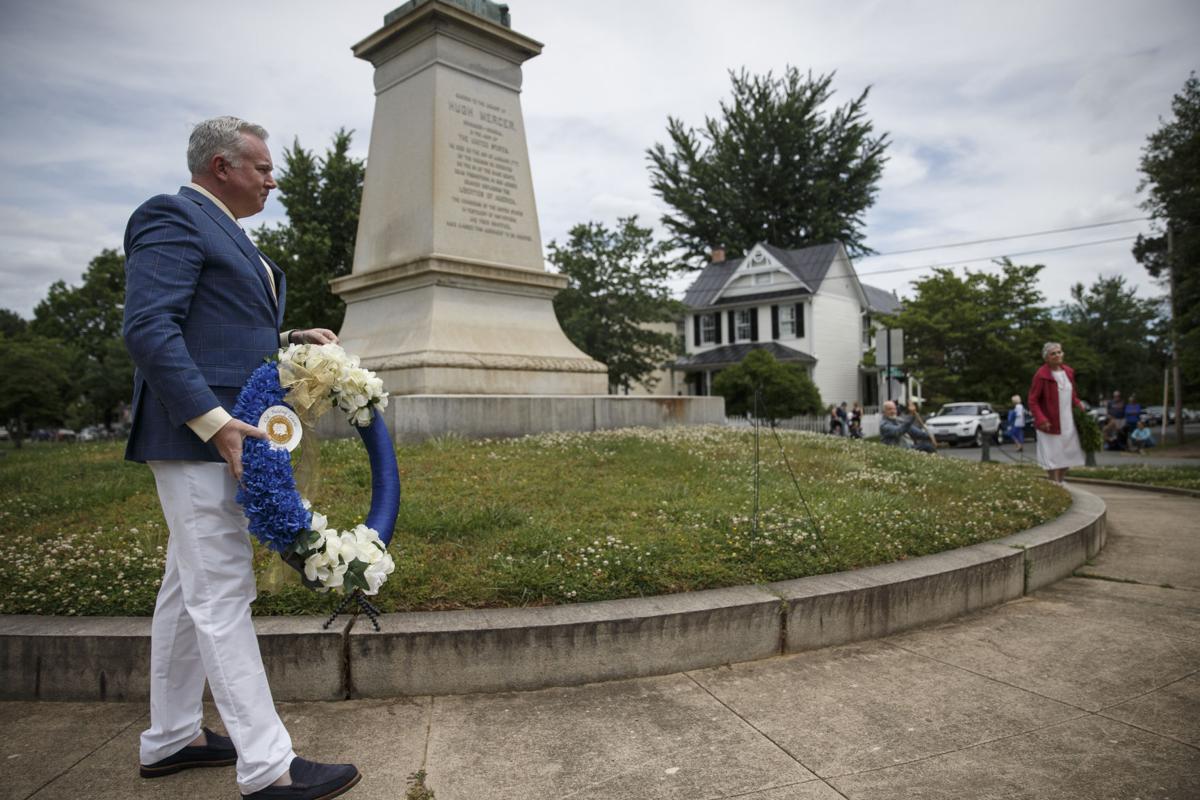 Seth Roderick of the Sons of the American Revolution places a wreath at the Hugh Mercer Statue downtown. 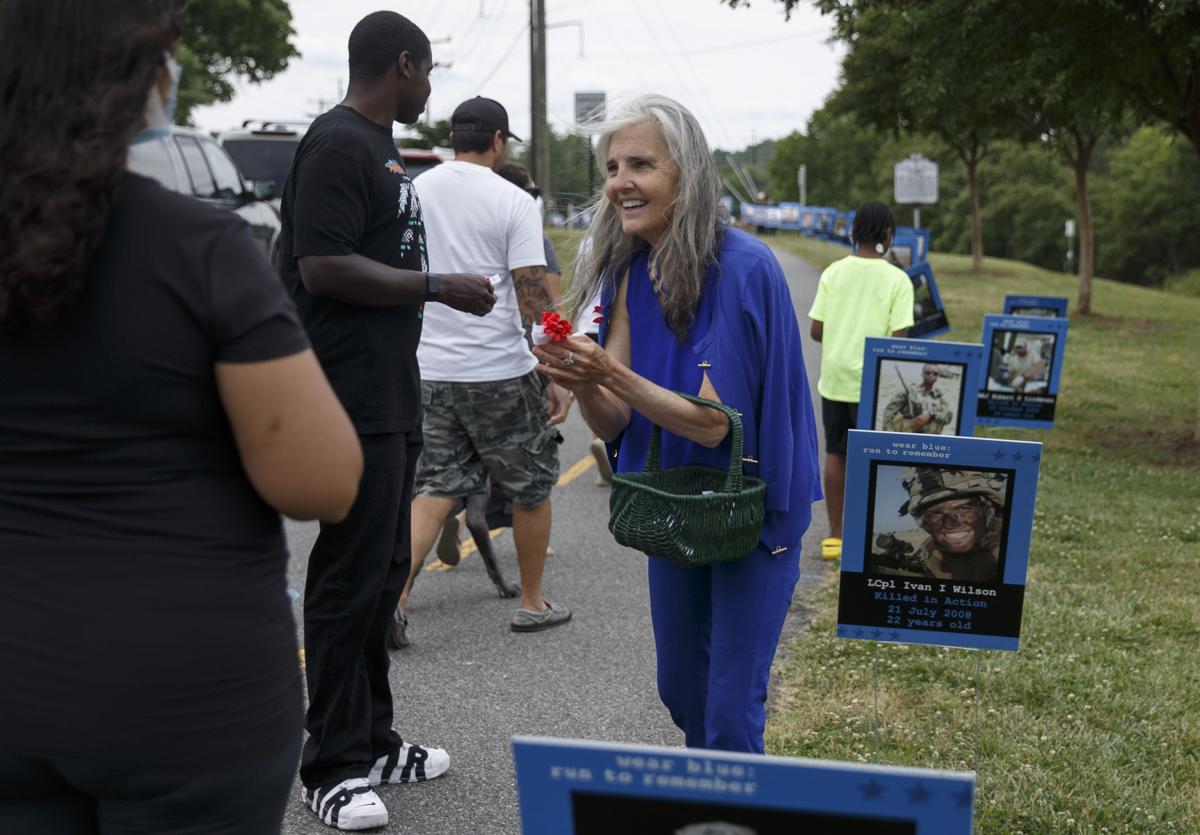 Retired teacher Mayo Carter honors those lost to war by handing out poppies along the canal path in Fredericksburg on Monday. 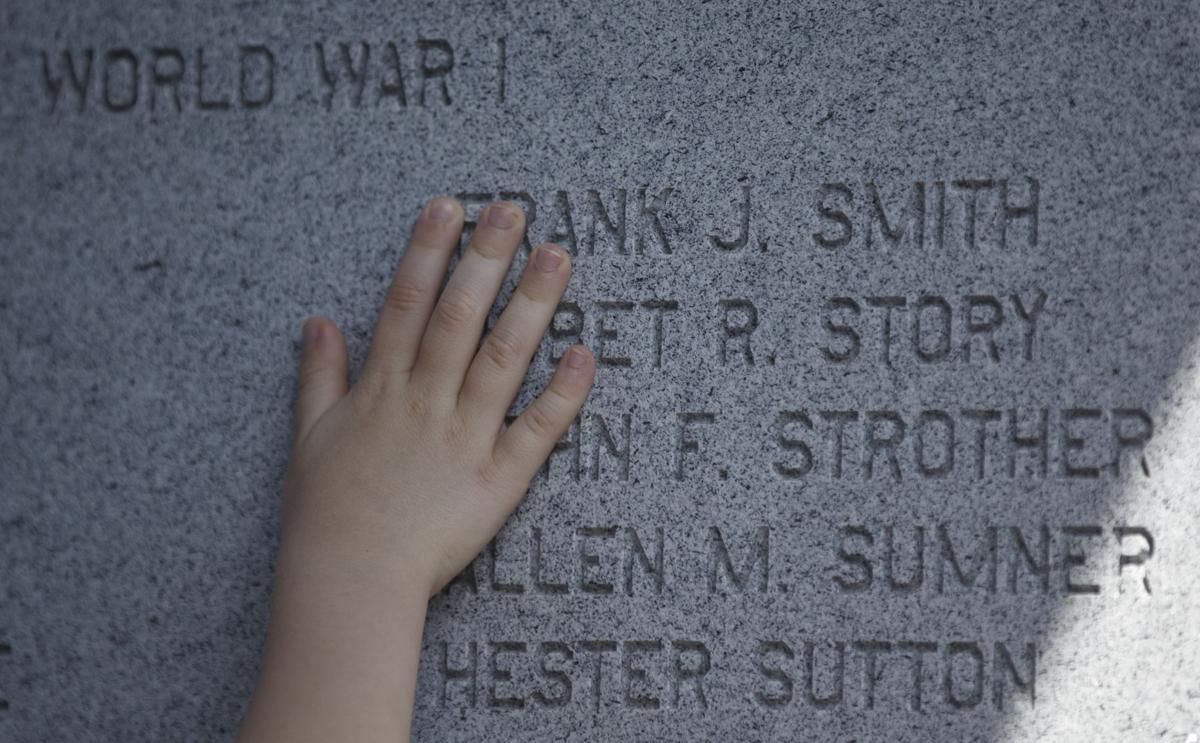 A young visitor touches some of the names of fallen Fredericksburg-area soldiers from World War I following the annual remembrance. 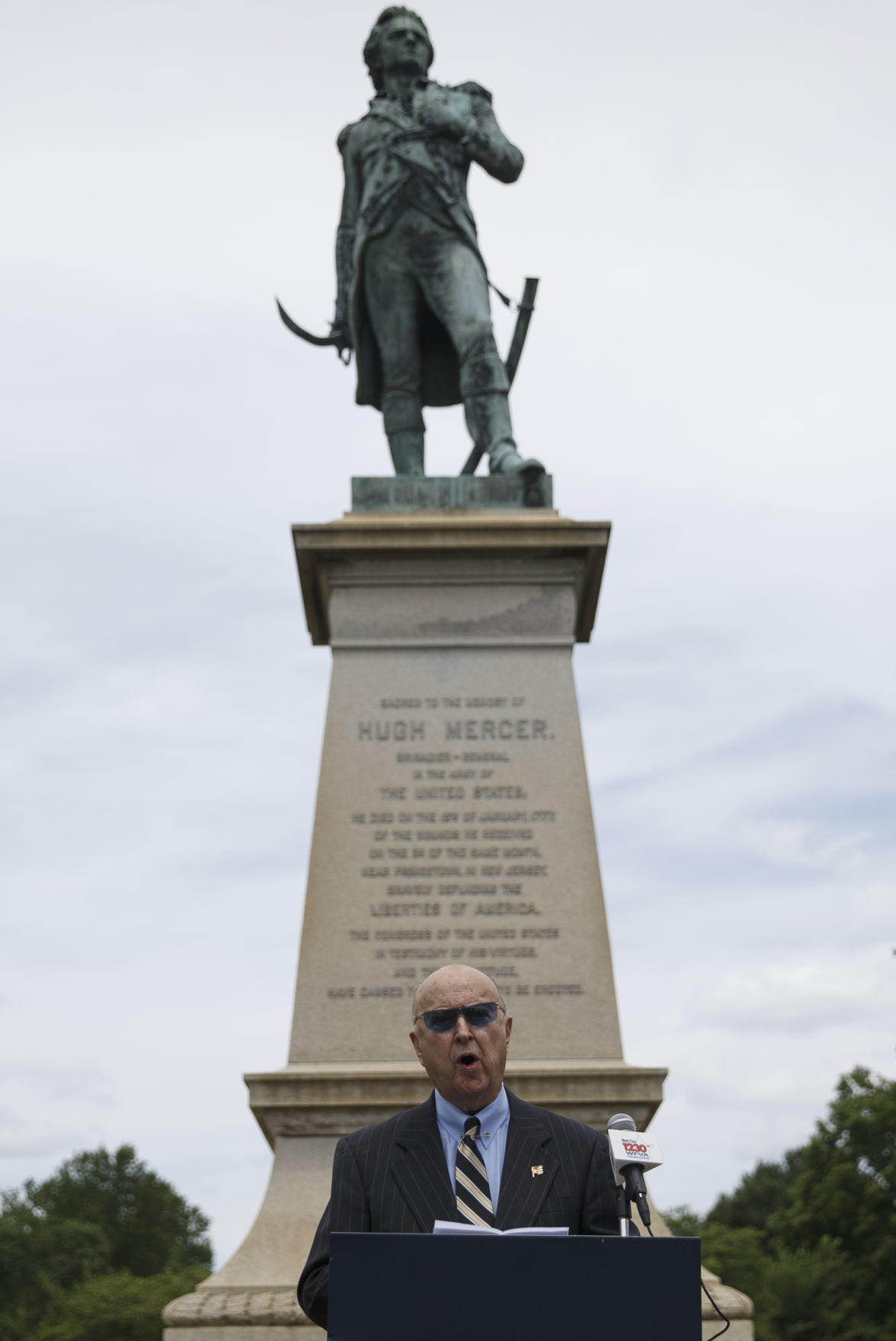 Two days of rain gave way to blue skies and warm sunshine Monday in time for the Fredericksburg area to remember and pay tribute to the men and women of America’s armed forces who died serving their county.

Joanne O’quinn of Caroline County lost her uncle at Normandy Beach during World War II. She believes Memorial Day should be celebrated year-round.

“I have freedom because of all these fallen veterans,” said O’quinn. “We should honor them and their family members who have to go through the grieving process, restarting their families all over again without their fathers or brothers.”

Fredericksburg resident Karen Zawora, whose daughter serves in the U.S. Navy, fears some Americans may not understand the true meaning of Memorial Day.

“When I grew up, we saw Vietnam on the television every single night, we saw people lose their family members every night and I am afraid now, people sometimes forget that we are in war,” said Zawora.

The city’s official Memorial Day ceremony at the Fredericksburg Area War Memorial drew a large crowd of veterans and their supporters, who filled the small city park to capacity at the intersection of Liberty, Barton and George streets.

“These incredible men and women gave their lives for us so that we could enjoy all the things we enjoy, including the ability to protest,” said Fredericksburg Mayor Mary Katherine Greenlaw. “This wonderful reminder enables us to remember every day, but I love it that we can gather this Memorial Day.”

The city and much of the region held off on Memorial Day ceremonies last year due to the coronavirus pandemic and many guests were delighted the events could happen again.

“For us to take the time today after having been separated for over a year, I think makes the day even more special,” said Rep. Rob Wittman, R-1st District. “We come together today to honor those who have given that last full measure of devotion to duty because we understand how critical that is to us as a nation.”

In addition to Greenlaw and Wittman, several other speakers addressed the afternoon gathering sponsored by the Fredericksburg Area Veterans Council. Army Master Sgt. Lisa Gregory, chair of the Fredericksburg Area Veterans Council, delivered the keynote remarks, saying that since the birth of the nation, Americans have raised their hands voluntarily to serve and put themselves in danger because, “we felt it was the right thing to do for our country.”

“We’re not here to memorialize war,” said Gregory. “We’re here to remember our brothers and sisters who never made it back.”

Ann and Paul Lusher of Fredericksburg have been regulars at the city Memorial Day event for the last 36 years.

“It’s always moving, every year,” said Ann Lusher. “It’s moving to think about the people who have sacrificed their lives so that we can do what we do with our freedom.”

Retired Army Chief Warrant Officer Bob Betts said Monday’s ceremony was solemn, and a fitting remembrance to those lost on the battlefield.

“I’m here for a family member as well as for friends who didn’t make it back from Vietnam, as well as other wars,” said Betts. “I was one of the lucky ones.”

Several other Memorial Day events were also held Monday in the city, including a noon wreath-laying at the Gen. Hugh Mercer Monument on Washington Avenue to honor the Revolutionary War officer who some say has been overlooked in Memorial Day remembrances of years past.

Anne Darron, executive director of the Washington Heritage Museums, said a wreath was first laid at the memorial on Memorial Day 2019 to honor Mercer.

“Prior to that, there wasn’t any observance at the monument,” said Darron.

Mercer, a Scottish soldier and physician, later became a general in the Continental Army and friend of George Washington. After being killed in the Battle of Princeton in 1777, he became a hero and rallying symbol of the American Revolution.

“He was the very first general to ever have been bayonetted in hand-to-hand combat in the history of the United States Army,” said retired Army Brig. Gen. and Fredericksburg native Jack Apperson. “He was one of the earliest casualties in our fight for liberty.”

Jim Davis of Fredericksburg said although he never personally served in the military, he attended multiple Memorial Day city events on Monday.

“I’m here because it’s what Americans should do on Memorial Day, whether we served or not,” said Davis.

Despite COVID-19 and logistical woes, Tokyo 2020 to be the most inclusive Olympics

Despite COVID-19 and logistical woes, Tokyo 2020 to be the most inclusive Olympics

Paige Lee Morelock, who had no prior criminal record, will face the possibility of up to 40 years in prison when she is sentenced Nov. 5.

Local COVID-19 infections are going up again, just as they've done in the state and nation.

Seth Roderick of the Sons of the American Revolution places a wreath at the Hugh Mercer Statue downtown.

Retired teacher Mayo Carter honors those lost to war by handing out poppies along the canal path in Fredericksburg on Monday.

A young visitor touches some of the names of fallen Fredericksburg-area soldiers from World War I following the annual remembrance.