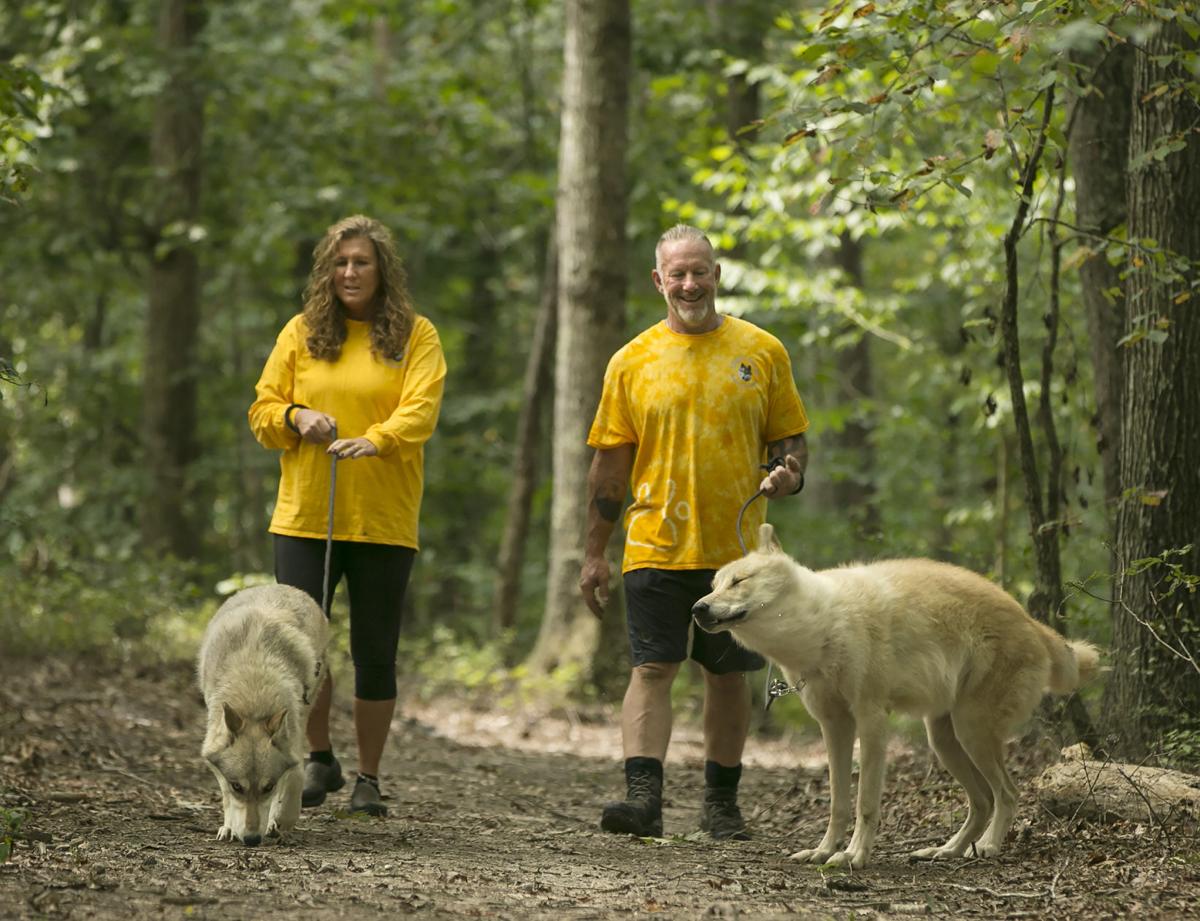 John and Cindy Grove walk their wolfdogs, Mariel and Floki, at their Stafford home. The couple owns eight wolfdogs at their property they call Lupine Grove. The Groves would like to educate prospective owners about the animals. 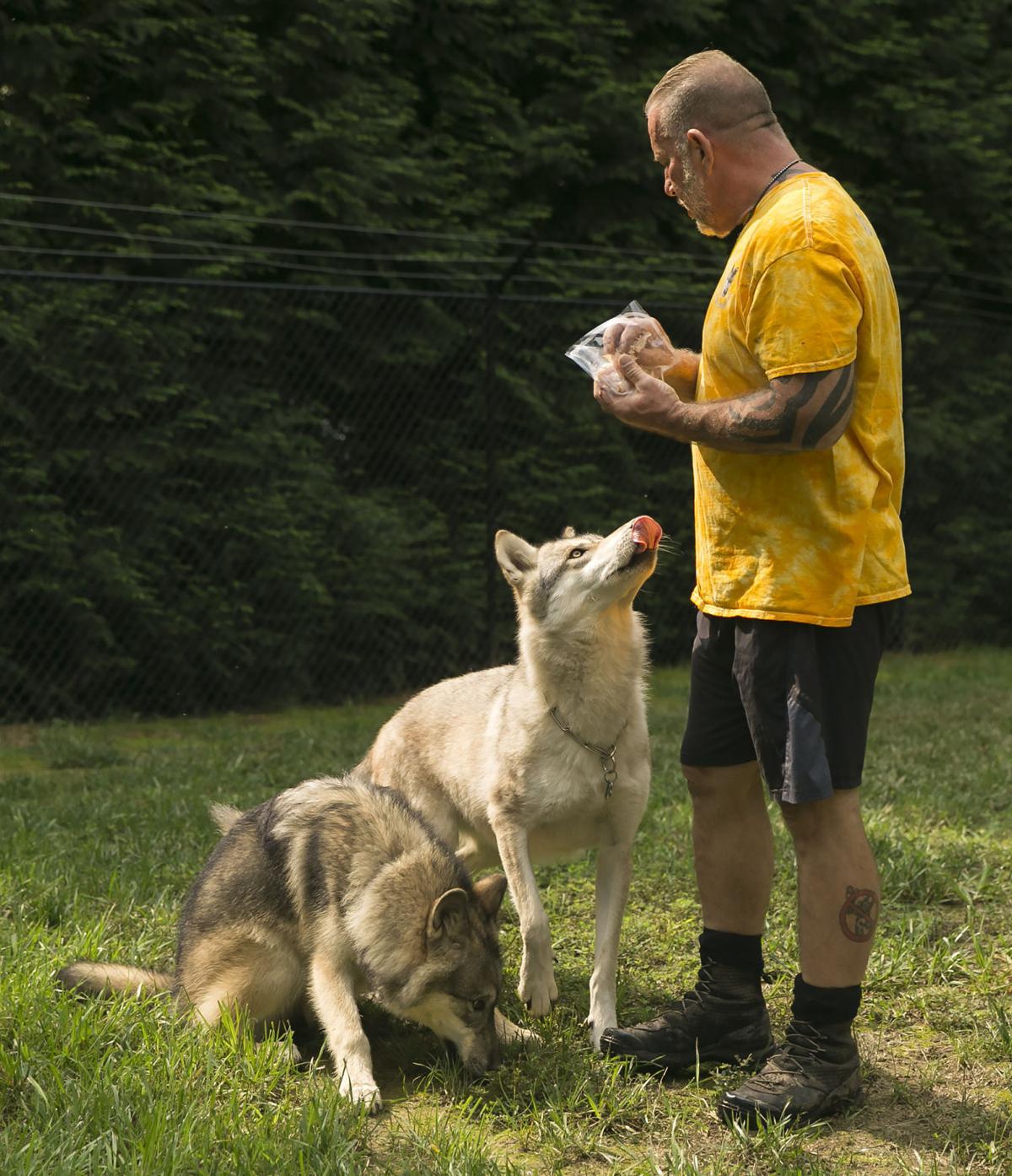 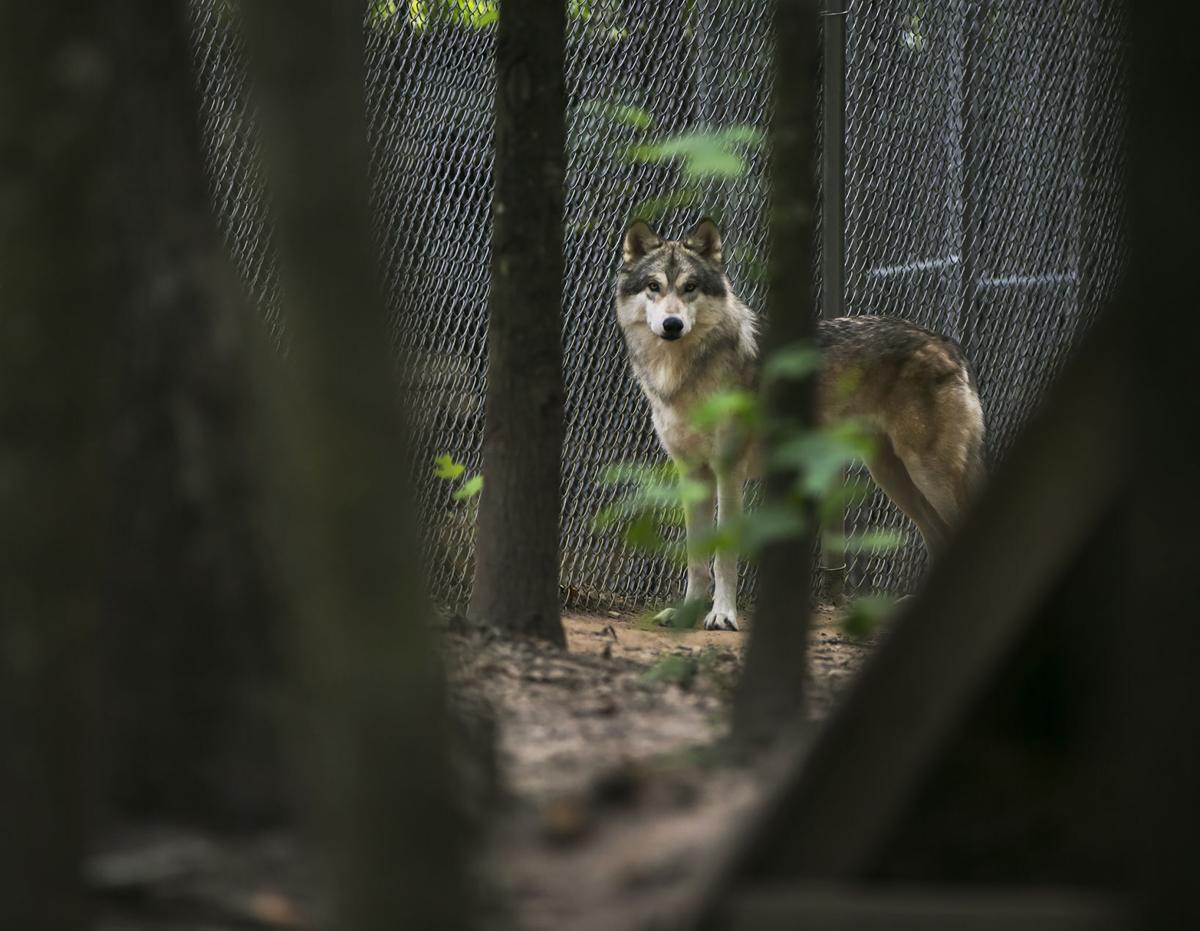 Jethro, one of eight wolfdogs owned by the Groves, checks on a group of visitors to his Stafford home. 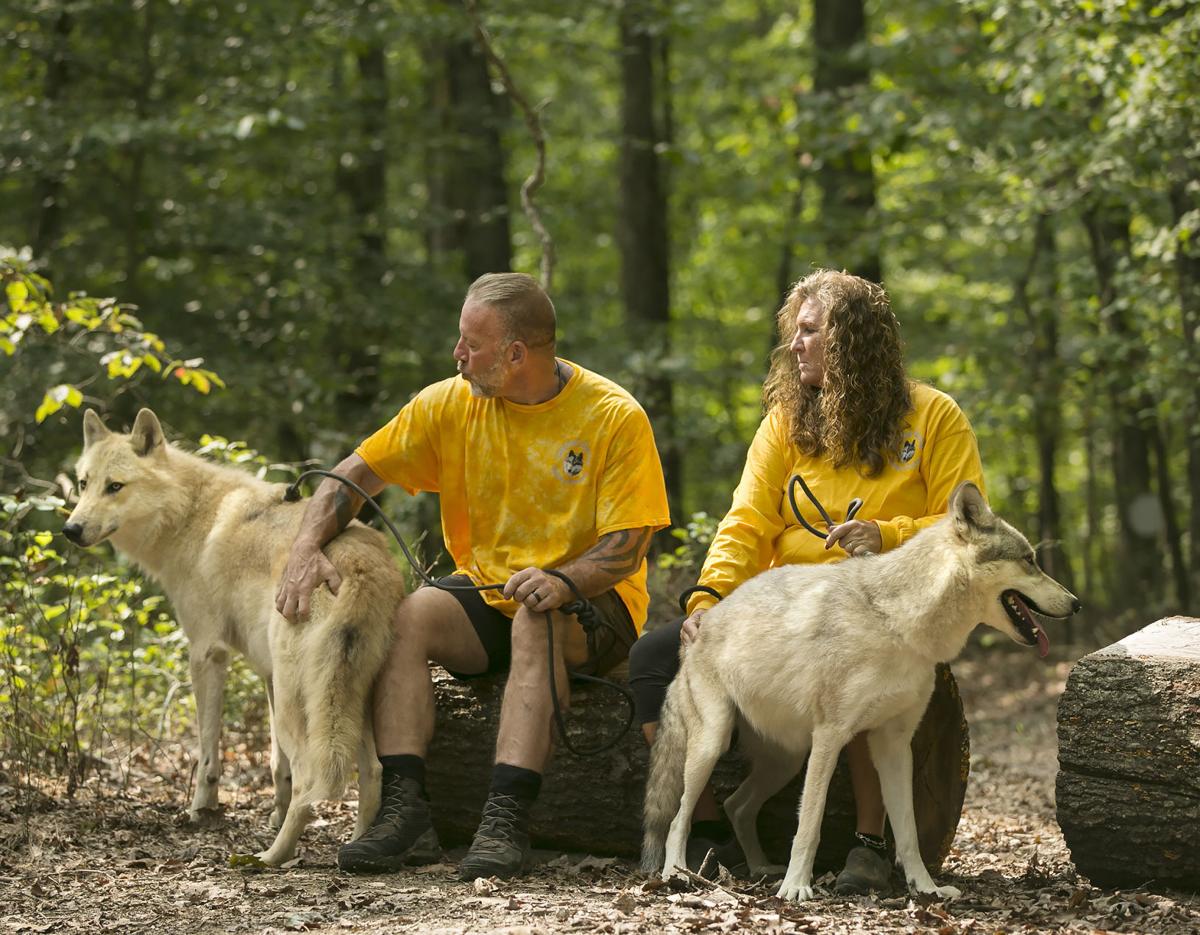 John and Cindy Grove take a break while hiking with their wolfdogs Mariel and Floki at their Stafford County home on Wednesday, Sept. 16. The couple owns eight wolfdogs at their property they dubbed Lupine Grove. The Groves would like to educate prospective owners about some of the lesser known traits of the animals and how that affects keeping one as a pet.

John and Cynthia Grove say wolfdogs do not deserve the same reputation as common wolves in the wild.

Wolfdogs, or Lupine Dogs, possess a natural, wolf-like appearance, but unlike the wolf, the animals adapt to domestic living environments with a strong bond to their human families, according to the World of Lupines Foundation.

Over the past several years, the Groves, who own eight wolfdogs, have spent time and money conducting their own research on the animals, visiting wolfdog preserves and attending gatherings with other like-minded wolfdog owners across the country.

The North Stafford couple recently applied for a special commercial kennel exception to operate as a business in the 20 block of Quarter Horse Court. Dubbed Lupine Grove, the 25-acre outdoor facility would allow the couple to demonstrate a typical day in the life of a wolfdog owner and what it takes to properly raise and care for the dogs.

John Grove said the wolfdog educational facility would help give prospective owners “the unvarnished truth” to help them make better decisions before buyer’s remorse sets in. Grove said wolfdogs can end up in bad situations because inexperienced, first-time owners aren’t equipped to handle them. From there, the animals are sent to shelters or rescues, where they are often ultimately euthanized.

“What it takes to keep these animals happy and safe … containment, enrichment, health checks, how we socialize with them, entertain them, walk and feed them,” said Grove. “Here, we’ll give you soup-to-nuts—all the good, all the bad, all the truth, and then you decide.”

On Aug. 25, the couple stood before Stafford County’s Board of Zoning Appeals, where nearly 20 people spoke publicly, both in favor of and in opposition to the Groves’ proposed wolfdog facility.

About 20 residents from nearby Lake Arrowhead submitted letters to the board opposing the commercial kennel, many labeling the animals as dangerous or a nuisance. Several others raised concerns about the additional traffic such a facility might bring to the rural neighborhood.

But Pam Talley, of Two Sisters Pet Sitting in Stafford, has firsthand experience with the animals. Talley told the board that she has been a pet sitter for the Groves’ wolfdogs for the last eight years and there has never been a problem.

Talley said many of the concerns voiced by neighbors in the public hearing could be squelched if they took the time to meet the dogs.

“They’re just dogs with wonderful personalities,” said Talley. “They know how to sit, they scooch on the ground, they like to get cookies just like any other dog. They don’t have bad habits, they walk on leashes. I’ve introduced my dog to them, and they’ve been just fine.”

Although it is legal to own hybrid canines in Stafford County, Grove said his wolfdogs are not in that category.

“They most closely match a mutt, with a mix of Husky, Malamute, German Shepherd and gray wolf,” said Grove.

Grove said his dogs have been vaccinated against rabies and are domestic animals, selectively bred over many generations to retain the look of a wolf, but with a more manageable personality.

“We haven’t had a pure-blooded wolf in these guys for 40 years, so these are not hybrids,” said Grove.

The Code of Virginia defines “any animal that is or can be demonstrated to be a hybrid of the domestic dog and any other species of the Canidae family” as a hybrid canine.

“Hybrids are breeding dogs with wolves, coyotes, dingoes ... you’re mixing something that isn’t a dog with a wild animal to get a hybrid,” said Grove. “Wolfdog breeders have been breeding wolfdogs with wolfdogs for generations.”

At the conclusion of the public hearing, the board voted 6–1 to deny the Groves’ request. County officials told the couple they can apply for a conditional use permit to proceed with their plan.

Grove must “clearly define his use and proposal to solely demonstrate and define what he plans to do with the public [on the property],” wrote Shannon Howell, Stafford community engagement manager, in an email.

Grove said he and his wife will not give up. They plan to explore the county’s by-right options to hopefully find a way to open their facility.

No matter what the outcome is, Uriah Kiser, who lives close to Lupine Grove on nearby Boundary Drive, believes the neighborhood is not the place for a such a venue, and said all he wants is a fair hearing to prevent future ownership of wolfdogs in the county.

“I don’t mind grandfathering whatever’s here, but I certainly don’t want to see any more of these dangerous wolves in Stafford County,” said Kiser.

Although the total number of wolfdogs in the county is unknown, Stafford County Animal Control Capt. Mike Null said his department hasn’t responded to a hybrid canine bite incident in nearly two decades.

Ashleigh Dabney, a non-licensed veterinary technician who rents a home outside of Lake Arrowhead, said she has no issues with the Groves’ vision.

“If you have the experience and the background knowledge—absolutely fine,” said Dabney. “My comfort level living within a quarter mile of them is: I’m pretty comfortable.”

The couple, who fell in love with the animals about 10 years ago, has no intention to breed or sell the animals. Their dream is to simply share their years of experience with the animals to teach would-be wolfdog owners what they need to know as they consider acquiring one. Grove believes what is being offered at Lupine Grove is “the standard” for raising the animals.

“We have the most complete résumé of anyone in the country when it comes to preparing for and executing ownership of these dogs,” said Grove. “If this is not for you, then I’m glad we’re able to show you, because that’s one less dog in a rescue situation. That’s our whole intent.”

John and Cindy Grove walk their wolfdogs, Mariel and Floki, at their Stafford home. The couple owns eight wolfdogs at their property they call Lupine Grove. The Groves would like to educate prospective owners about the animals.

Jethro, one of eight wolfdogs owned by the Groves, checks on a group of visitors to his Stafford home.

John and Cindy Grove take a break while hiking with their wolfdogs Mariel and Floki at their Stafford County home on Wednesday, Sept. 16. The couple owns eight wolfdogs at their property they dubbed Lupine Grove. The Groves would like to educate prospective owners about some of the lesser known traits of the animals and how that affects keeping one as a pet.