WATCH NOW: Partnerships put more fresh produce on tables of those who need it
0 comments
Share this
Only $5 for 5 months
1 of 3 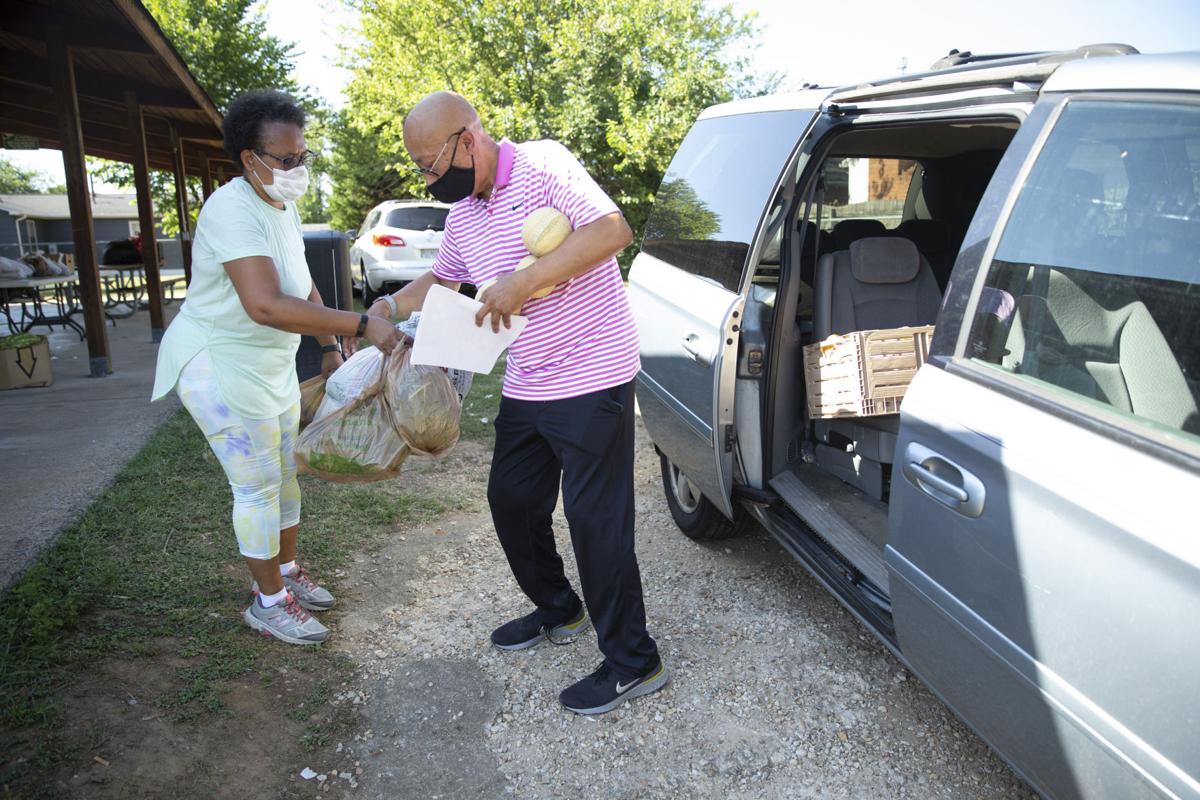 Volunteers Macy Shaw (left) and Xavier Richardson load produce and rotisserie chickens into a van to take to seniors on Tuesday. 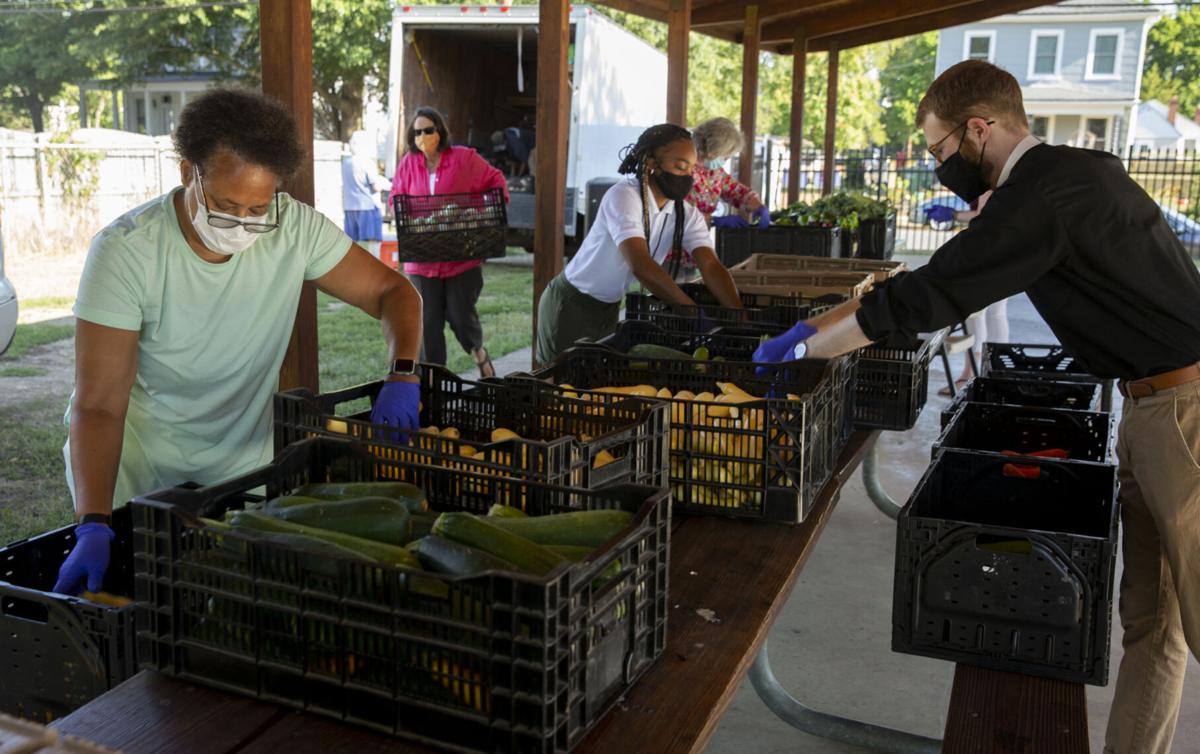 Volunteers sort and pack fresh vegetables to deliver to seniors in Fredericksburg’s Mayfield neighborhood this week. 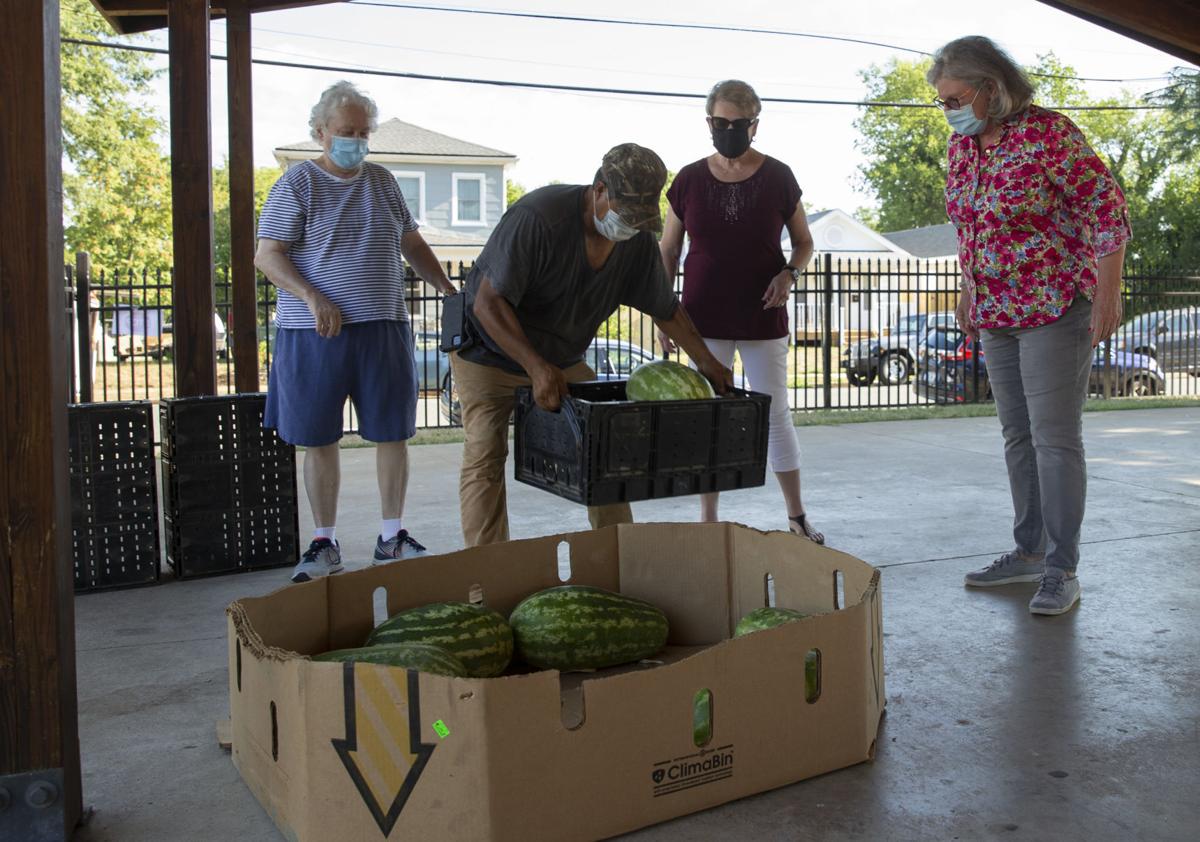 Luis Gutierrez from Little Green Farm in Thornburg delivers watermelons and other fresh produce to be distributed to Mayfield residents.

Trudy Smith sat at a bench under a pavilion in Mayfield and gave instructions on how the fresh produce in front of her should be bagged and separated.

Crates of carrots and potatoes, tomatoes and peppers, white cucumbers and yellow zucchini—yes, those are the correct colors—had been brought to the Fredericksburg neighborhood by Spotsylvania County farmer Luis Gutierrez. He had picked many of the items from his Thornburg farm that morning, then delivered about 20 crates of vegetables to members of the Mayfield Civic Association through a partnership involving several local groups.

Led by Smith, the volunteers divided up the bounty into bags for about 70 of Mayfield’s most senior residents. Smith and her team had decided the older folks needed the fresh produce the most—because they faced the highest risk while being out and about, both from the heat and coronavirus.

Even though many of the volunteers were also in that age group—Smith is 75—they busily organized the produce, along with rotisserie chickens donated by Healthy Generations Area Agency on Aging.

“We’re serving people 90 years old, and if we don’t, they won’t get it,” Smith said as she directed other volunteers to post signs saying everyone on the grounds had to maintain their distance and wear masks. “We’re trying to keep it safe. If not, what’s the point?”

The Tuesday-morning scene at Mayfield plays out once a week at 10 sites across the Fredericksburg region. When the global pandemic shut down many local food pantries because of safety concerns, lack of volunteers, a drop in funding or all of the above, agencies looked for other ways to get fresh produce into the hands of people who needed it the most but couldn’t venture out to local farmers markets.

Virginia Community Food Connections, led by Elizabeth Borst, worked with organizers of The Table at St. George’s Episcopal Church. In 2012, volunteers with The Table opened their basement to a market-style pantry that allowed participants—called shoppers—to browse the selections and pick out their choices.

Three years ago, the church started taking its offerings into the community through a program called Table in the World. While the original Table at St. George’s has been closed since March, the Table in the World has mushroomed in the wake of virus closures, said Chris Cook.

She’s the “C” in “LLC,” a trio of St. George’s volunteers, including Linda Carter and Linda Miller, who’ve made The Table a success.

Table in the World illustrates that it takes a team of community partners to solve the problems of hunger, Borst said. The Table raises money from corporate and individual donations for its operations and pays the farmer “for his hard work,” Borst said. She finds farmers willing to participate.

Another partner, The Salvation Army, serves up fresh produce at its food pantry, which is open on Tuesdays and Thursdays. Some of the food from Gutierrez is delivered to other agencies, such as Empowerhouse, which helps victims of domestic violence, making the creates of fresh food stretch even farther.

All together, the “initiative has been ramped up to provide 84 crates of fresh vegetables to about 2,000 people each week,” Borst said.

The Fredericksburg region may seem like a wealthy area, she said, but residents struggle with putting food on the table, and the loss of income from the pandemic has only made matters worse.

One of every four to five children in the area served by the Fredericksburg Regional Food Bank is facing issues of food insecurity, according to Feeding America. Rates are highest in Fredericksburg and Orange County, where as many as 18 percent of adults and 24 percent of children don’t have a reliable access to affordable and nutritious food.

The local food bank has distributed 876,983 pounds of food during the COVID-19 crisis, said Elizabeth Gilkey, grants and communications manger for the facility. That’s the equivalent of 701,586 meals.

During the food bank’s twice-weekly distributions, which have stopped, and at pop-up distributions throughout the community, the food bank served 29,517 people, Gilkey said. Some may have attended numerous events and been counted more than once, she said.

As for the Mayfield distribution, Doug Richardson said people are excited to see bags of fresh greens, along with corn, cantaloupes and other items.

“They love it, and the need is great, especially for the elderly folks” who either can’t drive or don’t want to be out shopping because of the pandemic, he said.

He’s a deacon as well as one of the delivery drivers and couldn’t help spending time with those he visited, even though he had several stops to make.

“You have to bless them with this,” he said, holding up his tattered Bible.

There was a lot of blessing—and thanking—going on throughout the morning. Mayfield volunteers repeatedly thanked Gutierrez for dropping off the food in their community, and he returned the sentiment. He said the virus has impacted markets where he used to sell produce.

“It’s a good thing,” he said about partnership. “I help them, and they help me, and it’s the best we can do.”

Other initiatives encourage people getting assistance to spend their benefits on fresh produce.

The SNAP match, for those who receive what used to be called food stamps, has increased from $30 to $50 at local farmers markets. For every dollar customers with SNAP EBT or Pandemic-EBT spend at markets, they get a dollar in free fruits and vegetables, up to $50 worth.

“Program usage numbers are very high as more people use the market match to double the amount of produce they take home,” said Elizabeth Borst, director of Virginia Community Food Connections. “But we always need to let people know about the program, especially those newly enrolled.”

Also, those who receive assistance from WIC, or Women with Infant Children, can get a $10 coupon for produce at farmers markets.

The benefits are available at farmers markets in Fredericksburg and the counties of Caroline, King George and Spotsylvania.

Volunteers Macy Shaw (left) and Xavier Richardson load produce and rotisserie chickens into a van to take to seniors on Tuesday.

Volunteers sort and pack fresh vegetables to deliver to seniors in Fredericksburg’s Mayfield neighborhood this week.

Luis Gutierrez from Little Green Farm in Thornburg delivers watermelons and other fresh produce to be distributed to Mayfield residents.