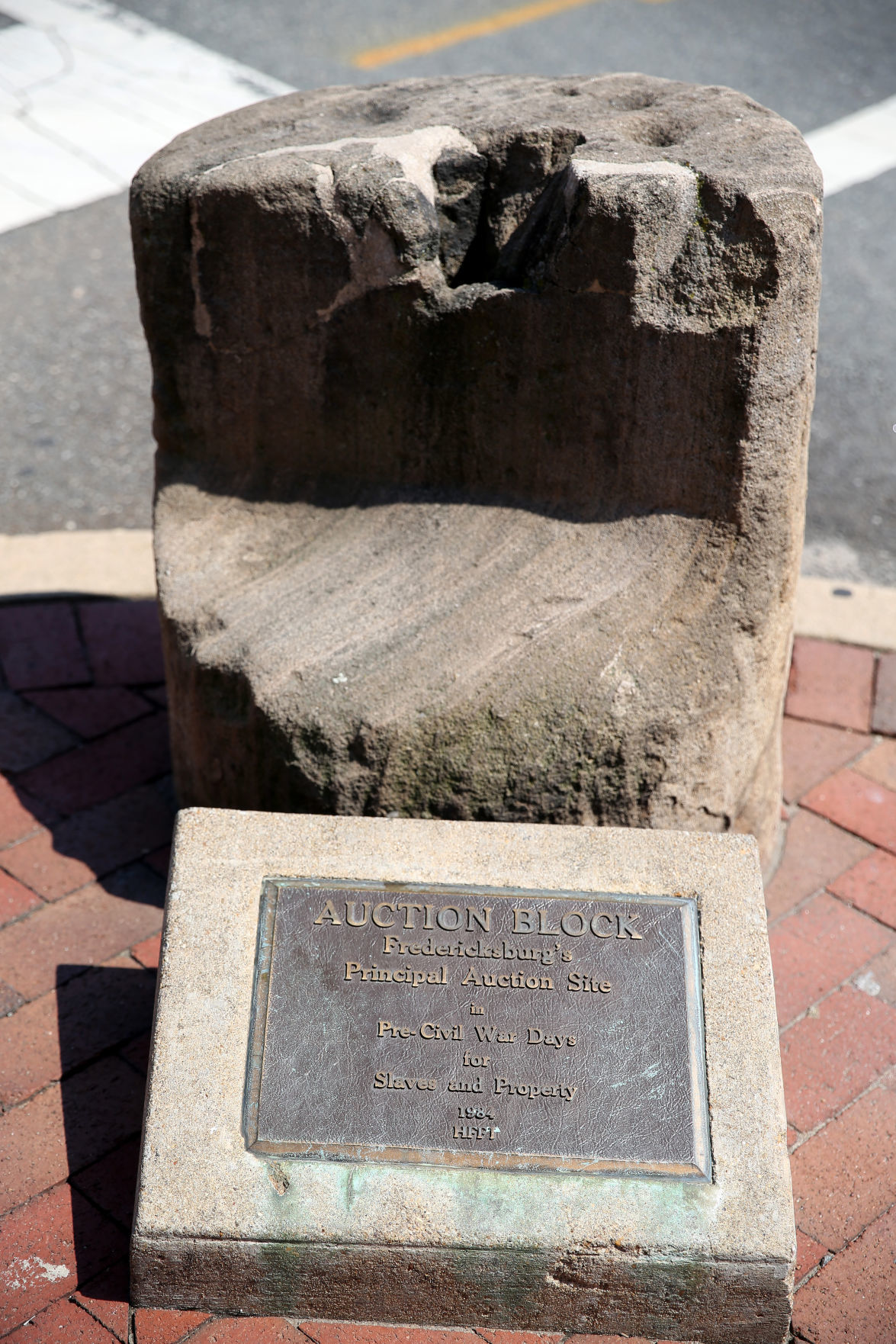 Hanna says the slave auction block is a missed opportunity to educate people about the history of slavery in the Fredericksburg area. 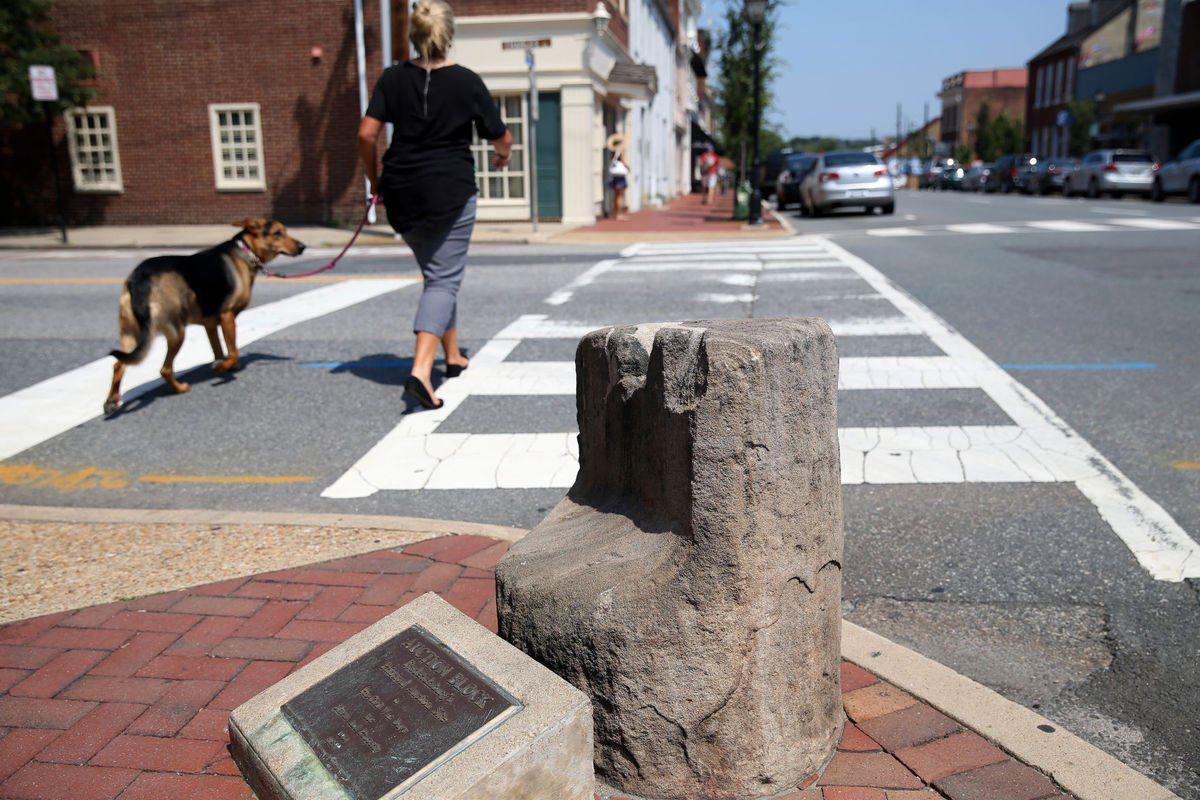 The slave auction block on the corner of Charles and William streets has a history of controversy.

What can the tourist or local learn about the history of slavery in Fredericksburg just from wandering around town?

UMW geography professor Steve Hanna says the answer is some, but not enough.

In 2013, he and his student assistants mapped all of the city’s historical markers and monuments to determine what stories they told—or did not tell—about the history of Fredericksburg’s enslaved population. This year, they updated that map to see if anything had changed.

“I was pleased to see that more attention, although still not a lot of attention, has been given to talking about it in these markers,” Hanna said.

Hanna will share this latest research on the radio program, “With Good Reason,” which airs at 2 p.m. Sunday on Radio IQ, 88.3 FM.

He and the show’s host, Sarah McConnell, take a walking tour of the city, examining markers and monuments both new and old.

“My focus is really just on what is physically on the landscape, that if you’re just wandering around, will you actually see something about these stories?” Hanna said.

Prominent among these physical markers is the slave auction block at the corner of Charles and William streets, which reemerged as a controversial site after the events of last summer in Charlottesville, where white supremacists gathered to protest that city’s decision to remove a statue of Confederate General Robert E. Lee.

Hanna said he thinks Fredericksburg has missed an opportunity to properly interpret the auction block. The City Council voted in August to leave the block in place, though Mayor Mary Katherine Greenlaw said the council would hear input into how it could be more appropriately interpreted.

Hanna’s tour also takes listeners to the corner of Princess Anne and William streets, where a sculpture by Ayokunle Odeleye—a native of Fredericksburg who attended the old Walker–Grant High School before integration and graduated from James Monroe High School—was erected in 2013 to commemorate the 150th anniversary of the Emancipation Proclamation.

Hanna said that here as well, there is a missing opportunity to tell more about slavery and the local experience of emancipation.

“All the inscription says is something about the proclamation and it lists the artist’s name, which is important,” he said. “But there’s nothing there that helps the visitor understand why they chose to erect monument there—it has to do with fact that [St. George’s Episcopal Church] had a whole service to repent for the Episcopal church’s role in maintaining and supporting slavery.”

Hanna said that when he and McConnell visited the Fredericksburg battlefield site at Lafayette Boulevard, they were struck by the language on a plaque erected by the Daughters of the Confederacy and on the Kirkland monument—both of which mention brave men on “both sides” of the conflict.

They felt this mirrored Donald Trump’s comments after Charlottesville in which he said “both sides” were to blame for the violent demonstrations and the death of Heather Heyer, Hanna said.

He said the story that draws a moral equivalent between Confederate and Union soldiers is still “very strong in the landscape.”

He said that story avoids the truth of the war by ignoring slavery as a cause of the war, as well as ignoring emancipation, the emergence of Jim Crow laws and segregation throughout the south.

Hanna said the beginning of a story about slavery in Fredericksburg can be seen in some of the newer markers. He pointed to an interpretive marker near the Emancipation Proclamation statue that was erected in 2016 when the steps that led to the former National Bank building were moved to the garden area in front of the Fredericksburg Area Museum.

The steps were renamed “the Lincoln steps” because it is known that Lincoln stood there when he visited Fredericksburg in May of 1862. The steps also would have been used by John Washington, an enslaved man who lived in the National Bank building and escaped to freedom earlier in 1862. He later wrote a memoir about his years in Fredericksburg.

Hanna said the fact that the marker tells part of Washington’s story is meaningful.

“That addition is something I wanted to draw attention to, because it’s important that the city decided to add that story [about emancipation] from a local perspective,” he said. “There is the beginning of a story being told there and a little bit more of slavery as a cause of the Civil War down on the corner of Caroline and William streets.”

Hanna said he hopes the research he and his students have done raises awareness about the ways commemorative landscapes can both highlight and hide parts of history.

“[These landscapes] have helped us forget about the continuing legacy of slavery in modern life that we still are saddled with,” he said.

“I hope that [this research] spurs a productive debate that ends with something that improves our understanding of what that legacy means to Fredericksburg’s history and why it matters today.”

Hanna says the slave auction block is a missed opportunity to educate people about the history of slavery in the Fredericksburg area.

The slave auction block on the corner of Charles and William streets has a history of controversy.