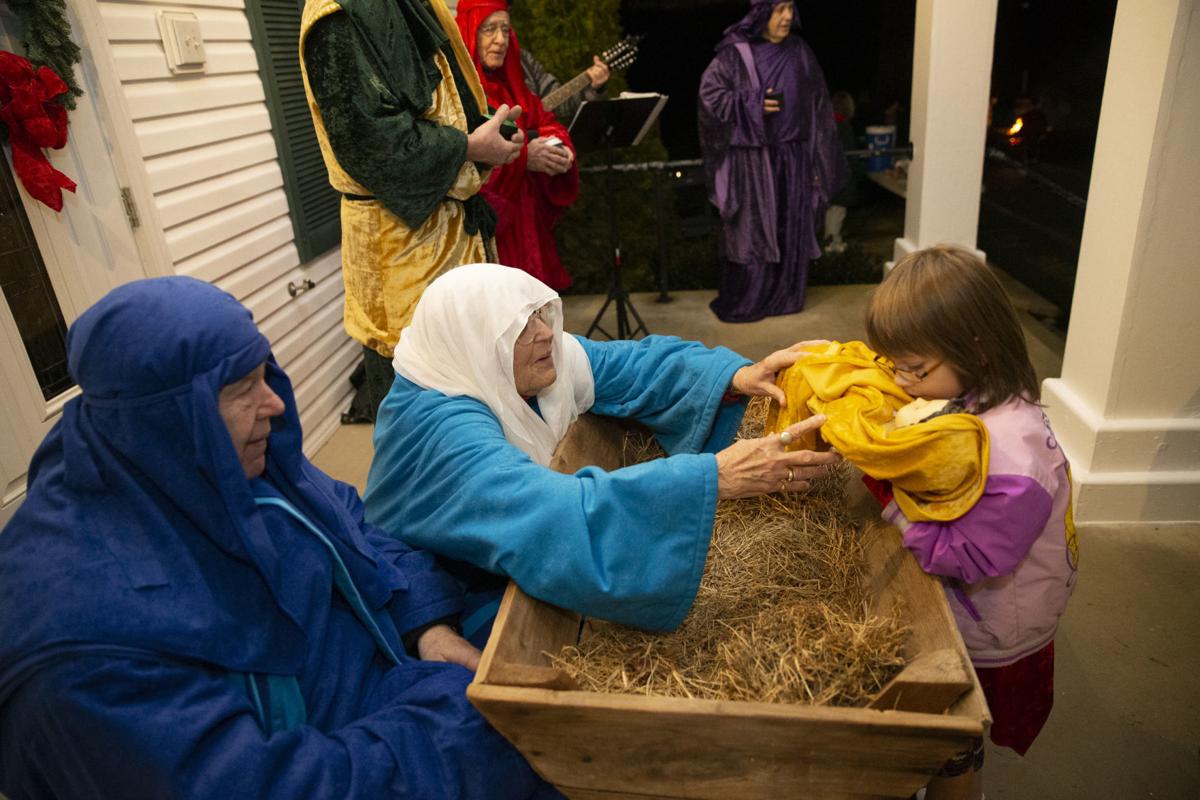 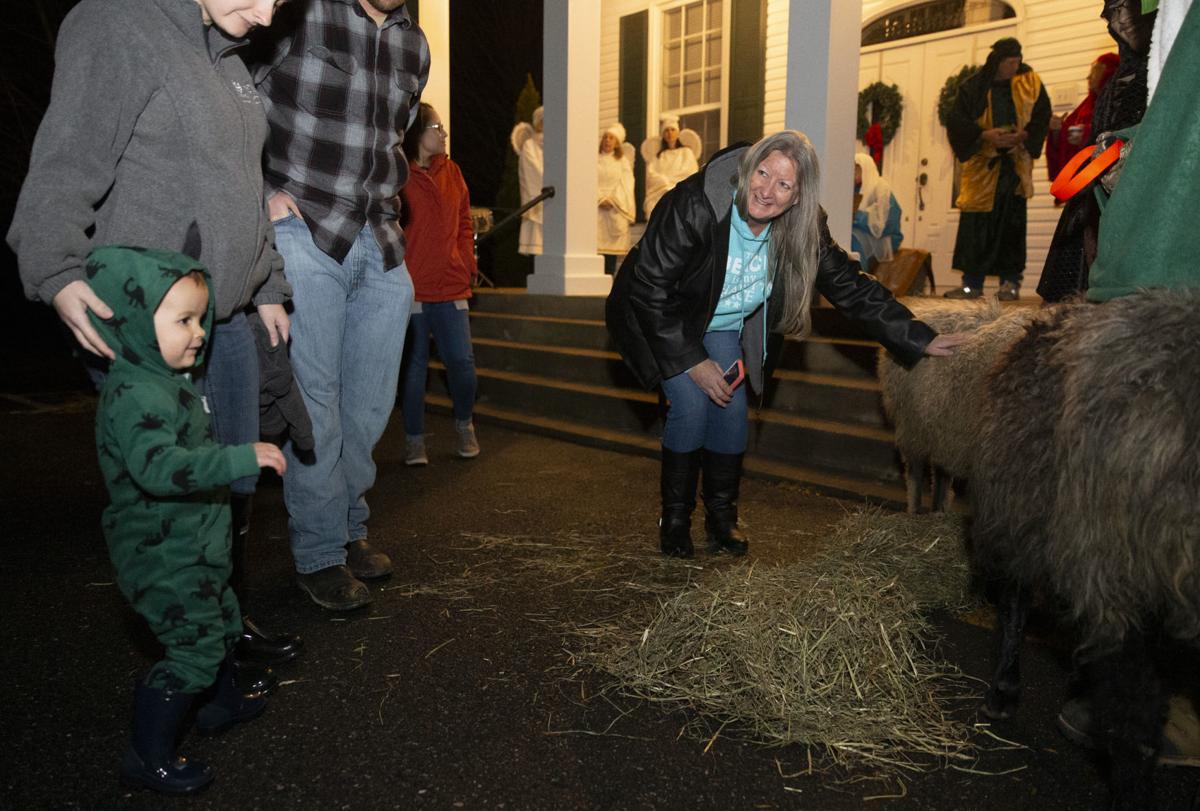 Penny Todd coaxes her grandson, Easton Todd, to pet a sheep at the living Nativity at Wilderness Baptist Church in Spotsylvania. The church has put on the annual event for over 35 years, only missing nights due to bad weather. 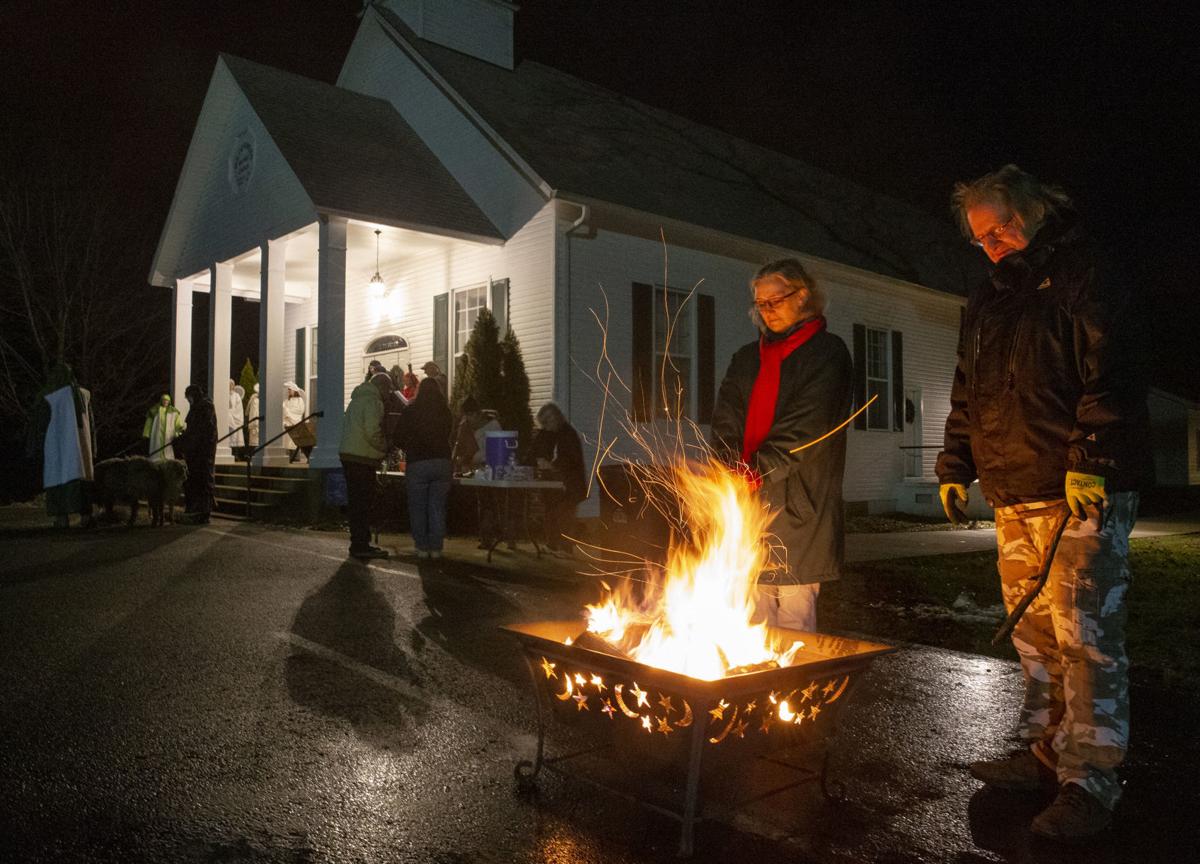 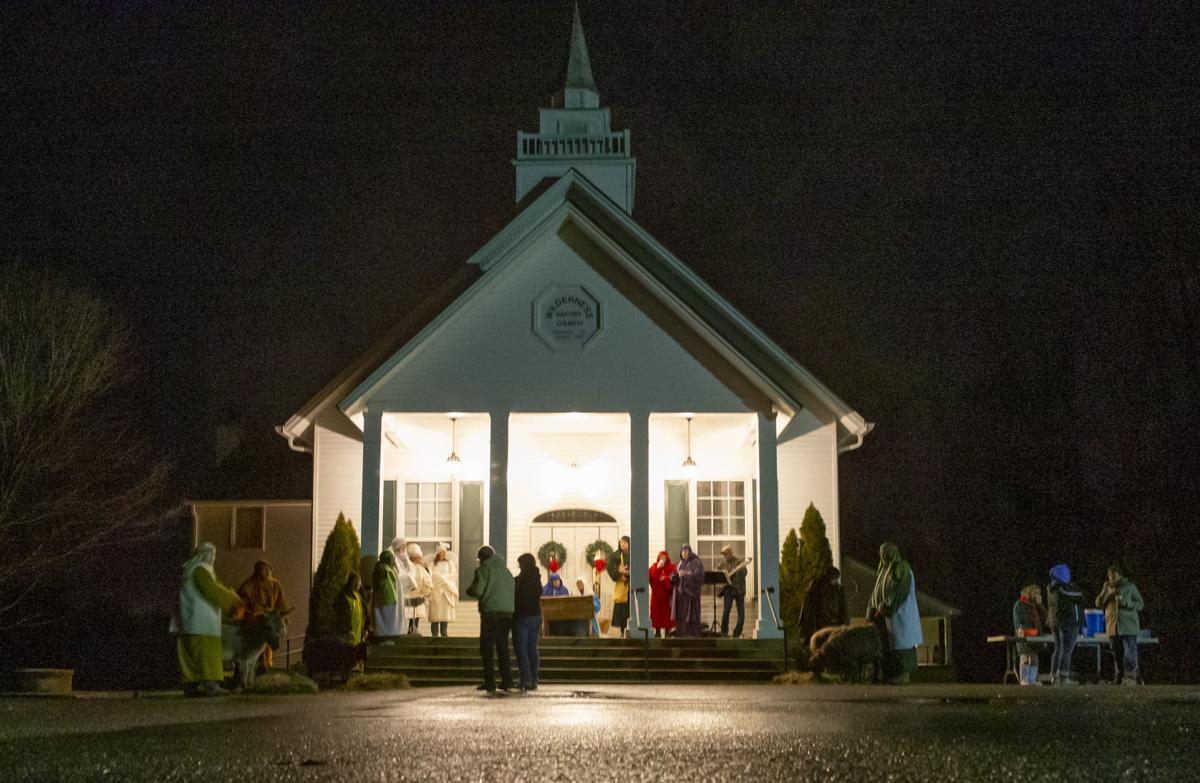 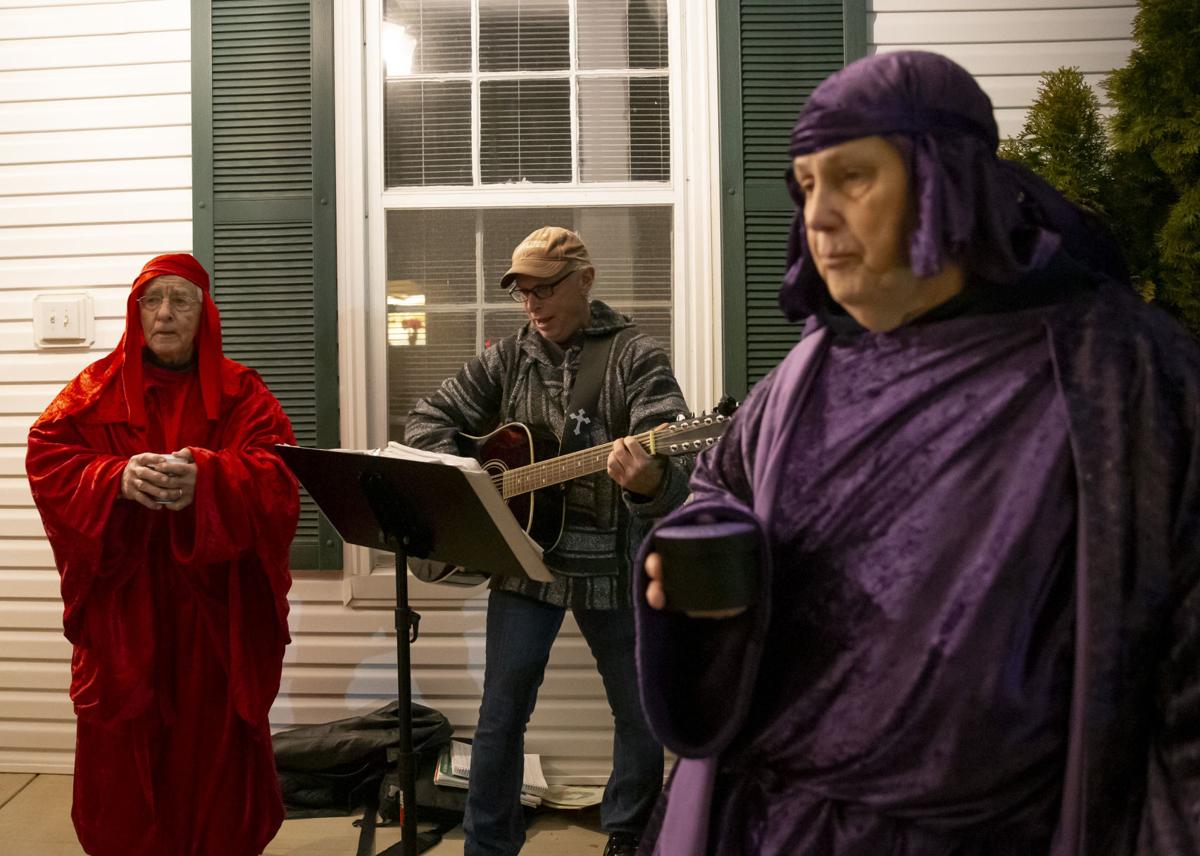 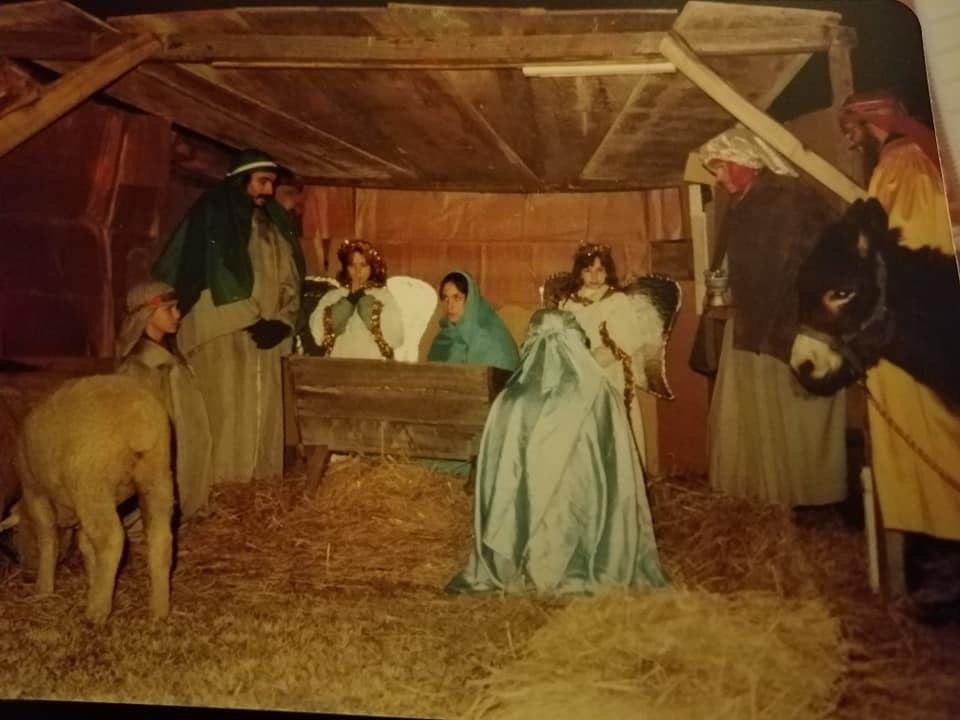 A photo from the first year Wilderness Baptist did its living Nativity, believed to be 1982.

Sunday night, when most folks were inside nice and warm, Bill Ward was out in the cold holding a sheep by a leash near the steps of Wilderness Baptist Church.

“I’m playing a shepherd,” said Ward, noting that he’d been playing a role in the Spotsylvania County church’s “Living Nativity” performance for the past 16 years.

When his sheep gave the leash a little tug, Ward nudged him back into place. Nearby, a whole living host of costumed shepherds, wise men, angels and Mary and Joseph portrayed the scene at the birth of the baby Jesus. The sheep wasn't the lone animal, either—it had a donkey and a goat to keep it company.

“It wouldn’t feel like the holidays to me without being part of this,” said Ward. “This Nativity display we do reminds us all of the reason for the season.”

The dozens of characters and church members handling everything from parking to distribution of cookies and hot chocolate were glad to be there Sunday night. Performances planned for Friday and Saturday evenings had been cancelled because of heavy rain.

As it was, the display—which is usually staged by the highway—had been moved to the church’s front steps because of mud problems.

“But we’re excited to be able to get in one night,” said Debbie Aylor, a church member who lives next to Wilderness Baptist and remembers seeing the lights of the Nativity display as a child. “It’s a nice reason to come out and talk with other church members.”

Members of the church believe that their living Nativity display is likely the oldest of its type in the Fredericksburg area, though that’s a tough thing to verify.

Edna and Jimmy Rose, Tommy and Carolyn Dillard and the Rev. Amos Healy—the current pastor of Wildnerness Baptist—were nice enough to get together for a deep dive into the history of the annual fixture and how it got started.

They believe that it started at the church in 1982, the brainchild of Brad Mobley, who was pastor at the time.

There weren’t as many characters portrayed initially, or as many animals in and around the manger.

“Back then, we didn’t have the costumes we have today. We had bathrobes or choir robes,” said Edna Rose.

Tommy Dillard said that wasn't enough to keep you warm while posing as a shepherd or wise man on a cold winter night.

“I’d wear my coveralls underneath,” he said.

Rev. Healy said that having the live animals as part of the display has always been a big draw for children, whose parents bring them to see and pet the animals. He noted that there haven’t been any major issues wrangling, stabling or controlling the animals over the years.

But other church members brought up the year of “llama trauma” that sent Healy to the emergency room. The minister recalled the llama that caused a tiny bit of trauma was one of several the church had been loaned over the years. Some years, they would add humps to make them more closely resemble camels.

“They loaded differently than any animal I had worked with,” said Healy. He said the llamas preferred to jump off a trailer rather than simply stepping off.

“This one llama was getting ready to launch and I thought I’d come around and catch its halter, but I ended up stepping right in front of it as it leaped,” he said, knocking him flat.

Healy said he was dazed for a moment, but when he came to his senses, “I had a funeral director on one side and an angel on the other. The angel was my daughter, and she told the funeral director to get away from me because I wasn’t near ready to go.”

The group of Nativity veterans said that they haven’t cancelled the annual display, which runs for three nights, very often. Only heavy snow or a mix of bitter cold and rain have kept them from celebrating the birth of Jesus in their hands-on way.

They noted that it helps that a church member, Bonnie Borchgrevink, has made a host of costumes over the years for all the different characters. And they are made from heavy fleece.

“You don’t get cold when you wear those,” said Carolyn Dillard, who said she played a host of roles over the years.

In some years, the people portraying the arrival of the baby Jesus were instructed to stay still and in character, especially when cars pull in and people walk over to see them and the animals.

Edna Rose said that one year, the actors must have really stuck to the “stand perfectly still” instruction, judging by a comment one visitor gave her.

“He asked me if someone had stolen our props because he drove by in the daytime and didn’t them out there,” she said. “No, I told him, we just went home.”

Healy said that while many who drive by the display each year on State Route 3 don’t stop, “It tells them what Christmas is really about.”

He said it's a good thing to focus on at this time of year, when it’s easy to get sidetracked by all the present-buying and rushing about.

Though Widemur said that when the trio joke with each other, “We act more like wise guys.”

Penny Todd coaxes her grandson, Easton Todd, to pet a sheep at the living Nativity at Wilderness Baptist Church in Spotsylvania. The church has put on the annual event for over 35 years, only missing nights due to bad weather.

A photo from the first year Wilderness Baptist did its living Nativity, believed to be 1982.