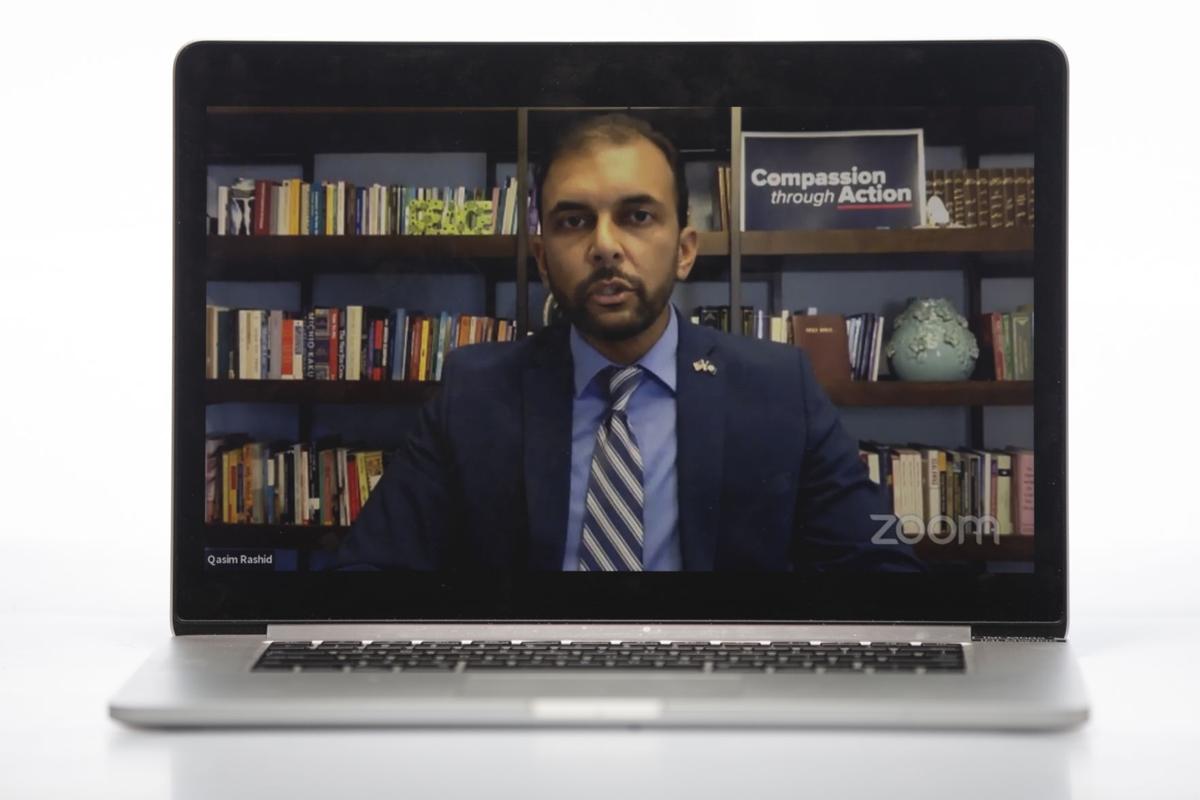 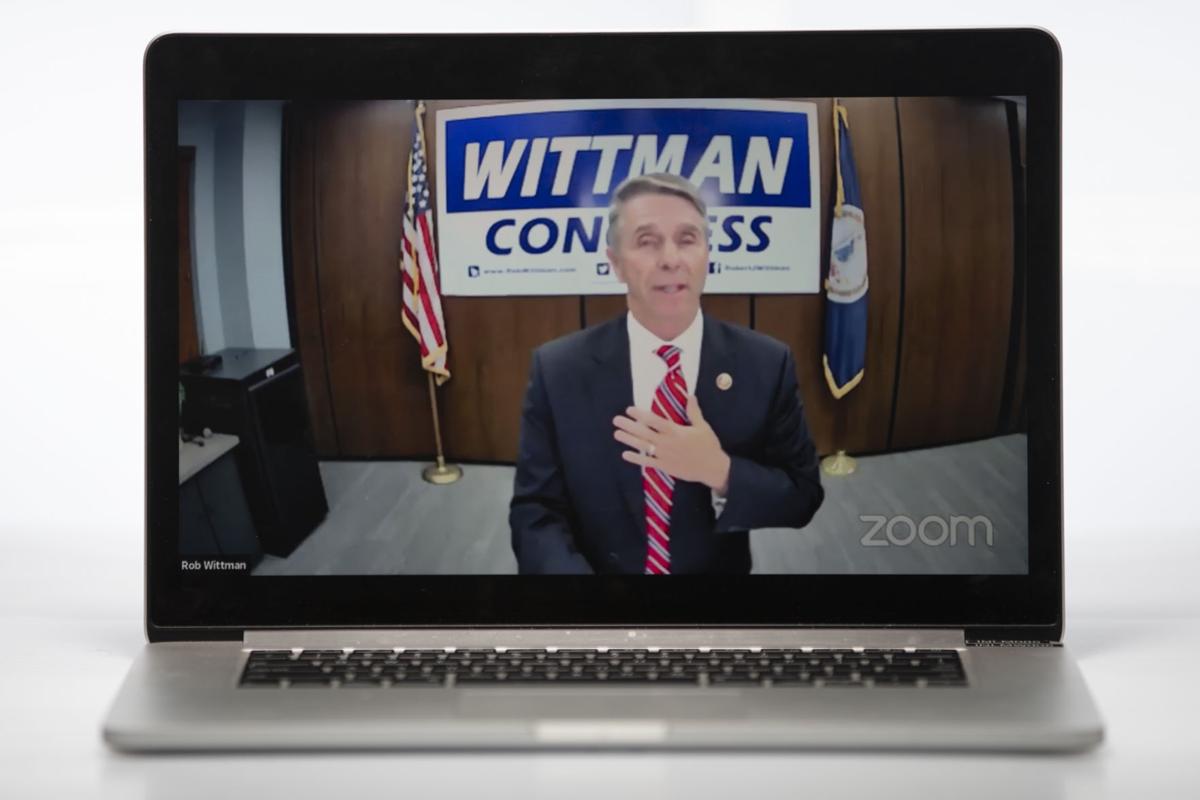 Congressman Rob Wittman participates in a virtual debate with Democratic challenger Qasim Rashid hosted by the University of Mary Washington in Fredericksburg, Va. on Monday, Sept. 21, 2020.

At its peak, about 500 viewers watched the debate in which the two candidates addressed a number of key issues, including the COVID-19 pandemic and its impact on healthcare. They also discussed the economy, schools, climate change, rural broadband, social security, law enforcement funding and immigration.

For those struggling in small business as a result of the coronavirus pandemic, Wittman said he is focused on preparing potential employees for future demands of the labor market by continuing to promote career technical training along with science, technology, engineering, and mathematics programs.

“We can better prepare our professionals for tomorrow by increasing access to dual enrollment [technical training] today so students can work towards credentials while still in high school,” said Wittman.

Rashid said he supports of The Heroes Act, a $3 trillion economic stimulus package which includes economic assistance to governments at the state, local, tribal, and territorial levels. Rashid said Wittman did not support the act.

“You’re in a position of power, you can have the opportunity to pass this legislation ... when there is a desperate need for working families, is simply beyond the pale of public service,” said Rashid.

Wittman argued the Heroes Act was drafted behind closed doors by Speaker of the House Nancy Pelosi, calling the act a “partisan wish list.”

When asked about job losses caused by the coronavirus pandemic, each candidate was asked what they would tell constituents who can no longer afford to provide employee healthcare benefits.

“Every American has the right to access affordable and comprehensive health coverage, for themselves and their families,” said Wittman. “Let’s face it, Obamacare has failed to deliver on its promises. We need solutions that prioritize the interests of the patients and not the government.”

Wittman said the pandemic underscores the importance of not only focusing on preventive care, but also the need to “fix our broken healthcare system.”

Rashid said when Republicans had control of the House, Senate and the White House, they failed to deliver on healthcare.

“What is needed is comprehensive healthcare coverage that people can use,” said Rashid.

On the environment, Wittman, a scientist by profession, said Rashid is pushing a “far left, socialist agenda with The Green New Deal,” introduced by Rep. Alexandria Ocasio-Cortez of New York and Sen. Edward J. Markey of Massachusetts.

“I’m focused on creating jobs and providing cost-effective energy that benefits all Americans,” said Wittman. “Those things don’t have to be achieved at the expense of jobs, prosperity and national security.”

But Rashid said The Green New Deal not only provides context on how the country must act to protect the environment, it also includes a broader economic plan.

“There is no Green New Deal without guaranteeing millions of high-paying new jobs,” said Rashid.

To address the lack of broadband connectivity in the district, Rashid, wants to make broadband a public utility, citing Chattanooga, Tenn., as an example of a rural location that successfully implemented broadband for all of its residents.

“Now they have 10 gigabyte speeds, up and down, for all of their citizens, as a public utility,” said Rashid. “It’s affordable, it’s accessible, and it’s saving lives, because its allowing telehealth to be a reality, it’s helping children during this pandemic, it’s helping small businesses.”

Wittman, who serves as co-chair of the House Rural Broadband Caucus in Washington, contends he has been working on broadband for years and said it’s vital for Congress to do more to close the digital divide for rural Americans.

“I think public-private partnerships ... not a public utility, are the way forward,” said Wittman.

On social security, Rashid said the benefit must be protected by strengthening the 85-year-old program and making sure senior citizens know it will be accessible to them when they are ready to retire.

“We need action ... seniors need to know they have security,” said Rashid.

Wittman also said the nation must honor its commitment to current social security and Medicare beneficiaries and those who are nearing eligibility.

With law enforcement reform on the front burner this campaign season, Rashid said he supports body armor and other protective gear for law enforcement officers, but does not support the 1033 program, a Department of Defense initiative that provides law enforcement agencies with military surplus equipment for little or no cost.

“The 1033 program, which militarizes local law enforcement, actually makes law enforcement less safe,” said Rashid, who prefers providing additional resources for those who are suffering from mental illness, addiction or homelessness. “That doesn’t require defunding the police ... that requires that our tax dollars are better allocated to truly serve the needs of constituents,” said Rashid.

Wittman said the focus on law enforcement should be on increasing transparency and accountability regarding the performance of law enforcement officials and he said the 1033 program does indeed help agencies protect officers who do not have the resources.

“Defunding the police is reckless and dangerous,” said Wittman. “It has to be a non-starter for anyone who understands the way our communities operate.”

The event was the second debate for the two candidates. Both met in person Aug. 20 at a criminal justice forum hosted by the Rappahannock Regional Criminal Justice Academy in Spotsylvania County.

The 1st District, which includes much of the Fredericksburg area and stretches through the Northern Neck to the Hampton Roads area, has been represented by Wittman since 2008.

Congressman Rob Wittman participates in a virtual debate with Democratic challenger Qasim Rashid hosted by the University of Mary Washington in Fredericksburg, Va. on Monday, Sept. 21, 2020.