Lisa MarkowiczBenoit is shown with husband David and godson Jarred Snowden at a wedding in Ireland.

Lisa MarkowiczBenoit, right, was the maid of honor at the wedding of her friend, Suzanne Maynard, 36 years ago. Both were 23. 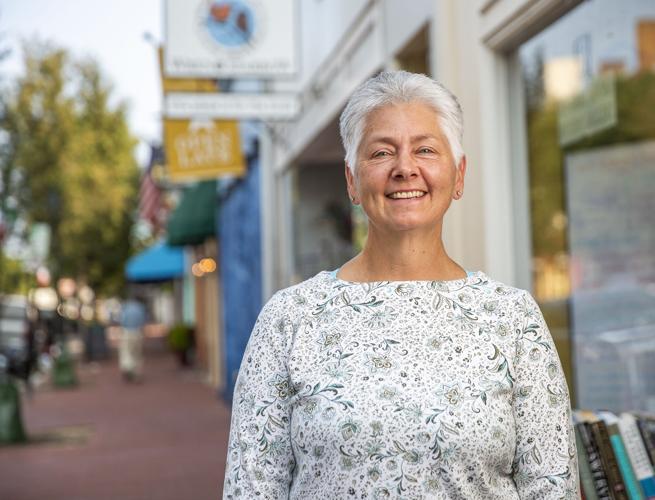 Lisa MarkowiczBenoit smiles outside her store, Wren & Sparrow, in Fredericksburg on Friday, Sept. 16, 2022.

Too bad “voodoo” has six letters and is too long for the Wordle puzzle because it might be the perfect solution for a recent play between two longtime friends.

Lisa MarkowiczBenoit of Spotsylvania County and Suzanne Maynard of Randolph, Vermont, have been close for 50 of their 59 years, ever since they were seated together alphabetically in elementary school. Over half a century, they’ve shared a connection that often involves one reaching for the phone to call or text the other—only to have the other beat her to it.

The two also have a friendly competition each morning to see who can solve Wordle in the fewest guesses. Maynard’s son, Jarred Snowden, an ICU nurse in Seattle, also plays, and as soon as all three make their picks, each texts the day’s Wordle screen to the others. It shows the first five-letter word each used and the subsequent guesses.

Last week, the longtime friends posted the same four words in the exact order, both solving the puzzle in four out of six tries. Both started with the word “trace,” saw that “t” and “e” were in the right position, then entered “twine,” then “those,” then the correct answer of “theme.”

“Isn’t that crazy?” asked MarkowiczBenoit, co-owner of the Wren & Sparrow bird supply shop in downtown Fredericksburg. “To start with the same word and progress through the puzzle to the fourth word and have every word the same word, it just blows my mind. We’re 650 miles away and for us to do that, that’s nuts.”

It’s not clear how many people play the New York Times puzzle every day, although The Conversation website estimated there were about 3 million participants worldwide earlier this year.

While Maynard agreed the odds of the same guesses must be astronomical, she said the incident is also par for the course for the two friends. In fact, they’ve shared similar thoughts or actions at the same time to the point Maynard’s two children weren’t surprised at all by the Wordle wonder.

She stressed that the two friends are “just regular gals,” but have some sort of shared energy or psychic connection that goes back to their childhood. MarkowiczBenoit’s mother was highly intuitive, Maynard said, and would tell her daughter to come to the phone because her friend was about to call.

MarkowiczBenoit would stand there for a few seconds, then the phone would ring and her friend would be on the other line.

And it’s not like the two talked at the same time every day. Maynard reminds people that this was in the 1970s, the days of party lines—“Remember those?” she asked—when several families shared a phone line. Maynard had to sneak past her mother to even be able to use the phone.

The friends were born within two weeks of each other—MarkowiczBenoit is a Cancer and Maynard, a Leo—and their friendship never wavered through marriages, children or when MarkowiczBenoit moved south to Virginia. Over the years, when they talked to each other, they discovered both had the same thing on her mind or one would inquire about a husband or child, pet or job, and the other would say, “I was just getting ready to tell you that,” Maynard said.

“We’re just like connected in this crazy way,” said Maynard. “I don’t read into it and I don’t question it.”

Even so, picking the exact same four words, in the same order, in a daily puzzle “was definitely a big one, even for us,” she said.

While the women and Maynard’s son share the word choices they make each day, they don’t start out with the same word, as some players do. Entries such as audio, alien or alone tend to be popular because they contain so many vowels, but others start with words like share because “s” is used a lot.

“I start with whatever word comes to my brain, right from the get-go,” the Spotsylvania woman said. “Like today, I started with the word smart and she started with bravo. She ended up getting a four and I got a three.”

Because their initial words are so completely random, MarkowiczBenoit kept doublechecking their Wordle entries the day they got the same four words to make sure they hadn’t imagined something. Maynard kept telling her friend to check the time stamp as well because the Vermont women finished the puzzle at 5:10 that morning and the Virginia woman, three hours later.

Whether the recent solution was a crazy coincidence or another example of their stars aligning, the Wordle game gives the two friends and Jarred Snowden—MarkowiczBenoit’s godson—a chance to think about each other for a few moments every day. And that produces a happy energy for all involved.

“It’s just a nice way for us to connect every morning,” MarkowiczBenoit said, “to sit with our coffee and do the Wordle and just laugh back and forth.”

Department K9 has a track record of success and an eagerness for police work.

A first-degree murder charge against a Fredericksburg man will likely be resolved Thursday.

A preliminary hearing is scheduled Friday for a woman accused of extorting more than $40,000 from a Caroline County man by threatening to tell…

The oldest vine in the world is harvested in Slovenia

The oldest vine in the world is harvested in Slovenia

Lisa MarkowiczBenoit is shown with husband David and godson Jarred Snowden at a wedding in Ireland.

Lisa MarkowiczBenoit, right, was the maid of honor at the wedding of her friend, Suzanne Maynard, 36 years ago. Both were 23.

Lisa MarkowiczBenoit smiles outside her store, Wren & Sparrow, in Fredericksburg on Friday, Sept. 16, 2022.