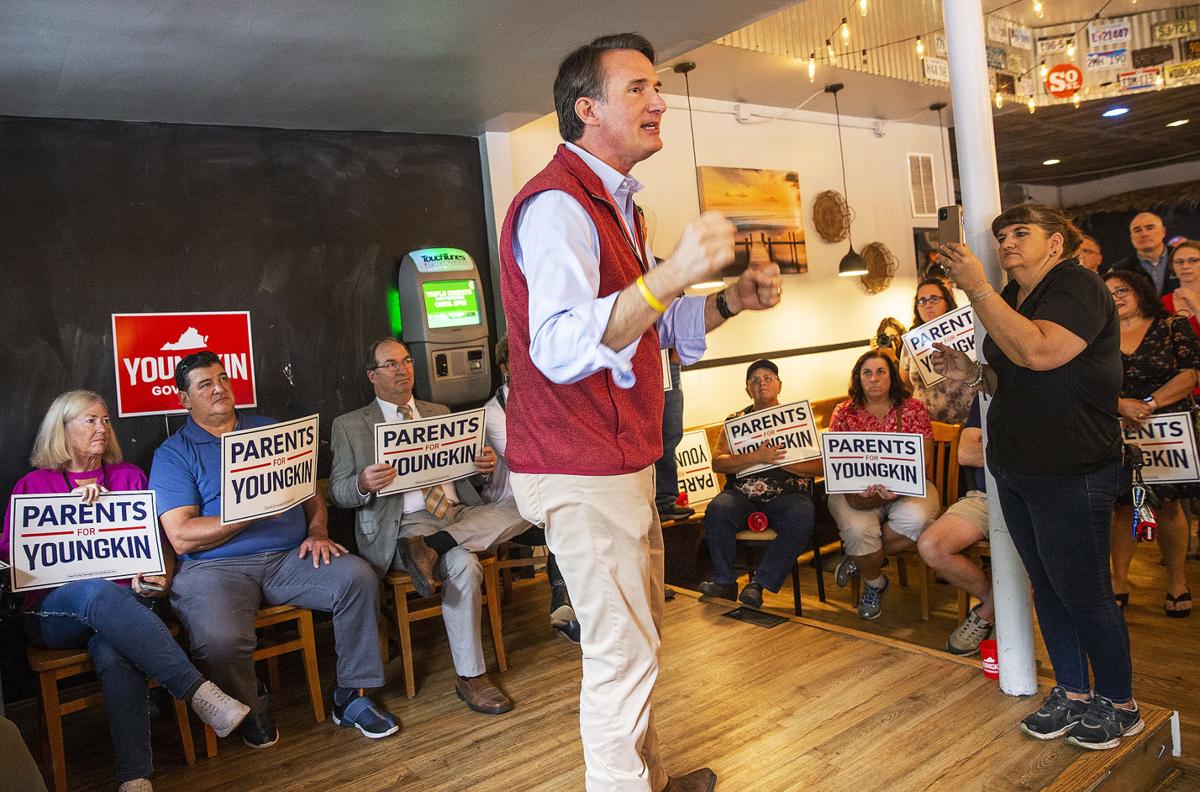 Republican candidate for governor Glenn Youngkin holds a rally at The Pier restaurant in downtown Culpeper on Wednesday. He faces Democrat Terry McAuliffe in the Nov. 2 election. 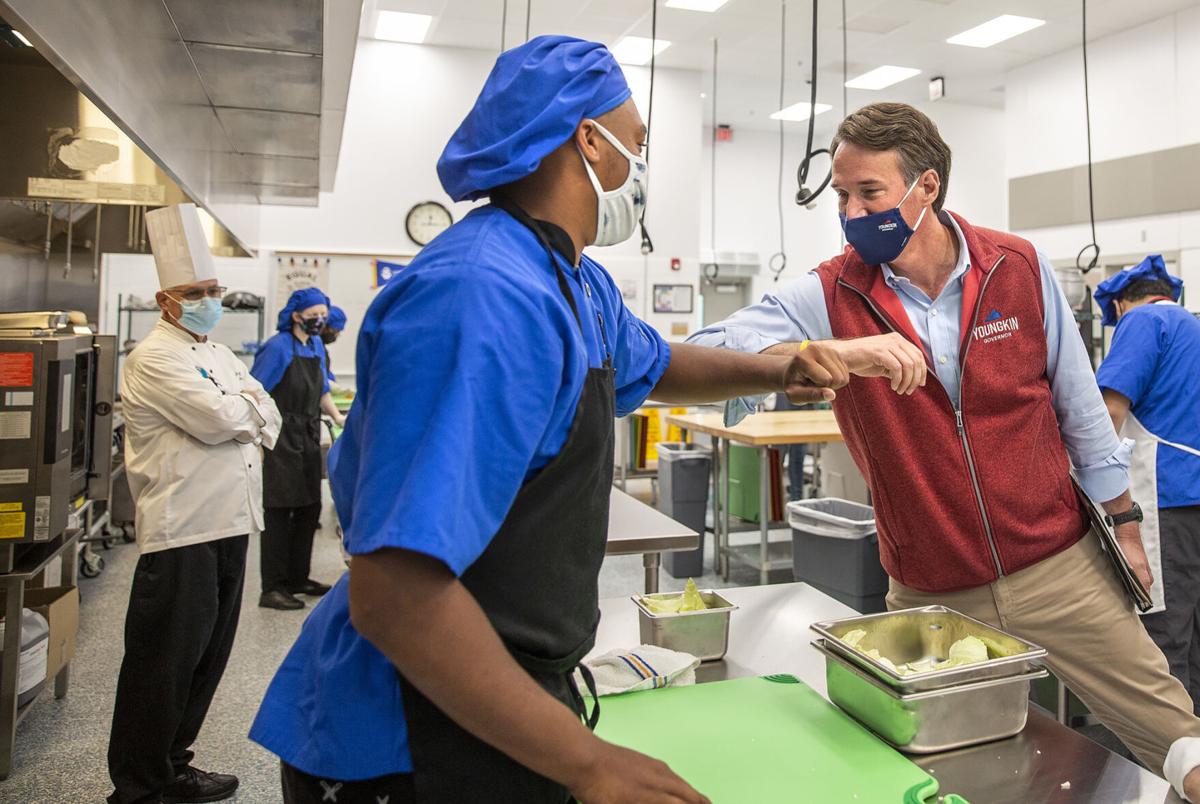 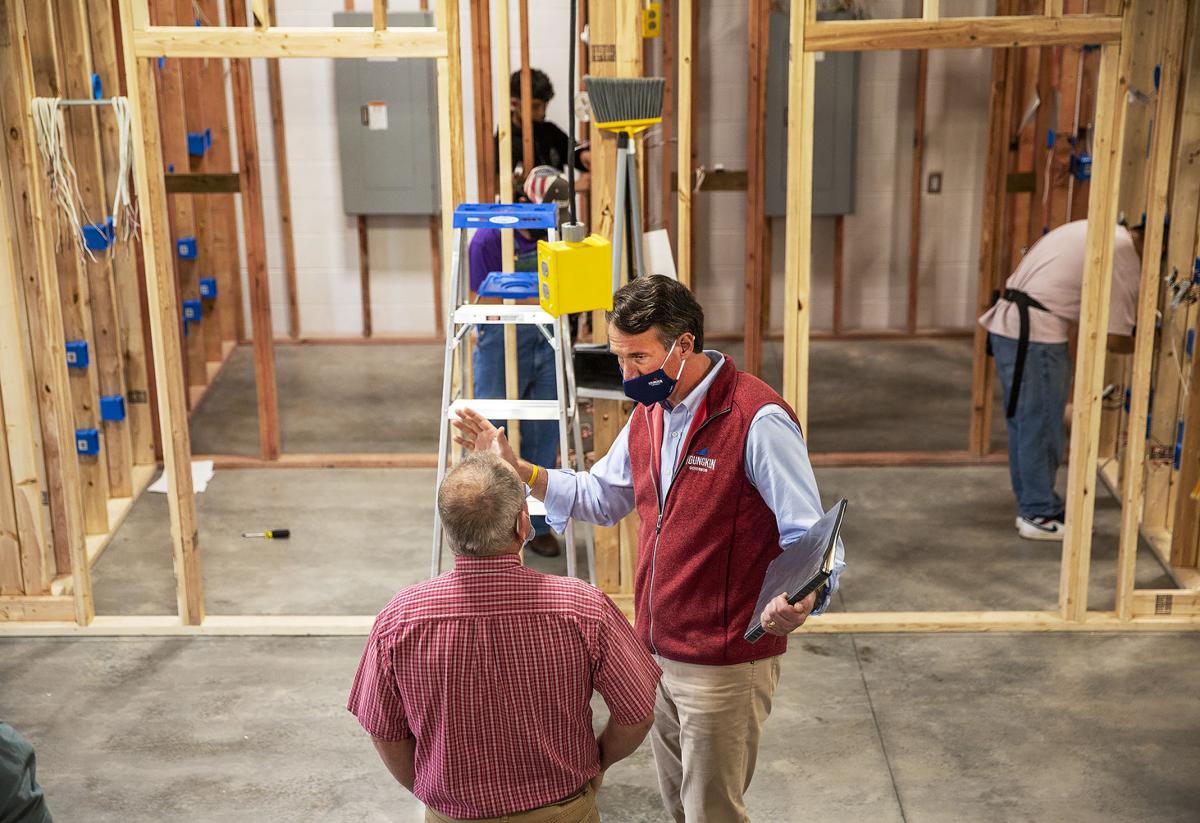 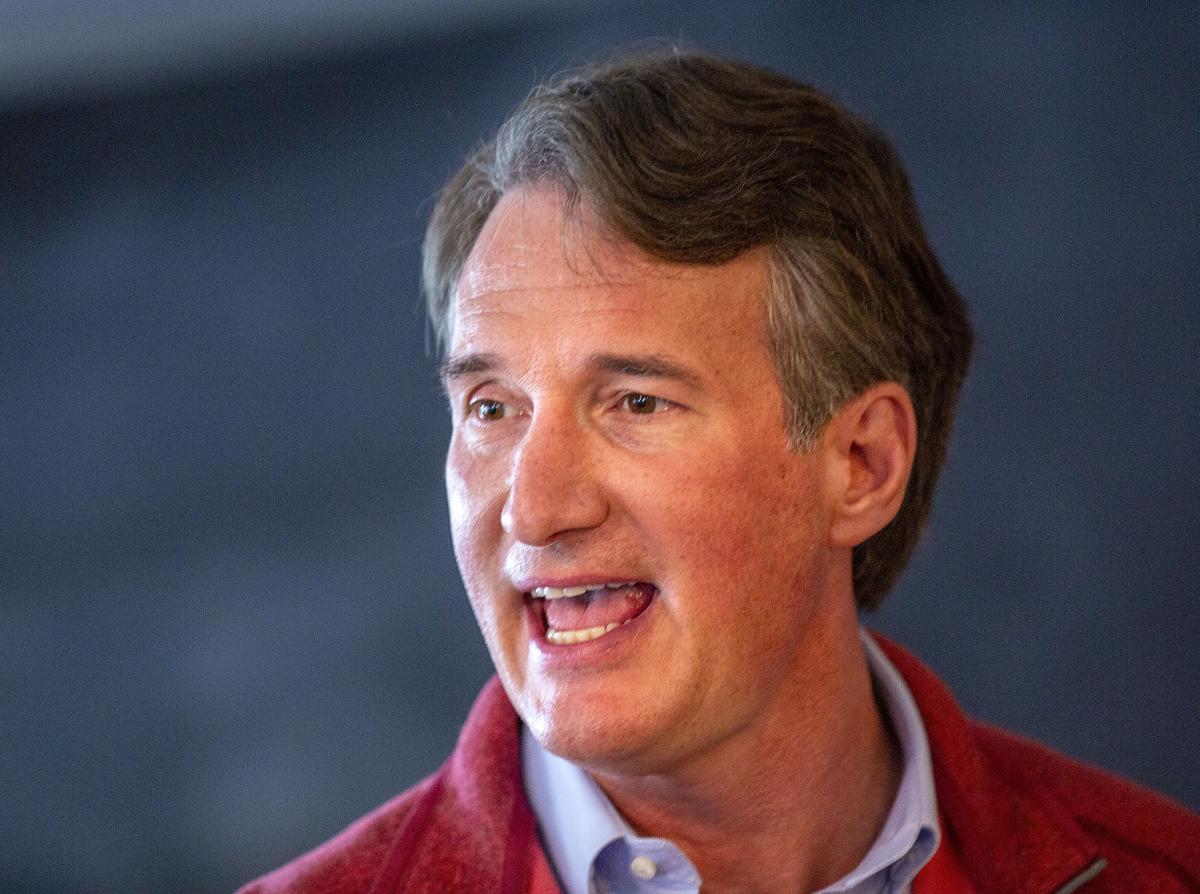 Youngkin played up the importance of Virginia as a key race for all Republicans. 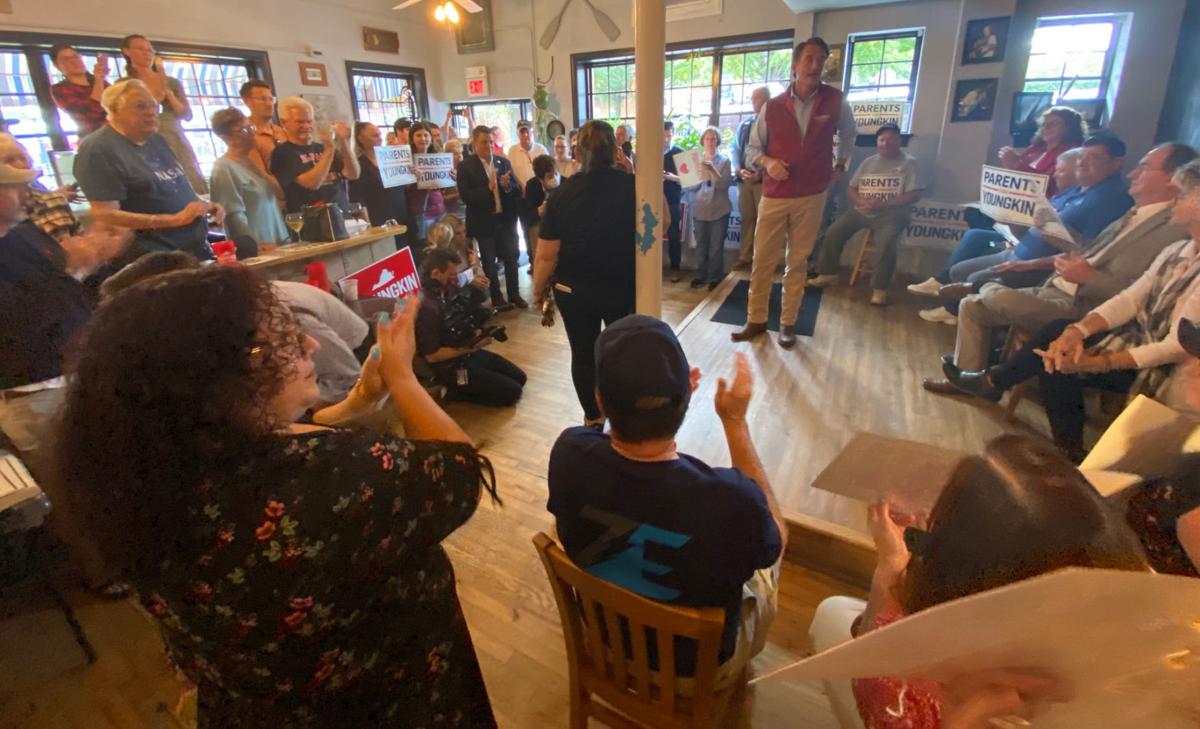 Republican gubernatorial nominee Glenn Youngkin speaks at a rally Wednesday at The Pier in downtown Culpeper. 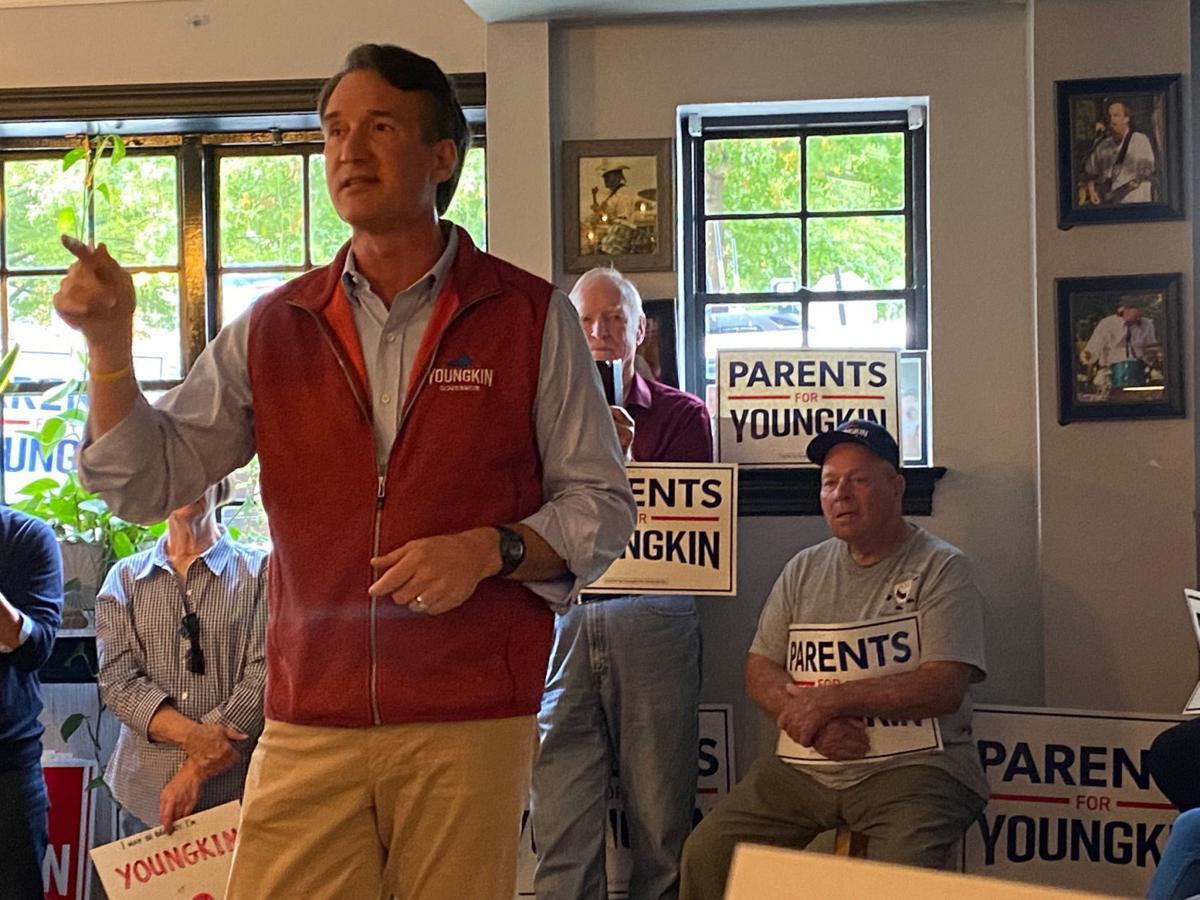 Youngkin addresses a crowd of supporters at The Pier in Culpeper on Wednesday.

About 150 people packed into The Pier restaurant in downtown Culpeper on Wednesday for a “Parents Matter” campaign rally with Republican gubernatorial candidate Glenn Youngkin.

“We gotta all win together,” the 54-year-old native Virginian and former CEO of The Carlyle Group private equity firm said in initial comments to a half-dozen local Republican candidates in attendance.

“There is something absolutely amazing going on across Virginia and this is no longer Republicans versus Democrats. This is Virginians coming together and standing up. We are no longer going to support this liberal agenda that’s trying to turn Virginia into California ... not here, no more.”

The Culpeper County Republican Committee hosted the rally in the seafood eatery at end of East Davis Street. There were loud cheers throughout the 30-minute event.

The crowd chanted Youngkin’s name as he arrived in downtown Culpeper after a tour of the new Culpeper Technical Education Center public high school.

“This facility I just saw is unbelievable. We need CTECs all over Virginia,” he said.

Local GOP Committee Chairman Marshall Keene gave brief remarks at the rally titled in reaction to a recent comment from Democratic gubernatorial candidate Terry McAuliffe, who said during a recent debate: “I don’t think parents should be telling schools what they should teach.”

Keene, who also chairs the Culpeper County School Board, said he has fought for parental choice at the local level.

“We gotta keep it going. Mr. Youngkin is the man at the top who’s going to support us in doing that,” he said. “He is for parents and our individual freedoms.”

McAuliffe has accused Youngkin of modeling himself after former President Donald Trump in seeking to divide people. Youngkin did not speak the 45th president’s name at the Culpeper rally, though a few in the crowd donned Make America Great Again caps.

Youngkin said he almost fell down when McAuliffe made the statement at last month’s debate about parents not interfering in schools.

“The last 20 months has been parents coming together, asking please open our schools five days a week … teach [students] how to think, not what to think. Tell us what material is being used in the classroom or the library so we can choose what we want in our kids’ lives,” the gubernatorial candidate said. “Parents have a fundamental right to be engaged in their kids’ education.”

Youngkin added that McAuliffe confirmed “what we are all fearing—that the liberal leadership believes the government should stand between our children and our parents.”

In response, Youngkin said, a movement is happening across the U.S. The country’s eyes are on Virginia—one of only two states, including New Jersey, with statewide races on the ballot in November.

The national news media is watching, too, as the gubernatorial race in Virginia is seen as a foreshadow of next year’s congressional races. CNN attended Tuesday’s local rally, along with NBC News out of New York and a Japanese outlet, Kyodo News, among others.

“The country needs us to win Virginia,” said Youngkin.

If elected, he promised that on his first day he would cut the cost of living in Virginia through tax rebates, eliminate the grocery tax and double-standard deductions. Youngkin vowed to exclude veterans retirement benefits from income tax and “reestablish expectations of excellence in our schools.”

He said Virginia schools failed under McAuliffe’s term in office as governor: “The gap is wholly unacceptable,” Youngkin said.

On day one, the candidate said he would launch 20 “innovation charter schools,” raise teacher salaries and invest in facilities and special education.

“Then we are going to hold the schools accountable for delivering because that’s our job, to deliver for our children,” he said.

It will start with a new curriculum, Youngkin added, evoking the hot-button term, “critical race theory.” Some believe is being widely taught in public schools. According to Britannica.com, critical race theorists hold that racism is inherent in the law and legal institutions of the U.S., maintaining inequalities between whites and Black people.

“It teaches our children to view everything through a lens of race to divide our children up into buckets and then pit them against one another and steal their dreams,” Youngkin told the Culpeper crowd.

He vowed there would be no more business lockdowns and that he would stand up for Virginians’ constitutional rights. Youngkin said he would order an audit of the Virginia Employment Commission and the Department of Motor Vehicles, fire the parole board, raise law-enforcement salaries and invest in mental health.

“We have a chance to stand up and do something special on behalf of the commonwealth, the country, families—to make a statement that will be heard around the country. …Our nation’s future is about to be fundamentally impacted by Virginia’s present,” he said.

Erica Wohlueter, a parent of a local high school student, attended the rally to stand up against what she said is happening in Loudoun County, where parents have been showing up in droves to challenge school board policies.

“I want parents to be able to talk to the board and the teachers,” she said.

Wohlueter said she’s always had a good relationship with her daughter’s teachers here, and wants to keep it that way. She explained why she is supporting Youngkin.

“He will encourage everybody to work for the children and not try to separate them,” Wohlueter said.

Culpeper resident Charles C. Daniels, a retired U.S. Marine who worked at Quantico, attended the rally to hear what Youngkin had to say.

“He was pretty good,” he said. “Things need to be changed. … Too many long-term politicians [are] not really focusing on the constituents.”

Daniels said he has grandchildren in public schools and his son is a teacher.

“Schools are not the place to experiment with children,” said Daniels, who added that he attended public schools in Camden, N.J. “The schools collapsed there 50 years ago.”

Republican candidate for governor Glenn Youngkin holds a rally at The Pier restaurant in downtown Culpeper on Wednesday. He faces Democrat Terry McAuliffe in the Nov. 2 election.

Youngkin played up the importance of Virginia as a key race for all Republicans.

Republican gubernatorial nominee Glenn Youngkin speaks at a rally Wednesday at The Pier in downtown Culpeper.

Youngkin addresses a crowd of supporters at The Pier in Culpeper on Wednesday.