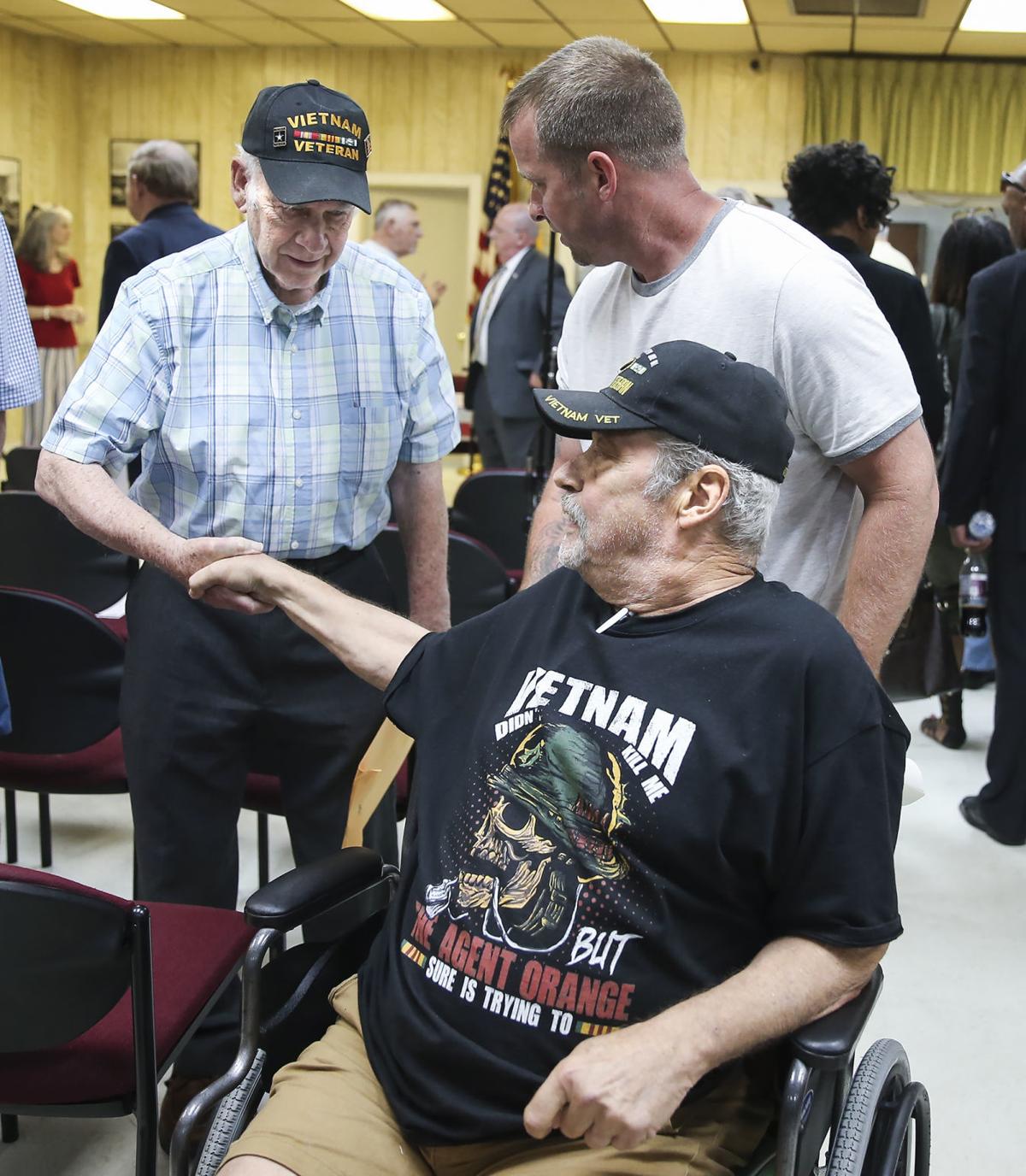 Vietnam vet David King, with son Aaron, shakes hands with fellow veteran Linden Plummer after the ‘Voices of Veterans’ event. King is frustrated with the VA care he has received for cancer. 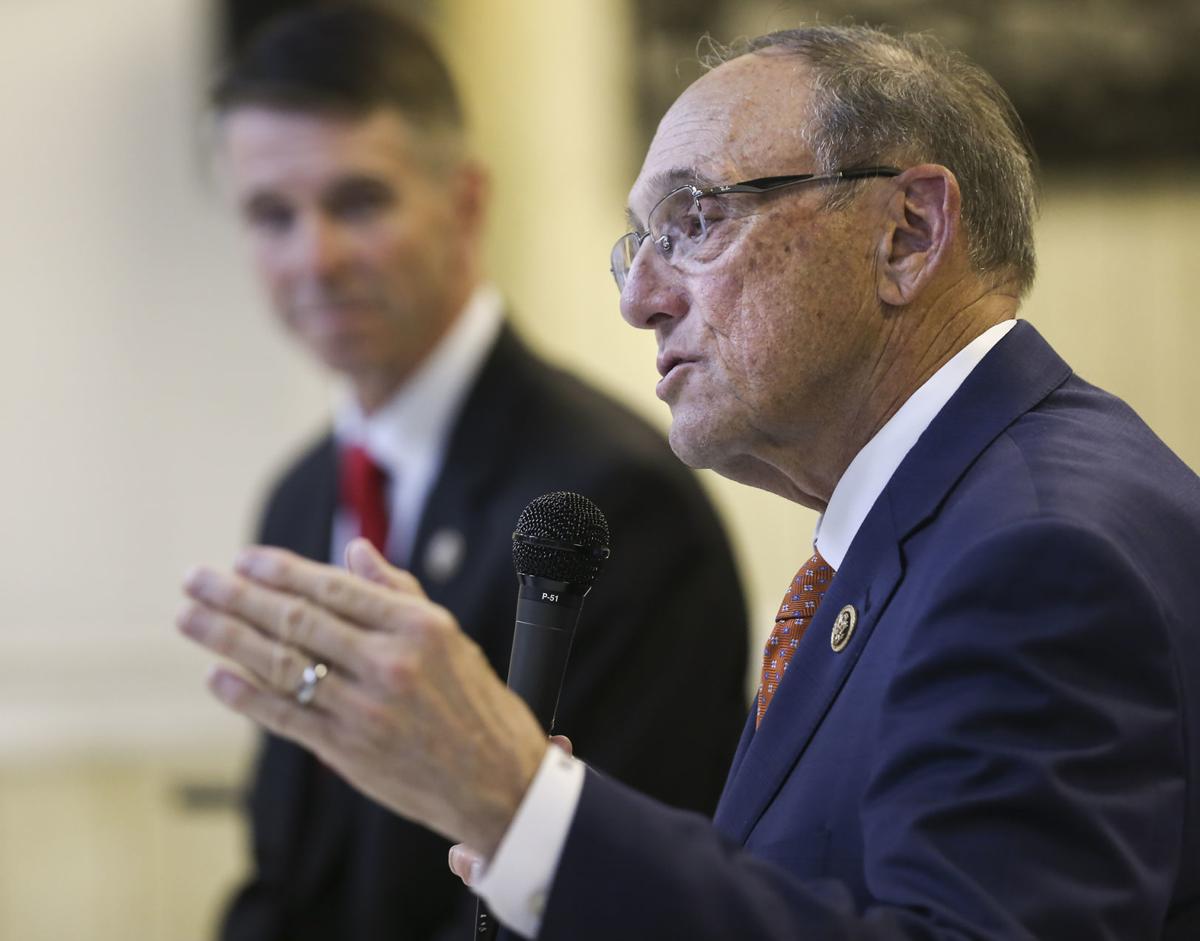 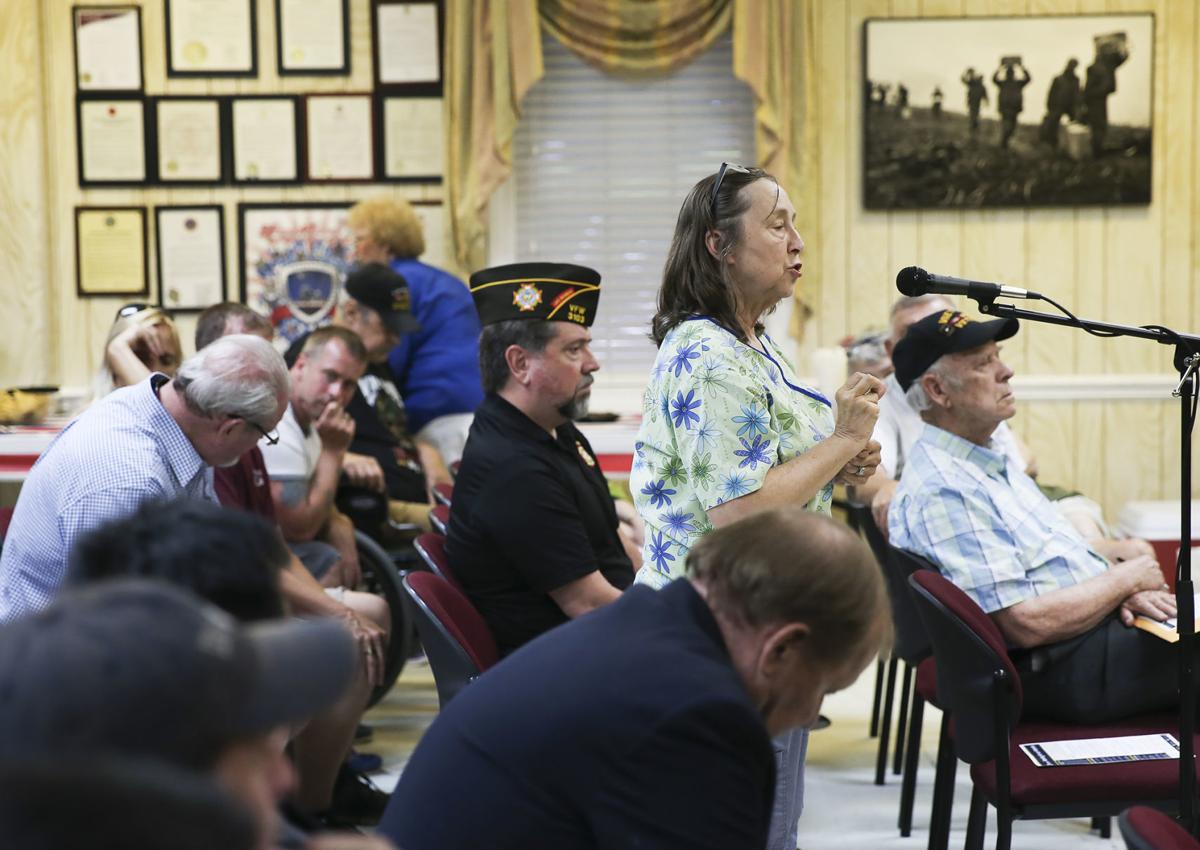 Debra King, wife of Vietnam veteran David King, talks at a forum at local VFW Post 3103 about her frustration with how the VA has diagnosed and treated her husband’s cancer. 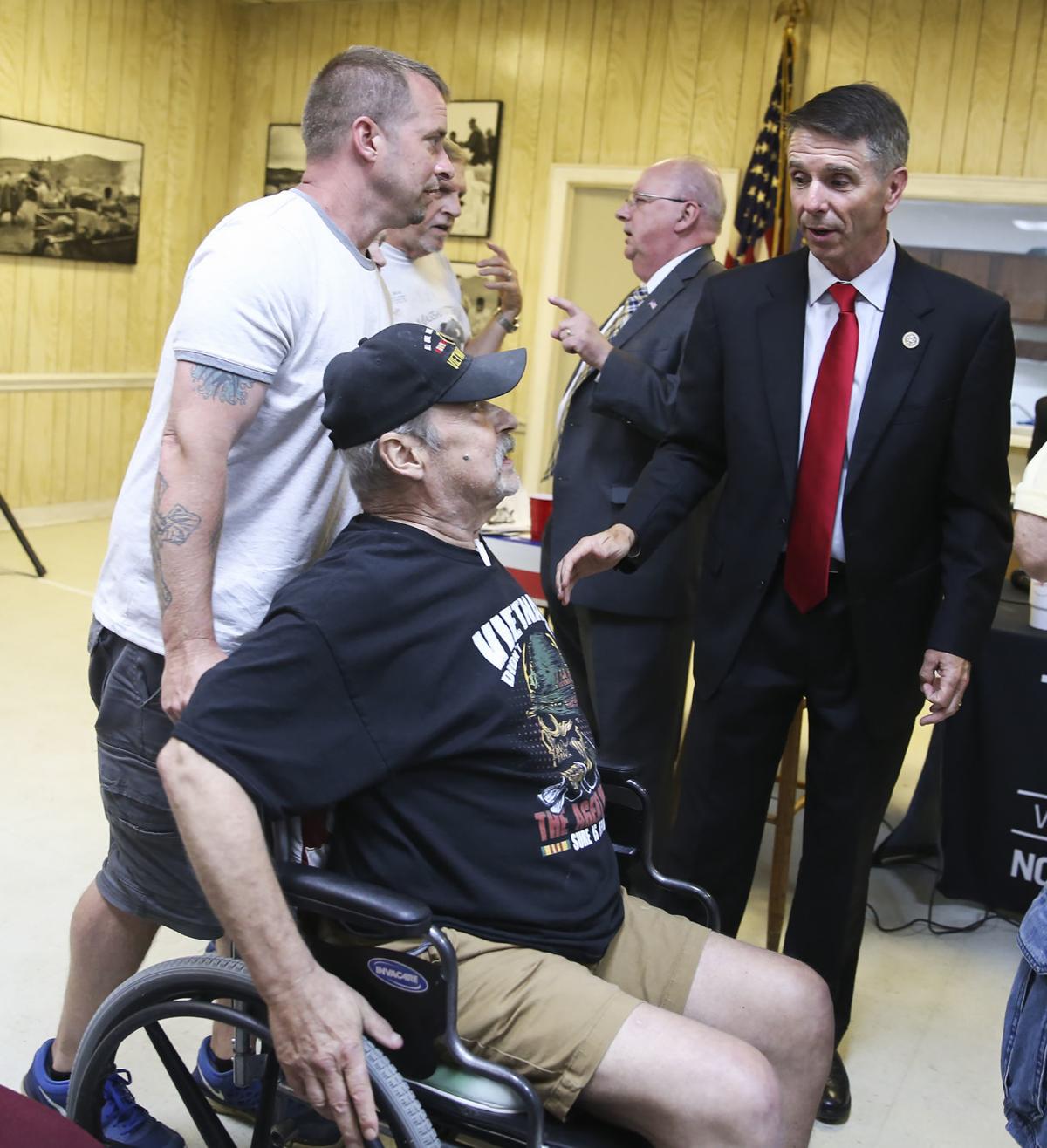 Moments after two congressmen described the reforms taking place in the U.S. Department of Veterans Affairs, Debra King described an ordeal that illustrated why change is needed.

The Spotsylvania County woman was among about 90 people at VFW Post 3103 in Fredericksburg Thursday afternoon for “Voices of Veterans,” a session hosted by Rep. Rob Wittman, R–1st District.

The hall got so quiet when she talked, a person could have heard a pin drop. Some in the audience—peppered with veterans whose hats told where they’d served or that they’d earned Purple Hearts—shook their heads in disbelief as she relayed the tale of her husband, Vietnam War veteran Dave King, who served three years in the Army and 12 years with the National Guard.

“Please advise me what to do because I am his caretaker. I still have to work, but he is in so much pain,” Debra King pleaded. “I don’t know what to do anymore. I just feel like the VA has failed us.”

Wittman pledged to look into the case, and that of others who spoke at the event, which included Tennessee Congressman Phil Roe, chairman of the Veterans’ Affairs committee. The two praised the newly passed VA Mission Act of 2018, which is designed to offer veterans their choice of health care in VA facilities or elsewhere.

The reform comes in the wake of reports four years ago that veterans in Phoenix died while waiting to get appointments at VA facilities, and subsequent investigations showed problems throughout the VA system.

Debra King would say none of those happened in her husband’s case.

Dave King was 19 when he joined the service in 1969 and spent all of the next year in the jungles of Vietnam. He was with the 20th Engineer Brigade in South Vietnam, an area sprayed with Agent Orange.

The military used the herbicide to eliminate the enemy’s forest cover and crops, but later discovered it contained a deadly cancer-causing chemical.

King, now 67, became a land surveyor and spent 39 years climbing up and down hills and roadside banks. He never had any health problems until recently and hadn’t even seen a doctor since 1991.

All that changed in November when he felt what he described as a “god-awful stomach ache” and visited the McGuire VA Medical Center in Richmond. He and his wife of 47 years quickly realized how serious the situation was.

Doctors found cancer in his colon, liver, lung, lymph nodes and bones. Tissue samples were taken during two biopsies to try to determine where the cancer originated so they could classify what kind of cancer it was.

“We waited patiently for what seemed like forever” as biopsies were sent to three labs, “and they all came back not readable,” Debra King said. “They said that possibly the needle biopsies were too small and dried out due to the length of time between the biopsy and the testing.”

As a result, the veteran’s condition is listed as “undifferentiated cancer.” VA officials have told the Kings he can’t qualify as disabled under Agent Orange guidelines unless the type of cancer is determined.

“He believes the VA is stalling until his death,” said Dave King’s brother, John, who lives in Arizona.

Doctors need to take a larger sample during another biopsy, but Dave King is weak and in a wheelchair.

He has received chemotherapy and radiation since the December diagnosis. He developed sepsis and was hours away from dying, according to medics who came to the Kings’ home, and he’s been diagnosed with diabetes.

Still, he wants the next biopsy.

“Why is the surgery important to him at this time?” King’s wife asked at the meeting. “Because he’s concerned about me and where that’s gonna leave me when he’s gone.”

‘MY DAYS ARE DONE’

Dave King said the same later, outside the VFW Post. Other Vietnam veterans came up to shake his hand and offer well-wishes, and King, who said he suffers from “chemo brain,” needed to get away from the crowds.

It’s been a tough haul, he said about the last eight months.

When he was hospitalized for sepsis, doctors told him he’d been given too much radiation and chemo at the VA facility, that his body couldn’t take any more.

The cancer caused his ribs to break. He can’t do anything, even go to the bathroom, without assistance.

He and his wife said the treatment from VA officials, who tried to send him home after a colonoscopy when he was too weak to get out of the wheelchair, disgusted him. She has spent 35 years working in medical records in two doctors’ offices “and we would never send anyone home in that condition,” she said.

Also, each time they asked if he could get treatment in Fredericksburg, they were told no, Debra King said.

Still, he wants to do what he can for his wife. If he’s qualified as disabled because of Agent Orange, she would get a portion of his VA benefits when he dies.

“I want this to help her,” Dave King said. “My days are done. My future’s not looking all that bright. I don’t know how much fight I got left.”

Information about the veteran’s case was forwarded to Wittman’s office, and on Thursday, the congressman brought with him John Brandecker, director of the McGuire facility.

Brandecker told Debra King during the session that he didn’t disagree with anything she said about Agent Orange, that sometimes “there is not always a direct link or correlation from one thing to the next.”

He brought patient advocates and doctors with him, and he pledged they would work with the Kings and other veterans “to make sure that we help you.”

Dave King hopes the help comes, for his sake, as well as that of his three children and seven grandchildren.

“I heard a lot of good comments,” he said. “Where it goes, God only knows.”

Congressman Rob Wittman encouraged veterans who are having trouble getting their cases processed through the Department of Veterans Affairs to call his office.

"We can call and intercede on the phone with the VA people," he said. "That's what we're there for."

Also at Thursday's session, Bill Johnson–Miles of Stafford County asked how the Congressman could help junior enlisted service members, whose basic pay is at the poverty level and at least 7 percent of them receive food stamps. Dan Noland, who did three tours in Vietnam, mentioned problems he had dealing with Parkinson's disease, which didn't show until two years ago. VA officials told him he made too much money to get treatment at a VA facility, even though a private doctor confirmed that post-traumatic stress disorder had triggered Parkinson's.

And, 80-year-old veteran Linden Plummer said he also sought assistance, many years after the fact, for PTSD and ended up being screened for suicide prevention. He noted that he's not about to commit suicide, but was disappointed that VA officials promised to check in with him every 90 days, but he hadn't heard from anyone since January.

Del. Nick Freitas, R-Culpeper, is putting his military service and family values at the forefront of his first television ads in his campaign for Virginia's 7th District seat in Congress, a crucial race in Republicans' effort to regain control of the U.S. House of Representatives.

Vietnam vet David King, with son Aaron, shakes hands with fellow veteran Linden Plummer after the ‘Voices of Veterans’ event. King is frustrated with the VA care he has received for cancer.

Debra King, wife of Vietnam veteran David King, talks at a forum at local VFW Post 3103 about her frustration with how the VA has diagnosed and treated her husband’s cancer.