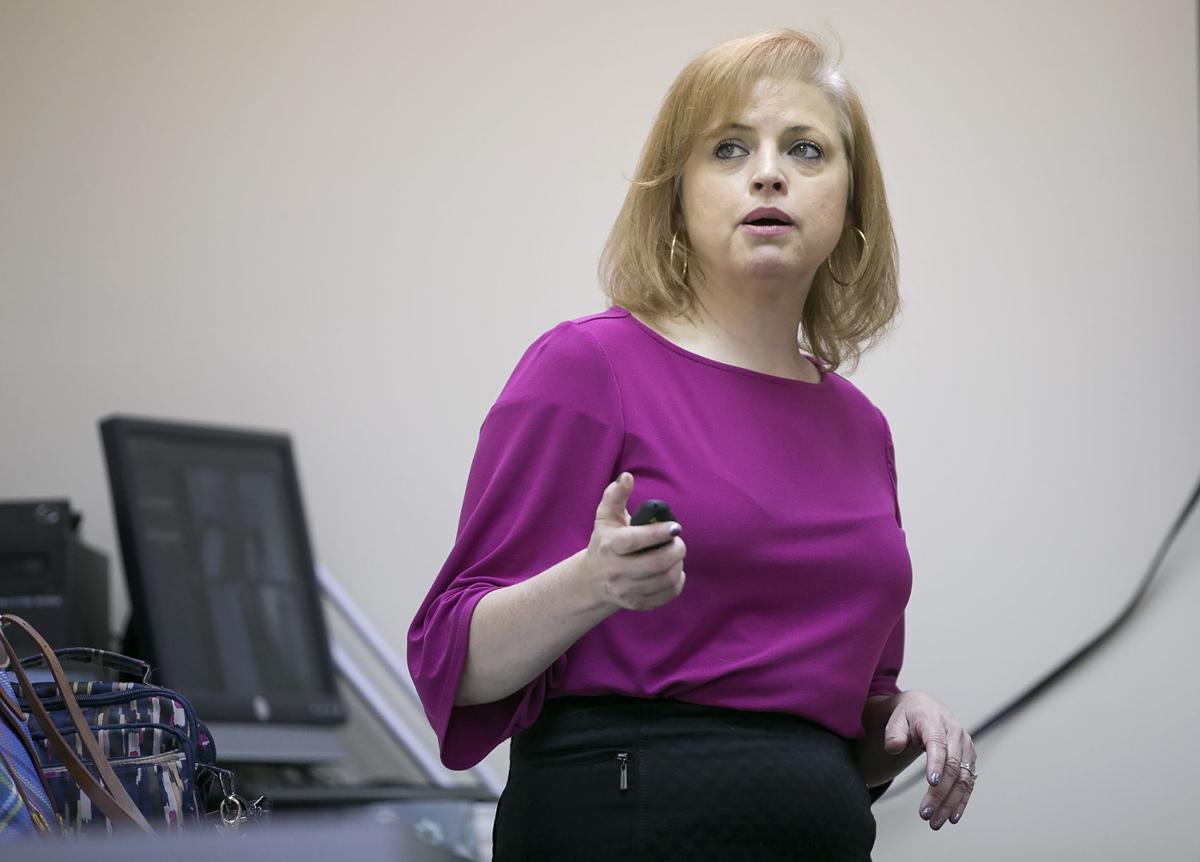 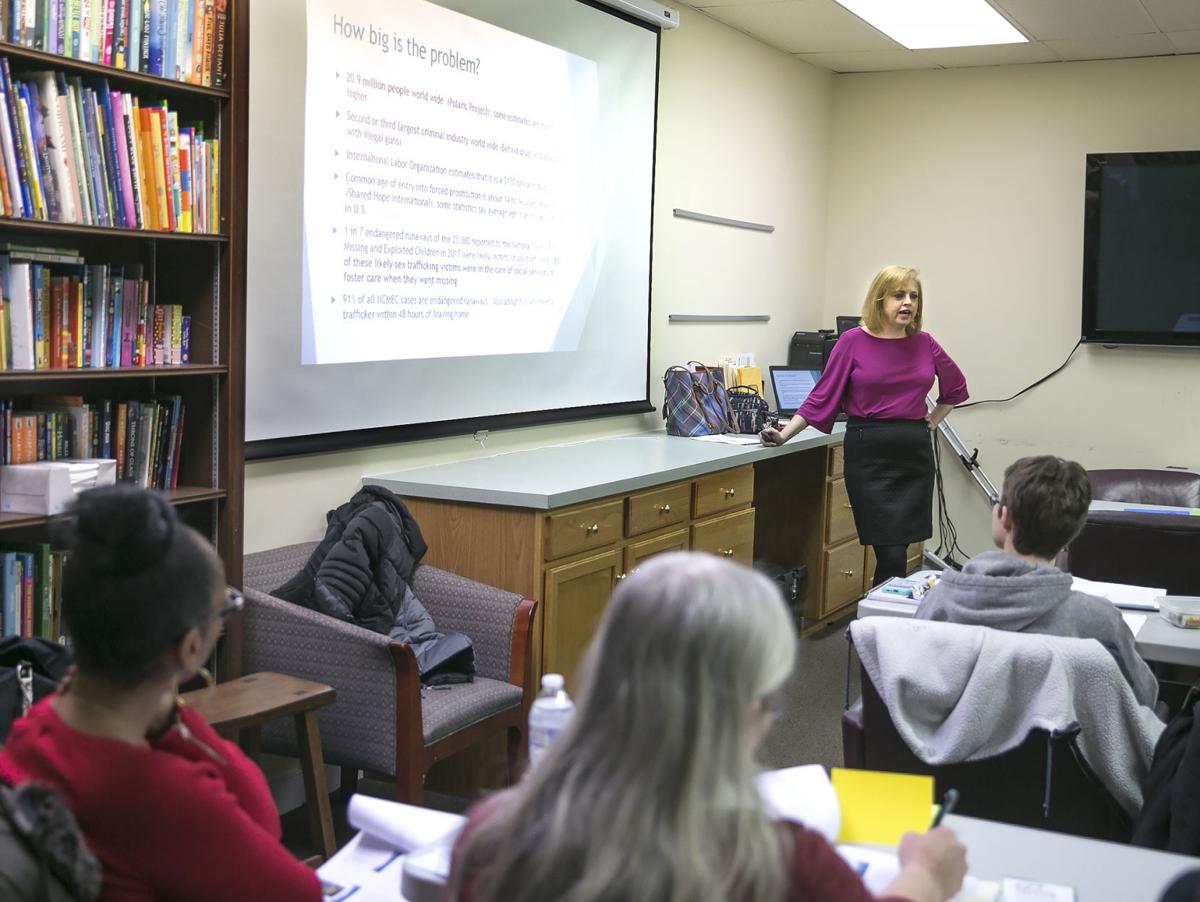 Trampe says many human trafficking victims she has worked with are local residents and graduates of area schools.The Central Virginia Justice Initiative is a volunteer group focused on stopping trafficking. 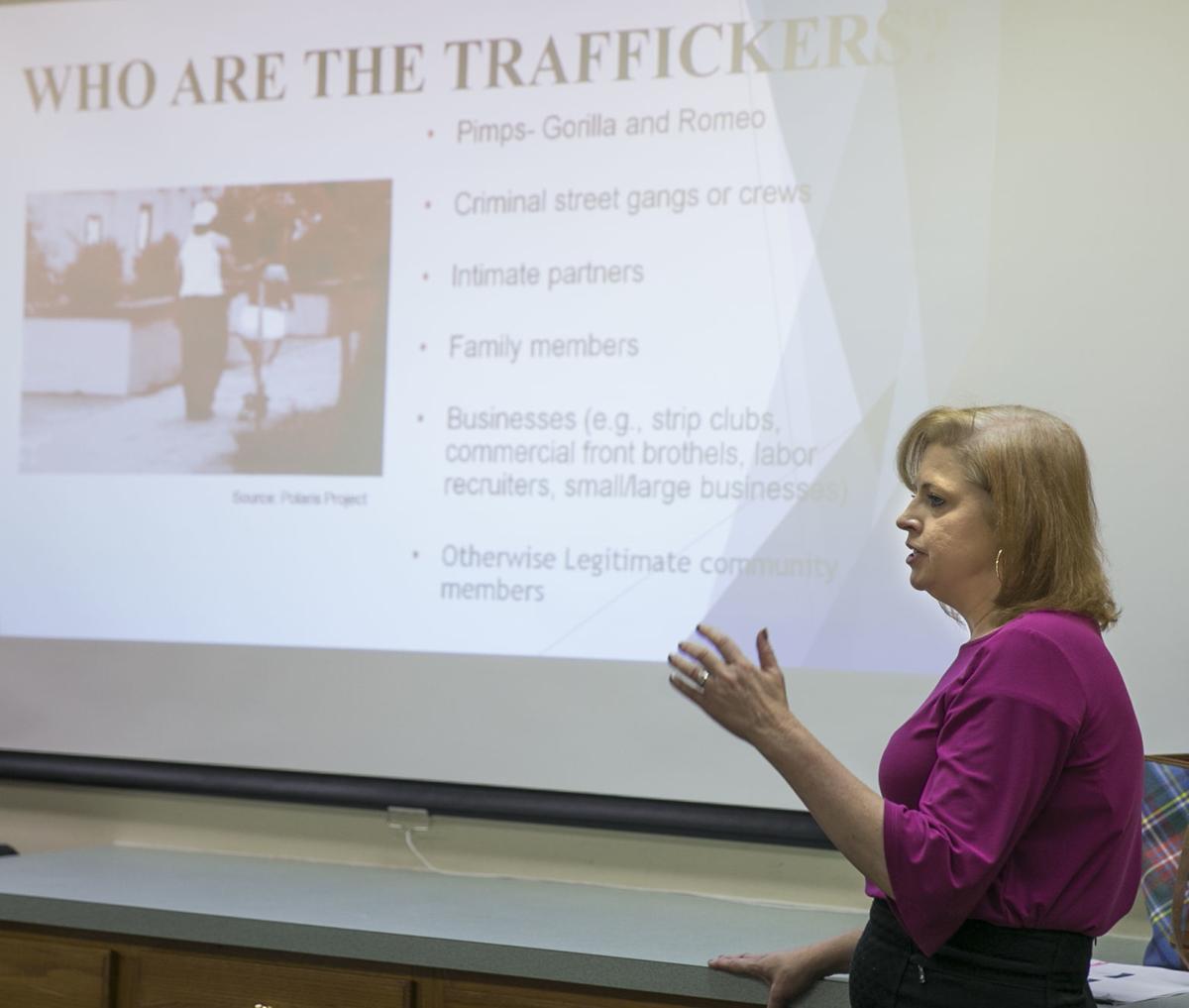 When people talk about who’s likely to be lured into human trafficking—and then regularly sold for sex against their will— the discussion focuses on the vulnerable.

Runaways, foster children aging out of the system, the homeless, victims of abuse or violence, the poor and the oppressed often top the list.

But Bill Woolf, who leads a Northern Virginia organization focused on fighting human trafficking, recently told a Fredericksburg audience there’s a much bigger sector at risk.

“We’ve done the research, and we’ve learned that lack of information is the primary vulnerability that leads our youth to be lured into this,” said Woolf, executive director of the Just Ask Prevention Project.

The leader of a Spotsylvania County group with a similar focus put it another way.

“It can happen to your kids,” said Michele Trampe, executive director of the Central Virginia Justice Initiative. “It just takes somebody exploiting the vulnerability.”

Girls between 12 and 14 are the targeted age of traffickers, Trampe said. And if they happen to be in a home where there’s already some abuse or neglect—or even if they have low self-esteem—traffickers can seize an opportunity.

“Maybe they need somebody who pays a lot of attention to them, and [the traffickers] tell them everything they want to hear, they make all kinds of promises,” she said.

Trampe has learned more than she could have imagined about the dark world of exploitation. Six years ago, she asked for a meeting with Capt. Jeff Pearce of the Spotsylvania Sheriff’s Office and expected him to tell her the problem was limited to the big cities.

Instead, Trampe learned of the “force, fraud and coercion” traffickers use to keep their victims under control, and she felt a divine calling to do something.

The wife of Spotsylvania Board of Supervisors member Paul Trampe answered the summons. She retired from 30-plus years in accounting and finance, started the faith-based organization and recruited about 40 like-minded volunteers.

First on the group’s list of strategies is making people aware that trafficking—forcing humans into labor or sexual exploitation—doesn’t just happen overseas. Some of the victims she’s worked with are local residents, graduates of neighborhood schools.

Volunteers offer “Human Trafficking 101” classes in which they offer tips on tricks used by traffickers, including recognizing the way a manipulator gets his hold on teenage girls or young women.

“He is convincing his victim that he’s the only who cares about her,” Trampe said. “It’s the psychological stuff, that ‘If you love me, you’ll do this for me.’ That’s always manipulative. It doesn’t matter whose mouth it’s coming from.”

The Central Virginia Justice Initiative also tries to change the “prejudices we have as a society,” Trampe said. Often, people see prostitutes and believe the women are selling themselves because that’s what they want to do.

“They don’t see the pimp or the gang or even sometimes family members, boyfriends or girlfriends, who are really forcing them into it,” she said.

Her faith-based group regularly speaks to church congregations or other community groups. It also offers movies about the issue, appropriate for different age groups. Anyone interested in a speaker can call 866/620-2889, Ext. 1, or email justicecva@gmail.com.

Woolf’s organization created a curriculum to educate high school students about the threats of trafficking and how teens and adults can respond. He cited the case of Courtney, the daughter of his organization’s technical adviser Susan Young.

While Courtney was being lured into the sex trade by members of the MS–13 gang, she approached almost two dozen school staff, but she couldn’t bring herself to divulge what was happening. His group picked the name “Just Ask” in reference to such situations, and he encourages adults who see signs of trouble to ask teens what’s happening to them.

“If educators had been trained to properly respond, maybe that exploitation never would have happened or maybe it wouldn’t have been so severe,” Woolf said.

Meg Bohmke, a member of the Stafford Board of Supervisors, has attended three training sessions on trafficking and believes education is the key, both for young people and their parents. She’s heard about girls lured into the sex trade by the offer of the latest purse or shoes and cautions parents to be mindful of what their kids are doing and where they’re going.

Turning a blind eye to the issue, by thinking it doesn’t happen here, won’t help.

“People were not aware of the opioid epidemic until it affected someone in their family or somebody they knew,” Bohmke said. “I know people say it [happens to] people falling through the cracks, but what I continue to learn is that this crime does not discriminate.”

The Virginia Department of Criminal Justice Services says the following are victims of human trafficking:

The Mine Run chapter of the National Society Daughters of the American Revolution will host a session on human trafficking at 10 a.m., March 9. The meeting will be held in the fellowship hall of Redeemer Lutheran Church, 5120 Harrison Road in Spotsylvania County.

Speakers include Bill Woolf and Susan Young from the Just Ask Prevention Project and a human-trafficking victim.

'Little did we know that a gang was brainwashing her'

It all seemed so harmless in the beginning. Some teenage girls went to a movie at the mall, where a nice-looking, well-mannered young man intr…

Sex trafficker broke down her 'will as a human being'

With her dark blonde hair pulled in a ponytail, the woman who identified herself as “Amy” sat at the table in front of the crowd and seemed pa…

MODERN-DAY SLAVERY: 'You are a dog, you're their product'

One was sold for sex against her will after getting involved with a well-mannered young man who turned out to be a gang member. Another needed…

Trampe says many human trafficking victims she has worked with are local residents and graduates of area schools.The Central Virginia Justice Initiative is a volunteer group focused on stopping trafficking.