The COVID-19 pandemic took thousands of lives in Virginia, but the disease's destabilizing effect on residents and institutions had an unanticipated impact that's gained increased attention: a surge in killings throughout the state.

The troubling rise is eclipsed only by the percentage of Black people who fell victim during the pandemic. They accounted for 68% of those killed in 2021, the highest percentage in at least 41 years, a Richmond Times-Dispatch analysis of state crime data shows.

The state's homicide count is exceptionally high even when factoring in population growth. Virginia's homicide rate last year surged to 6.49 killings per 100,000 people, the most since 1997. The decade of the 1990s was one of the worst on record for killings in Virginia, fueled by the crack cocaine epidemic of the period.

There's no consensus among criminologists and law enforcement officials on the reasons for the surge, but the pandemic is cited more often than not as a principal factor.

On a national level, some also point to a police "pull back" in the wake of the George Floyd killing by police in Minneapolis, and officers leaving departments in droves as the profession became less desirable, especially in big cities. Others have blamed bail reform measures that released some violent offenders back onto the streets, and record sales of firearms that resulted in some weapons ending up in the wrong hands.

Virginia gun sales soared to historic levels in 2020 during a tumultuous year marked by the long-term uncertainty of COVID-19, the economic turmoil it brought, protests over racial injustices and demands to defund the police. Estimated firearm sales based on mandatory criminal background checks on buyers smashed monthly records — first in March 2020 with 80,228 transactions, and again in June 2020 with 81,204 transactions.

"The pandemic absolutely played a role in a national increase in violent crime for a couple of years," said William Pelfrey Jr., a professor and criminologist at Virginia Commonwealth University's L. Douglas Wilder School of Government and Public Affairs. "And there's a few explanations for that. I think the minimization of social contact and the abrogation of social networks was one piece of it."

Pelfrey was referring to the disconnect that occurred between people — especially those living in high crime areas — and many of the positive things they typically rely on during normal times, such as schools, churches, mentors and counseling.

Those examples were cited earlier this year by John Roman, a senior fellow in the Economics, Justice and Society Group at NORC at the University of Chicago, in a Wall Street Journal article on the reasons for the national surge in homicides.

"The overarching explanation for the increase in violence over the last two years is the pandemic," Roman said.

Pelfrey believes "forced contact within households," or people essentially being restricted to their homes, as another piece of it. He cited an example he provides to students who take his class on research methods: violent crime skyrockets in Alaska for about six months during winter, "and then it goes way down."

"So during the winter, you're stuck in your house with only your family members, or a few neighbors," he said. "Alcoholism goes up, drug use goes up, violent crime goes up."

'You don't know where the next paycheck is coming from'

The economic impact of the pandemic is another factor that likely contributed to the violence, Pelfrey said.

"The people who were most effected during the COVID pandemic were daily or hourly employees, rather than annual salary people," he said. "So there were a lot of people who lost their jobs, who are struggling financially, and that creates reciprocity in violence. You're angry, you don't know where the next paycheck is coming from. The pandemic is going on, and the kind of jobs you need are disappearing. And violence is an inevitable and predictable outcome."

Pelfrey views that with healthy dose of skepticism, because "that's an extraordinarily difficult thing to measure."

"It's impossible to measure the impacts on police reluctance to enforce the law," he added. "That did happen during the pandemic and subsequent to the riots. But we don't know how much that happened. Very few police chiefs will come right out and say, the police didn't do their job with the same enthusiasm that they usually do."

In Dallas, the city recorded its highest murder total in more than 15 years in 2020, but killings fell 13% in 2021 after officers were encouraged to "re-engage" with the community, according to news accounts.

"Our police officers nationally have felt underappreciated, they felt under fire," Dallas police Chief Eddie Garcia told the Wall Street Journal in January. "That's what led to disengagement in our communities where we need to engage even more."

The sizeable reduction in the ranks of police officers available to enforce the law — particularly in large cities — may have had a much greater impact than a police pull back, Pelfrey noted.

"So post-George Floyd, policing became a less desirable job," he said. "And many big city police departments have seen significant increases in officer departures. Those numbers have gone way up. It's usually about five percent a year, now it's more like 10 to 15 percent. And police agencies are having a real hard time recruiting and hiring new officers. Richmond is an example of that."

"And if you couple that with a reluctance by police to go out and look for offenders as a result of the pandemic, or the post-George Floyd protests, then you've got fewer police officers on the streets - with some less inclined to do pro-active work," he said. "And that could contribute to an increase in violent crime. That's a really hard thing to measure, but it's the kind of thing that makes sense."

The number of homicides exploded in five of Virginia's largest cities, including Richmond, from the pre-pandemic year of 2019 to 2021.

Black victims historically have been over-represented in the state's homicide count, but those numbers rose even higher during the two years of the pandemic.

Black people make up 19.05% of Virginia's population, but they accounted for 68% of all homicide victims last year. That's up slightly from 2020 when 66% of state homicide victims were Black.

The only comparable rates of Black killings to 2020 and 2021 occurred in the 1990s, when the crack cocaine epidemic ravaged Black neighborhoods and led to a surge in homicides. The number of Black victims as a percentage of all killings hovered around 65% during that period, and only topped 66% one year, in 1992.

The tragic loss of Black lives in Virginia is one side of a deadly equation that includes an equally disproportionate number of black offenders.

Of the 381 homicide arrests that were reported in the state's recently released Crime in Virginia report for 2021 killings, 282 are Black, or 74 percent of the total. During the first year of the pandemic in 2020, 64 percent of the 344 people charged in homicides statewide were Black.

"In the United States and in Richmond, race is largely a proxy for socio-economic status," Pelfrey said in addressing the large percentage of Black homicide victims. "If you're African-American, or Black, you're likely to be on the lower end of the socio-economic status continuum. So those are the people who are hourly workers or daily workers, and most likely to have lost their jobs or had curtailed income during the pandemic. And that's where the predictable violent outcomes are most likely."

Pelfrey said Blacks are over-represented in prison, in the homicide rate, in arrests and "pretty much every dimension of the American criminal justice system."

"The only questions is, how disproportionately disadvantaged are African-Americans?" Pelfrey said. "And in the past couple of years in homicide rates in Richmond, it's a substantial disadvantage."

Cities and counties with highest COVID-19 infection rates in Virginia

Cities and counties with highest COVID-19 infection rates in Virginia

The mother of a 2-year-old girl found dead in an Oceanfront hotel room this week was arraigned Wednesday on a felony child abuse charge. Leandra Andrade, 38, of Washington, arrived Tuesday at the Virginia Beach city jail, shortly after her release from a hospital. She’s being held without bond. Her arraignment was held in Virginia Beach Juvenile and Domestic Relations District Court. A bond ...

John Hinckley Jr. announced on social media Tuesday that he would be giving a free concert at the Williamsburg Regional Library theater this fall. Now, the library is saying the show, which was scheduled for Nov. 4, is canceled.

Driver pulled over for going 152 mph on Interstate 64

The Virginia State Police pulled over a Norfolk driver who was going 152 mph in a 55 mph zone over the weekend.

Ann McLean likened President Abraham Lincoln’s efforts in the Civil War to Russia invading Ukraine. She added that slavery would have eventually ended had the Confederacy remained a country.

Eyewitness: Burn victim set himself on fire in Virginia park

Kelseigh Meador, 30, of Salem said she and two others doused the flames on the man's body with bottled water, pond water and a fire extinguisher.

Nationwide, the CDC estimates there have been about 10 million flu illnesses and between 5,000 and 14,000 flu deaths this season.

Jacob Fracker's testimony against his colleague, who played a larger role in the insurrection, was cited by federal prosecutors. 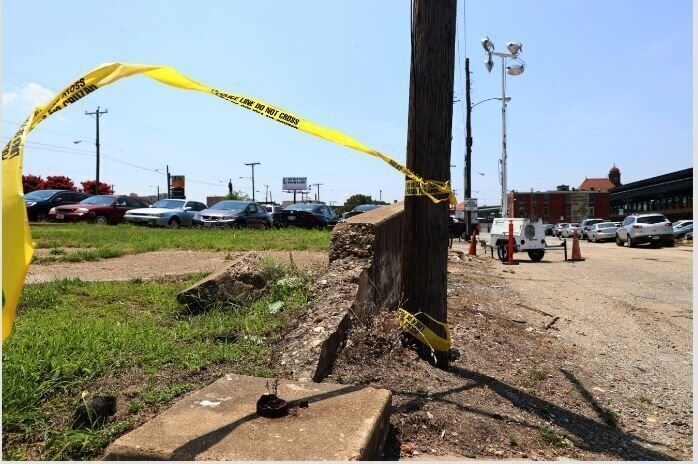 Crime scene tapes still hung on a pole at parking lots at East Broad and Crane streets in Richmond on Wednesday, July 7, 2021. D'Vonta McLaurin was killed and three other people were shot, including his father, early on the morning of Father's Day. The killing was one of 562 homicides recorded in Virginia in 2021, the highest total since 1994.

Richmond police Chief Gerald Smith talks about gun-related crimes during a press conference in October 2021. Data shows the number of murders and non-negligent manslaughter killings in the state soared to the highest level since 1994.