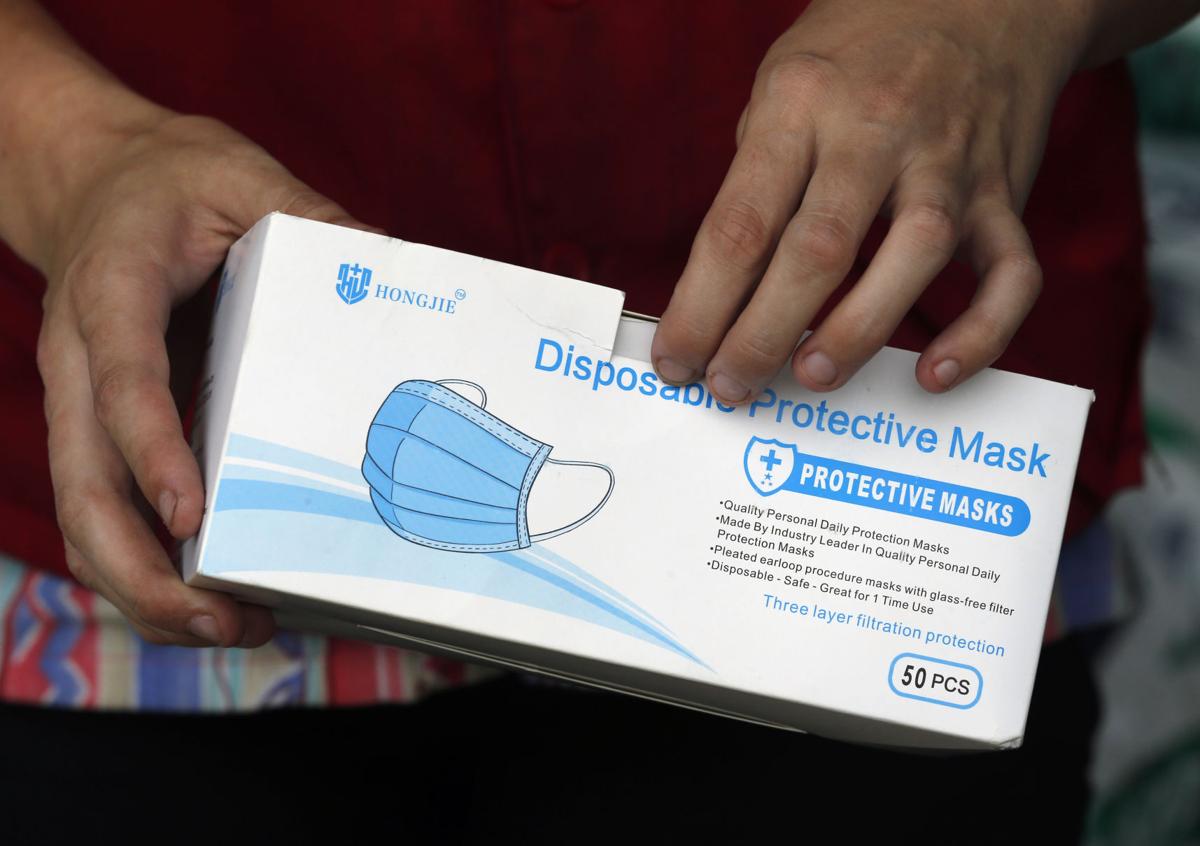 Disposable masks were handed out to patrons without face coverings at the ACE Hardware store in Ashland, VA talks Friday, May 29, 2020. 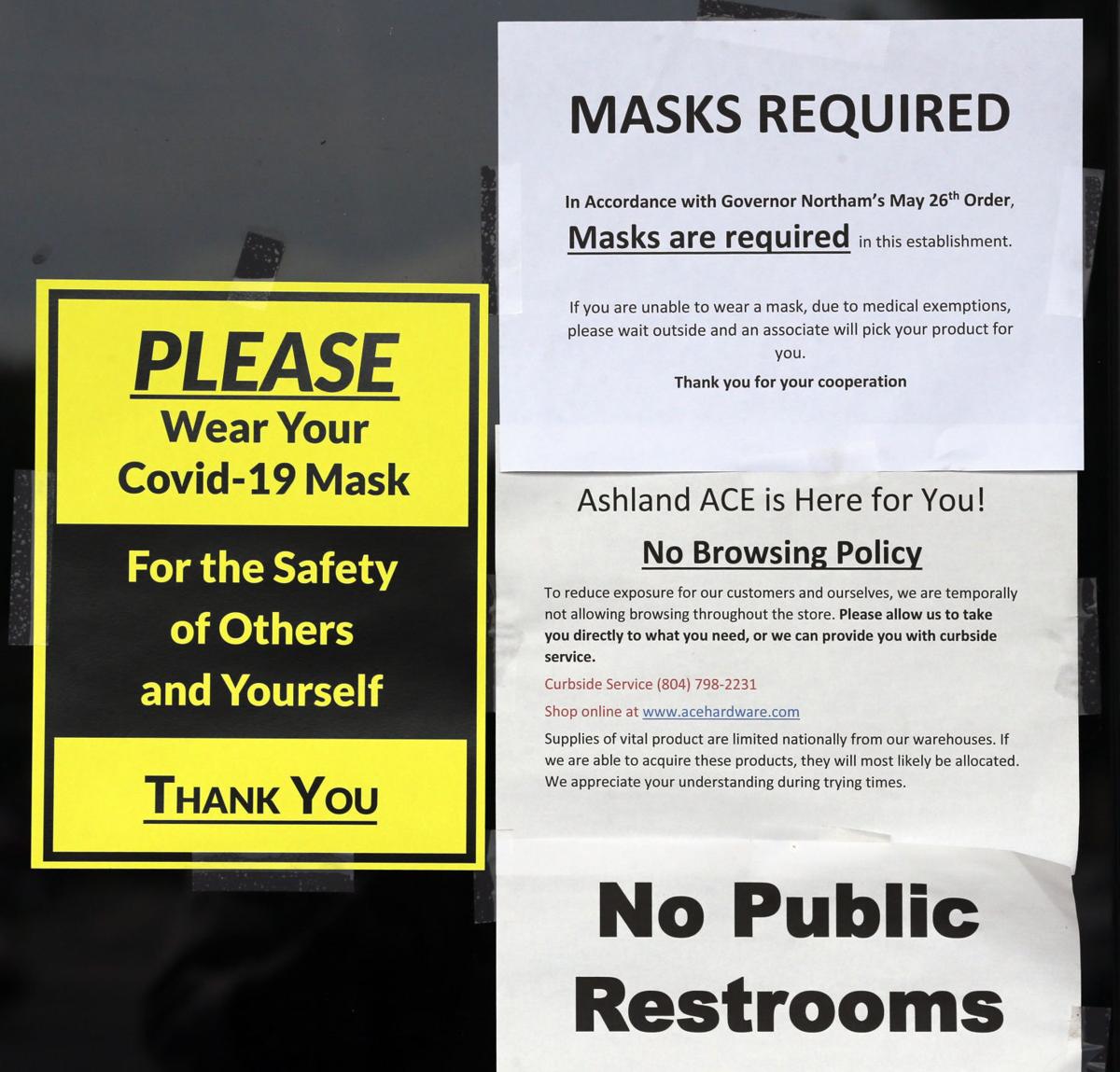 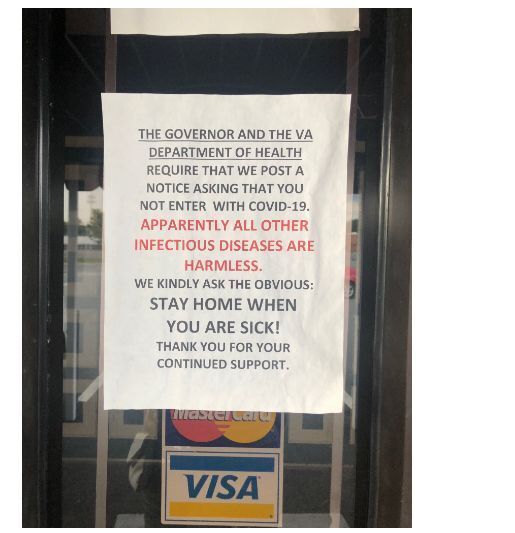 A sign on the door at Calabash Seafood in Mechanicsville. 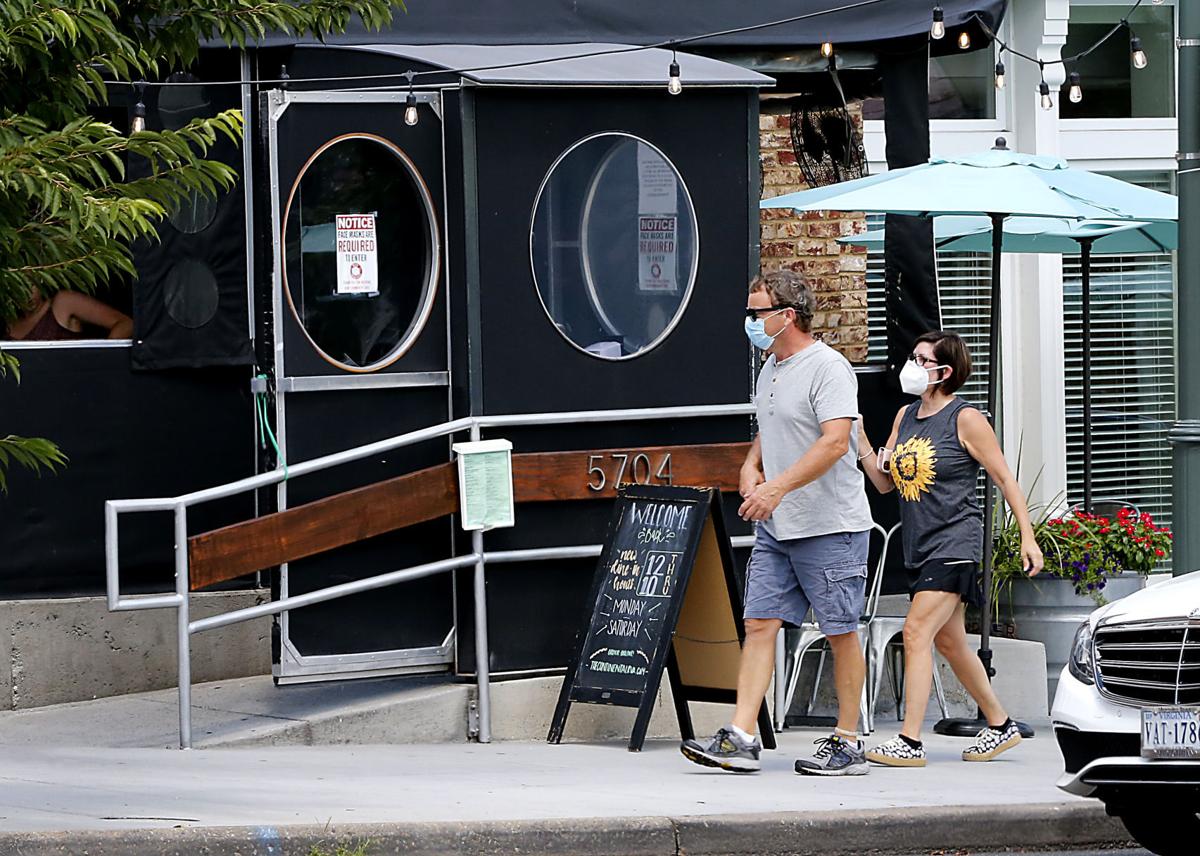 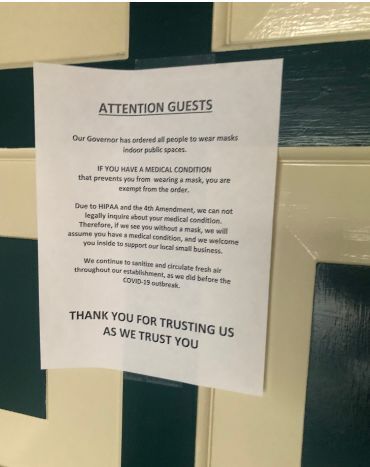 A sign posted up at Calabash Seafood in Mechanicsville. 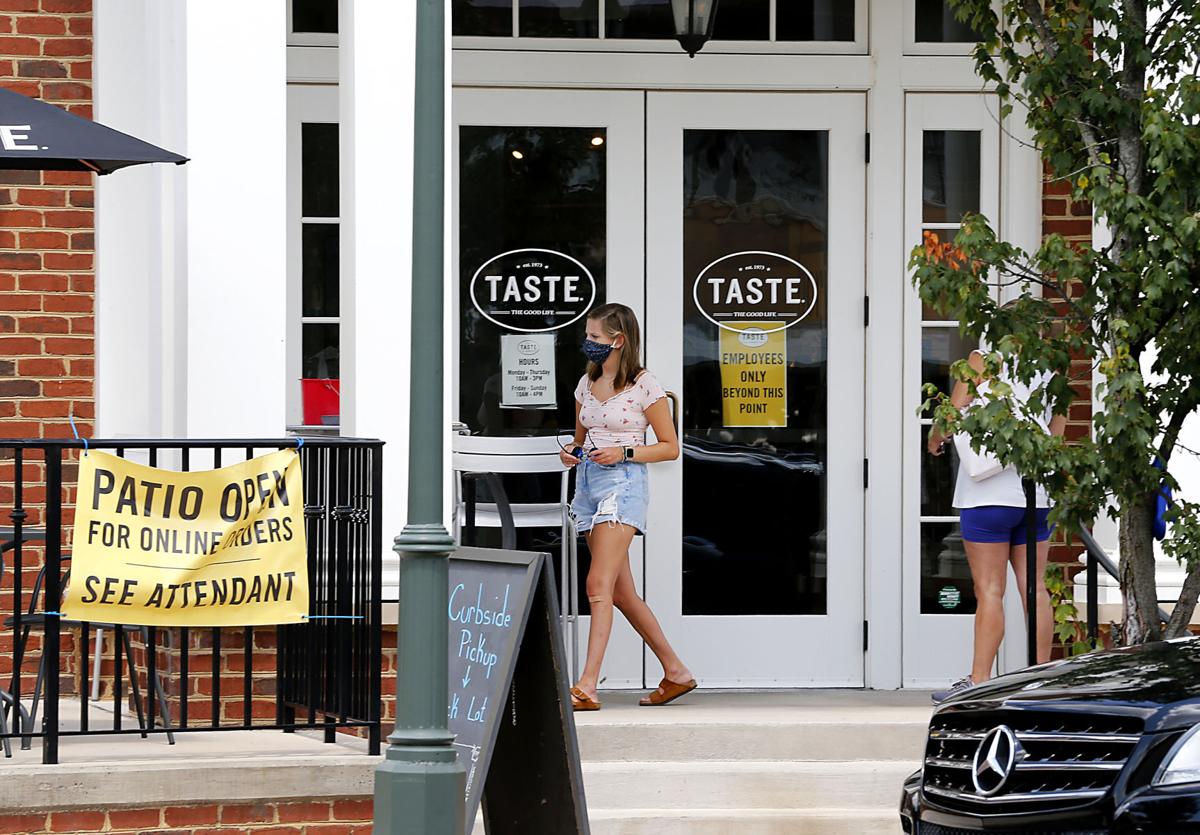 The agency is submitting a $6 million request to Northam's administration for the positions and travel and equipment costs, said Julie Henderson, director of VDH's Office of Environmental Health Services.

VDH’s 445-person environmental health team, which includes managers, supervisors and field staff, traditionally performs a broad range of public health enforcement and regulatory duties. Since the pandemic’s onset, however, the majority of the staff has shifted to virus-related work, said Henderson, who wants her staff to be able to resume duties ranging from issuing permits for private wells to inspecting migrant labor camps.

The barrage of complaints and confusion over enforcement -- one Mechanicsville restaurant that had its permit revoked over noncompliance has operated nearly two weeks without one -- has overwhelmed the staff.

“If we get this new staff … [they] will be solely tasked with enforcing the executive orders and educating the public and businesses on executive orders,” said Henderson, who hopes to submit the proposal to the governor’s office by the end of the week.

The $3.1 billion that Virginia received through the CARES Act, which are being used to hire contact tracers, workers who trace the spread of the virus and alert those who may have been infected, is referenced in the proposal as one possible source of funds. Northam's office did not reply to a question asking where funding for these positions could come from.

The new staff are planned to be full-time, contract workers whose contracts will last at least a year, with the possibility of an extension. They would be employed by VDH and assigned to a specific health district. Each of the state’s 35 districts would receive at least one dedicated specialist; some will get more depending on factors such as the concentration of cases in the district, Henderson said.

"Governor Northam is grateful that the vast majority of Virginians are following the guidelines and working together to stop the spread of COVID-19," Alena Yarmosky, a spokesperson for the governor, said in an email "Enforcement efforts at businesses are focused on making sure these establishments and their employees are following basic, commonsense rules to keep people safe."

Since late May, VDH has been fielding complaints via an online survey and a hotline, and aggregating the complaints into a centralized database. People can report any business that violates the restrictions outlined in Gov. Ralph Northam’s Executive Orders 63, which requires the use of face masks inside all businesses, and 67 and 68, which lay out standards for social distancing within different types of establishments. Most complaints VDH has received have related to facial coverings not being worn by employees or patrons, said Dr. Danny Avula, director of the Richmond City and Henrico County Health Departments.

A survey conducted by Richmond Times-Dispatch in May, before the governor issued his mask mandate, showed that around 50% of people entering stores in the Richmond area did not opt to wear masks. Of the 2,900 people reporters witnessed entering stores, 1,480 wore no facial covering and two dozen wore their masks incorrectly, letting it sit below their nose.

Some of the complaints VDH has received are clearly jokes, while others misunderstand Gov. Northam’s regulations, which only require customer-facing roles, not kitchen staff, to wear masks, Avula said. For every complaint that is deemed legitimate, health workers call the establishment and detail the complaint and next steps to the business owner.

The agency can suspend a restaurant's health permit, which establishments need to operate. Noncompliance with any of Northam's three orders also can result in a misdemeanor or an injunction, in which case VDH would seek assistance from a local commonwealth attorney.

“For the most part, businesses are trying to do what they need to do to comply. But there are a lot of rules and there’s a lot to read through, so we want to first come with the lens of being educators and supporters,” Avula says.

The only central Virginia business that has been penalized for not adhering to the governor's guidelines is Calabash Seafood, a restaurant in Mechanicsville that had its health permit suspended on Monday, July 27 due to a lack of mask usage and socially distanced tables, said Henderson. The restaurant has continued to operate since then.

Dennis Smith, the owner of Calabash Seafood, stated that while "we encourage people to wear masks," he does not believe that masks protect people from the coronavirus and feels the governor's executive orders were unjustified.

When asked to confirm that the business' health permit had been suspended, Smith said that VDH had only "tried to" suspend their permits. "They've got to give me due process. They thought they were going to, if I [had] agreed to it, but I didn't agree to it," he said. "Absolutely not."

Henderson clarified that VDH does, in fact, have the power to "summarily suspend restaurant permits due to an imminent health hazard. [Calabash Seafood] currently [does] not have a permit to operate. The due process is they can appeal the suspension." She says that VDH is currently deciding what the next steps are for dealing with this business, which has now been operating without a health permit for almost two weeks.

Additionally, several Hampton Roads businesses had their permits suspended two weekends ago due largely to a lack of social distancing and facial coverings.

Three complaints typically is the minimum number required to prompt an in-person visit to a restaurant, Avula said, but if an establishment seemed "resistant" to complying with COVID-19 regulations communicated during a phone call, enforcement activities could escalate. There's no statewide standard for when in-person visits are required.

As of August 5, around 20 businesses, mostly restaurants, had necessitated in-person visits in Richmond.

“Persistent noncompliance with the executive order,” such as inspectors seeing, over multiple visits, instances of staff or patrons not wearing masks, tables not being distanced by six feet or staff not enforcing mask-wearing, could lead to permits being suspended, says Avula.

The overwhelming number of COVID-19-related complaints has prompted other agencies, such as the Alcoholic Beverage Control Authority and Department of Agriculture and Consumer Services, to assist in responding, Henderson said.

The number of complaints being filed daily is trending downward. VDH received no more than 700 complaints each day for the past week; it received 1,633 complaints on July 16 – two days after a press conference in which Gov. Northam announced increased enforcement of the mask mandate and social distancing measures.

“I hope it’s the result of our work,” Henderson said.

Three dozen Virginians were temporarily or permanently barred from possessing firearms and/or had their guns confiscated during the first two months of the state's new "Red Flag" law, which prohibits residents from keeping or purchasing a gun if authorities can establish they would be a danger to themselves or others.

President Donald Trump is holding a rally in Virginia on Friday, his first formal campaign appearance this year in a state now favoring Joe Biden.

Warner says he takes nothing for granted; challenger Gade confident he can win

Public opinion polls suggest a comfortable advantage for Sen. Mark Warner, D-Va., in his bid for re-election this fall, but after a close call in 2014 that saw the incumbent barely eke out a victory, his GOP challenger this time, Daniel Gade, is confident he can prevail.

Former Gov. L. Douglas Wilder said Thursday that protesters and other Virginians must demand more of their leaders in order to redress systemic inequities in education, health care and housing.

Gov. Ralph Northam had his way Thursday in a House of Delegates committee that killed legislation that would have limited the duration of emergency orders by the state health commissioner and required the state to make long-term-care residents and employees the top priority for testing for COVID-19.

In a party-line vote, the Virginia House of Delegates’ Courts of Justice Committee effectively killed two Senate bills that would have required greater transparency of decisions made by the Virginia Parole Board, which has come under intense scrutiny in recent months for the controversial release of convicted killers.

Attorney General Mark Herring’s office is urging the state Supreme Court not to hear Kanye West’s appeal of his ouster from Virginia’s presidential ballot, saying it could wreak havoc with Friday’s scheduled start of absentee voting.

With few ads, appearances, is Virginia no longer a presidential battleground?

President Donald Trump proclaimed last year that Virginia would “come back HOME Republican in 2020!” — but less than two months from Election Day, the president’s path to re-election doesn’t appear to include the Old Dominion.

The death penalty has been used in the U.S. to enforce racial hierarchies since colonial times, according to a report released Tuesday by the Death Penalty Information Center.

Disposable masks were handed out to patrons without face coverings at the ACE Hardware store in Ashland, VA talks Friday, May 29, 2020.

A sign on the door at Calabash Seafood in Mechanicsville.

A sign posted up at Calabash Seafood in Mechanicsville.