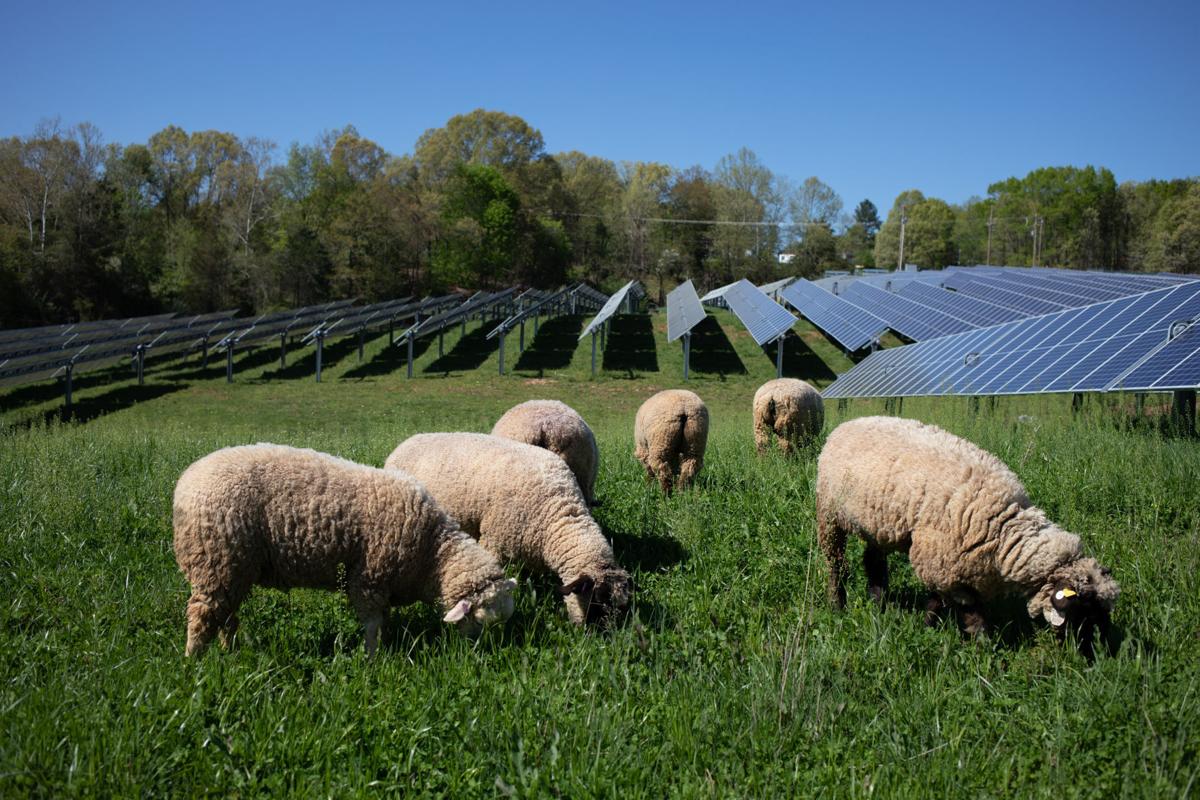 Sheep graze at the Bedford Solar Farm, helping to keep vegetation under control, on April 22. 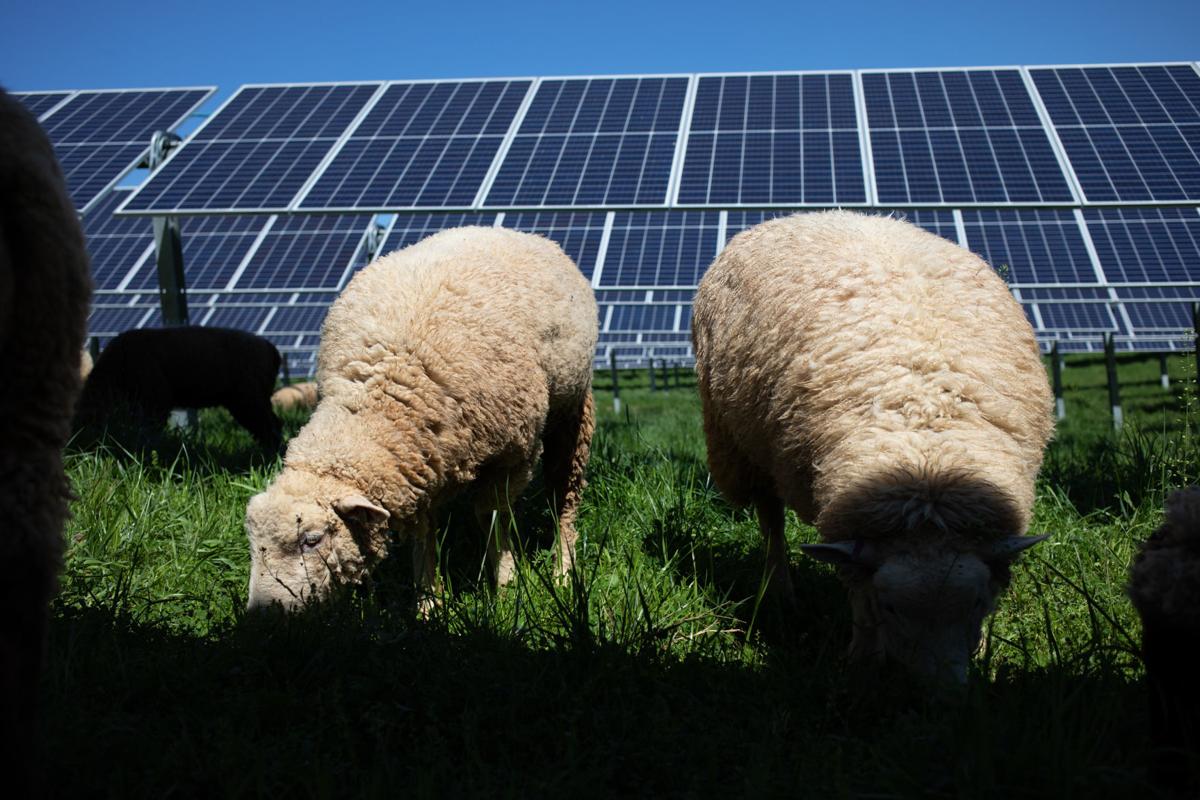 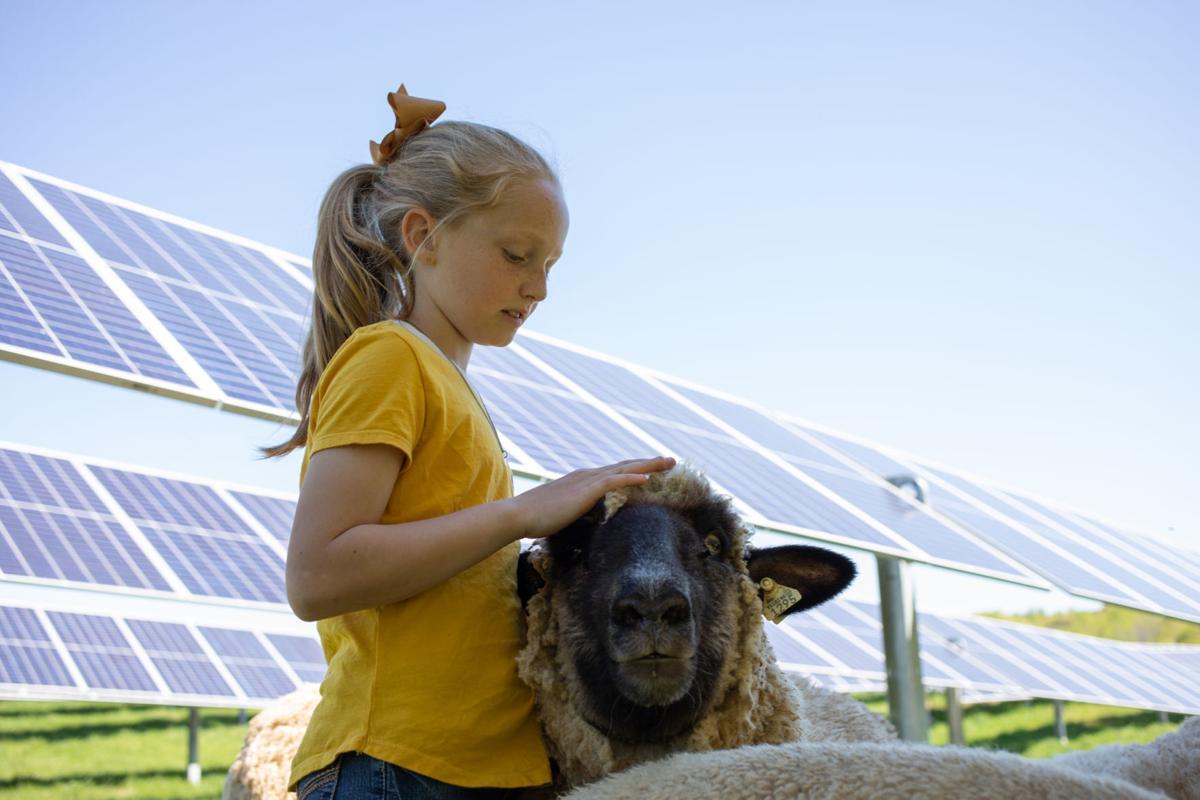 Norah Akenhead, 9, pets one of the sheep helping to control vegetation at the solar farm in Bedford on April 22. 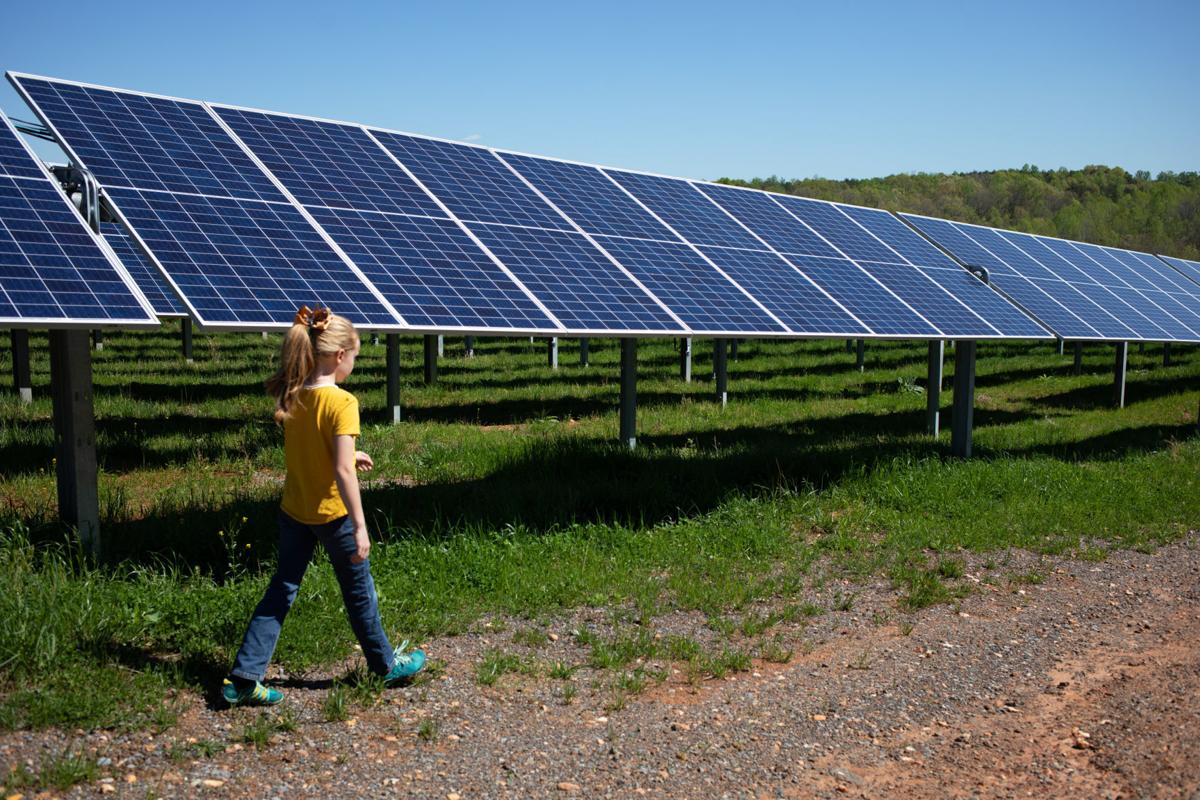 Norah Akenhead, 9, walks through the Bedford Solar Farm on April 22, 2019. Norah and her two sisters often will help care for the sheep on the site.

BEDFORD — Daisy May, Minnie, Ruby, Grinch, Rose, Jingle, Fancy, June and Grits. These are just a few of the names of the employees working at the Bedford Solar Farm down on Draper Road.

They are paid with water, shade and lots and lots of grass, which they have been hired to eat.

These employees, better known as sheep, live on the solar farm eight months of the year, and their only goal is to maintain the land by acting like living lawn mowers.

The Bedford Solar Farm came online in January 2018. Having the sheep on the land provides all-natural vegetation, which allows the facility to operate more efficiently, said John Wagner, the town’s electric department director.

“They alleviate the need for a conventional vegetation maintenance program, which is very costly,” he said. “The program speaks to Bedford’s willingness to try innovative solutions to everyday problems and our commitment to the long-term viability of renewable energy.”

Wagner said he doesn’t think many residents in the town know about the role the sheep play on the 20-acre farm.

“The sheep are a great fit with our renewable energy program and we look forward to adding another project soon,” he said.

The solar farm was developed by North Carolina-based firm O2 emc to create solar energy as a source of renewable energy for the town.

Kelly Hendley, project development manager at O2 emc, LLC, said the use of the sheep reduces the need for lawn mowers, pesticides and other harmful agents while reducing maintenance costs and creating economic benefits for local farmers.

“It’s really a win for all parties involved,” she said.

The presence of sheep on the farm pairs renewable energy with agriculture, said Liz Akenhead, who has a yearly, renewable contract with O2 emc to bring in her own sheep to help maintain the farm.

“It’s a productive use of the land. Instead of just harvesting solar energy, you can turn it into sheep grazing and promote agricultural use of the land,” she said.

Akenhead and her three daughters — Lauryl, 15, Samantha, 12, and Norah, 9, make sure the weeds aren’t growing up through the panels and keep the grass at the correct height. And if the sheep need a little extra help, the Akenheads will come in behind them and cut the grass with weed whackers or hand trimmers. Akenhead also maintains the perimeter around the fences to make sure there is no extra growth.

In the middle of April, there were about 18 sheep on the farm. But going into the hotter months of summer, there will be around 40 on the grounds as the grass grows more quickly.

“They never stop eating,” Liz Akenhead said. “Last year, we only had to step in one time to mow.”

The sheep get along fairly well. They’re friends, the Akenhead girls said.

“They’re so gentle and sweet. A little shy but most are cuddly,” Liz Akenhead said.

Underneath each row of panels is a solid row of shade, providing what Akenhead said is better than the pastures back home. The grass grows better under the panels, she said, because of the locked-in moisture it receives and because the solar panels block evaporation.

“The breeze feels good. They are so comfortable here,” she said. “When it rains they always have shelter against the panels, which blocks them from the rain and wind.”

The biggest maintenance challenge of the farm that the sheep can’t handle is stick weeds, which they will never eat, Akenhead said.

This requires her to come out and hand-cut all those weeds to make sure they don’t shade the panels.

The fence is buried two feet deep, and barbed wire lines the top to keep the sheep in and anything else out.

This year, Akenhead plans to install two outdoor cameras so she can keep an eye on things when she isn’t on the farm.

The Town of Bedford provides public water, not well water, to the sheep, which is kept in the center of the field in buckets. Other than that and the grass, sheep are low maintenance and require very little, Akenhead said.

Akenhead and her three daughters visit the farm just about every day checking on the sheep, their health and the status of the land.

When it looks like the sheep have covered one section, she uses rotational grazing methods with electric fences once a week to guide the sheep to another section.

All the sheep are female except for one pet male. The oldest is around 6 years old; the youngest is 1 year old. Some are show sheep, while others are just routine farm sheep.

They will stay on the farm until December, when they will return back to the Akenheads’ home at their farm in town.

When the project began, Akenhead said she had about 20 sheep, but that number has increased to 100 sheep.

“We had to upgrade our sheep; we needed more,” she said. “We sold our cows because it’s hard to do multiple things well. Once we realized this is what we’re going to do, we’re committed to this and we’re going to do it well.”

Liz Akenhead said it gives her daughters a big sense of pride and that they enjoy having a job to do.

“I like anything agriculture. All of it is fun. I’d rather be out here checking sheep than inside watching TV, so none of it is a chore,” Lauryl Akenhead said.

Report: Returning Syrian refugees at risk of abuse from government

These cool fins act as feet for this grumpy sea toad

These cool fins act as feet for this grumpy sea toad

Where Taliban and ex-soldiers face their wounds

Where Taliban and ex-soldiers face their wounds

Sheep live on a solar farm in Bedford, maintaining the land by acting like living lawn mowers. The Bedford Solar Farm came online in January 2…

Sheep graze at the Bedford Solar Farm, helping to keep vegetation under control, on April 22.

Norah Akenhead, 9, pets one of the sheep helping to control vegetation at the solar farm in Bedford on April 22.

Norah Akenhead, 9, walks through the Bedford Solar Farm on April 22, 2019. Norah and her two sisters often will help care for the sheep on the site.