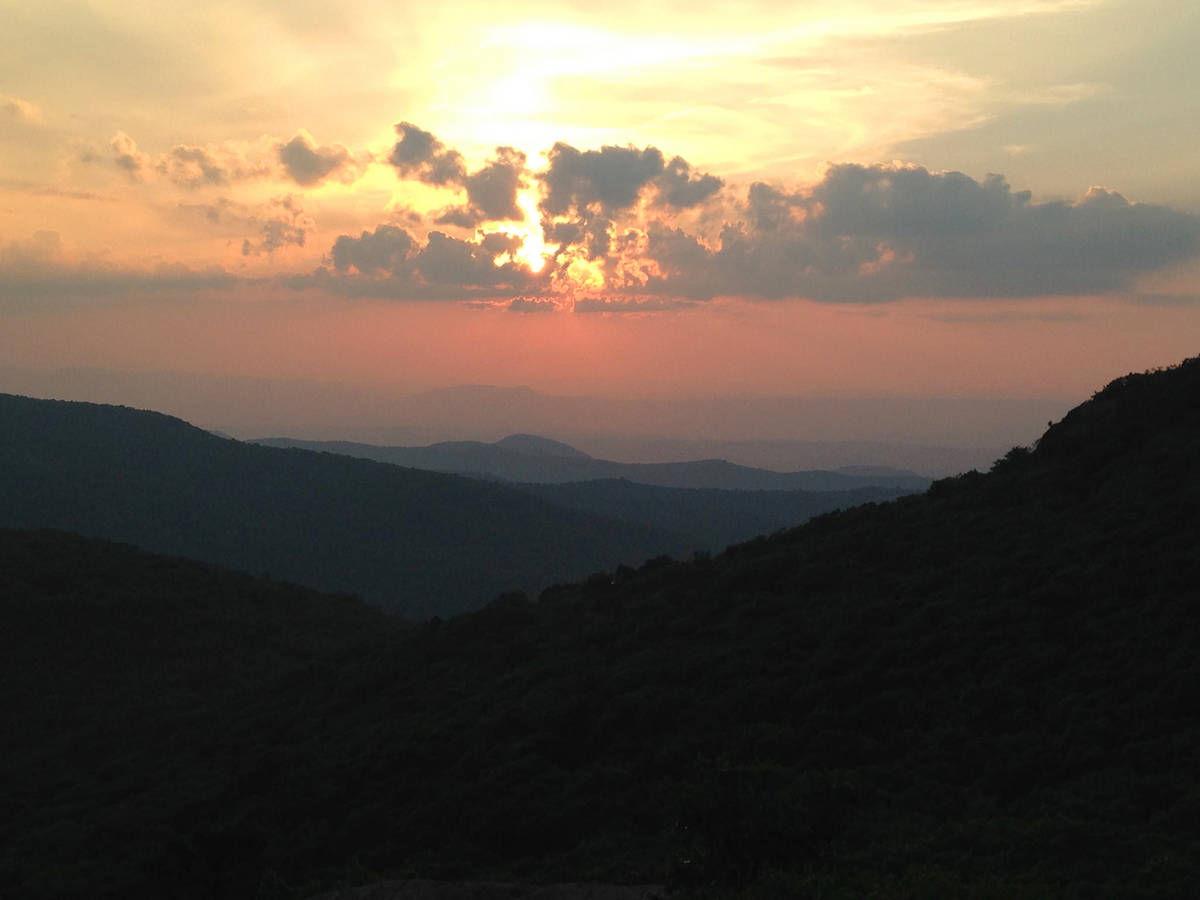 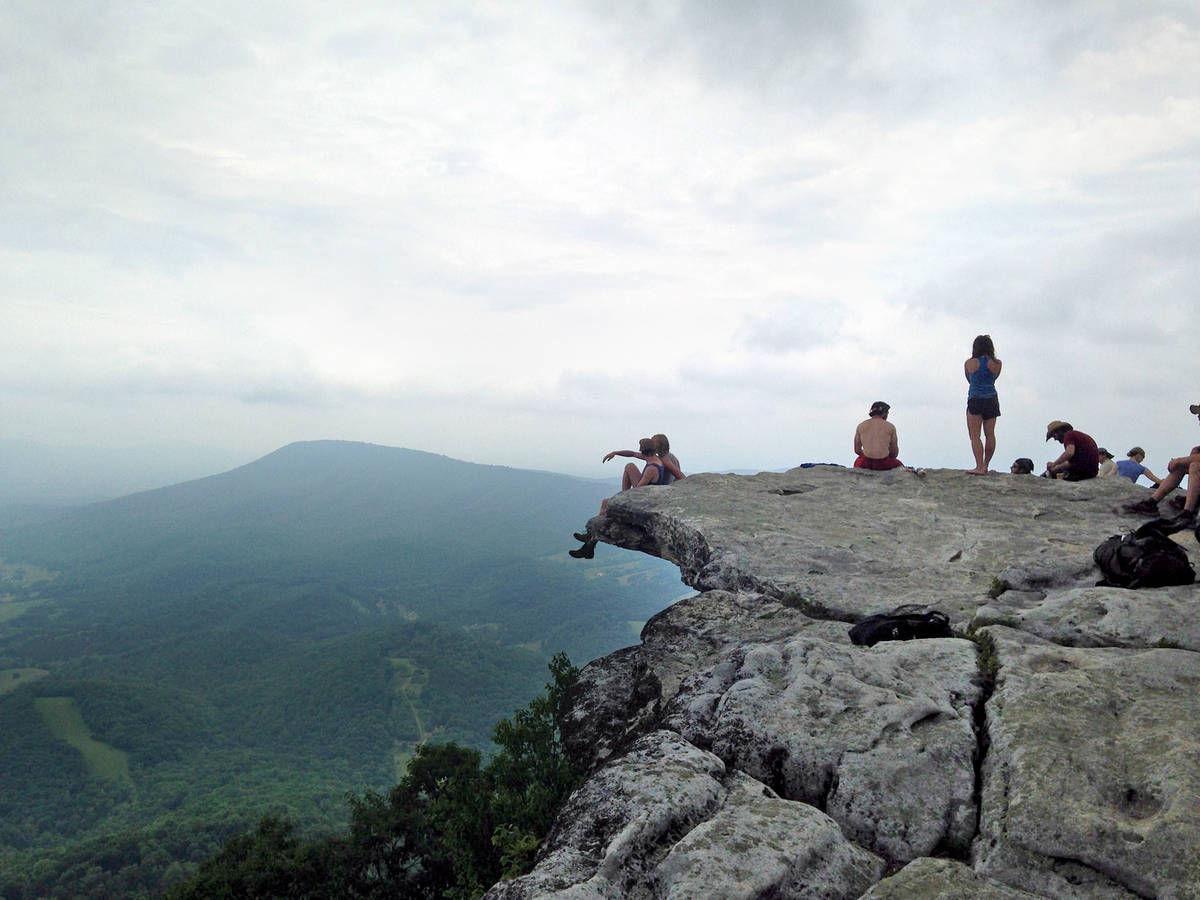 Recreationists enjoy the view at McAfee’s Knob in Roanoke on the Appalachian Trail. 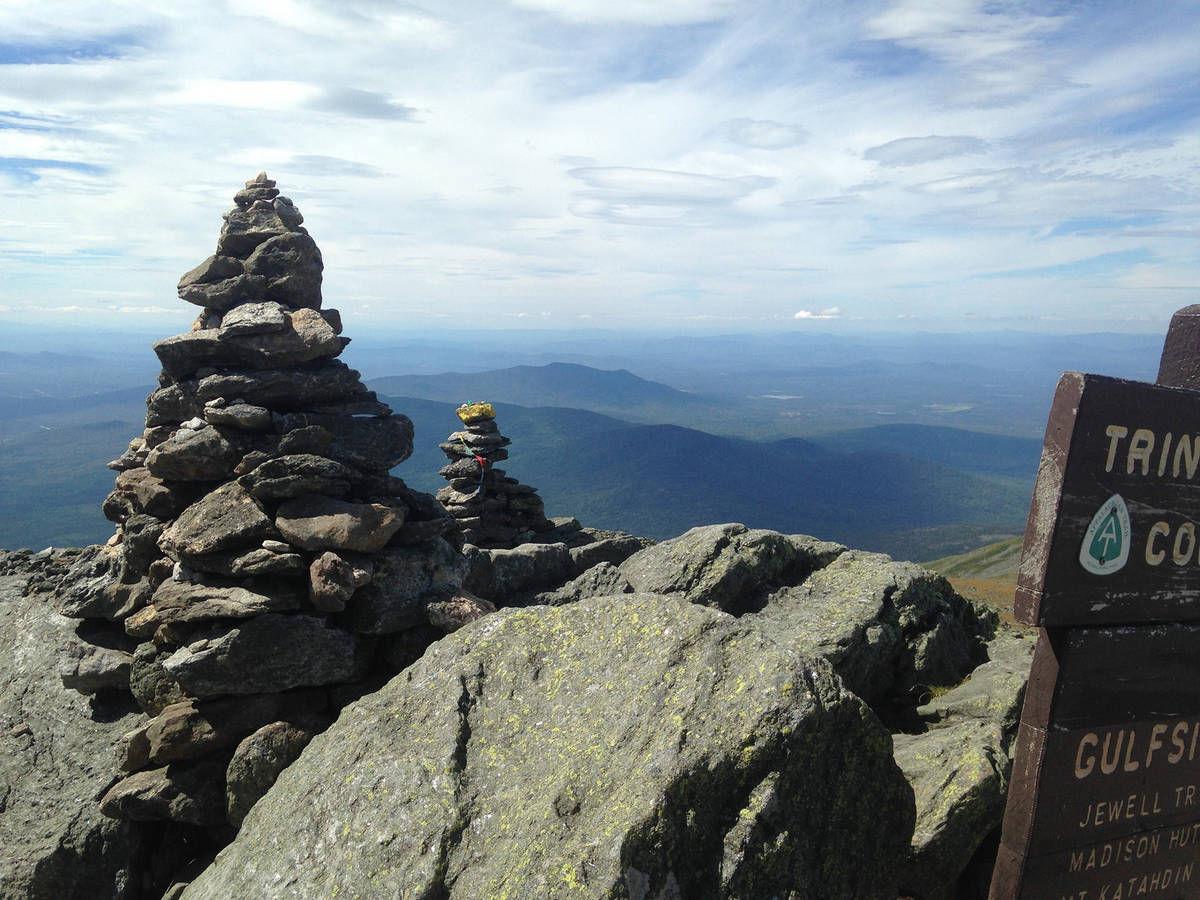 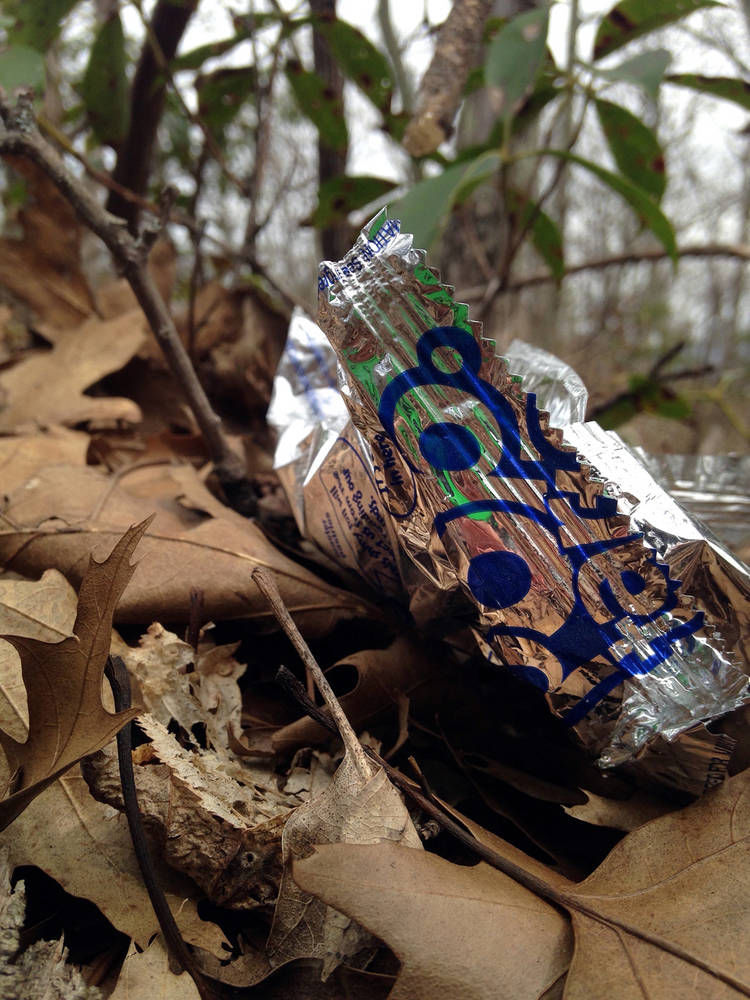 A Pop-tart wrapper and other trash has been left at a Shenandoah campsite. 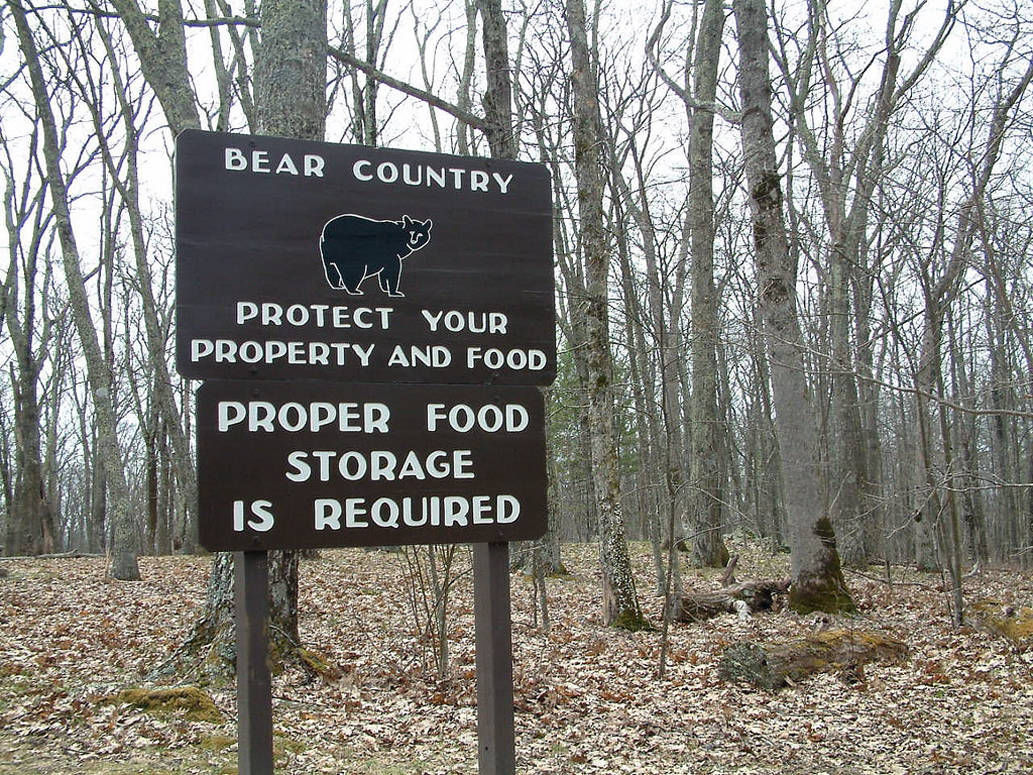 Signs at White Oak Canyon remind campers of the presence of bears and the importance of properly storing food.

When Richard Gehring began hiking the Appalachian Trail in April 2010, he did so with memories of hikes decades earlier, when the AT was relatively unknown. Back in summer 1976, he had set out on a southbound thru-hike, starting in Baxter State Park in Maine, hoping to make it to Springer Mountain in Georgia.

In the first 100 miles, between Baxter and Monson, Maine, Gehring recalled, he encountered just seven other hikers.

While Gehring didn’t finish his thru-hike as intended in 1976, he came back for several years, completing different sections of the AT until he had hiked the equivalent of the entire length of the trail in May 1981.

In 2010, Gehring decided to give a thru-hike another go. He was struck by how much use of the trail had increased since his first trek 30 years earlier.

“Down south, the shelters were almost always full, the privies overflowing, and many of the hostels were full,” he said. “If you ask a hiker today, the only reality they may know is the trail they are experiencing today. So, to them, the trail may not seem overcrowded.”

For decades, the Appalachian Trail has offered escape, capturing the imagination of generations of Americans looking to spend more time in the outdoors, building a relationship with nature or challenging their endurance. But as more and more people have looked to the promise of the AT for freedom, some have developed concerns about the trail’s sustainability.

Those concerns have captured the attention of hikers and trail authorities alike. In 2014, a recreational ecologist from Virginia Tech launched a comprehensive study of the trail. Jeff Marion’s multiyear project aims to analyze sections of the trail for signs of erosion using Geographic Information Systems technology.

A hiker himself, Marion believes his study will serve to help manage the trail and preserve an “unfettered wilderness experience” into the future. But based on his findings, Marion fears that the need for increased regulation is inevitable.

“The AT community is very, very concerned about not overregulating the Appalachian Trail. ... We are bound and determined to preserve that in any way we can,” Marion said. “But professional recreational ecology suggests that if the use keeps continuing to grow, at some point we are going to have to cross that bridge—to limit use and employ regulations in some cases.”

Equipped with GPS systems, Marion led a team through the northern third of the trail last year. He sampled sections of the AT from Connecticut to Maine. The team plans to research the southern third this year and the middle third next year. Marion and his team intend to publish their results in 2018.

Marion shared some of his results from the northern third.

This steep design, he said, exacerbates erosion from both water runoff and soil displacement as hikers walk.

This problem, and others caused by hikers, have become prominent recently in Baxter State Park, the AT’s northern terminus. The park’s director, Jensen Bissell, said the presence of too many hikers has, at times, negatively impacted the trail.

“In Baxter, we have a pretty good record of enforcement of those who violate park rules. And the reason we try to mitigate or enforce punitive actions against that is that, in general, all those things have a negative effect on visitor experience, and, to some degree, the resources of the park itself,” Bissell said.

He said one of the worst problems he and his staff face is hikers congregating in large groups to summit the trail’s final mountain, Mount Katahdin.

“When large groups of AT hikers bottle up waiting to complete their hike ... we find we might have 25 or 30 AT hikers hiking together, walking outside the trail corridor in a very sensitive habitat, like the top of Katahdin,” he said.

Leave No Trace, a nonprofit organization that educates people about their recreational impact on nature, wrote on its website that hiking off trail can trample “vegetation or communities of organisms” beyond recovery.

As a result, Baxter State Park enforces a long list of rules. Bissell explained why in a 2014 letter to the Appalachian Trail Conservancy, whose volunteers and clubs protect and maintain the trail.

Bissell cited various problems in the park: Besides traveling in large groups, hikers were camping in undesignated areas, hiking with pets, drinking and using recreational drugs and littering.

Kevin Seagraves, information coordinator for Leave No Trace, said these behaviors are harmful to the environment.

Bissell said the AT cannot accommodate an unlimited number of hikers.

“We very clearly see the trends in growth here, and going from 300 hikers a year to 1,700—over 2,000 if we count all the hikers—is a big change,” he said. “And we don’t see any evidence in the line of that curve for that growth to stop. And we don’t see anything in the Appalachian Trail Conservancy’s policy to suggest it should. So that’s the conundrum we’re trying to work out.”

In his letter, Bissell said the conservancy’s model is “based on unlimited growth in use.”

By comparison, he said, Baxter State Park has a “discrete cap model.” This means the park puts a limit on the number of campsites and parking spaces available each day in order to restrict the number of visitors. Bissell said the limited growth model has a positive impact on the environment in the park and on visitors’ experiences.

Formally, the Appalachian Trail has no such limit on the number of users.

Jay Dement is the information and education director for the Georgia Appalachian Trail Conservancy, which helps maintain another highly used section of trail. He said the “three crucial elements to preventing environmental degradation are education, education and education.”

Dement said compiling and predicting the number of hikers is hard because hikers can get on or off the trail in so many places and they don’t need a permit.

However, as of April 5, he said, 1,300 thru-hikers and 800 section hikers had registered this year in trail logs at Amicalola Falls State Park in Georgia, the closest park to the trail’s southern terminus.

Dement predicted that at least 3,000 hikers total would begin thru-hikes in Georgia this year.

“In such great numbers, it’s hard to not have a major impact,” Dement said. “We see them all over the trail, being ill-prepared both with what they’re carrying and their habits: not knowing privies aren’t for trash, not realizing that camping over there in that bed of flowers is not a good idea. ... Somebody has got to tell them what to do.”

He believes limiting hikers’ access to trails is not the answer. Instead, he recommends “alternative thru-hikes” like flip-flops and section hikes, as Gehring did from 1976–81.

Dement also wants the Appalachian Trail Conservancy to recognize alternative trails that parallel the AT as part of a thru-hike. This would spread out the hikers.

“You can’t eliminate a problem by eliminating the access,” Dement said. “If people understood what the problems were, and shown that there were other places where they could go to recreate, then we could all live a whole lot better.”

Marion agrees with Dement that education is essential for reducing harmful impact on the trail.

He also advocates for voluntary programs that have been instituted for particularly high-use areas such as Springer Mountain in Georgia and the Presidential Range in the White Mountains of New Hampshire.

'TRY EVERYTHING ELSE FIRST'

Hawk Metheny, the conservancy’s regional director for New England, agreed that following Leave No Trace ethics and avoiding popular hiking areas during peak times does much to limit impact. But he fears that ultimately, limits on hiker numbers may be needed.

He said the Appalachian Trail Conservancy’s recent efforts to formalize data collection on hikers may yield a better understanding of the trail’s limit.

“We’ve hired a visitor use program manager to apply more study and science to the popular sections to better determine the limits of acceptable change and the carrying capacity of the trail comprehensively,” Metheny said. “We want to get better science to work with land management groups to inform on whether we need to introduce quotas, permits or changes otherwise in regulation.”

It will be up to land management groups—not the Appalachian Trail Conservancy—to decide whether to implement such regulations, Metheny emphasized.

Despite planning for the worst, Metheny seemed optimistic about efforts to deal with overuse problems by other means: “Before we implement limits like these, we’re going to try everything else first. But we haven’t crossed that threshold yet.”

Marion agreed. While he believes growing use of the AT might prompt more regulation, Marion is optimistic that his study will help the Appalachian Trail Conservancy, its trail clubs and the National Park Service improve conditions along the trail.

“It’s just that at some point with the sheer number of people, even if they are practicing Leave No Trace, we’re still going to end up with problems,” Marion said. “The voluntary efforts and Leave No Trace is helping, but ultimately it won’t be enough.”

DAMASCUS — Sixty-five years ago, Gene Espy hiked the Appalachian Trail from beginning to end, becoming only the second person documented as ha…

Recreationists enjoy the view at McAfee’s Knob in Roanoke on the Appalachian Trail.

A Pop-tart wrapper and other trash has been left at a Shenandoah campsite.

Signs at White Oak Canyon remind campers of the presence of bears and the importance of properly storing food.