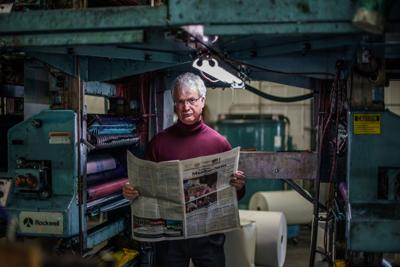 Local journalism is a cornerstone of democracy and a vital source of information for communities across the country. Newsrooms cover local politics, high school sports, local business openings, cultural events and other matters that help a community remain vibrant and connected.

But the industry is facing an existential crisis because of the unyielding power of Big Tech platforms such as Google and Facebook.

With less than four weeks left in this Congress, now is the time for the Senate to pass the Journalism Competition and Preservation Act (JCPA). The JCPA (S. 673 and H.R. 1735) was favorably reported out of committee on Sept. 22 with strong bipartisan support and now must head to the floor for a vote. The JCPA will hold tech giants accountable and provide a necessary lifeline for local papers, requiring Big Tech to compensate small and local outlets for the use of their content.

Big Tech benefits tremendously from journalism content, yet it refuses to pay local publishers fairly for the journalistic content that fuels their platforms. As a result, local papers are being replaced by tech platforms using black box algorithms designed to keep users inside their walled gardens -- all while charging exorbitant ad fees -- up to 70% of every advertising dollar.

Since 2000, U.S. newspaper circulation has dropped by half, with 31 million fewer copies in circulation in 2020. The vast majority of U.S. counties with no regular newspaper -- "news deserts" -- are in rural areas. Despite record audiences, since news outlets transitioned to digital, revenue has drastically declined.

The tech giants have built their empires by profiting off the hard work of journalists without fairly compensating them. And as local publications struggle to stay afloat, Big Tech has only doubled down on its anticompetitive practices, further consolidating its control over the flow of information.

This is fundamentally unfair, and the JCPA will bring about much-needed change.

The JCPA will benefit small and local publishers exclusively and impose severe penalties if the tech platforms do not negotiate with them in good faith. The bill has a limited scope of six years to address a broken marketplace, while the broader competitive landscape is fixed through other legislation and the courts.

The JCPA also incentivizes publishers to hire more journalists and protects our constitutional freedoms of speech and the press. The bill’s scope is limited to compensation and does not allow for negotiations around ranking or display -- it serves only to ensure fair compensation for local news outlets. The JCPA has strict transparency requirements on the terms of each agreement reached between tech platforms and journalism providers and establishes clarity in how news outlets spend the funds they receive.

News publishers around the world are being compensated by Big Tech. Australia passed a similar policy to the JCPA, the News Media Bargaining Code, for media organizations there to bargain for payment. That has produced significant revenue (billions of dollars, if translated to the U.S. market) for hundreds of publications of all sizes. One Sydney journalism professor noted that she hadn’t seen her industry so financially robust in decades.

There are so many open positions for reporters, they cannot all be filled, a signal of the improved economic health of the industry. The swift and clear successes of the Australian Code -- and efforts in other countries such as Canada, the UK, European Union and more -- should serve to encourage the passage of the JCPA in the United States.

Thousands of hometown papers from across the political spectrum, as well as both Democrats and Republicans in Congress, support the JCPA. Moreover, in these highly polarized times, polling data found that 70% of Americans support the JCPA. The JCPA has such broad support because, ultimately, it is about basic fairness.

Local papers cannot afford to endure several more years of Big Tech’s use and abuse, and time to take action is dwindling. If Congress does not act soon, we risk allowing social media to become America’s de facto local newspaper. The Senate must advance the JCPA to the Senate floor for a vote before the end of the year to rein in Big Tech and restore fairness to local journalism -- one of the most important checks and balances we have against corporate power and government corruption -- before it’s too late.

Nov. 20 was Joe Biden's 80th birthday. Our first octogenarian president is two years older than Ronald Reagan was when his presidency ended in 1989.