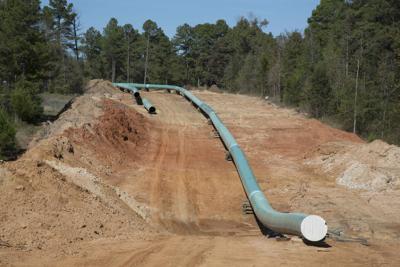 IF YOU wonder why we can’t get anything done in this country, just consider the history of the Keystone Pipeline.

When the project was proposed in 2008, President Barack Obama, a Democrat, was completely against it and shut the effort down.

When Donald Trump, a Republican, became president in 2017, he revived the project.

Now President Joe Biden, another Democrat, has shut the pipeline project down again.

How can America possibly get anywhere under such conditions? You take a step forward under one president and a step back under the next.

In his inaugural address, Biden assured us that one of his desires is to return unity to the American people. That same afternoon, he began signing executive orders at a furious pace and seems determined to remake America in 10 days.

Shutting down the Keystone Pipeline project was one of his first orders.

Whether or not that decision comes back to bite America is yet to be determined. But in a country that runs on oil, we don’t want to be at the mercy of foreign nations for crude.

Most of those against the pipeline are too young to remember the oil crises of the 1970s. Five-gallon limits. Odd–even day purchases. Out-of-gas signs. Following tanker trucks for miles to sit in a half-mile long line to get five gallons. It wasn’t pretty.

Could we see that again? You better believe it. And those who drive these huge new pickups down the highways are going to be in trouble if we do.

Are we headed for $4-a-gallon gas? Many are claiming that we are. The hysteria has already begun. Personally I don’t think shutting down the Keystone Pipeline will cause a dramatic increase in gas prices but the pipeline’s advantages outweigh its disadvantages and Biden should have seen that.

What bothers me is that every president wants to reverse the actions of his predecessor the minute he assumes office. As with congressmen, it is all about the party. Politicians are long past caring about the general public as a whole.

Perhaps I am unique, but I can think for myself. There isn’t a day that goes by that I don’t tell some Democrat or some Republican he or she is crazy because that person just parrots party propaganda. All I have to do is tell them to put the evidence right here in my hand and these people walk away mumbling because they can’t.

Did Biden think for himself before he reversed direction on the Keystone Pipeline or did he do it just because the last Democrat president, under whom he served, was against it?

I applaud Biden’s decisions to rejoin the World Health Organization and to call a world conference on climate change because, for whatever reason, the climate is changing. The atmosphere is getting warmer and the storms are getting bigger, as evidenced by the one in California earlier this week. But I’m not convinced Biden is right on all of his energy policies.

Maybe one day in the future we all will be driving electric cars, but not anytime soon. Until then, we will need oil to run our internal combustion engines, for transportation and for commerce. Our economy depends on it.

And I’m not convinced that Biden should have spent the first 10 days of his presidency signing executive orders trying to undo everything the Trump administration did.

Biden the Democrat is doing exactly what Trump the Republican did. He’s shoving everything his party wants down America’s throat. That’s not how you bring the country together.

So slow down, Joe. Take your time. Be a little more diplomatic. You catch more flies with sugar that you do with vinegar.

I gave Trump a chance and he let me down. I’m hoping you won’t.

The other party also has a point of view and often it is right. Work both sides of the aisle.

Remember, you’ll never bring this country together by trying to erase everything your predecessor did. Trump found that out.

Oh, and all those Democrats who complained about Trump issuing executive orders are strangely quiet now.

Take your foot off the gas, Joe.

Richard Kyte: Kindness is too often a neglected virtue

Opinion: I have never met a kind person I disliked, even if I disagreed with their politics or we had no interests in common.

Revisiting reparations: Is it time for the US to pay its debt for the legacy of slavery?

The Ethical Life podcast: Are we moving too fast on marijuana legalization?

Episode 7: Other topics include whether news stories about relatively minor crimes should stay online forever, and which tactics work best when dealing with unreasonable people.

Motivation is a key factor in whether students cheat