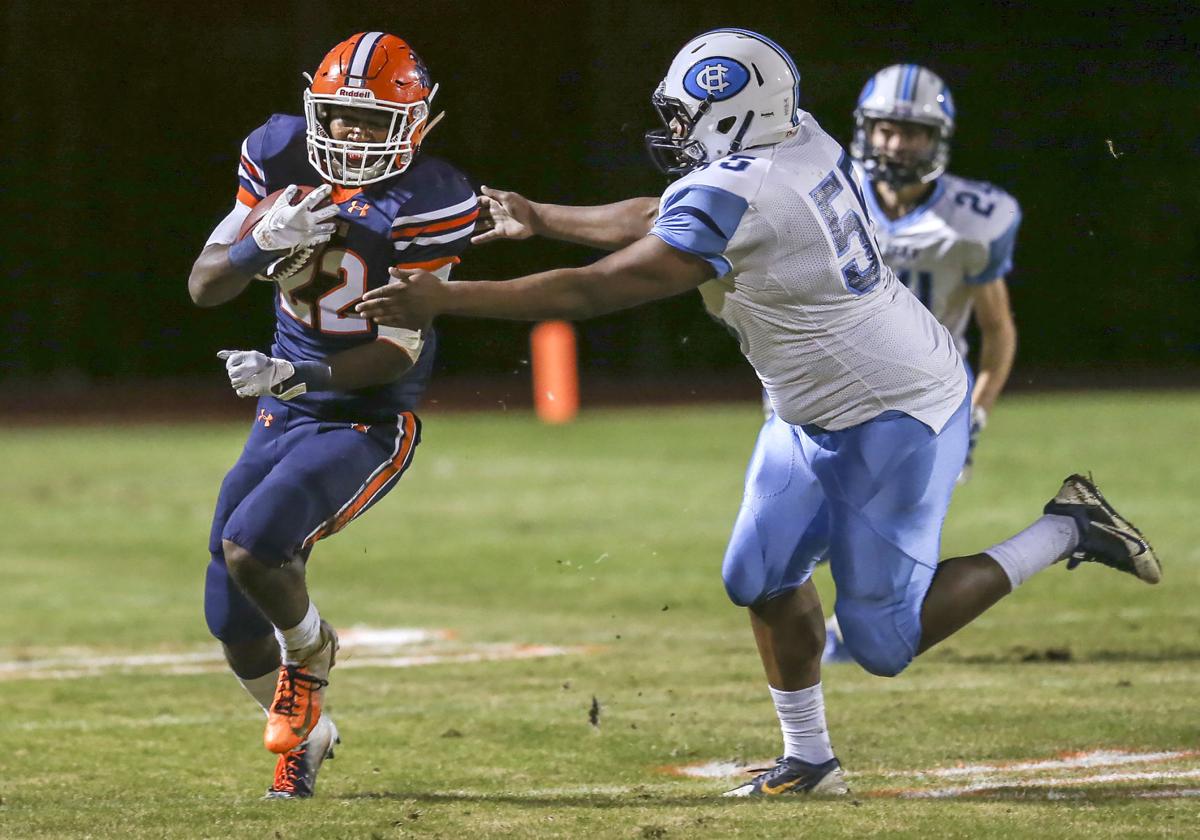 North Stafford’s Devyn Ford (left) skirts a Halifax defender while returning a punt for a score during a 2018 playoff game. 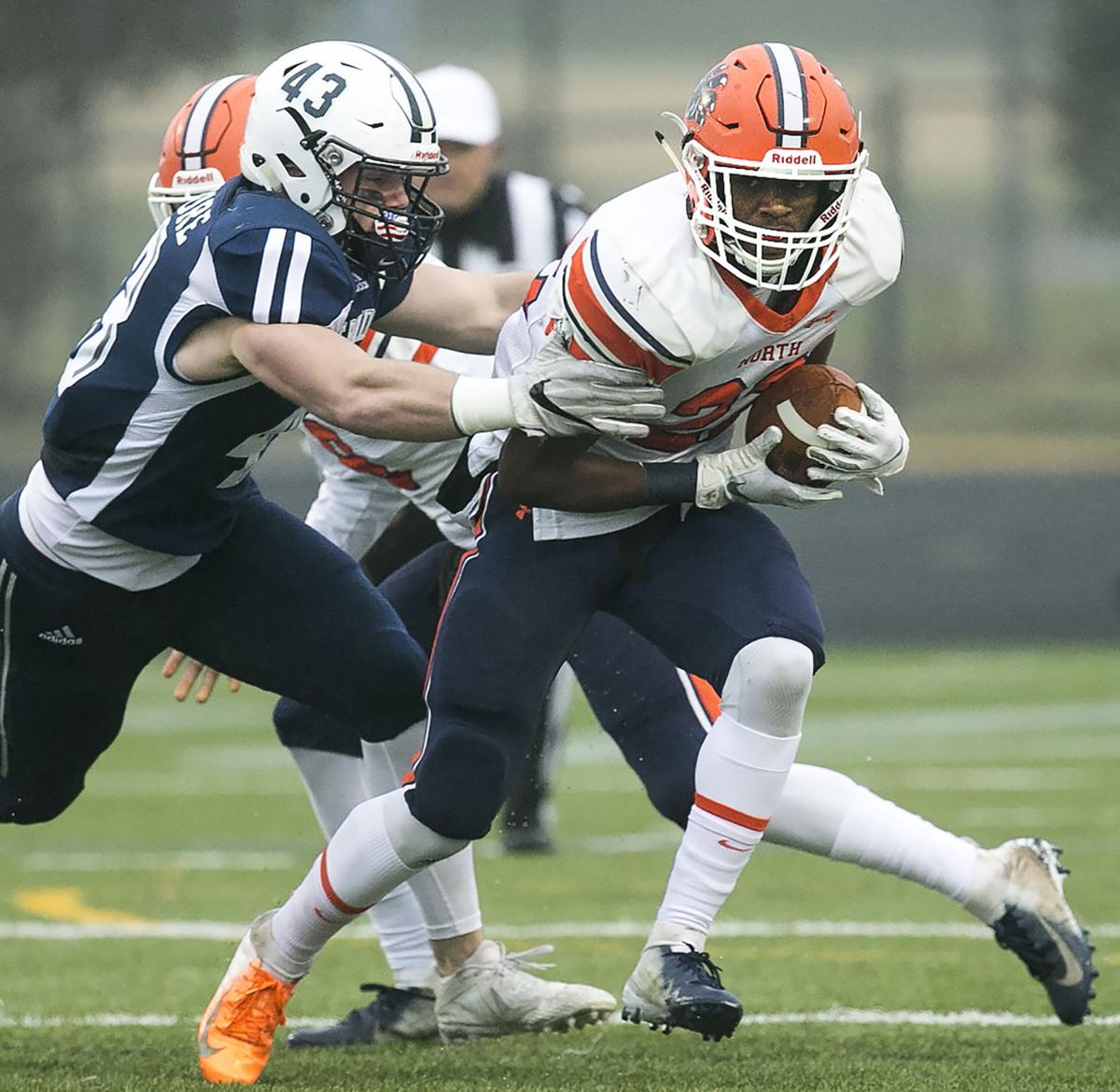 North Stafford’s Devyn Ford outruns a Stone Bridge defender during the Class 5 state football semifinal in 2018. Ford is the Free Lance–Star’s player of the decade.

When Devyn Ford was a rising freshman at North Stafford High School, Wolverines football coach Joe Mangano invited him to train with the varsity team during the offseason.

Mangano was taken aback by Ford’s agility and ability to cut on a dime and shrink his body while darting through a hole created by his offensive linemen.

Mangano immediately sent film of Ford to running backs coach Chris Farmer who was just as impressed. He then distributed tape of the drills to former Virginia Tech defensive coordinator Bud Foster, who was then the Hokies’ chief recruiter for the Fredericksburg area.

“He has the ability to get skinny in the hole,” Mangano said. “It’s almost like a good dancer. You can’t teach it … He was doing things as a 14-year-old that made you scratch your head.”

Ford went on to leave many opposing coaches and defenders equally befuddled. He became a four-year starter for the Wolverines and set a school record with 6,210 rushing yards while reaching the end zone more than 100 times. He helped lead North Stafford to two state semifinal games before signing with Penn State in 2018.

Ford’s exploits from 2015–18 at North Stafford earned him Free Lance–Star player of the decade honors.

“He came in as a 14-year-old and from Day 1 he was the best player in our program,” Mangano said. “I go back to his very first game—14 carries, 237 yards and four touchdowns [against Osbourn] and he was humble throughout the whole experience. As great as Devyn Ford was on the field—and he was the best player I’ve ever coached—he was an even better person off the field.”

Those traits have carried over to college.

Ford was recently recognized by Penn State as one of 11 football players to record a 4.0 GPA last semester. He carried a 3.8 GPA throughout high school and became the first player in Mangano’s 24 years of coaching to be named a captain every year. Ford had perfect attendance through high school until he took off one Friday as a junior for his official visit to Virginia Tech.

Mangano said Ford was always the first to show up for volunteering opportunities in the Stafford County community, including serving meals to the homeless.

He said Ford’s character is going to take him further than his running and cutting abilities.

“When you get to the Penn State level and every level afterward, I don’t think it’s the physical ability that separates you because they’re all great athletes,” Mangano said. “I think it’s the guys that have the mental capability, the mental toughness and the grit to overcome that make it. He’s got all the intangibles to be successful.”

Ford put those traits to use at North Stafford. After Mangano sent his practice film to Foster, Virginia Tech was tempted to offer him a scholarship before he played a high school down. The Hokies, however, held off until later in Ford’s freshman season.

He finished with 2,248 total yards and 27 touchdowns his début campaign. By the following spring he held more than 20 Division I offers.

Ford said after that season he found himself a target the rest of his career. It was a bit of a rough adjustment when he was a sophomore. He finished 2016 with 1,130 yards and had the end of the season hampered by a broken thumb.

“That’s when they knew who I was and had figured me out a little bit,” Ford said.

But Ford didn’t stay down long. He returned for the best season of his career—a junior campaign in which he hit 2,065 rushing yards and 32 touchdowns. The Wolverines used him in a variety of ways as a senior, when he rushed for 1,159 yards and 23 touchdowns, added 424 receiving yards and five touchdown catches and excelled as a defensive back and return man.

“I was a lot more versatile,” Ford said of his final high school season. “It took a lot of stress off of me at the running back position and it was fun playing all those different positions.”

Ford has settled in at running back for the Nittany Lions. He finished his true freshman season last fall with 294 yards and three touchdowns, averaging 5.7 yards per carry. He had an 81-yard touchdown run in his first career game against Idaho. He’s competing with fellow sophomore Noah Cain for top backup duties behind incumbent Journey Brown to start fall camp.

Ford said he had a “welcome to college” moment last fall when two Iowa linebackers crushed him at once. He believes he’s more equipped for those blows entering this season.

“For me, looking at Devyn I definitely see that he has gained more weight and muscle,” said Penn State rising sophomore linebacker Brandon Smith, a Louisa High graduate. “His workouts and being devoted to the weight room and stuff like that has really showed. You can see his body maturing and how big he’s getting.”

Ford said when players were sent home as the COVID-19 pandemic took hold, his stepmother’s meals kept him well fed. He also did speed and agility training with Kevin Johnson at Team Ascension in Stafford. He said most of his weight training has taken place since he’s been back on Penn State’s campus.

He’s hoping it leads to him making a name for himself in the Big Ten Conference and perhaps the nation, just as he did in the Fredericksburg area.

“To have the opportunity at the college level is pretty nice,” Ford said. “In high school, your ambition is to play college ball. To actually be here is almost like a dream.”

Starting last week, The Free Lance–Star begins unveiling our All-Decade high school sports teams. We'll cover one season each week, starting with fall sports, and choose an athlete and coach of the decade, plus a look at the best individual season by an area team.

Here is the past week's schedule:

North Stafford’s Devyn Ford (left) skirts a Halifax defender while returning a punt for a score during a 2018 playoff game.

North Stafford’s Devyn Ford outruns a Stone Bridge defender during the Class 5 state football semifinal in 2018. Ford is the Free Lance–Star’s player of the decade.