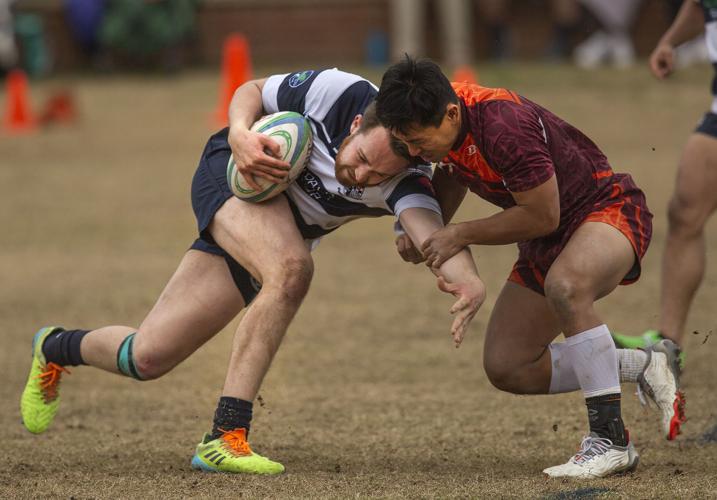 Aidan Gallagher of UMW goes head-to-head with Nader Dajani of Virginia Tech during the Chesapeake Conference tournament in Fredericksburg on Saturday, April 9, 2022. 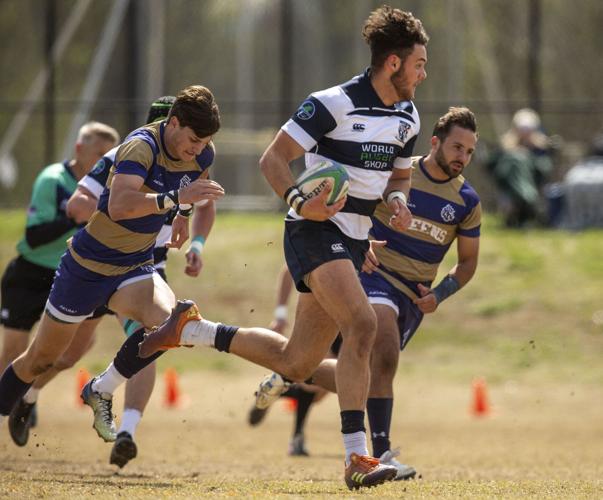 Sebastian Schefermann of UMW carries the ball to the goal line against Queens in a Chesapeake Conference match on Saturday. 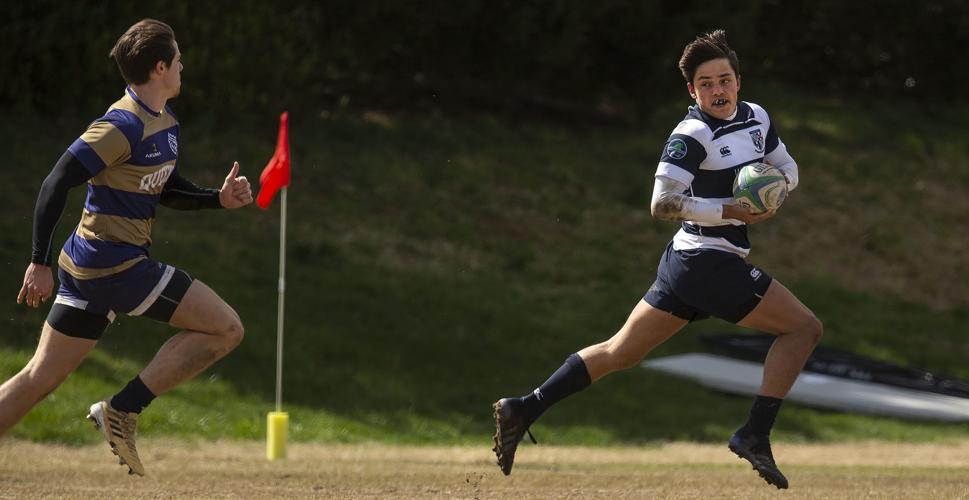 UMW's Connor Foster scampers to the goal line ahead of a Queens defender during the Chesapeake Conference tournament in Fredericksburg on Saturday, April 9, 2022. 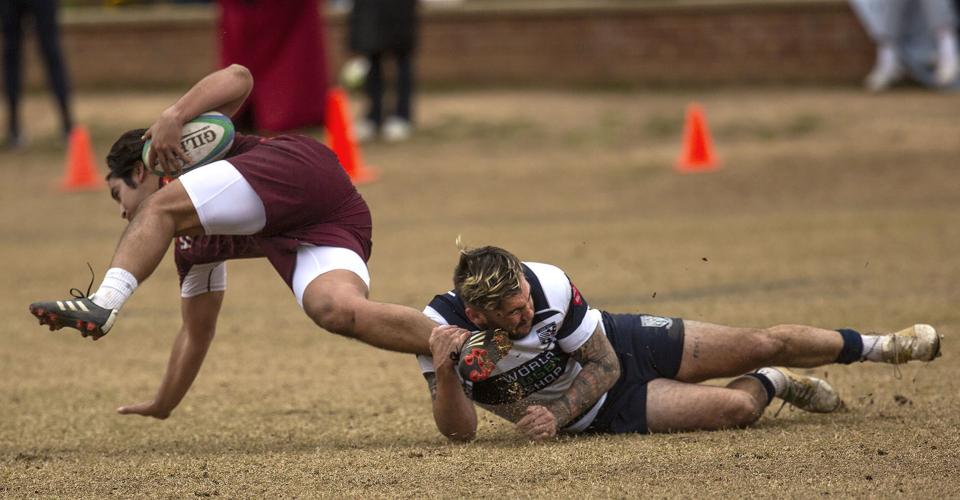 Adam Wagner of UMW takes down Quin Byrd of Virginia Tech during the Chesapeake Conference tournament in Fredericksburg on Saturday, April 9, 2022. 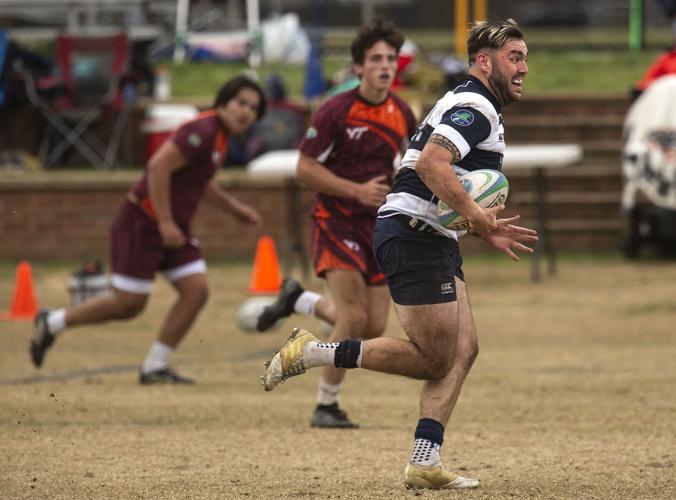 Adam Wagner of UMW takes the ball to the goal line during a sevens match against Virginia Tech.

By DAVID KESSLER FOR THE FREE LANCE-STAR

The University of Mary Washington came up inches short in the semifinal of its rugby sevens Chesapeake Conference Championship tournament Saturday, but the team has a bright future and a lot to offer at the university, in Fredericksburg and in the growing world of American rugby.

Since making the switch from club sport to team sport in 2016, UMW has become a rugby powerhouse, winning the Division 1 championship in the fall of 2017 and spring of 2018, and contending each year since.

Recruiting has been a key to success, with players coming from all over the rugby world. England, Ireland, Scotland, Wales, South Africa and New Zealand are all represented alongside Virginia, Maryland and North Carolina.

“Mary Washington was one of the first teams to begin recruiting rugby players internationally,” said team president Joseph Rutter, a senior. “Even as not technically a varsity sport where we’re able to give out large scholarships, there were a lot of people that wanted to come to the United States for their academic careers.”

Though major colleges and professional sports tend to focus on football in America, rugby is extremely popular in many other countries.

“And obviously, because of the prominence of rugby overseas, a lot of those guys are very good rugby athletes,” Ritter said. “And so we were able to offer them a team where they’re able to continue playing their sport, but also attend university in the United States, which is something they were looking for.”

Sevens is arguably an easier game to watch for casual fans, but Major League Rugby and much of the professional game around the world plays the 15-man version, which features more technical skill at specific positions and a bigger role for the bigger players up front, akin to American football’s linemen.

Connor Foster, a freshman from Leicestershire, England, led the scoring Saturday for the Eagles, who won all four of their pool games before falling 14-12 in a semifinal to eventual champion Mount St. Mary’s (Md.).

Foster, who had eight tries (the rugby equivalent of touchdowns) in his four matches, hopes for an eventual professional rugby career, but meanwhile plans to major in business administration with a minor in sports management.

“I really like rugby, and I looked around the English unis and wasn’t the biggest fan,” he said. “I thought America was great, lots of sports over in America. And I’m a big fan of the school. Big fan of the weather as well.”

Players have travelled to Ireland, Spain and France in recent years, playing rugby with local teams and establishing connections, particularly with the University of Connaught in Ireland.

Tim Brown, who played rugby for UMW when the team was nationally ranked in the 1990s, has been a leader of the team’s rise to prominence, and believes in the power of rugby to lift the university, to help the economy and to help youth in the region.

“As universities evolve, they’ve got to see what their niche is and what attracts students,” Brown said, “and you’d be hard-pressed to find a program that casts a wider net and brings a higher-caliber student and a better representative of the university than Mothers Rugby.”

Tournaments like the one Saturday at UMW bring many of the parents of the international students to town, as well as the teams and supporters from Maryland and North Carolina. Most stay in hotels and eat, drink and shop in the area. The parents of two students even bought houses here.

Rugby’s popularity is growing in America, and the university program offers a path to a possible career in professional rugby. Brown is now head of Player Pathways at Old Glory, Washington’s team in Major League Rugby, the U.S. professional league.

Reyes participates in Old Glory’s academy program and will be pursuing a career in the sport after he graduates. Brown also heads a non-profit foundation called Young Glory, which helps youth rugby programs around the region.

“We do a lot of women’s rugby, empowerment for young girls,” he said. “I’m very proud of the fact that my program under Old Glory, we’re one of only two Major League Rugby teams that have a women’s program as well. I have an even equal responsibility and an equal focus to grow the girls’ game and I’m trying to get more young women involved in rugby.”

The programs have players ranging from four or five years old to their early 20s.

As head of Player Pathways, Brown hopes some of the UMW players will make their way to the Old Glory academy teams and a future in the professional sport. Currently, one recent graduate – Matthew Gordon, a student from Scotland – is on the Old Glory roster.

Ritter, the team president who hails from Northern Virginia, plans to coach and pursue a rugby career in Spain after he graduates.

But the seniors appear to be leaving the rugby program in good hands.

Brown said the new class of recruits, which again features players from around the world, is arguably the best in the nation.

Coach Hendrick van Zyl gets even more excited when talking about his young players who are just finishing up their first year. Much of that talent was on display at Saturday’s tournament.

Sebastian Schefermann, a freshman who was born in South Africa and played his high school rugby in Dubai, had three tries Saturday.

Jamie Cooper had several big runs on the day, and Rory Naylor and Kit Waddington each managed to score a try. All three are freshmen from Ireland.

Van Zyl is expecting big things from all of them next season, when the focus returns to the 15-man game, and also from Lewis Naylor of Ireland, another try-scorer Saturday, and Bill Tamani of New Zealand.

Barring an unforeseen invitation to the national championship tournament in May, UMW’s sevens season is over, but the Eagles will play a “curtain-raiser” against Mount St. Mary’s Friday before Old Glory plays Utah Friday at Segra Field in Loudoun County.

Aidan Gallagher of UMW goes head-to-head with Nader Dajani of Virginia Tech during the Chesapeake Conference tournament in Fredericksburg on Saturday, April 9, 2022.

Sebastian Schefermann of UMW carries the ball to the goal line against Queens in a Chesapeake Conference match on Saturday.

UMW's Connor Foster scampers to the goal line ahead of a Queens defender during the Chesapeake Conference tournament in Fredericksburg on Saturday, April 9, 2022.

Adam Wagner of UMW takes down Quin Byrd of Virginia Tech during the Chesapeake Conference tournament in Fredericksburg on Saturday, April 9, 2022.

Adam Wagner of UMW takes the ball to the goal line during a sevens match against Virginia Tech.