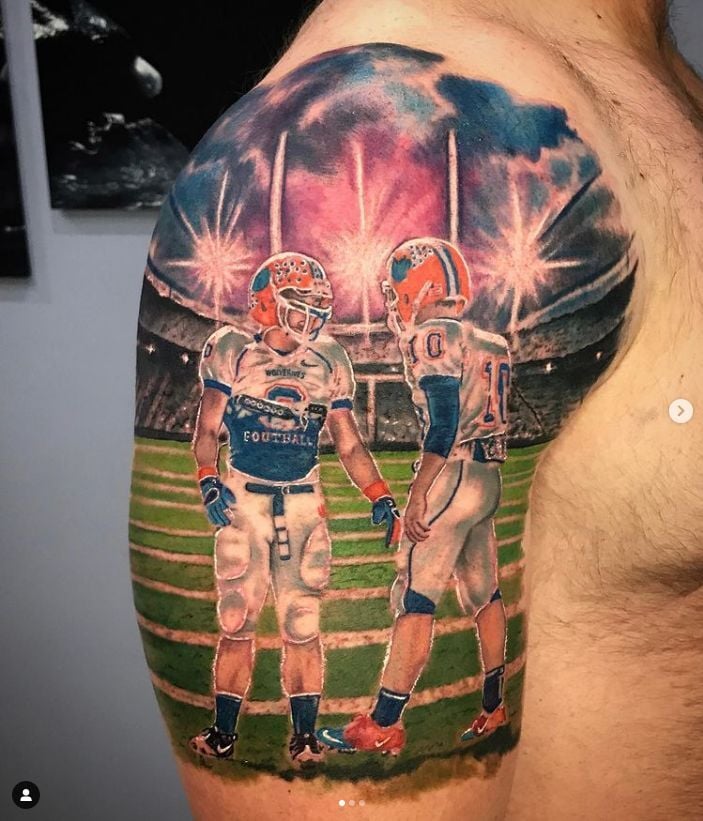 Joey Slye's tattoo is a photo of him and his brother, A.J., in the last game they played together.

ASHBURN—Growing up in a military family, Joey Slye spent time growing up in New Mexico, Montana and California before moving to Virginia when his dad was stationed at the Pentagon.

It was good preparation for life in the NFL.

Slye, Virginia Tech’s all-time leading scorer, signed with his third NFL team of the season this week as the 25-year-old continues to search for a stable gig as a pro kicker.

“Been living in hotel rooms for the past couple months,” he said. “DoorDash has been a great friend of mine recently.”

This one is special because it brings him close to family, as well as coach Ron Rivera, who gave Slye his first NFL kicks in Carolina.

Slye said his fiancée grew up a Washington fan, and he’s expecting a big turnout on Sunday when the team faces Tampa Bay.

“I’m going to try to limit the amount of people on my ticket list, because that comes out of our paycheck,” he said with a laugh. “For a lot of people, this is the first time they’ve been able to see me play this year.”

Being back in Virginia has brought back memories for Slye, including one he wears on his sleeve—a tattoo of him and his late brother A.J. in the final game they played together, a state semifinal loss to Phoebus at North Stafford High.

After a year in college, A.J., a linebacker, was diagnosed with leukemia and died in 2014.

Slye promised A.J. he would make it as a football player, and has carried his brother’s memory with him ever since. After making field goals, he will hold up six fingers, A.J.’s uniform number.

While this is Slye’s third stop of the NFL season, it’s his best opportunity to find a more permanent home, as he is not replacing an injured player, but rather one who was just cut for lack of performance (Chris Blewitt).

Slye said he knew what he was signing up for when he started chasing his NFL dream, and added that it’s tough to master a craft so quickly, even after college success.

“I think there’s a little bit of a misconception with kickers coming out of college to say, like, you’re 22, you’ve got to be perfect,” he said. “If I walked out as a new grad (in a more traditional field), and said that I know everything, I think everyone would be like, you’re a little bit too big for your britches there, you need to kind of still continue to learn.”

That’s exactly what he has done, including enlisting a sports psychologist, Dr. Joanne Perry, to help him with the mental side of the game.

It’s something that has become increasingly accepted in the testosterone-fueled world of pro football.

“The beginning connotation is like, I’m not messed up, like you’re messed up for telling me that I’m messed up,” Sly said. “And then realizing like, holy crap, like I am kind of messed up, right?”

He said players like Dak Prescott speaking openly about their struggles with mental health has helped normalize the practice.

“I think the connotation of a sports psychologist has changed so we don’t look at someone like, oh, you’re weak minded or something like that because you’re working with someone,” he said. “I really do think the ability for us to continue to say that the mind is a muscle, and we need to work it effectively, is really important.”

Now Slye wants to see that growth translate to results in Washington. He converted field goals in Carolina at a 79.4% clip, which is enough to stick in the NFL long-term, but extra points have been his kryptonite—he’s missed 10 of his career 83 attempts after touchdowns.

Rivera, who gave Slye his first kicks, feels he’s up to the task.

“He is still a young guy still learning his craft,” the coach said. “Very rarely do you see a kicker come out as a rookie and have a 10-year career at one spot. They’re going to bounce around a little bit, and you’ve got to catch lightning in a bottle and be able to get the guy at the right time.”

Is The MLB HOF voting outdated?

Super Bowl LVI is almost here! A look back at some of the most popular ads of all time

Super Bowl LVI is almost here! A look back at some of the most popular ads of all time

A guide to the upcoming 2022 Beijing Olympic Winter Games

A guide to the upcoming 2022 Beijing Olympic Winter Games

Final exams are usually one of the things quarterbacks are glad to be rid of when they leave college for the NFL. Sometimes, though, like Aaro…

Joey Slye's tattoo is a photo of him and his brother, A.J., in the last game they played together.