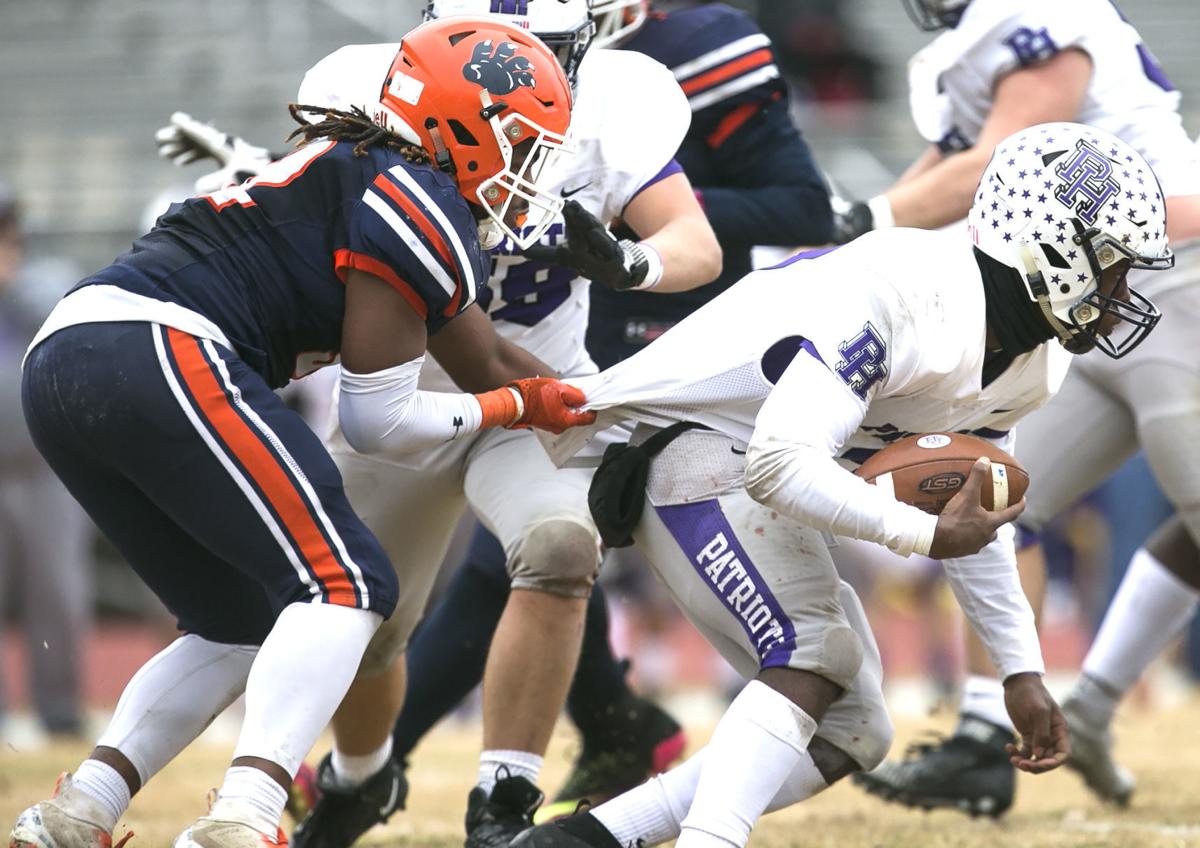 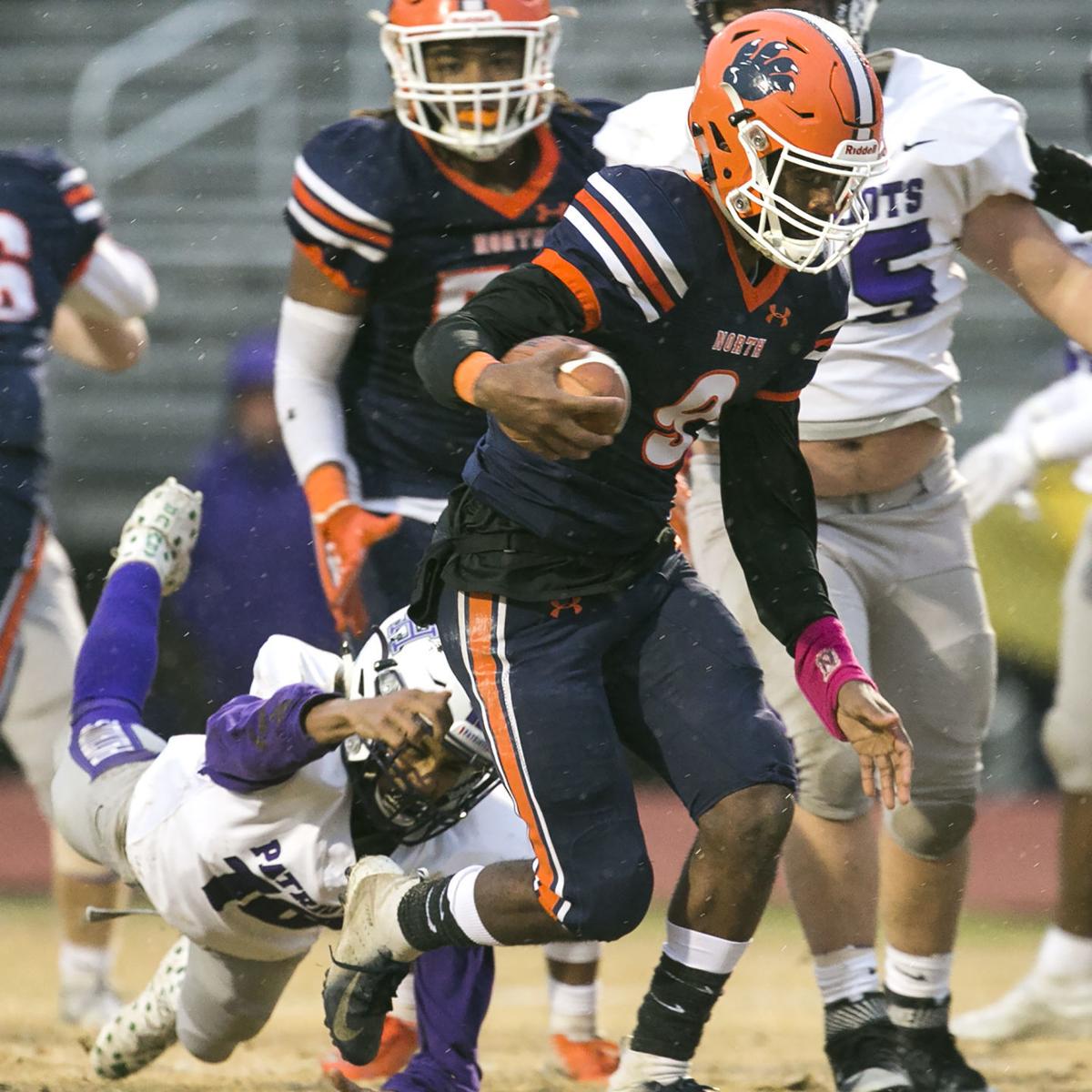 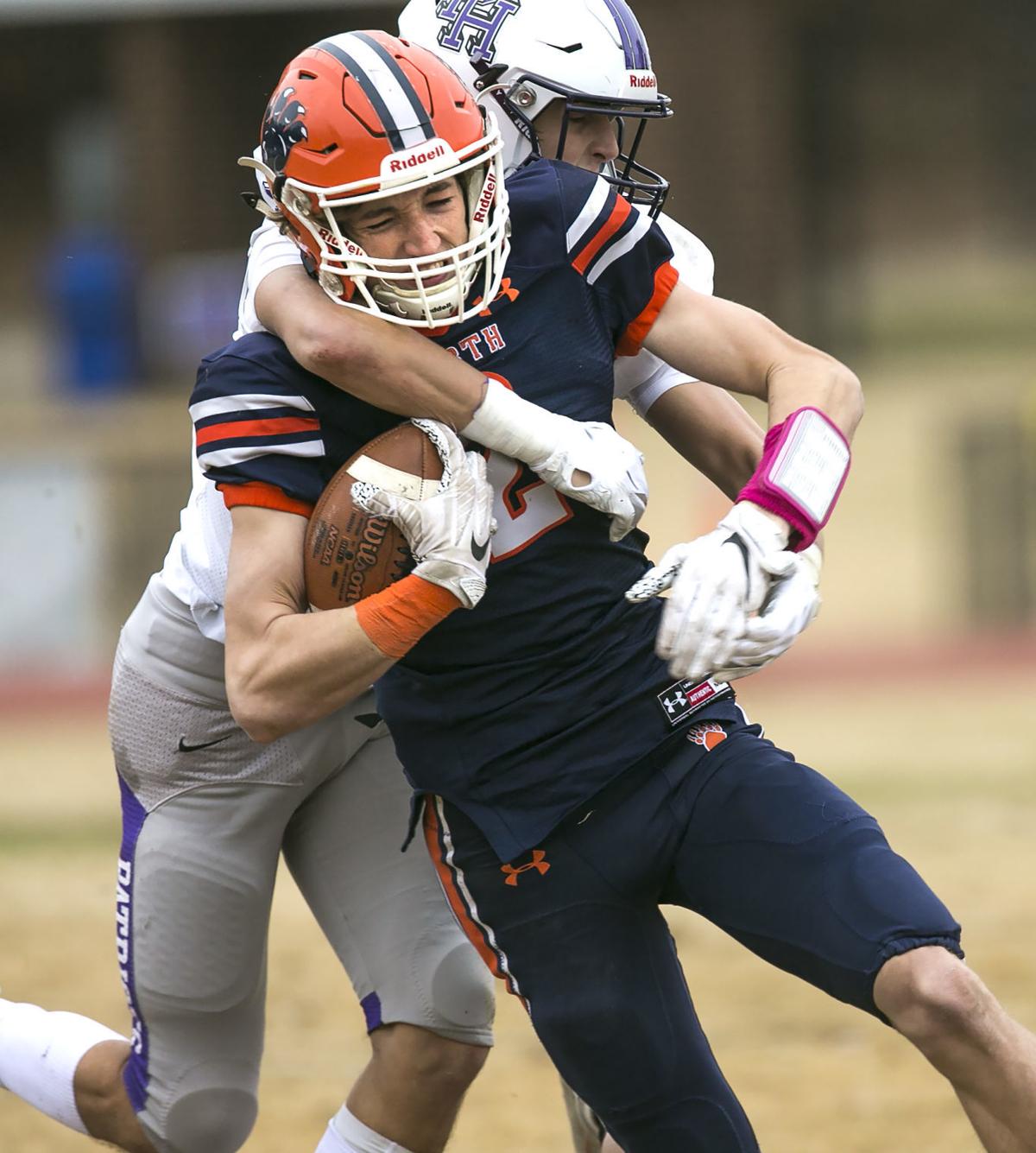 The Wolverines’ Holt Egan gets hauled in by the Patriots’ Tremaine Divers after Egan caught a reception from quarterback Jamir Boyd during Saturday’s game. 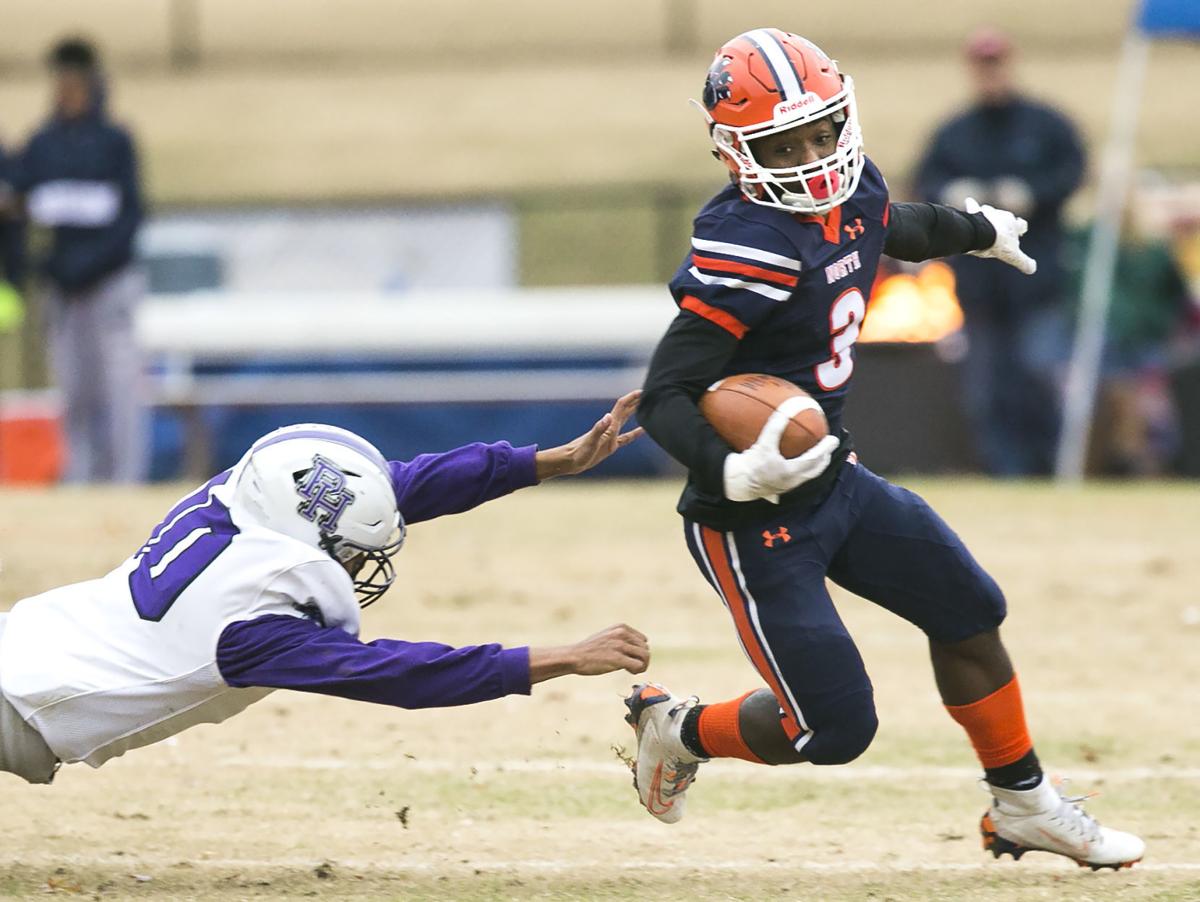 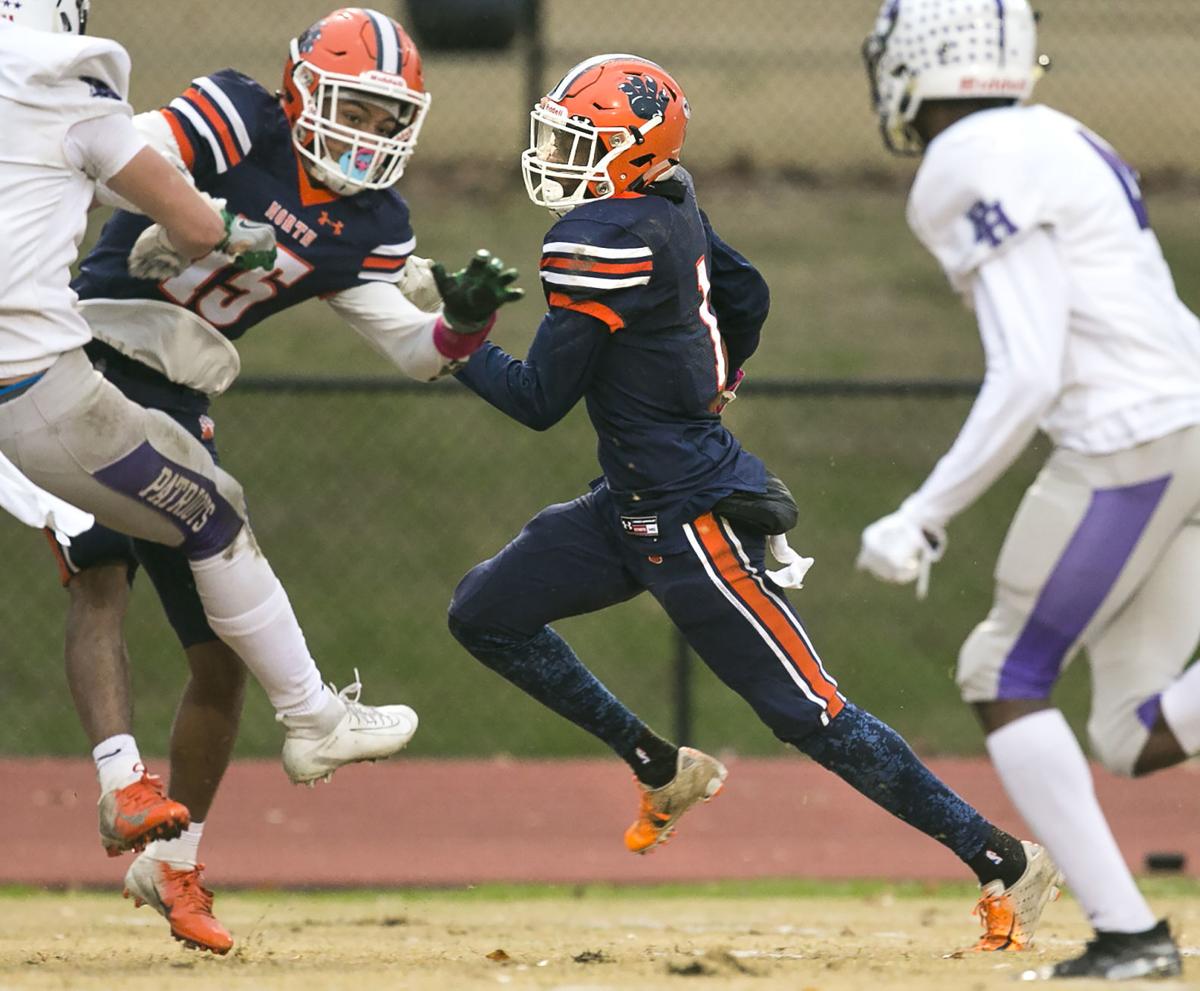 Javon Swinton found the end zone three times that counted, and North Stafford’s defense was stifling as the Wolverines earned a return trip to the Region 5D championship game with 31–7 victory over visiting Patrick Henry–Roanoke on Saturday afternoon.

The game had all the makings of a North Stafford rout early on. The Patriots went backwards on their first possession and were quickly forced to punt.

Swinton then caught a Jamir Boyd pass on the team’s first offensive play and took it 65 yards for a touchdown.

“This being my senior year, I didn’t want it be the last time I’m playing,” Swinton said, “so I just went out there and gave it my all.”

Patrick Henry was forced to punt two more times in the first quarter without ever recording a first down.

Meanwhile, Boyd and Swinton connected again on 20-yard score to give the Wolverines a 14-point lead, and a third long touchdown connection was called back by penalty.

In fact, flags seemed to by flying everywhere, as the first half was marred by numerous penalties and chirping on the field.

The Wolverines appeared to have stopped Patrick Henry on fourth down twice on their second quarter touchdown drive, but penalties gave the Patriots a new set of downs each time.

Jalen Cook eventually ran the ball in from 6 yards out, and the Patriots trailed just 14–7 at the half.

“I think we were a little too heated there at the beginning,” Wolverines coach Neil Sullivan said. “I think we kind of brought it in, we focused up. I thought we came back out and played a much more polished second half.”

At halftime, he said, “we talked about the fact that you’ve gotta just control what you can control, which is yourself. So I was proud of the way our guys responded, the way they came out here and took care of business in the second half.”

In the second half, another long Boyd-to-Swinton touchdown was called back, Matt Warren kicked a field goal, the defense again stymied the Patriots rushing attack deep in their own territory, and Swinton found another way to score.

He picked up a short punt and ran it back 35 yards to give the Wolverines a comfortable 17-point lead. Boyd scored from 3 yards out a few minutes later to finish the scoring.

“Now we have the opportunity to go out here and be back-to-back region champions,” Sullivan told his team after the game. “Ain’t too many teams in North Stafford history who can say that. We’ve got something big on line next week, boys.”

The team won’t have to travel far for the championship game.

“We’re beyond excited to have this opportunity to go play Mountain View next week,” Sullivan said.

The Wolverines lost to the neighboring Wildcats, 34–26, in early October.

“We’ve got a few guys healthy that weren’t at that time, so we’re hoping that helps,” Sullivan said. “We’ll go back and look at the film and we’ll look at what hurt us, and we’ll try to address those issues. They’re a really good team, and they’re really well-coached, so we’re excited about the competition level we’re going to face.”

Mountain View coach Lou Sorrentino will be familiar with the Wolverines. In addition to their regular meetings, he was spotted in the stands watching Saturday’s game.

“I figured that would happen when we got bumped to Saturday. But they were going to get the film either way, so, nothing too secret,” Sullivan said.

“We’re looking forward to starting to break’em down, and I believe the game’s going to be on Saturday,” he said. “So, a week from today, we’re going to have a great opportunity in front of us.”

The Wolverines’ Holt Egan gets hauled in by the Patriots’ Tremaine Divers after Egan caught a reception from quarterback Jamir Boyd during Saturday’s game.