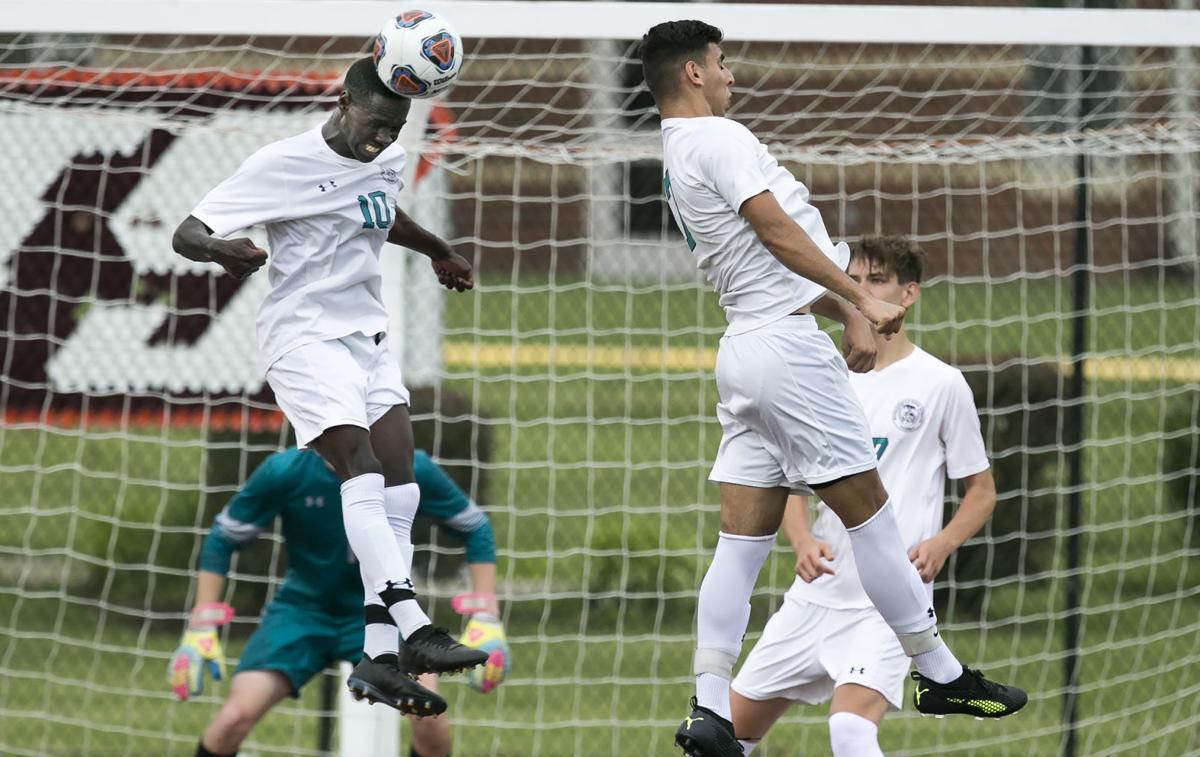 Massaponax senior midfielder Gadsoni Abel (left) is a potent scorer who can play defense, too. 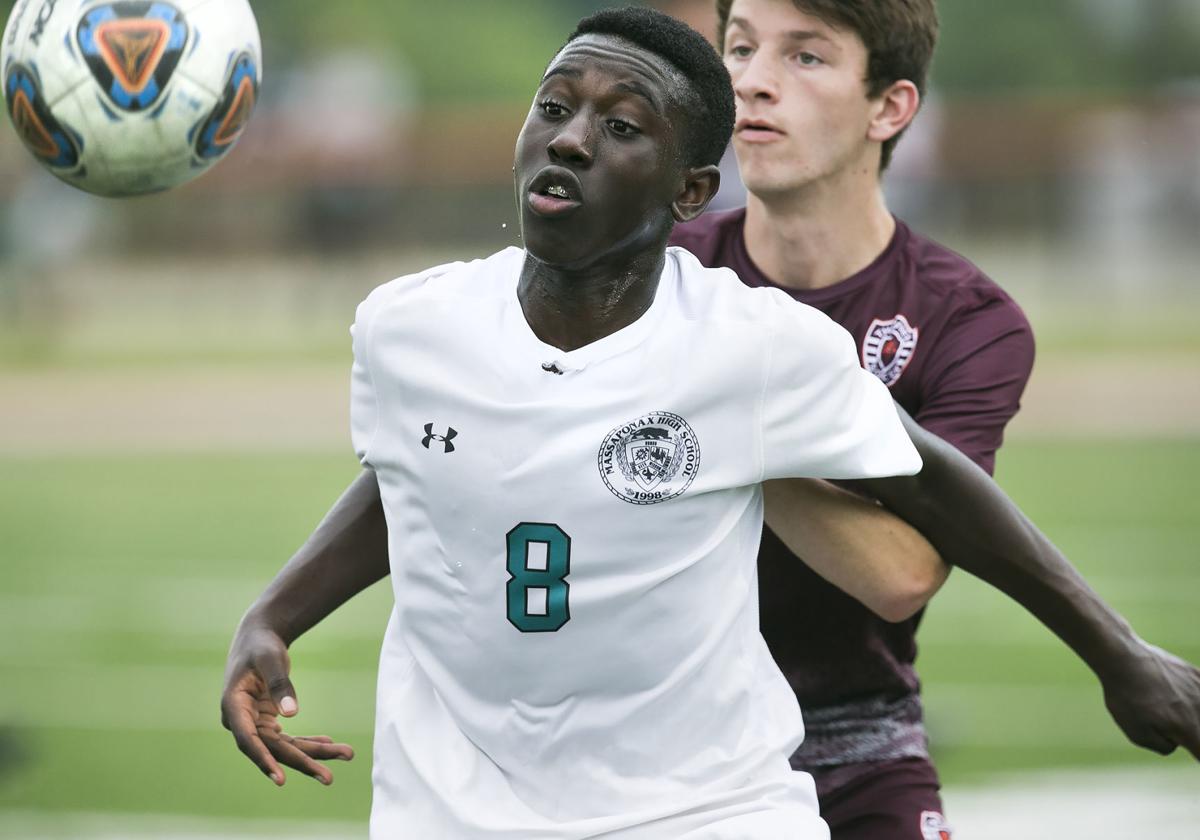 Massaponax sophomore Godfrey Abel (8) has scored nine goals in his first season as a starter. 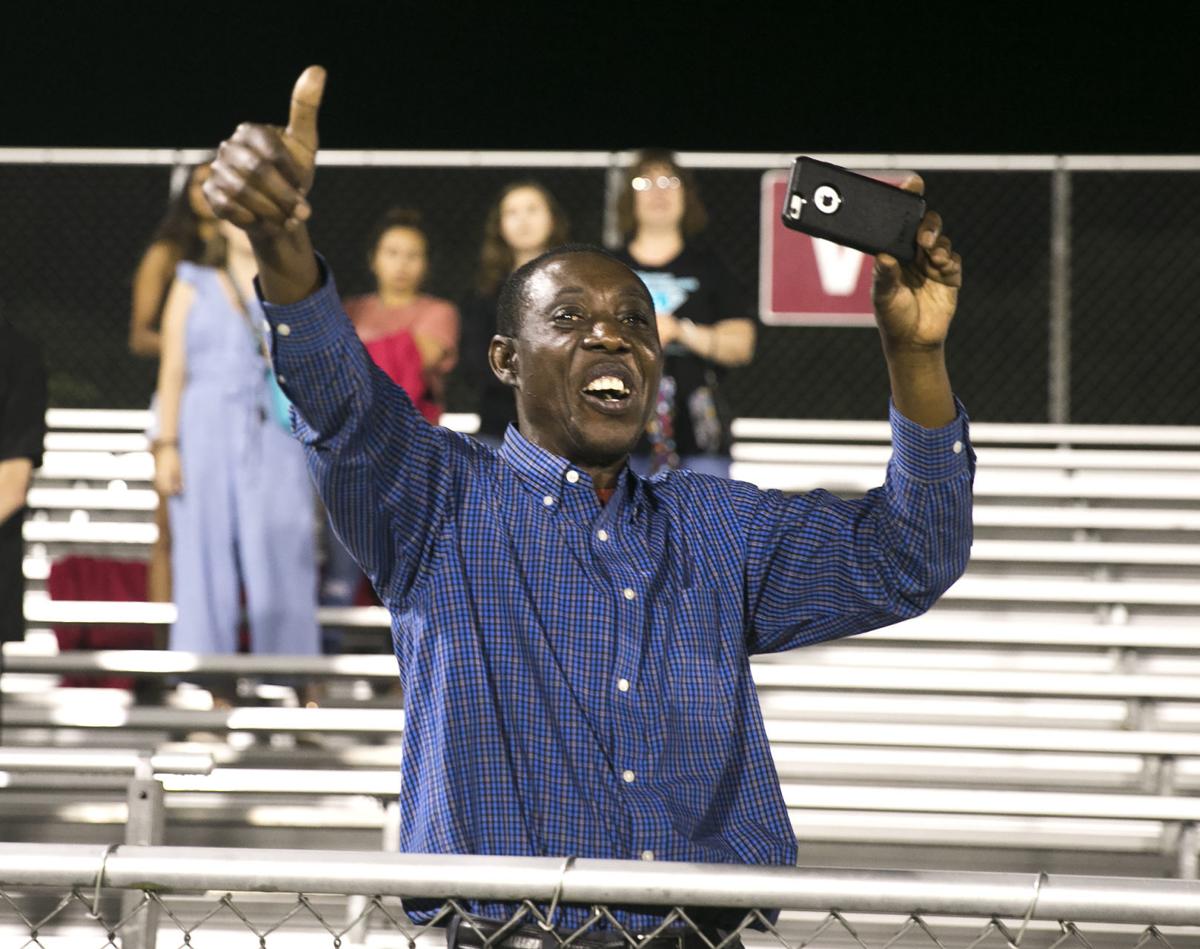 Ndayahiya Abel celebrates as he videotapes his sons in the Region 5D championship match.

Gadsoni Abel doesn’t dribble so much as dance, and it’s easy to see where he gets his rhythm.

It’s a Sunday at 12:30 p.m., and Abel makes his way down a staircase and into the basement of Fredericksburg Baptist Church. Usually, the space is reserved for Sunday school—there’s a ping-pong table and an arcade-style basketball game among other diversions—but this isn’t the time for play.

Two groups of chairs form a makeshift aisle, before which a dozen women, including Abel’s mother Ciza Estherine, are gathering. Soon they begin to sing, their vibrant notes rivaled only by a palette of traditional Burundian kikwembe dresses. As they sway in unison, a drum machine and electric guitar add to the tonal tapestry.

When Massaponax High School hosts Freedom–South Riding in a Class 5 boys soccer state quarterfinal on Tuesday at 7 p.m., Abel, the Panthers’ star midfielder and team captain, and his brother Godfrey, a promising sophomore, will look to extend an already unforgettable season.

But this time is for remembering. Remembering Africa, where the Abel brothers lived until the ages of 6 and 4, respectively. Remembering Kirundi, a language whose words speak to their past. And, most plainly, remembering a God who—they are sure—led them here.

“We all sing, praise the Lord,” Gadsoni Abel says. “That’s how we connect with our culture.”

Distance, both temporal and physical, has reduced the Abel brothers’ recollections of Mtabila Refugee Camp to a series of dreamlike snippets.

There was a small brick home and a school that allowed its students to walk home for lunch. Food was scarce, even when the United Nations would drop off sacks of flour and maize.

Soccer, by contrast, was never in short supply. The camp had no sporting goods stores, obviously, so the children would scavenge for plastic shopping bags. When they’d gathered enough, they’d bunch them together and tie the bundle with a string to fashion a ball.

“It was a lot different,” says Godfrey Abel, “especially since they weren’t as heavy as the balls we have now. But we still made it work out.”

Their games had no age requirements and were untimed, save for dusk and dawn. The Abel boys—there are six of them—shrouded themselves in soccer when little else about their childhood made sense.

“I didn’t know much about my surroundings,” Gadsoni Abel says. “I was just living in the moment.”

They were unaware, for example, of the nightmarish circumstances that brought their family to Tanzania. Their father, Ndayihaya Abel, was only 5 himself when his parents fled the ethnic conflict between the Hutus and Tutsis that engulfed their home country of Burundi in 1972.

By the time Gadsoni was born, the Abels had been refugees for more than a generation. That changed in 2007, when the family was selected to begin the process for resettlement to the United States.

“I told them it’s a good chance, but that only God knows what is going ahead in our future,” Ndayihaya Abel recalls. “Especially for you children.”

Gadsoni remembers jumping up and down on his bed in the room he shared with his brothers, until the oldest, Alexander, burst in and told him to stop. But he didn’t want to stop.

“I think that was probably the best moment of my life,” Gadsoni says.

At some point during last week’s Region 5D championship game, Gadsoni heard his name being shouted from the visitor’s bleachers at Mountain View High School.

Craning his neck when the action moved away, Abel spied his three brothers and, next to them—blue plaid collared shirt saturated from a driving rain—his father.

Ndayihiya Abel, 51, isn’t typically able to attend his sons’ games. He works long hours as a custodian at the church, physical labor that leaves him sapped in the evenings. But there he was, having summoned enough energy to withstand two lightning delays and overtime of a match that lasted nearly four hours.

And win the Panthers (14–3–1) did, securing the program’s first region title since 1999 and clinching a home game in the state quarterfinals.

The Abels are a big reason why. Gadsoni will play at the University of Mary Washington next fall, spurning offers from Division I suitors VCU and Radford in favor of staying close to home. In his first season as a starter, Godfrey has emerged as a potent offensive threat with nine goals and four assists.

When his family came to America, settling first in Stafford and later Fredericksburg, Gadsoni found soccer easy. Too easy, it seemed, for the 7-and-under age division at Dixon Park.

“He could start as the goalie and dribble through the whole field and score,” says Randall Pierce, a Massaponax assistant and longtime family friend of the Abels. “But he wasn’t the kind of kid who had to do that all the time. Sometimes, he’d dribble all the way to the goal and pass—just to let someone else score.”

At Massaponax, Gadsoni plays the role of “8,” or attacking midfielder. He still dispatches man marks with ease—each step and touch as light as one of those homemade balls from the refugee camp.

“He’s one of the few players I’ve coached that every time they get the ball on their foot, you just expect good things to happen,” says Massaponax coach Matt Eby.

To watch Gadsoni and Godfrey coordinate on the pitch, you might think they have their own private language.

And you’d be right.

Sometimes for secrecy and sometimes for emphasis, the brothers slip into their native Kirundi during matches.

“Kubita! [Fight!]” Gadsoni might implore when Godfrey is tied up with an opponent. In turn, Godfrey orders his sibling to “Genda imbere!” or “move up!” as the Panthers build their pressure.

Beyond choice phrases on the soccer field, Kirundi is the only language the Abels use at home. Both parents passed their citizenship tests and speak decent English; that isn’t the point.

“They don’t want us to forget our native tongue,” Gadsoni explains.

That includes body language. If you have the pleasure of meeting Godfrey, Gadsoni, or any of their brothers, you may notice that they support their right forearm from beneath while shaking hands. It’s an African gesture of respect, as if to say they need two hands to match the weight of a stranger’s.

Whatever one sibling accomplishes on the soccer field or in the classroom is hailed as a family achievement. The two oldest brothers, Nehemia and Alex, also played soccer at Massaponax; when Gadsoni accepted a glistening region trophy, it was partially on their behalf.

“The older we get, the more we realize how much our parents sacrificed to get us here, and we don’t want to ruin it for them,” he says.

Back at the Burundian service in the church basement, the music picks up again—a jubilant hymn about the heavens opening for Isaiah. It’s all in Kirundi. Volunteers hand out a beige songbook, and the preacher says to turn to page 346.

But Gadsoni doesn’t need to follow along. He remembers all the words.

FredNats manager Keister reflects on his bout with COVID-19

A quirk of spending most of one’s time in dugouts is that Tripp Keister never felt the need for a primary care physician. For eight months out…

The Wolverines boys soccer team added a key figure before the 2011 season, but that one player was did not a champion make. The North Stafford squad was already well stocked and ready for big things to happen.

Massaponax senior midfielder Gadsoni Abel (left) is a potent scorer who can play defense, too.

Massaponax sophomore Godfrey Abel (8) has scored nine goals in his first season as a starter.

Ndayahiya Abel celebrates as he videotapes his sons in the Region 5D championship match.