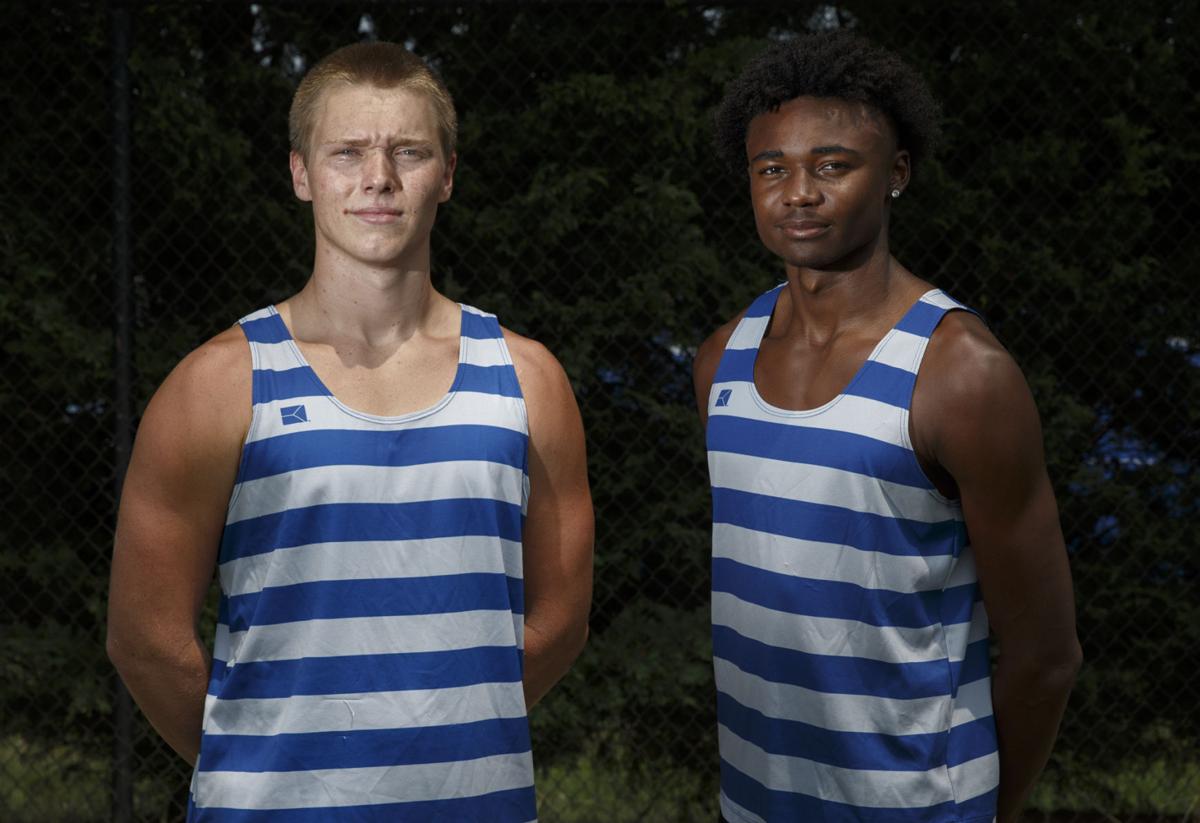 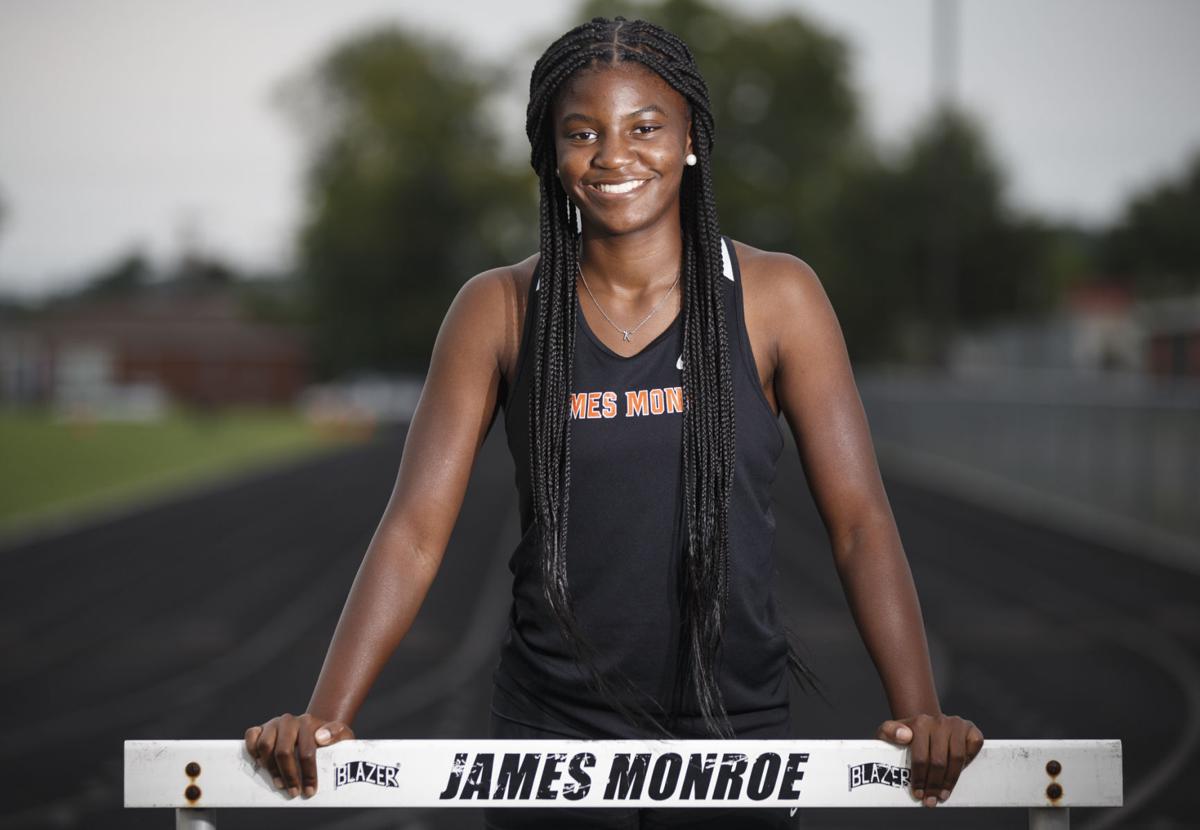 Jackson Vollbrecht had plenty to be proud of at the conclusion of the track and field season.

The recent Courtland High School graduate eclipsed his brother Jaekob’s school record in the discus and he soared past close friend Ben Beatty’s school mark in the shot put.

He also captured first place in each event at the Class 4 state meet last month.

But Vollbrecht is most elated that he and teammate Sean Wray propelled the Cougars to a second-place finish in the state as a team.

Wray took top honors in the long jump, triple jump and 110-meter hurdles and finished third in the 300 hurdles.

Vollbrecht noted the Cougars took all but two field events in the state: the high jump and pole vault.

“It was very exciting and cool to be able to go in there and sweep both of my events and it was especially nice to see us take four of the six field events,” Vollbrecht said. “It was a pretty cool experience for the program altogether.”

One day earlier, James Monroe freshman Kennedy Flynn had quite a day at the Class 3 state meet that was also held at Liberty University.

Flynn captured first place in the 100 hurdles, the 300 hurdles and she ran a leg on the Yellow Jackets’ state champion 400 relay to help JM finish second as a team.

Flynn is The Free Lance-Star girls track and field athlete of the year.

“With Kennedy, I don’t know her potential,” JM third-year head coach Nick Brousse said. “About halfway through the outdoor season I thought, ‘How much faster can she go? Can she hold this until the end of June?’ Her times kept dropping.

“… She’s got the most potential I’ve seen in my time as head coach at JM. That’s saying a lot because we’ve had some talented girls in the last couple of years.”

Flynn set a state meet record in the 100 hurdles (14.15) which is still not as fast as her personal best (14.07). She also swept both hurdles events in the Battlefield District and Region 3B.

She said the state title felt “regular.” She’s focused on running somewhere around the 13.8 mark next season and eventually going lower than 13 before departing high school.

She may also compete in sprints next season.

“I’m going to branch out to more like the 200 and maybe the 400,” Flynn said. “I don’t really like those events, but they help me stay strong toward the end of my hurdles races.”

While Flynn is preparing for three more years of high school, Wray and Vollbrecht are moving on to college, both as Division I athletes.

Wray heads to Howard University in Washington where he’s expected to focus on the long and triple jumps. Vollbrecht has signed with the University of Cincinnati. where he’s slated to perform the shot put, discus, weight and hammer throws.

Vollbrecht established a new Courtland school record with a discus throw of 183–11 and a shot put toss of 62–11.

He’s received some insight from his brother about what it takes to compete at the college level. Jaekob Vollbrecht is a standout thrower at Virginia Commonwealth University who qualified for the NCAA Eastern Regional meet as a sophomore this spring.

“He said it’s going to take some serious work,” Vollbrecht said. “There are no more games. You’re not going to get away with staying up late and eating bad. You’ve got be on your stuff at all times and I’m excited about that.”

Wray is eagerly anticipating college, as well. He said for the first time, he’ll have a coach specifically designated for his events. He believes that’ll help him reach new heights.

His long jump of 23–1 ½ won the state meet. He triple jumped 44–3 ¼. His winning hurdles time was 14.85 seconds but he’s not expecting to compete in that event at Howard.

Wray said without a designated jumps coach he learned mostly from watching videos and tips from teammate Brianna London, who won the girls’ 100 hurdles at states.

“It feels good to know I’m going to get a jumping coach,” Wray said. “I know I’m really going to explode over these next few seasons.”

Flynn had an early explosion at JM.

Those closest to her say she’s an introvert off the track, but extremely confident on it.

Brousse said she never wavered at the state meet after officials initially thought they may have to rerun the 300 because some of the hurdles were placed on the wrong marks. After an hour of uncertainty, it was ruled that her win in 46.32 seconds would stand. Brousse said he had no doubt she would have won again.

“With her, you would never know she was a freshman if it wasn’t written next to her name in the results,” Brousse said. “She is confident and unshakeable.”

This week, The Free Lance–Star unveils its Spring 2021 All-Area teams. Here is the schedule:

The Eastern View football team was halfway to Brooke Point High School for Friday’s scheduled game with the Black–Hawks when it got the news.

Chancellor finally got back on the football field Friday night, but crosstown rival Riverbend was approaching midseason form and came away wit…

When Robbie Jenkins thinks about how devoted his father was to his family, his mind immediately zeroes in on a moment that took place almost 2…

As the clock struck triple zeros to end Friday night's game, Spotsylvania  head coach Jeremy Jack was rewarded with a Gatorade bath after his …