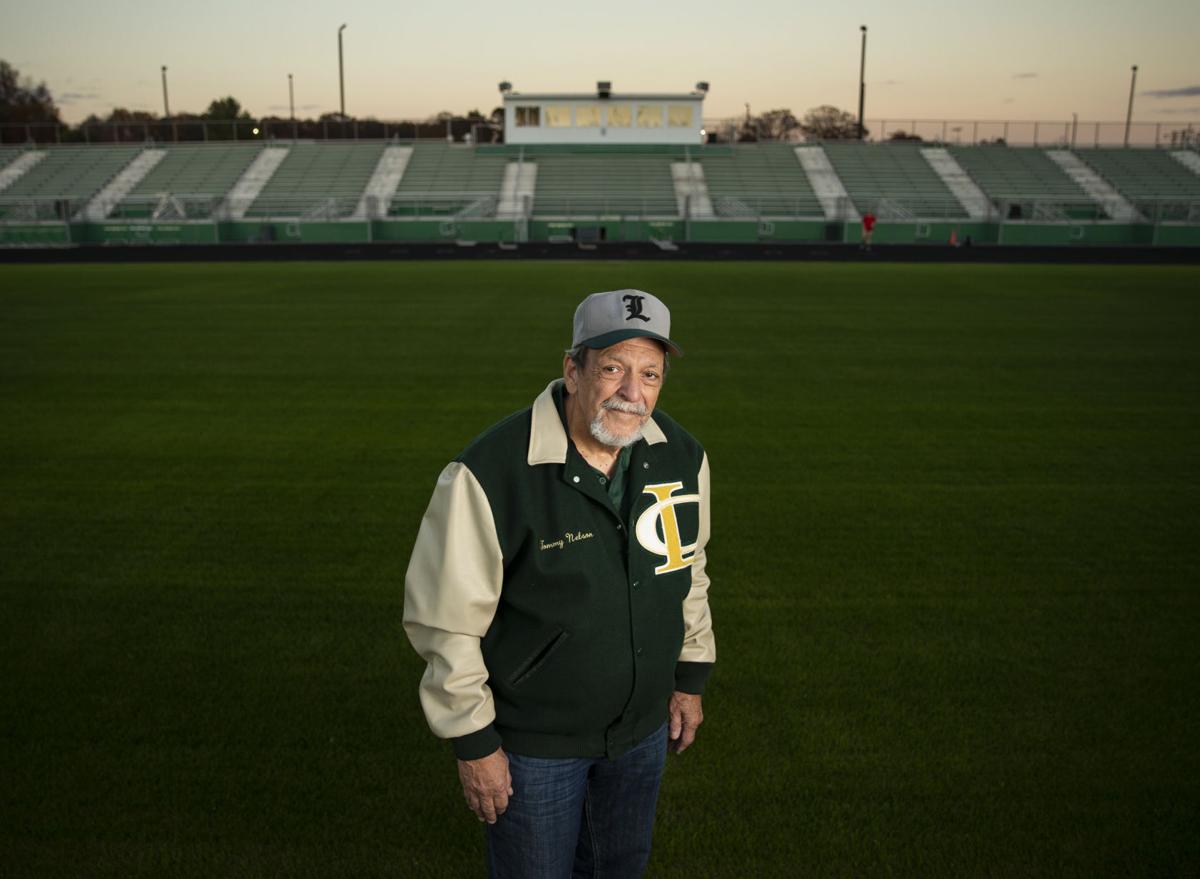 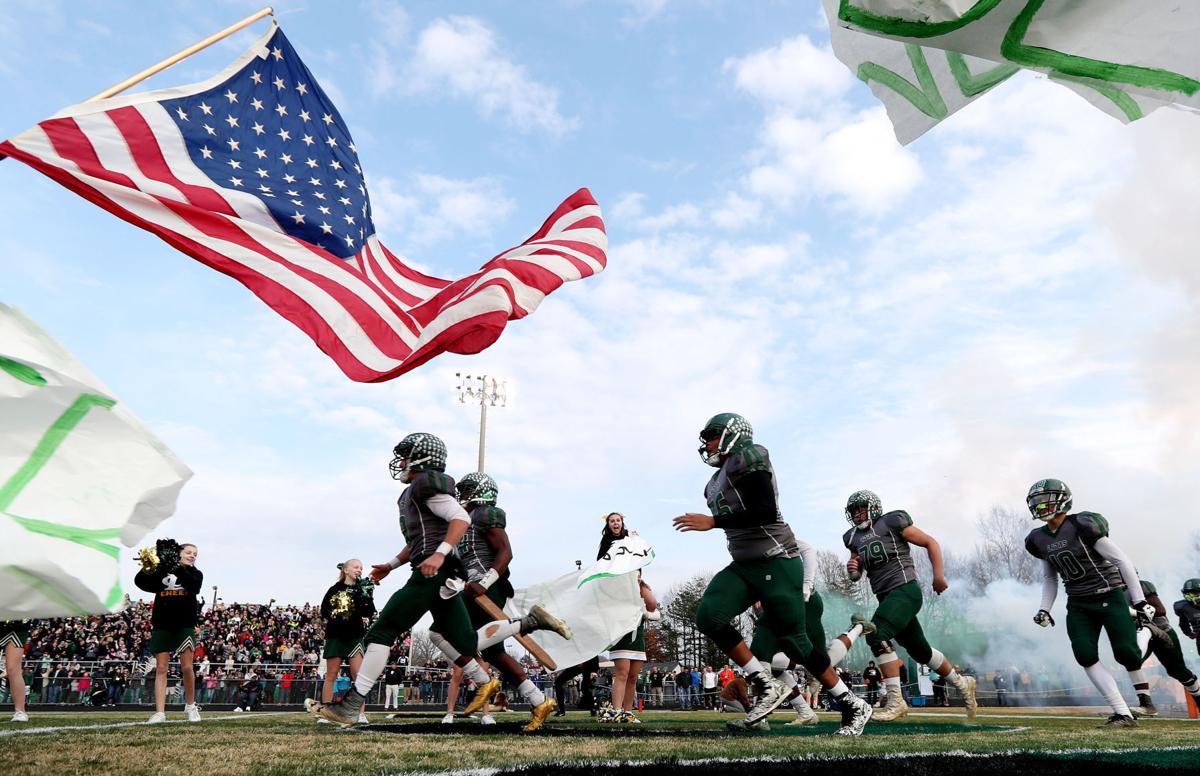 Louisa players usually take the field for home games to plenty of pomp and circumstance, as they did before this 2017 state semifinal game with Lafayette. 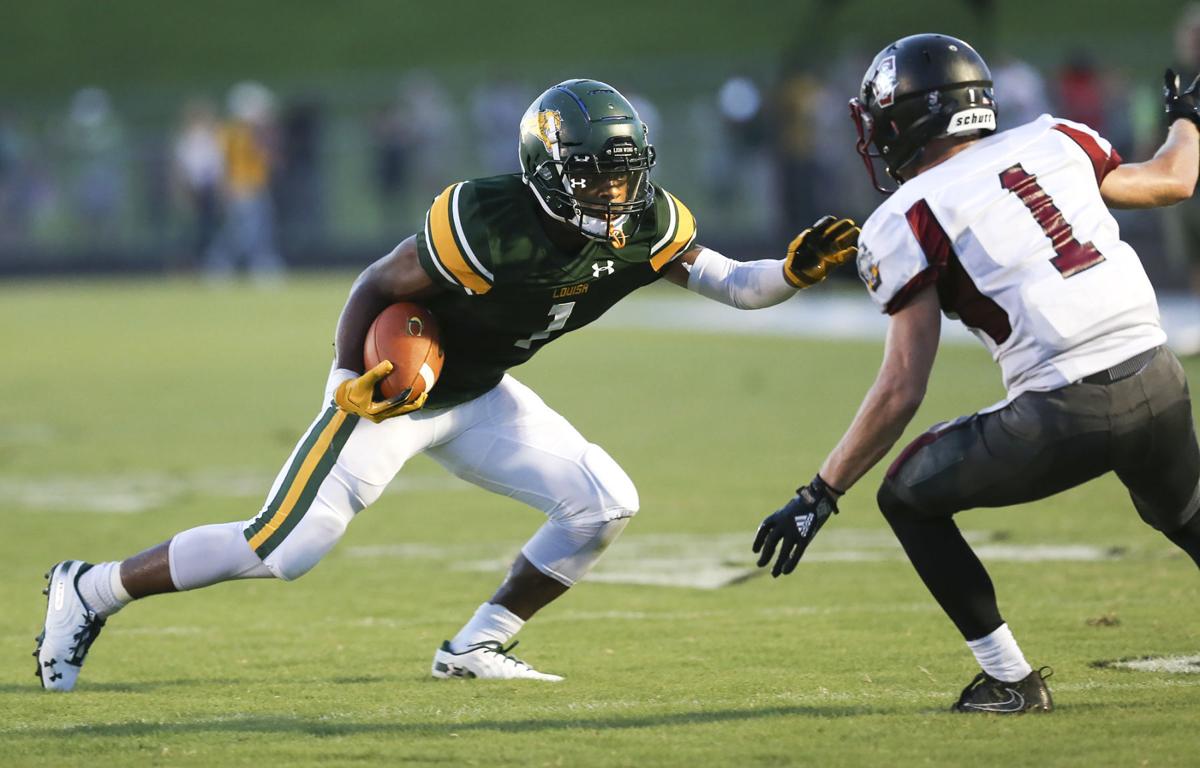 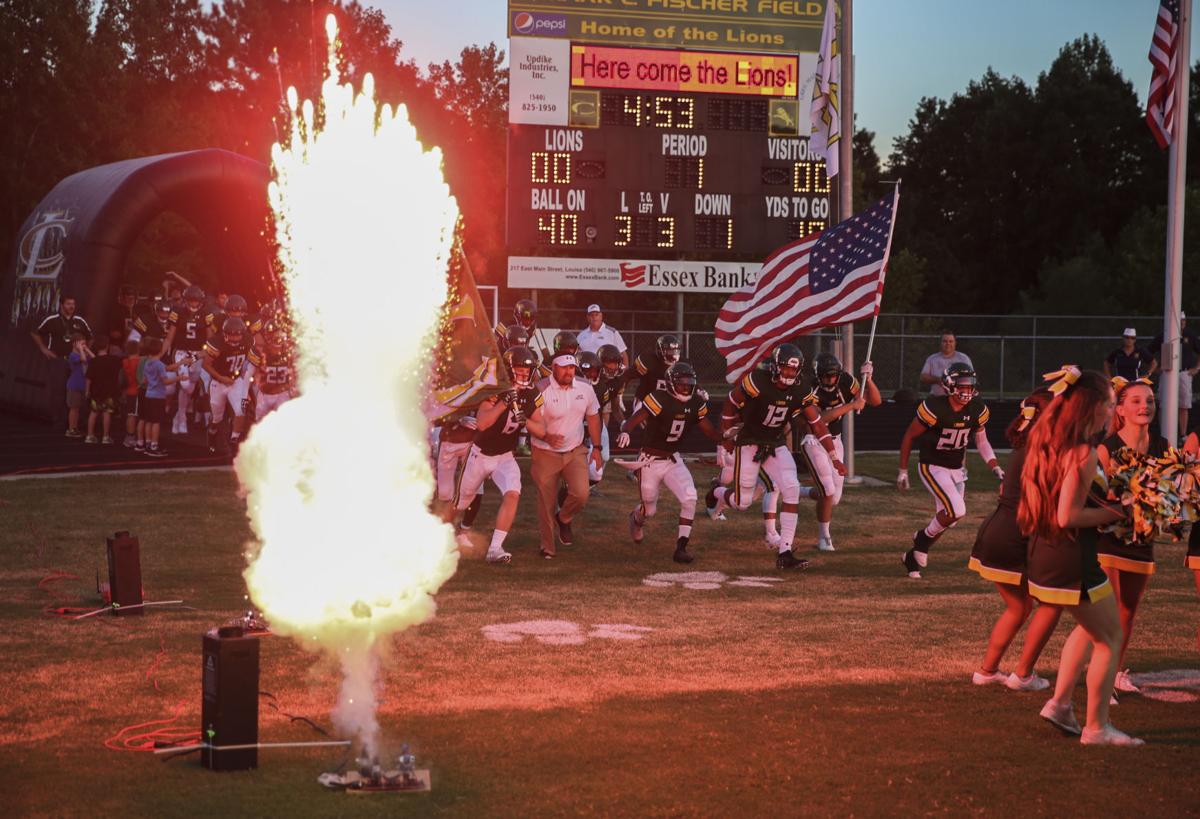 Fireworks greeted the Louisa football team as it took the field prior to a game last season. 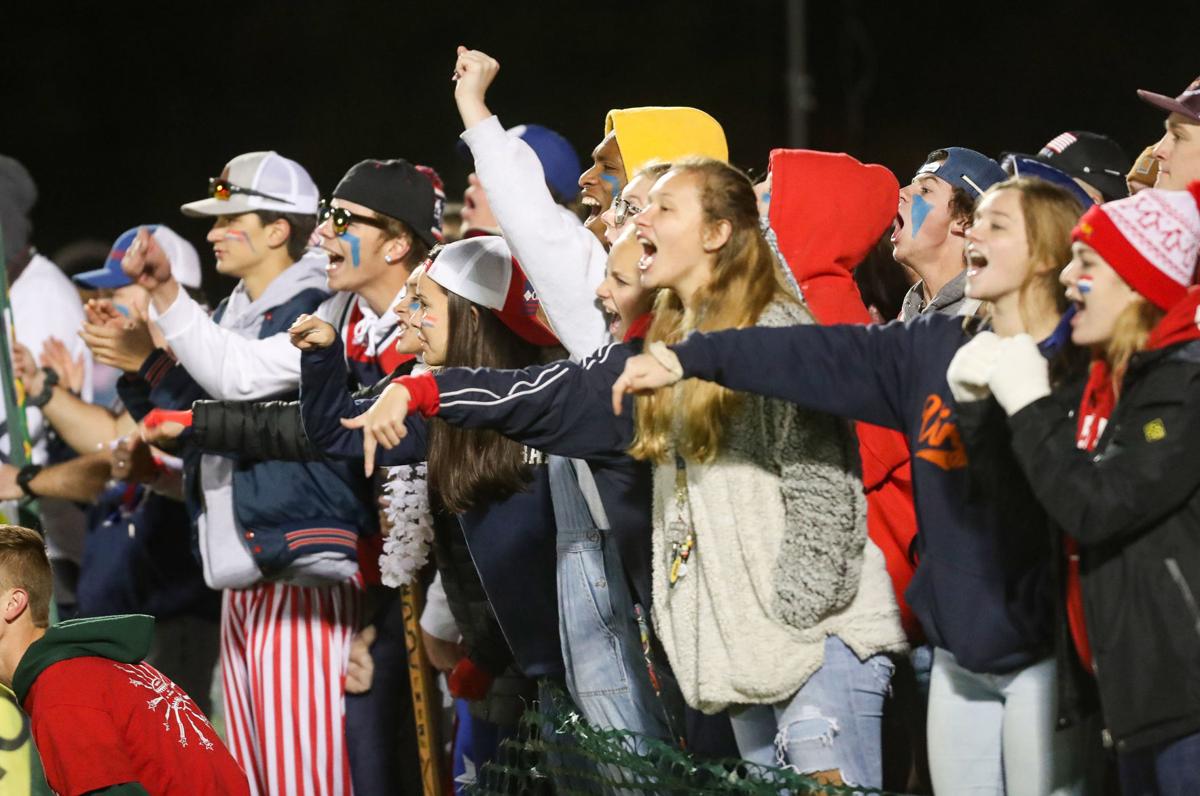 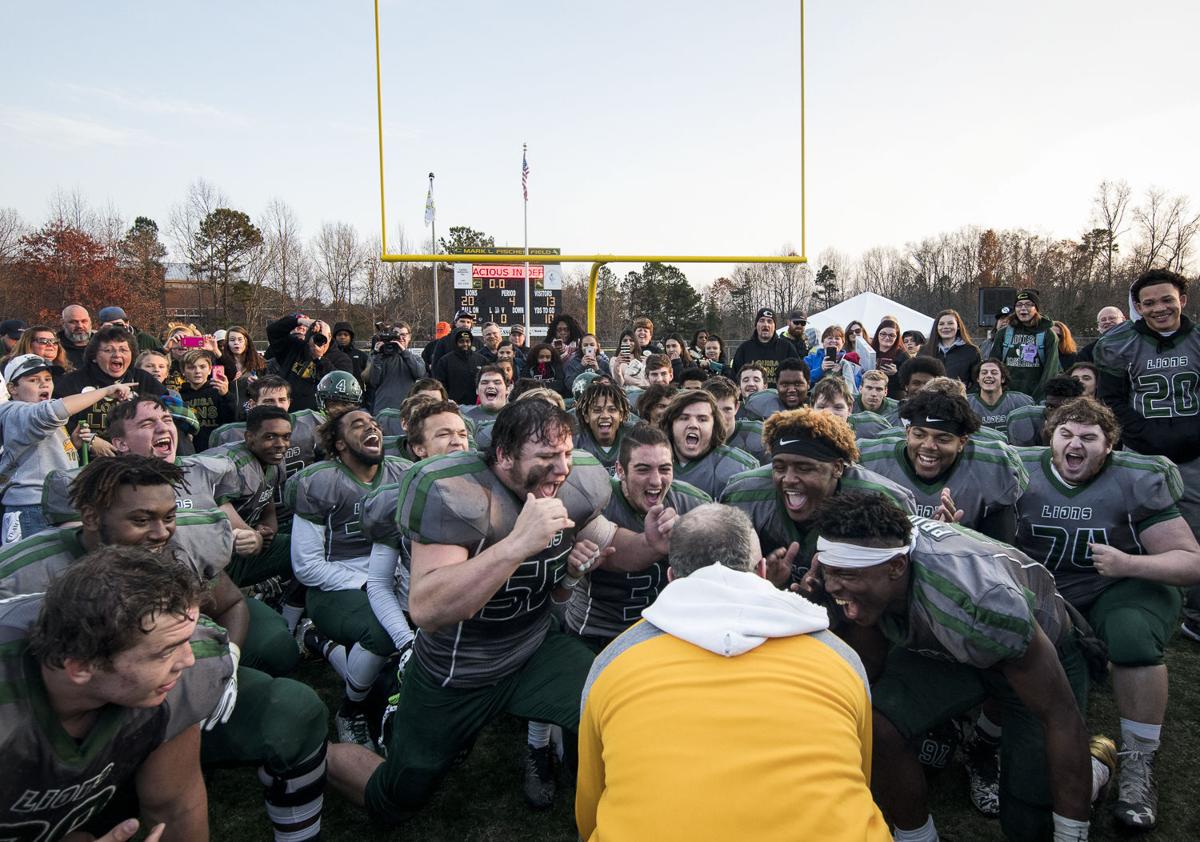 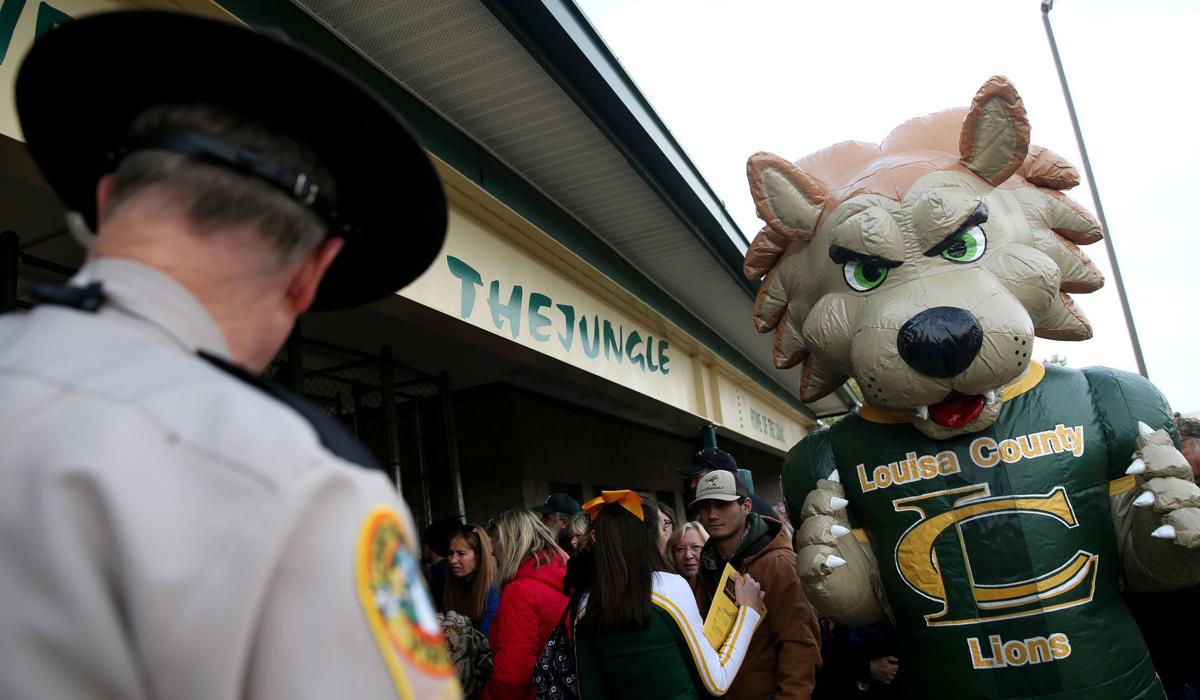 The Louisa lion mascot stands near the entrance to the stadium ahead of Louisa’s match up against Lafayette on Saturday. Louisa hung on to a lead to beat Lafayette 20-13.

MINERAL—The faithful flock here in droves, their loyalties as fierce as the flesh-and-blood lions who once kept watch over the sidelines.

But on this night “The Jungle” is quiet. It’s approaching 7:30 p.m. on what would’ve been the final Friday of the regular season, and the four ticket booths that would together serve a few thousand sit shuttered.

Inside, the bermuda grass playing surface is unseasonably pristine, unperturbed by the treading and tackling of burly teens. Without pollution from stadium lights, constellations stretch from goal post to goal post across the horizon.

Absent are the skydivers and pyrotechnics and of, course, the main attraction: Louisa County High School football. In July, amid the coronavirus pandemic, the Virginia High School League voted to delay all fall sports until February.

The resulting void has been felt statewide, but perhaps nowhere as acutely as Mineral, where Friday nights take the form of a religious revival with shoulder pads.

“It’s sort of like the circus and church all at once,” said Joe White, who owns Joe-Joe’s Superheroes, a pizza and sub joint in town.

Will Patrick was stumped. After nearly 25 years as a player, assistant and now the Lions’ head coach, he’s not sure how folks in his hometown are spending their Friday nights.

“Hopefully everyone’s social distancing and we can get this COVID under wraps sooner rather than later,” he said after a pause. “I don’t know. It’s a great question, to be honest with you. Friday nights under the lights in Louisa have always been the thing to do.”

Tommy Nelson, who has been calling play-by-play for Louisa games since the 1980 season, could think of only one silver lining.

“It means traffic is easier,” Nelson said with a chuckle.

But it’s no laughing matter for local businesses, who count on a half-dozen Friday nights in the fall to bolster their bottom line. While the far bigger economic impact has been the COVID-19 pandemic, White has still noticed a difference from past autumns.

On home game nights, the rush “would pretty much be all night long, from say, 3:30 p.m. until 8 o’clock when we closed,” he said. “We got a lot of visitors, once they stopped here and played.”

No football has had a similarly deleterious effect on LCHS’s athletic coffers. During the regular season, schools keep 100 percent of the home “gate,” or ticket sales. Patrick and Louisa athletic director George Stanley estimated attendance at between 2,000 and 3,000 fans per game. At $6 a ticket, that means approximately $90,000 of revenue will have been lost by season’s end.

The social impact can’t be understated, either. Louisa games are known as family affairs: seas of jersey-wearing parents with green and gold-clad toddlers in tow. If you make the rookie reporter’s mistake of arriving within 30 minutes of kickoff, try parking at the nearby public library.

Long before he became a first-team All-Area running back for the Lions, Jarett Hunter was one of those wide-eyed tykes. From the big crowd to the big cats, the atmosphere was intoxicating.

“It was like going to a big city,” said Hunter, now a freshman football player at Howard University.

In the hallways and classrooms of Louisa County High School, Fridays in the fall generated a different sort of energy. Pep rallies, in a sense, were redundant.

“We had class, but it was just so limited because half the class was making signs for the big game,” Hunter said. “Even teachers are hyped up. We’re checking out film during class.”

For now, projecting what the next home game at Louisa will look like remains a purely academic exercise. The VHSL settled on a condensed football season that begins in February. Teams are expecting six games, plus playoffs, under the so-called “Championship +1” format.

Fan attendance will be capped at 250, a far cry from the thousands accustomed to making their Friday night pilgrimages for the past 15 or so years since late coach Mark Fischer restored the program to prominence. In 2017, Fischer’s final year at the helm, the Lions reached the Class 4 state championship game; they’ve won 32 consecutive regular-season contests dating back to 2016.

Sure, the Jungle is quiet for now. But lions don’t hibernate; in fact, they’re known to prey most fiercely during the winter months.

“The question I get is: ‘When are y’all going to play?’ ” Patrick said. “That’s probably the No. 1 question I get when I’m out and about in the community. I tell them, ‘hopefully soon.’

“I tell them 2021 is going to be an amazing year. We’re going to have two football seasons within 10 months.”

The Lancies: Gather around our socially distanced roundtable

By any measure, this will be a different Thanksgiving.

Shawn Asbury’s favorite cornerback in this past year’s NFL draft class was Jeff Okudah. So when Okudah, now a member of the Detroit Lions, pos…

PLAY OFF: Riverbend has big plans for two-way standout Fisher

Shawn Asbury’s favorite cornerback in this past year’s NFL draft class was Jeff Okudah. So when Okudah, now a member of the Detroit Lions, pos…

PLAY OFF: Chancellor's Edwards won't pass on final opportunity to make an impression

Instead of swinging a bat and firing groundballs to first base, Trevin Edwards was at his home gym getting bigger, stronger and faster for his final football season.

James Monroe cross country and track and field standout Ginny Beringer has orally committed to run at the University of Richmond.

Louisa players usually take the field for home games to plenty of pomp and circumstance, as they did before this 2017 state semifinal game with Lafayette.

Fireworks greeted the Louisa football team as it took the field prior to a game last season.

The Louisa lion mascot stands near the entrance to the stadium ahead of Louisa’s match up against Lafayette on Saturday. Louisa hung on to a lead to beat Lafayette 20-13.