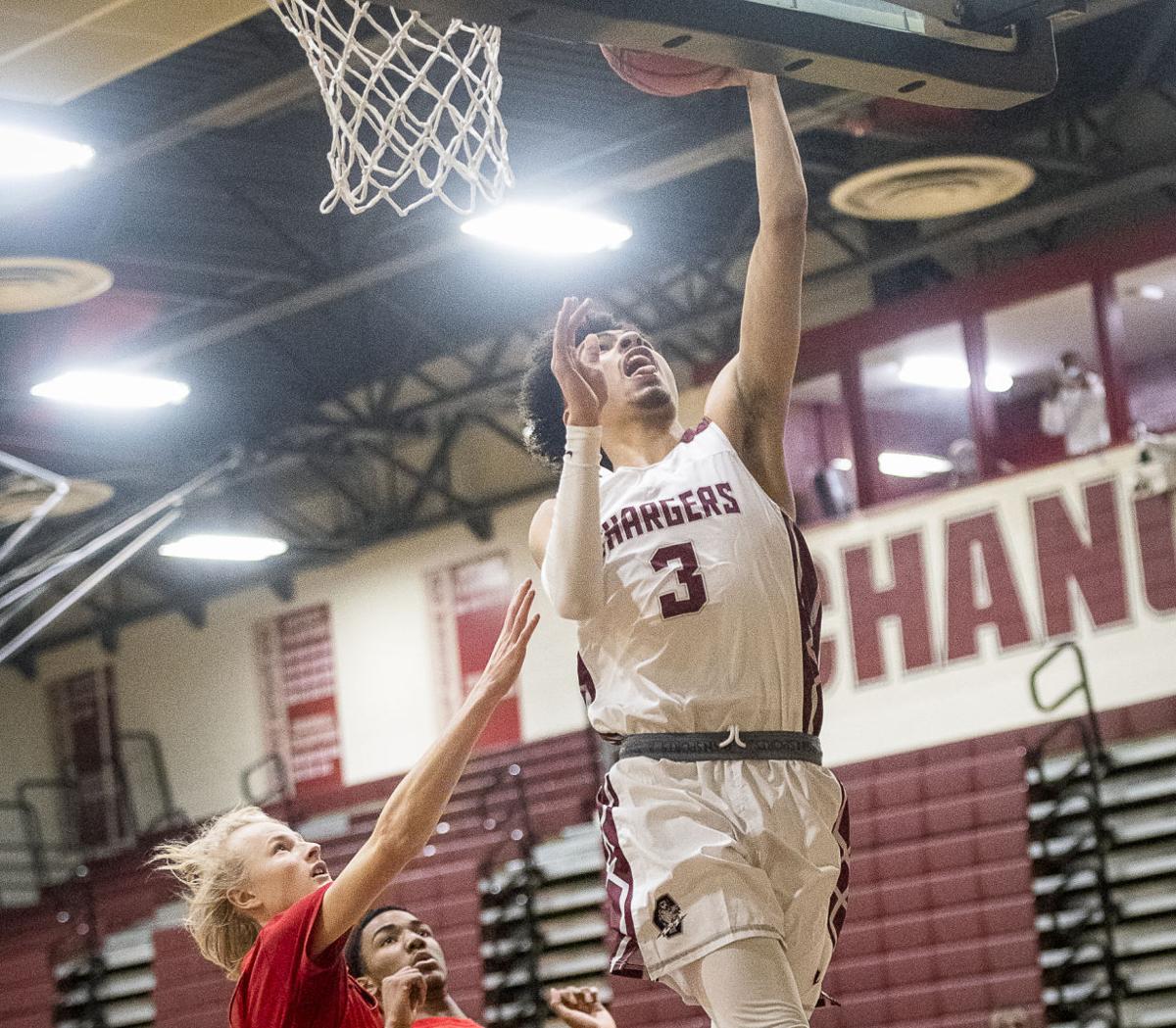 Chancellor’s A.J. Coghill (3) drives the lane for a layup in the Chargers’ victory Friday night. 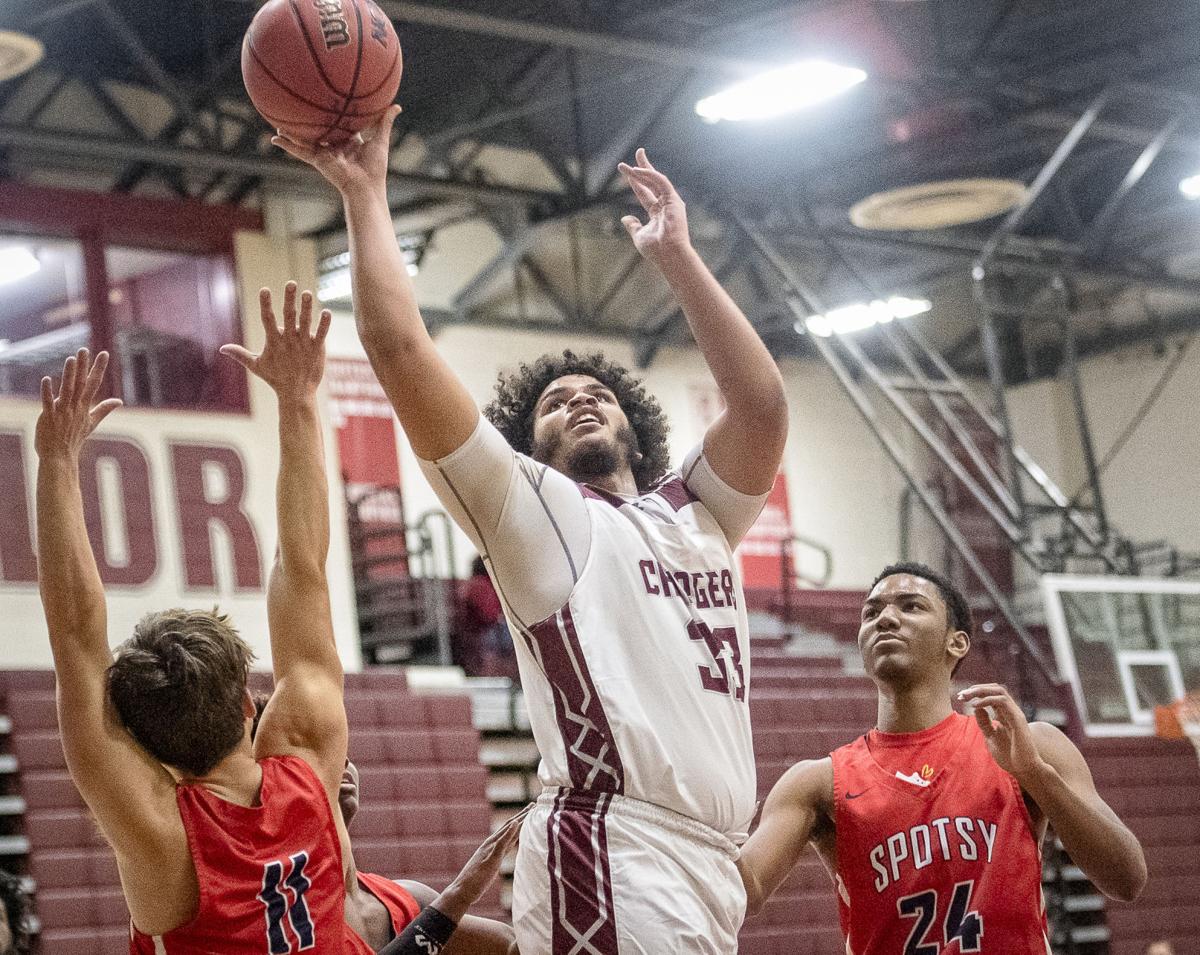 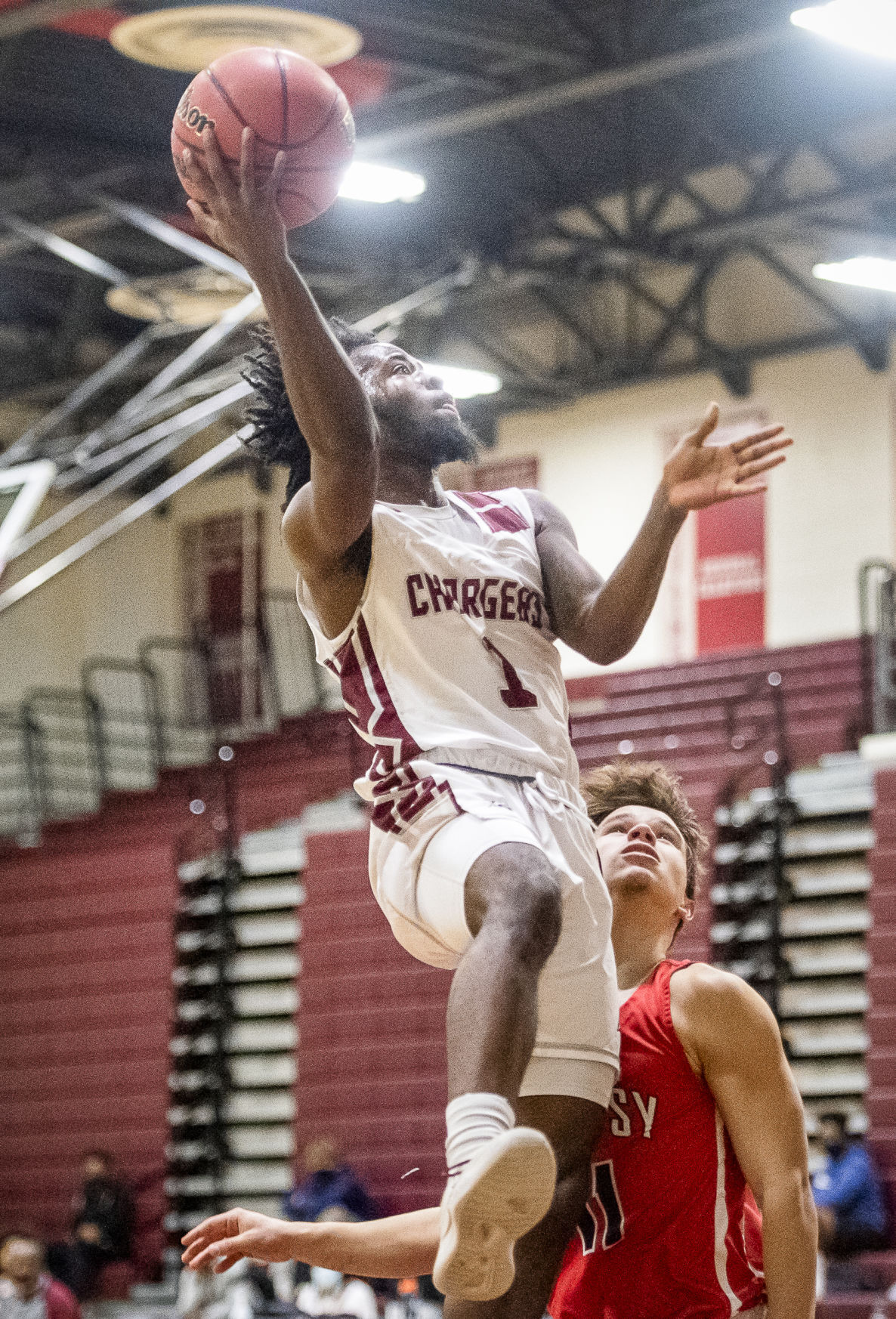 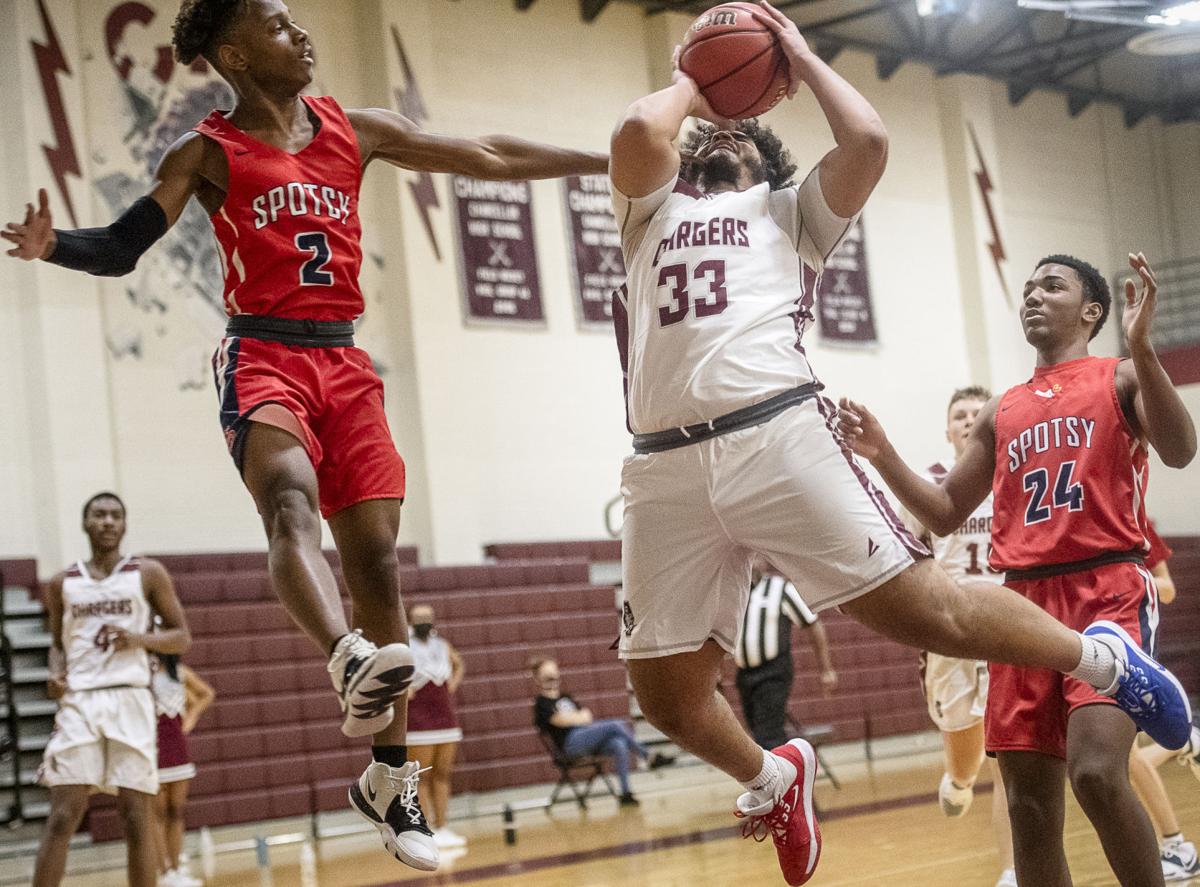 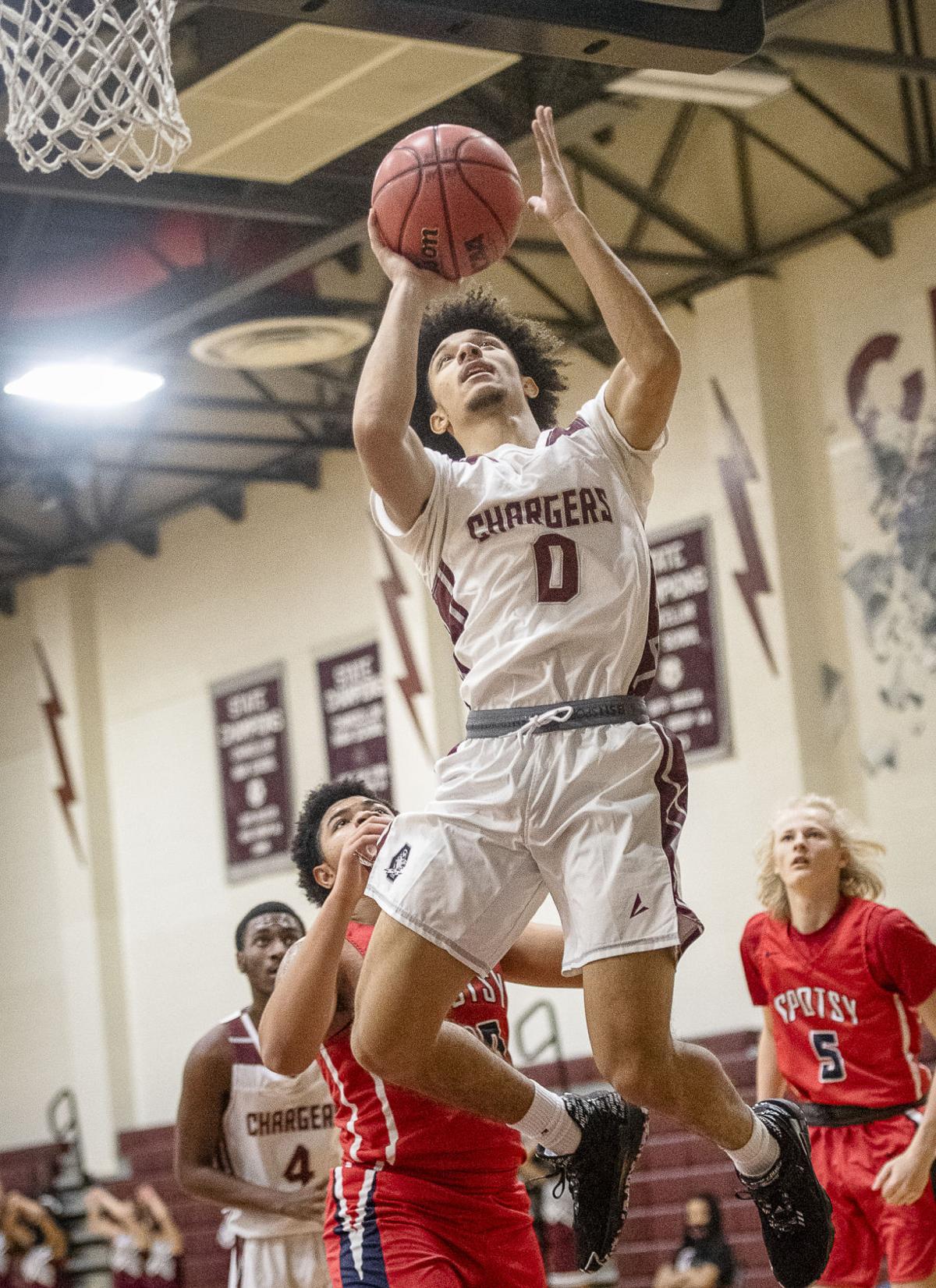 Chancellor’s Shane Batten (0) scores two of his game-high 21 points against Spotsylvania on Friday. 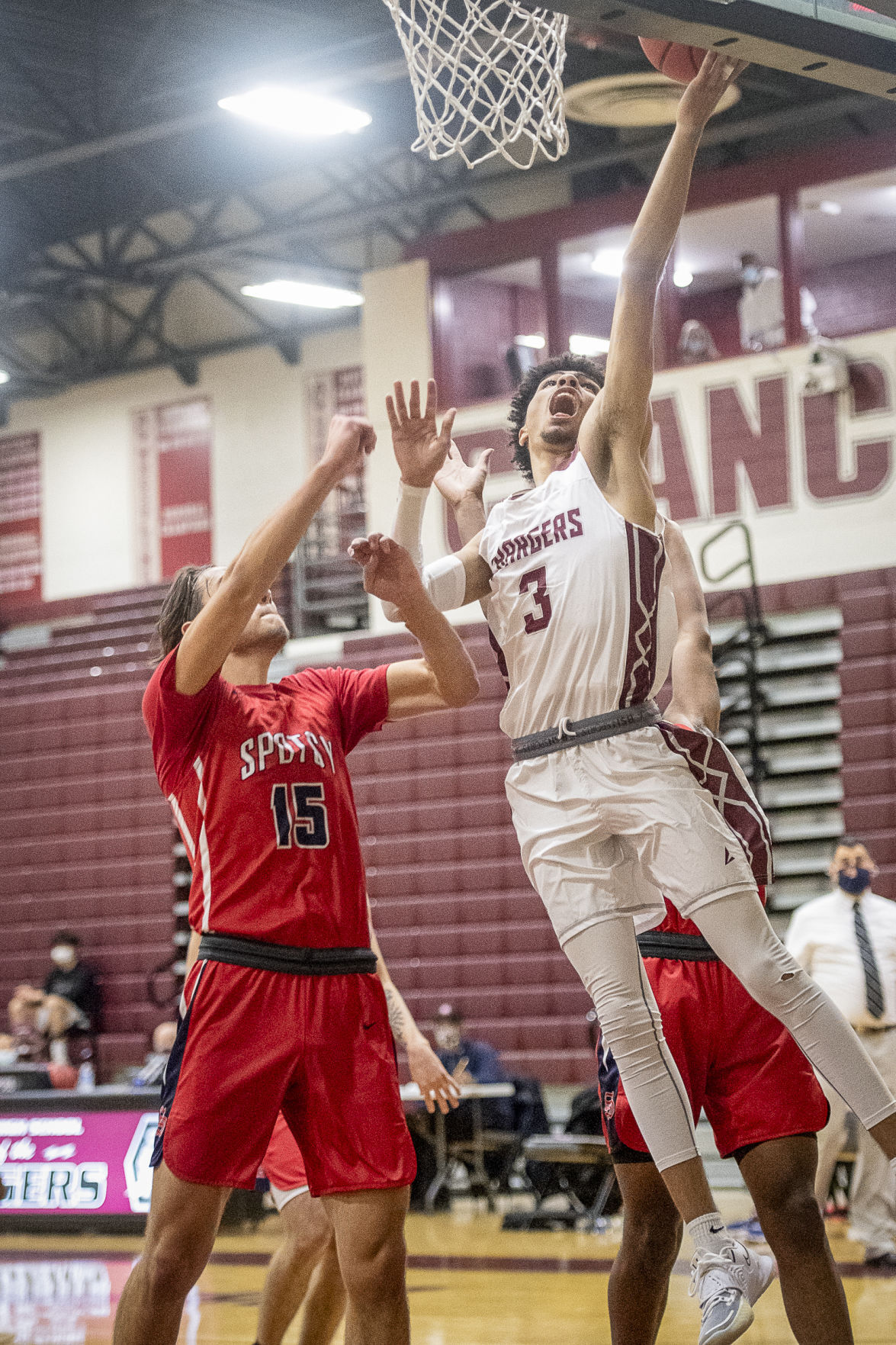 Entering last season’s playoffs, Chancellor boys basketball coach Craig Boothe was keenly aware of how opponents were keying in on senior Anthony Melvin. So the Chargers deployed Melvin as a decoy, and rode their ruse all the way to a Battlefield District tournament title.

“Shane [Batten] and A.J. [Coghill], they were the catalysts,” Boothe said. “Knowing that Isaiah was not going to be here, they knew they had to step up.”

It didn’t take long in 2021 for the duo to elevate their play.

Relying on a breakneck transition game and suffocating 2–3 zone, the Chargers opened up a 21–1 lead after an opening quarter in which they forced five Knights turnovers. Their lead expanded to 34–3 late in the first half.

Asked if he’d ever been part of such a lopsided opening sequence, Batten mulled the question for a moment before replying: “I don’t think so. But it really just started with defense, that’s what we’ve focused on this season.”

“Their team can go inside out,” Spotsylvania coach Michael Kartson observed. “They’re very tough to get after. We couldn’t match their intensity. You can’t sit out and just move the ball, they’ll just eat you alive.”

In addition to the play of Coghill and Batten, who rocked the rim with a first-quarter dunk, the Chargers (1–0) got nine points and nine steals from senior guard Ziggy Carter. The trio share Chancellor’s captaincy and are intimately acquainted with one another’s skillsets.

Carter is adept at penetrating the paint, while Coghill presents a coast-to-coast threat. Batten is probably the most natural scorer of the three.

“This is our fourth year, now we know each other’s game like the back of our hand,” Batten said.

“He’s a different factor on the boards,” Boothe said of Johnson, who added nine points. “We’ve got a presence inside again, that’s good.”

Nathan Widener had nine points to lead the Knights (0–3), who finally started hitting some shots in the third quarter to chisel away at their Venus De Milo-sized deficit.

“I think the guys really started to band a little bit more as a team and start to play off each other,” Kartson said.

Chancellor’s A.J. Coghill (3) drives the lane for a layup in the Chargers’ victory Friday night.

Chancellor’s Shane Batten (0) scores two of his game-high 21 points against Spotsylvania on Friday.