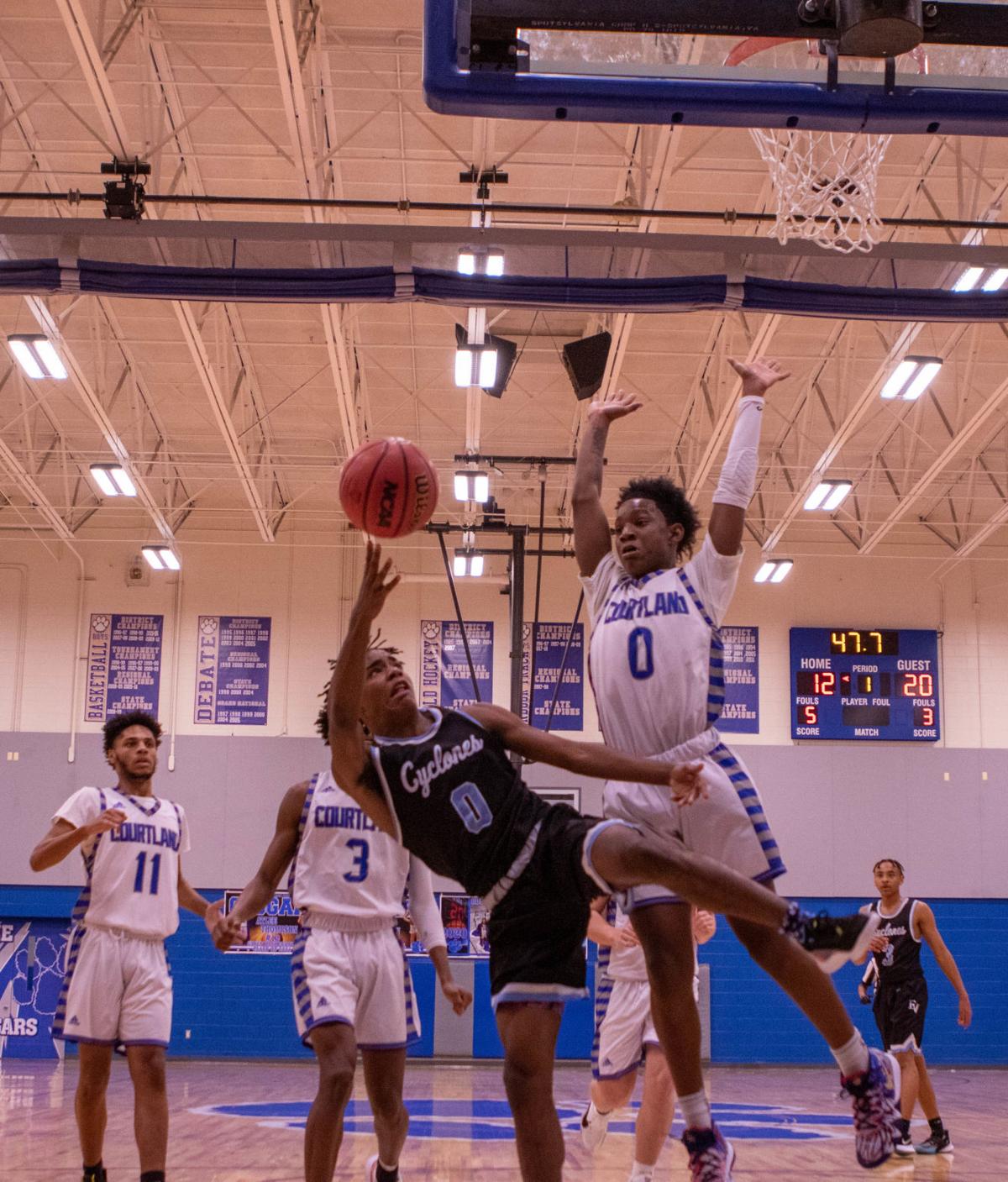 Eastern View’s Amaree Robinson (0, in black) puts up a shot attempt as Courtland’s Xander Alston (0, in white) defends during Monday night's game at Courtland.  The visiting Cyclones handed the Cougars their first loss of the season, 66-54. 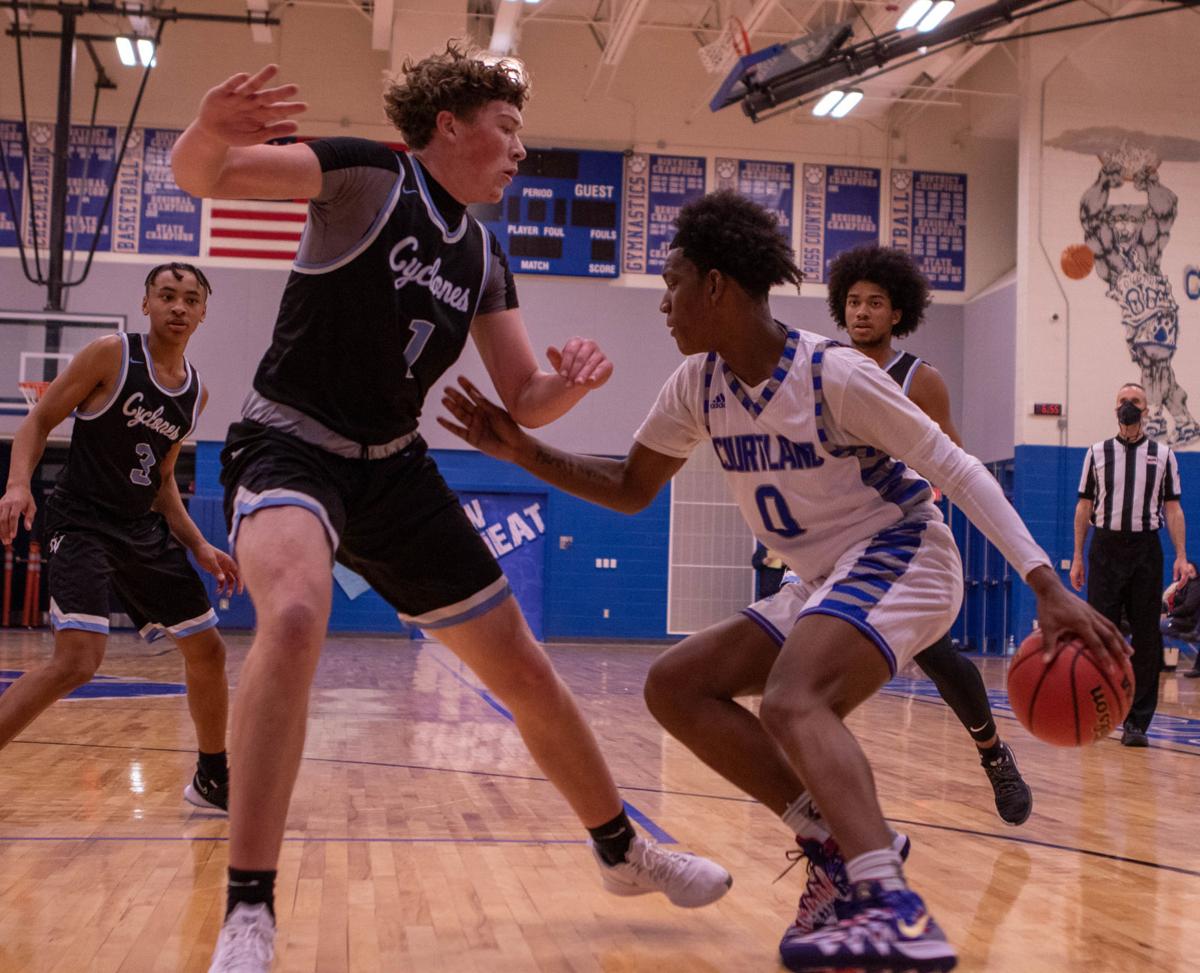 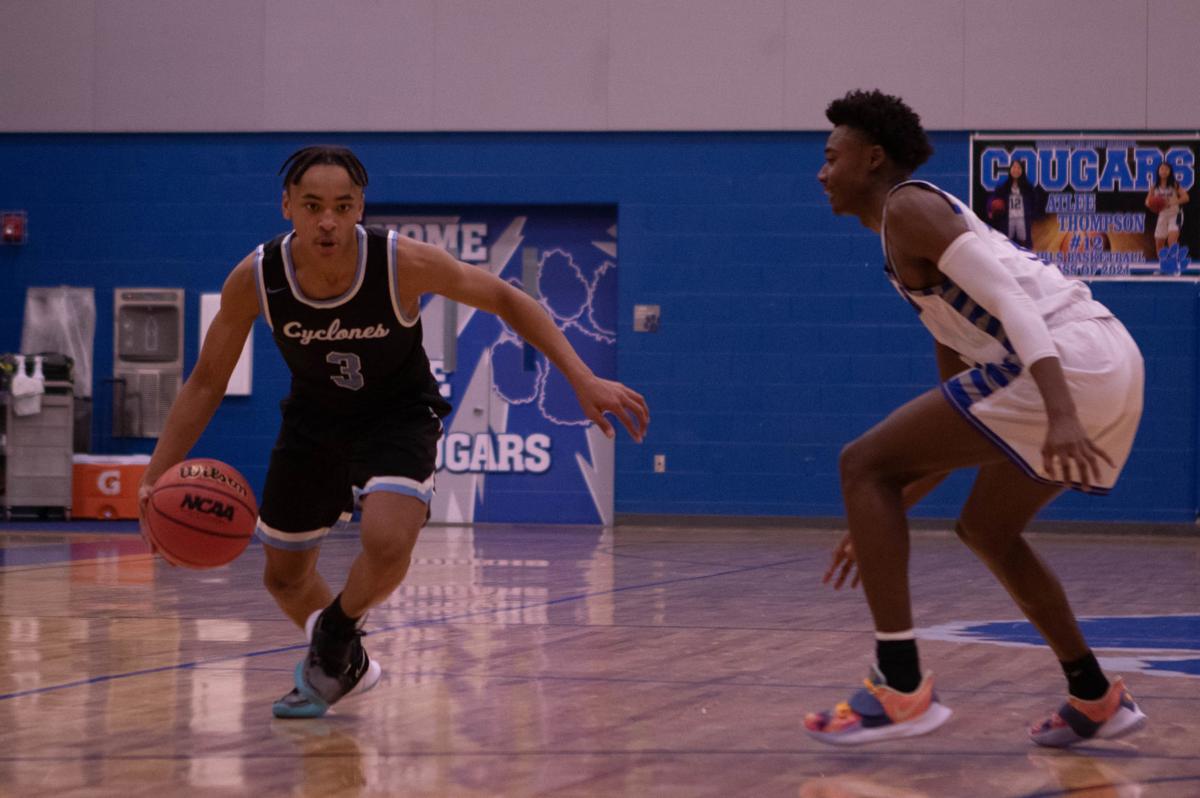 In that game, the Cyclones saw a 14-10 first-quarter lead evaporate in a hurry due to a bevy of missed layups and the Chargers’ outside shooting. Chancellor connected on 11 3-pointers in the contest, earning an easy 74-59 win.

Standing outside the visitors’ locker room after the game, Thornhill lamented his squad’s effort at both ends of the floor, calling for a “return to the drawing board.”

Whatever Thornhill drew up over the weekend made all the difference in Eastern View’s matchup with Courtland on Monday night, as the visiting Cyclones led from start to finish in a key 66-54 Battlefield District victory.

The win was a step back in the right direction for Eastern View (3-1 overall, 3-1 district), while the Cougars (3-1, 2-1) saw their perfect record go by the wayside.

“First of all, our intensity was much, much better [tonight] than it was at Chancellor,” Thornhill said. “The guys were dialed in both offensively and defensively right from the start of the game.”

At the very least, the Cyclones were dialed in from long range at the outset of Monday’s contest. They sank five 3s in the first quarter, blitzing the defending Battlefield and Region 4B champions for a 24-12 advantage. Junior swingman Rickey Butler made three of those, while freshman guard Amaree Robinson drained the other two.

Robinson benefited greatly from the hot start, riding it to a game-high 20 points.

“He has the capability to get on these hot streaks,” Thornhill said of Robinson, who finished the night with four treys. “Once one goes in, look out.”

Robinson, who comes off the bench but plays nearly the same amount of minutes as Eastern View’s starters, hadn’t scored more than eight points in any of the Cyclones’ first three games. He said that wasn’t for lack of confidence, however.

“I’m used to playing against people older than I am because I’ve been playing with my dad and uncles for years,” he remarked. “When you’ve been going against older, bigger bodies, you don’t have any fear playing varsity basketball [as a freshman].”

The 6-foot-5 Butler, who ended up with 17 points and nine rebounds, added that he was surprised just how hot he and Robinson both started the contest.

“I wasn’t expecting us to come out on fire the way we did,” he said. “But it felt good to have those shots fall early, and it put [Courtland] up against a wall.”

Courtland was never able to get closer than nine points after the opening stanza. Senior swingman Robert Harvey came off the bench to pace the Cougars with 12 points, while sophomore guard Aaron Brooks chipped in 11.

“You have one or two of these games every year where you’re just flat the entire time,” Courtland coach Eric Davis said. “I thought [Eastern View] played really well, and we just didn’t shoot the ball well at all from the field or the free-throw line.”

Eastern View’s Amaree Robinson (0, in black) puts up a shot attempt as Courtland’s Xander Alston (0, in white) defends during Monday night's game at Courtland.  The visiting Cyclones handed the Cougars their first loss of the season, 66-54.