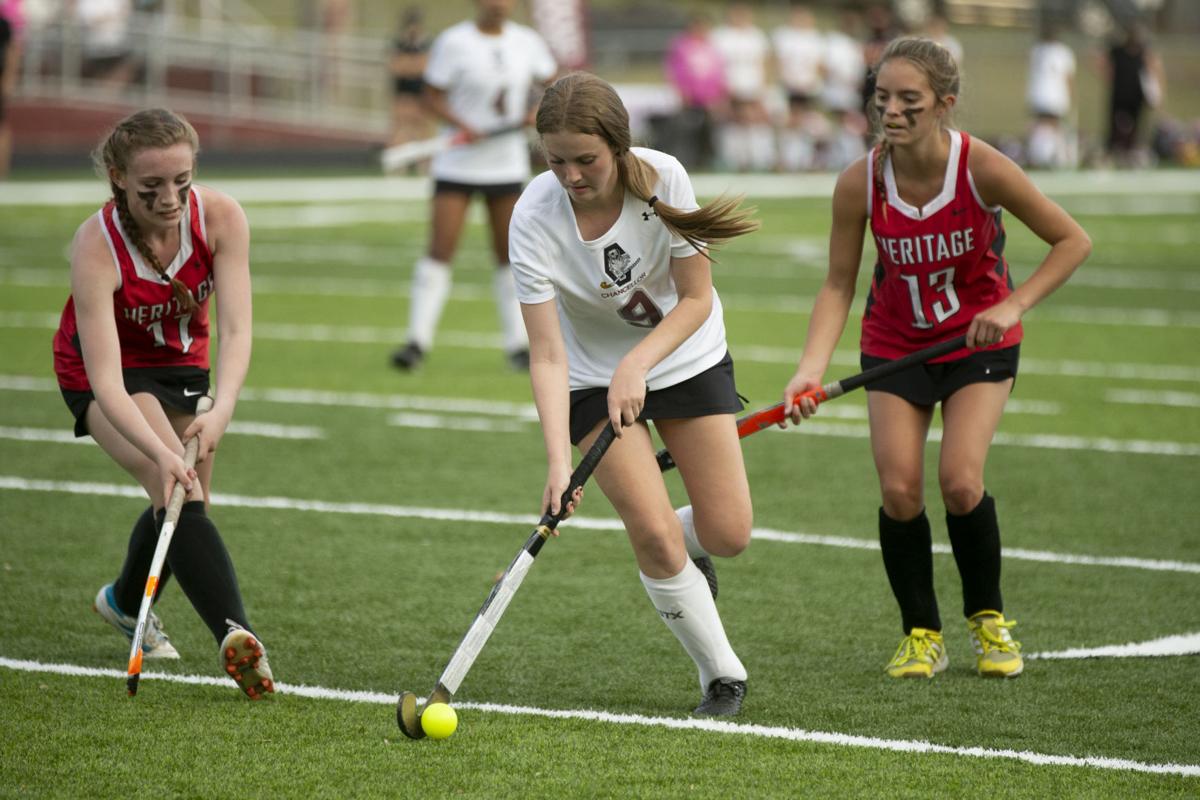 Chancellor's Caitlyn Bergmann makes her way past Heritage defenders during the Class 4 field hockey semifinal at Chancellor High School in Spotsylvania, Va. on Tuesday, April 20, 2021. Bergmann scored one of the Chargers' goals in their 2-1 victory. 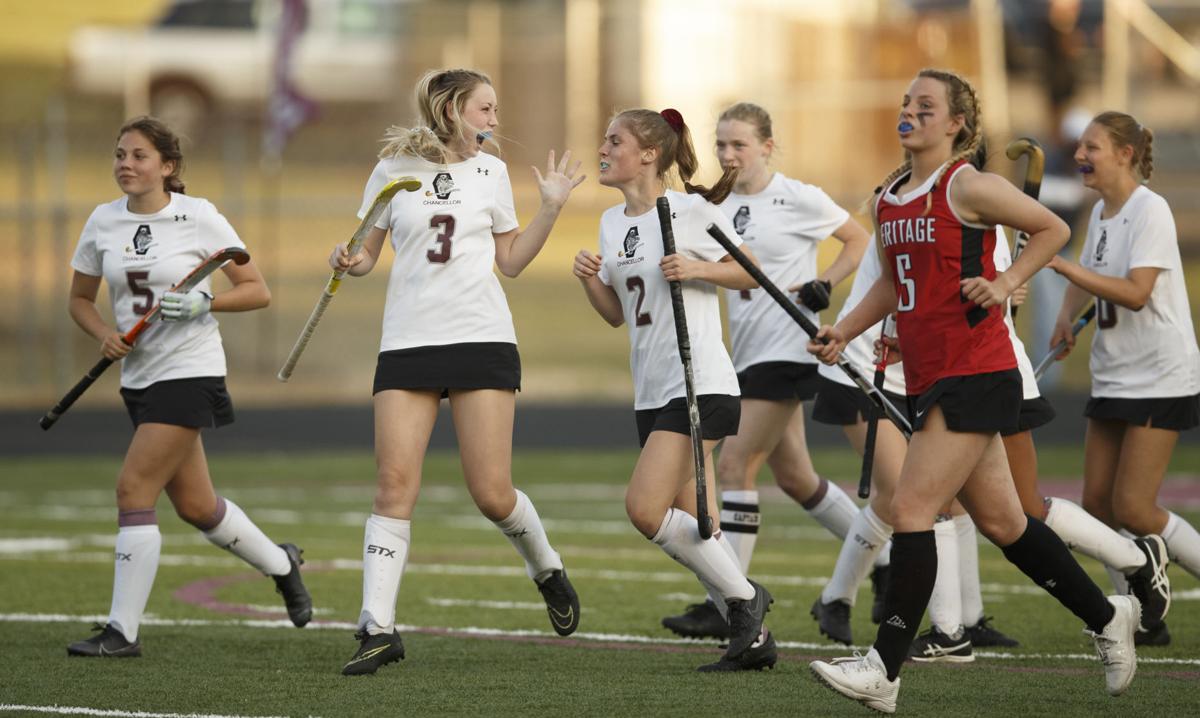 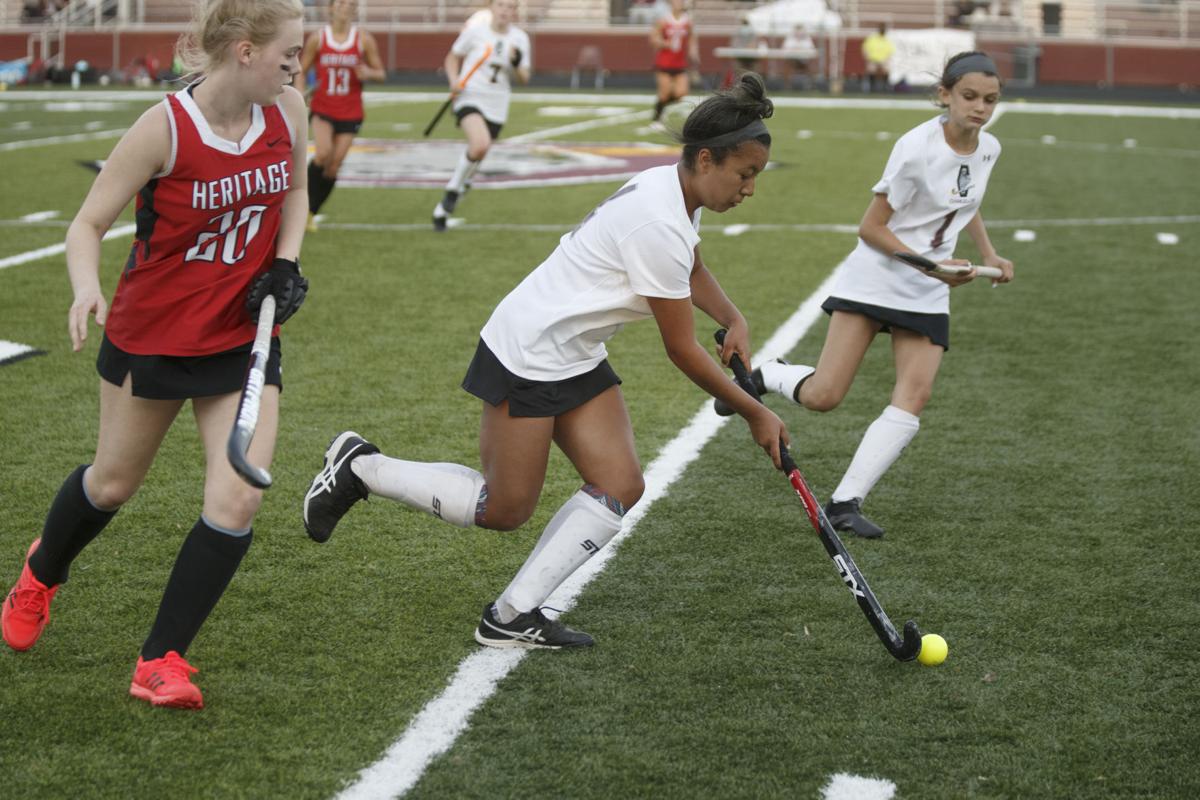 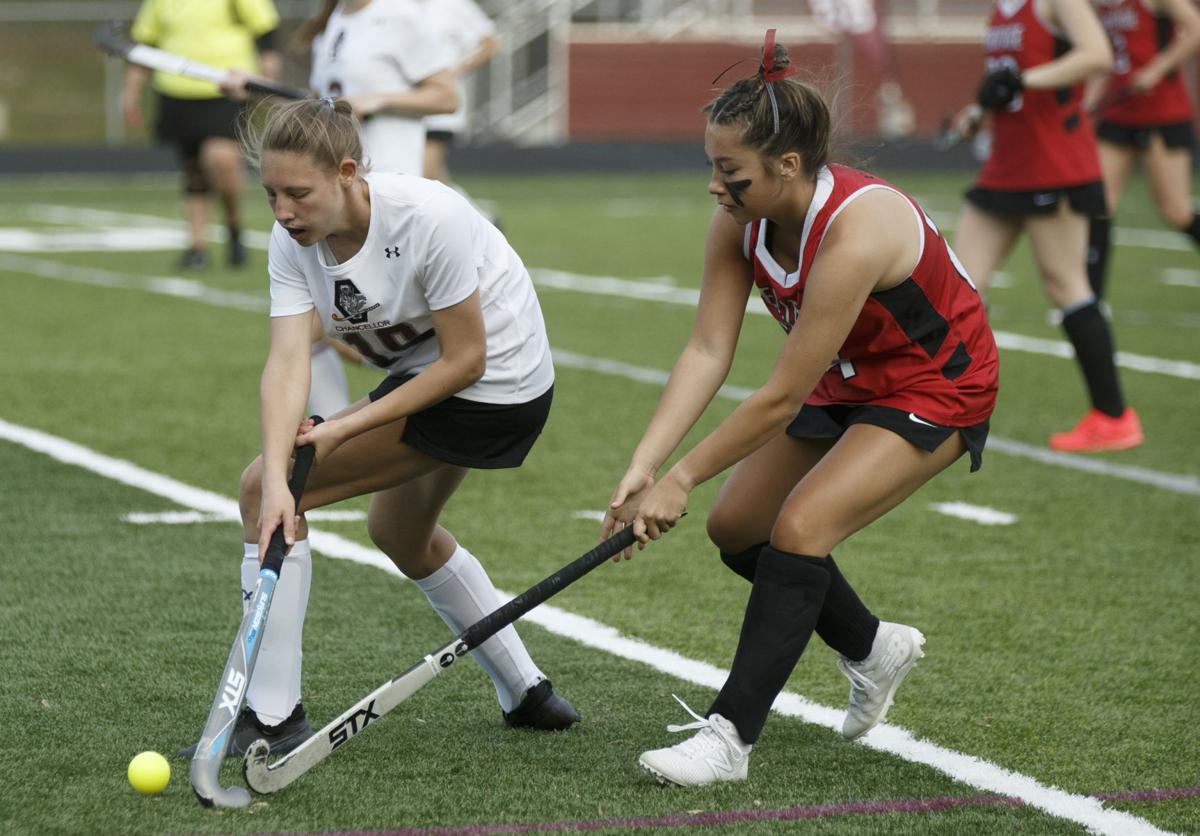 Chancellor's Eleanor Byram gets to the ball ahead of Heritage's Kenedi Brundage during the Class 4 semifinal at Chancellor High School. 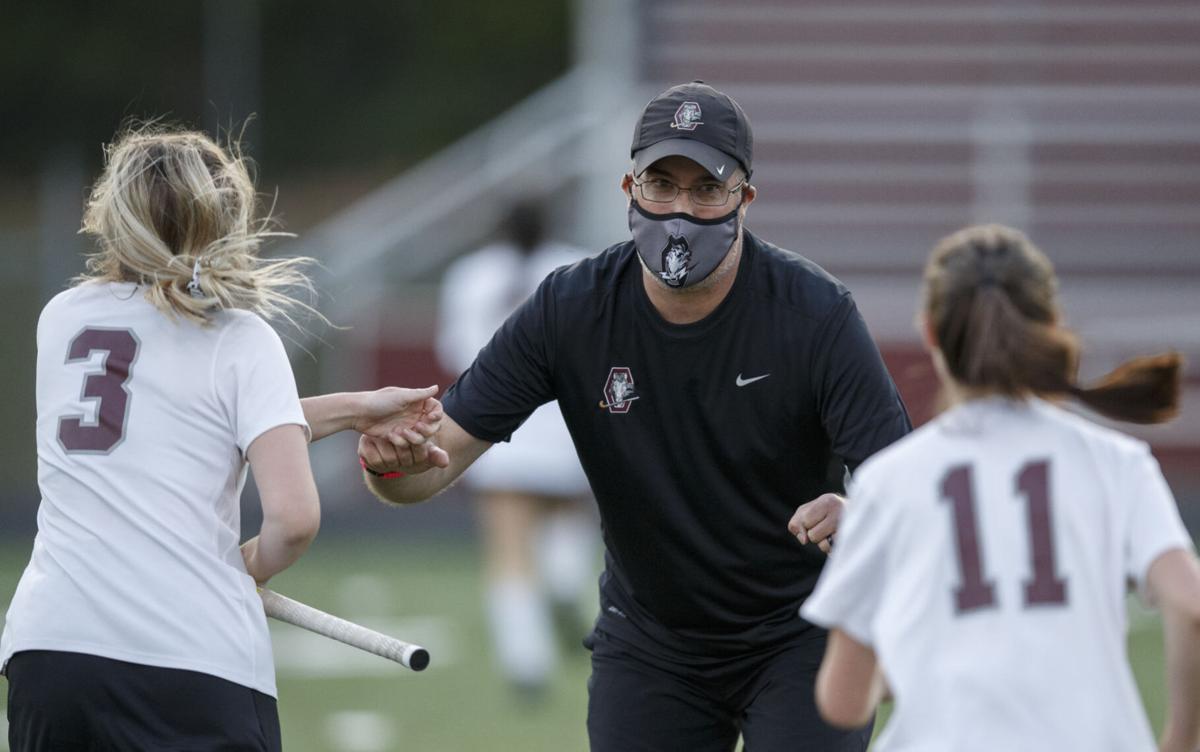 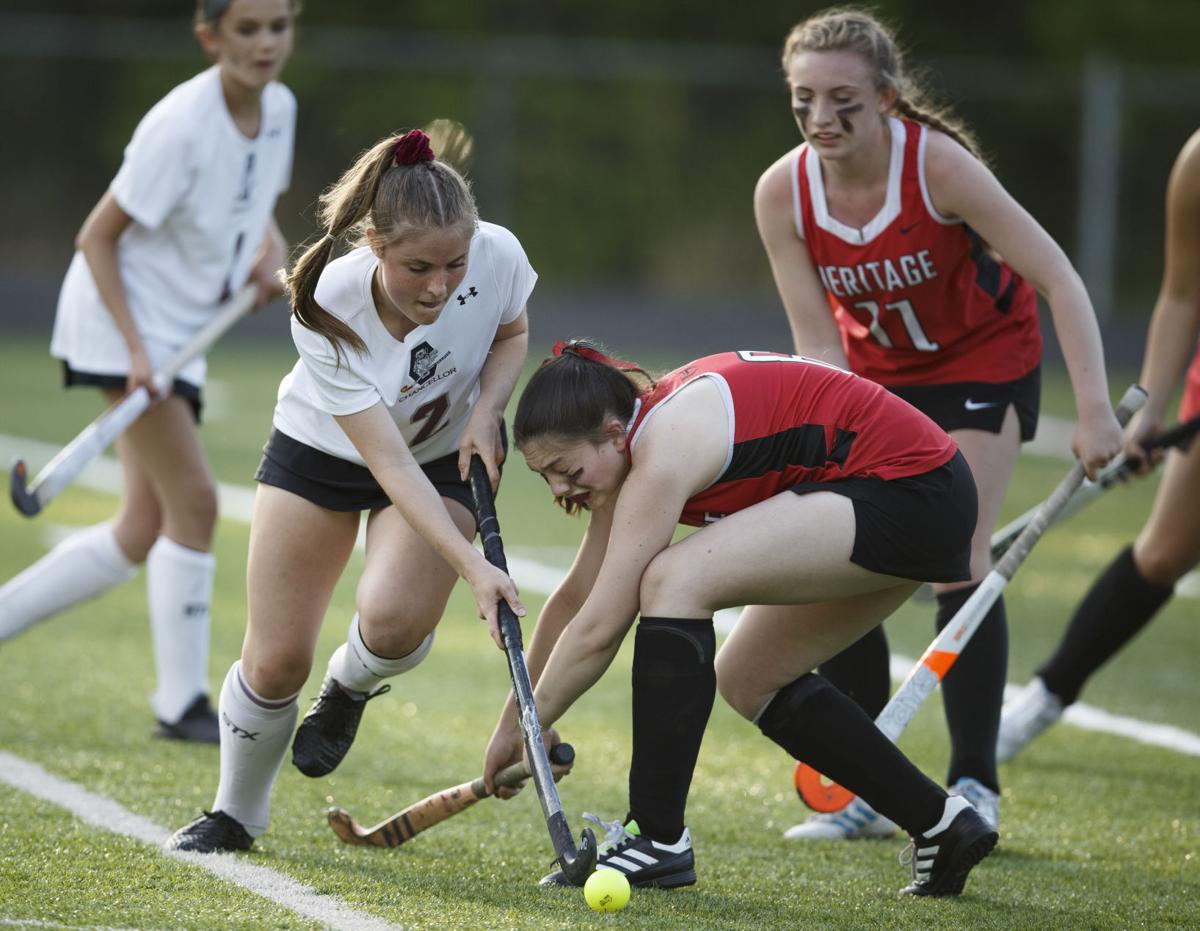 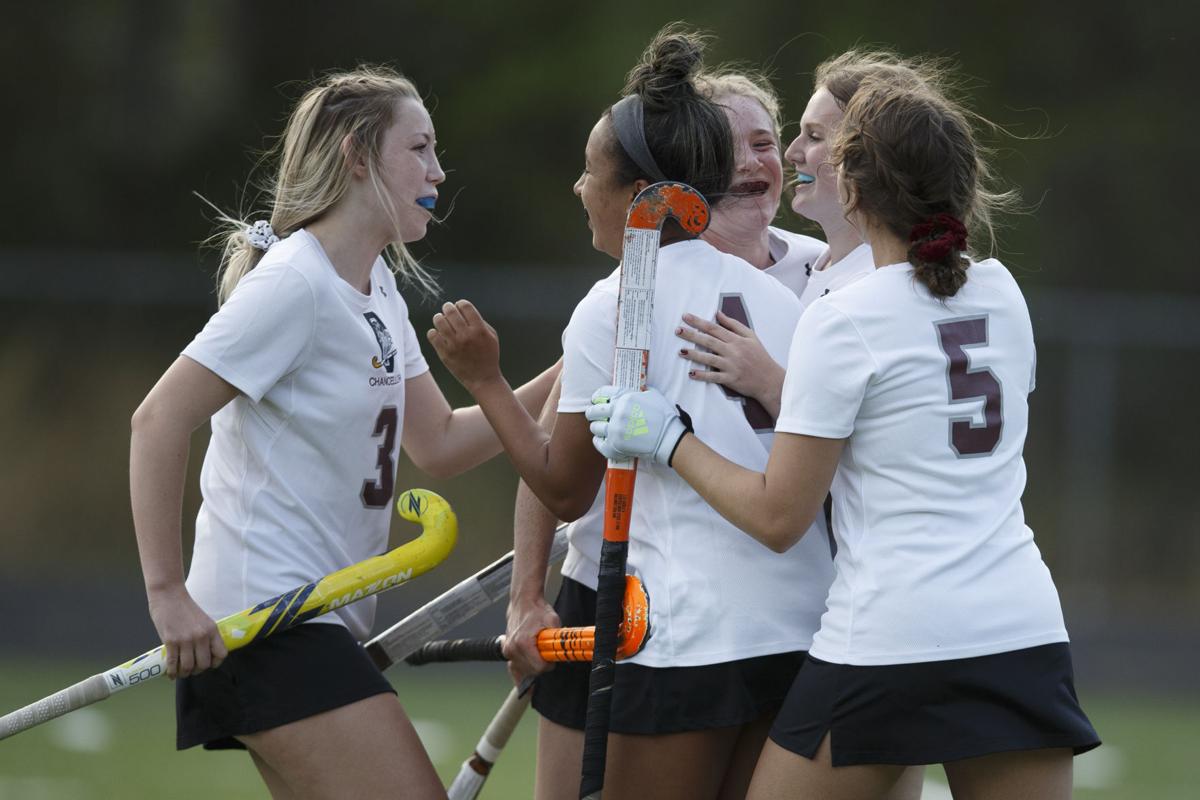 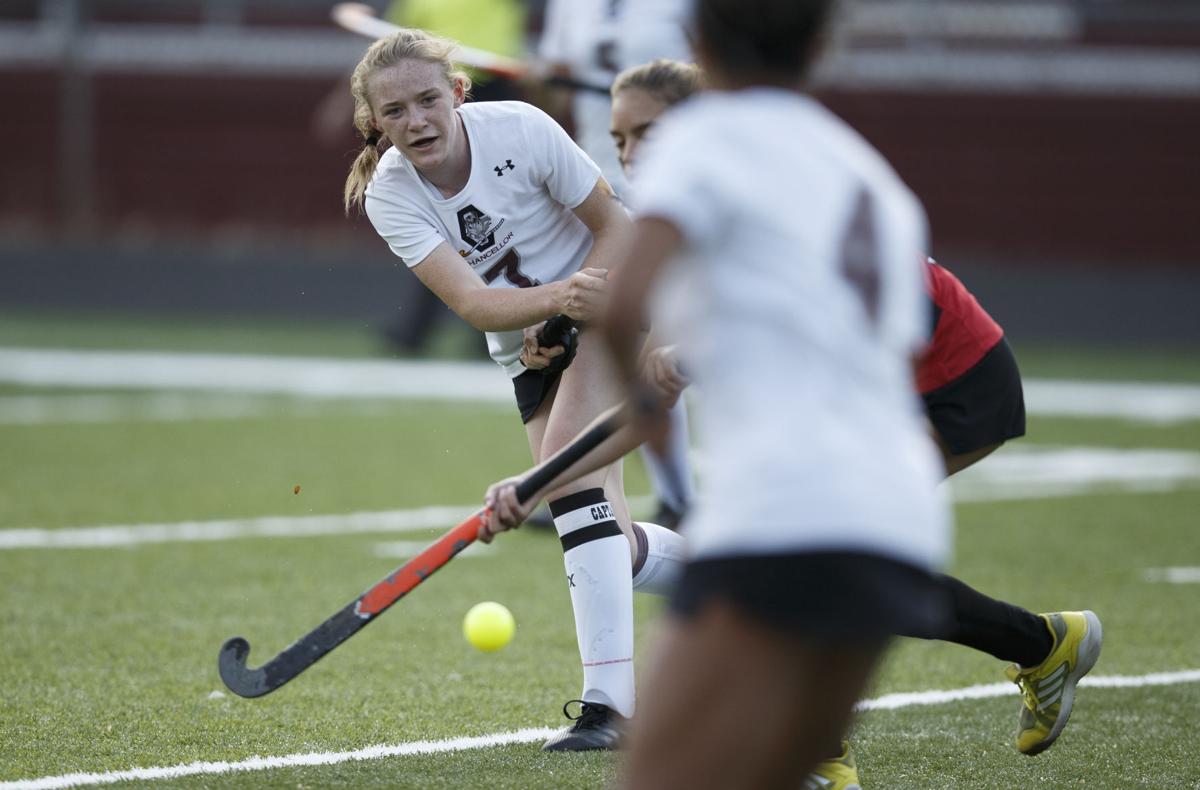 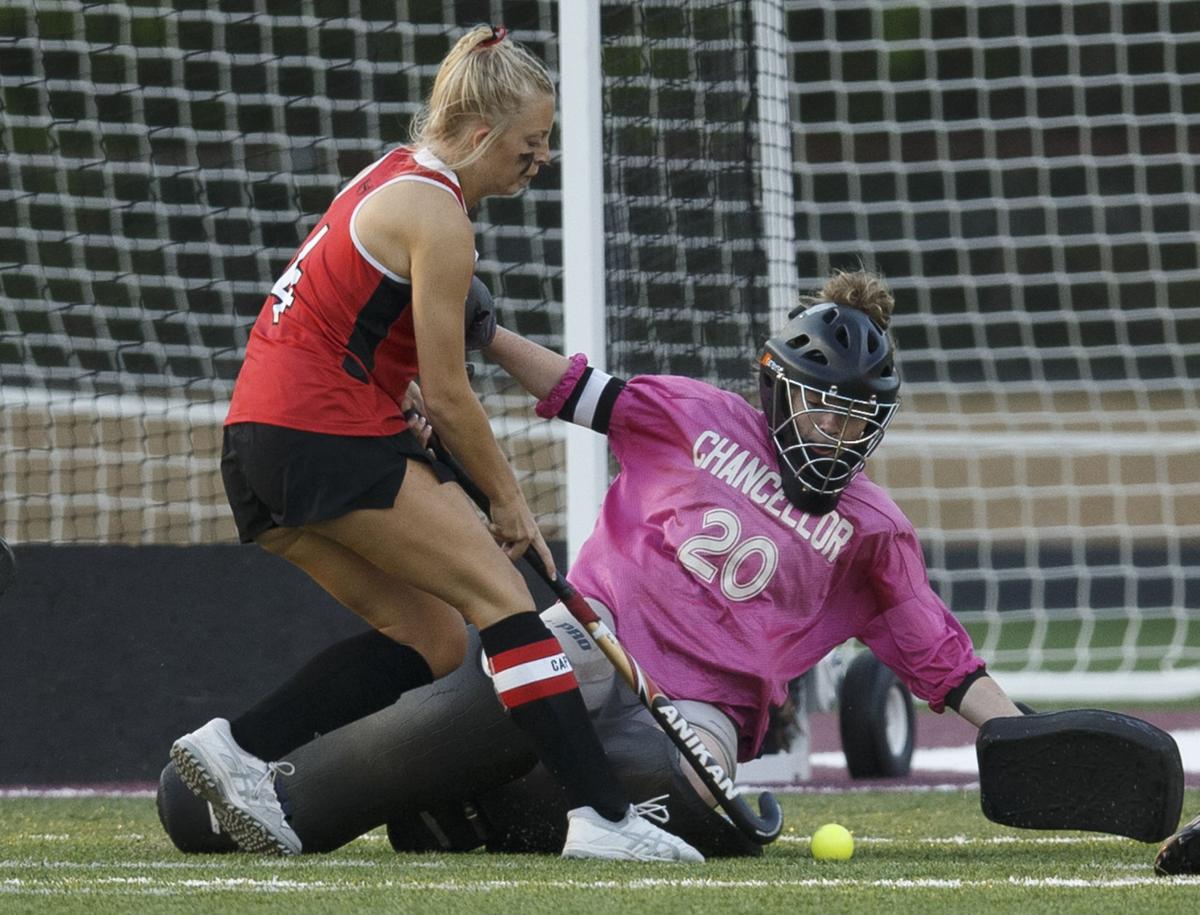 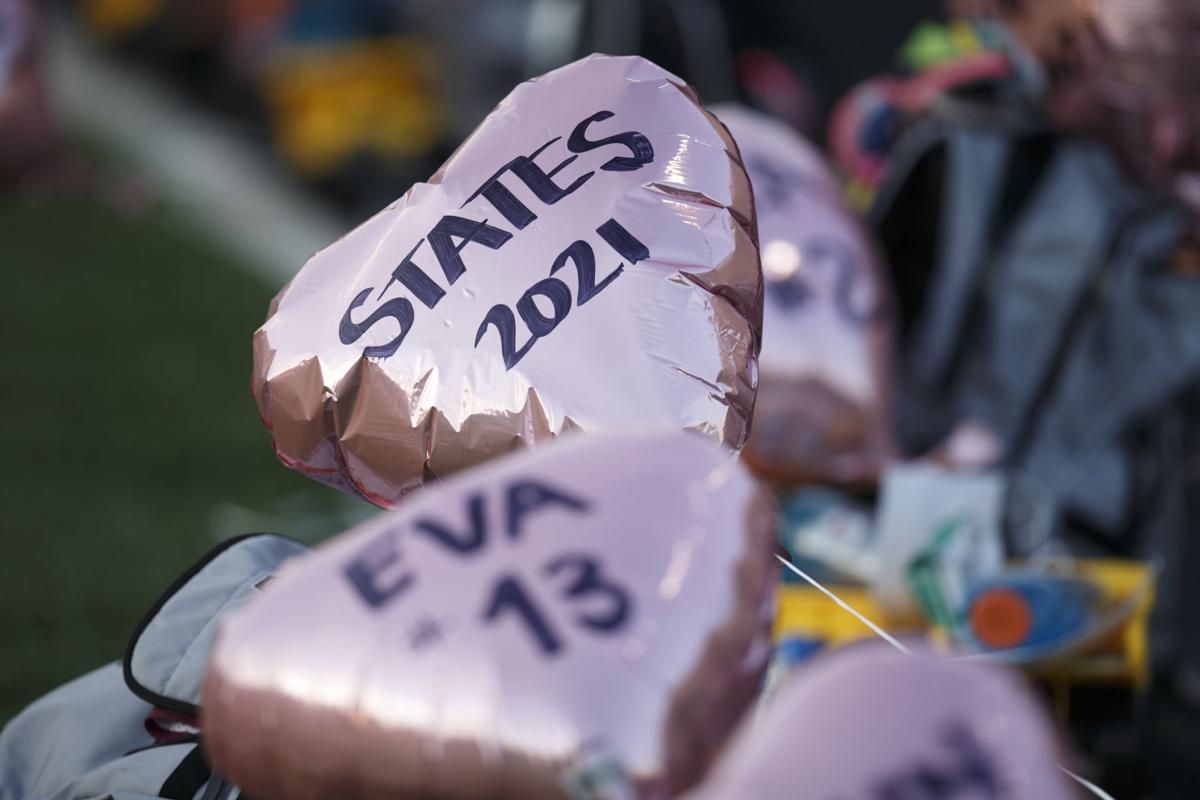 The fast start didn’t lead to a comfortable win, however, as Chancellor built a 2–0 lead, then had to work hard late to get a 2–1 win and advance to Saturday’s state final.

One thing was missing from Larkin’s plan in the early going: the ball going into the cage. At least until the hosts took advantage of their sixth and final corner of first quarter.

Erin Dameron inserted the ball to Kaitlyn Bestick at the top of the arc. Bestick paused, then slipped a pass to her right to Ashley Coleman. Coleman’s shot deflected toward the end line where Caitlyn Bergmann was waiting to stake the Chargers to a 1–0 lead with 28.5 second left in the frame.

While the Pride (9–5) rarely entered the Chargers’ half with control of the ball, Chancellor squandered several opportunities to double its advantage.

“I was hoping that we could capitalize early. We got one, but we had so many more chances at the beginning,” Larkin said. “The further we go, the teams get better and better, and when you don’t finish those opportunities early they can come back to haunt you.”

While the Chargers (8–3) wasted early chances in the first half, they didn’t follow suit in the second, adding a second goal 3:17 after the break.

Chancellor worked the ball deep into the Heritage end and junior Eleanor Byram collected the ball near the end line and worked her way toward goal. Her shot was blocked by a defender but squirted through toward the goal line.

Ella Newman wasted no time pouncing on the loose ball, pushing it home to give the Chargers a 2–0 lead.

The score seemed to give the Pride a lift. With the game on the line, they didn’t drop their heads but instead picked up their intensity.

With more Pride energy came some pressure of their own, resulting in Heritage’s first shot on goal of the game with 4:51 left in the third stanza.

The first shot only brought the first save of the game for Chargers’ goalie Regan Bestick, who slid out aggressively to knock the ball away to help her side maintain its two-goal cushion heading into the fourth quarter.

Three minutes into the final quarter, Heritage top scorer Catherine Beal got onto the end of a loose ball in front of the Chancellor goal. Bestick, however, was once again up to the task, deflecting the forward’s shot just outside the right post.

Those saves turned out to be even more important when the Pride finally did break through.

After Bestick denied another close-range shot from Beal, Heritage’s senior Lindsey Blythe slotted the ball into the vacated cage, making it 2–1 with 10:38 left in regulation.

Without Bestick’s earlier saves, twin sister Kaitlyn said the Chargers might have been in trouble.

“They were absolutely huge. That game is a very, very different game if they put more than one of them in,” she said.

With the game on the line, the Chargers were able to recover and close out the win, setting up a rematch at Great Bridge (9–1), a 6–0 winner at Warhill in Tuesday’s other semifinal.

“I liked the girls’ response. They weren’t perfect today, but I told them you don’t have to be perfect,” said Larkin. “You just have to be good enough and you’ve got to trust in one another.”

Chancellor will need to heed what their veteran coach said even more so when they face Great Bridge, who knocked them out in the 2019 state semifinals with a 2–1 overtime win.

Regan Bestick said it will be tough, but the Chargers will be looking forward to the rematch.

“They knocked us out, so getting to face them again would just [will] just be icing on the cake.”

Olympian Tom Daley knits while watching in the stands in Tokyo

Olympian Tom Daley knits while watching in the stands in Tokyo 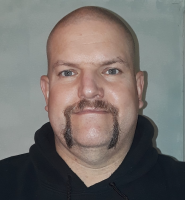 Chancellor's Caitlyn Bergmann makes her way past Heritage defenders during the Class 4 field hockey semifinal at Chancellor High School in Spotsylvania, Va. on Tuesday, April 20, 2021. Bergmann scored one of the Chargers' goals in their 2-1 victory.

Chancellor's Eleanor Byram gets to the ball ahead of Heritage's Kenedi Brundage during the Class 4 semifinal at Chancellor High School.