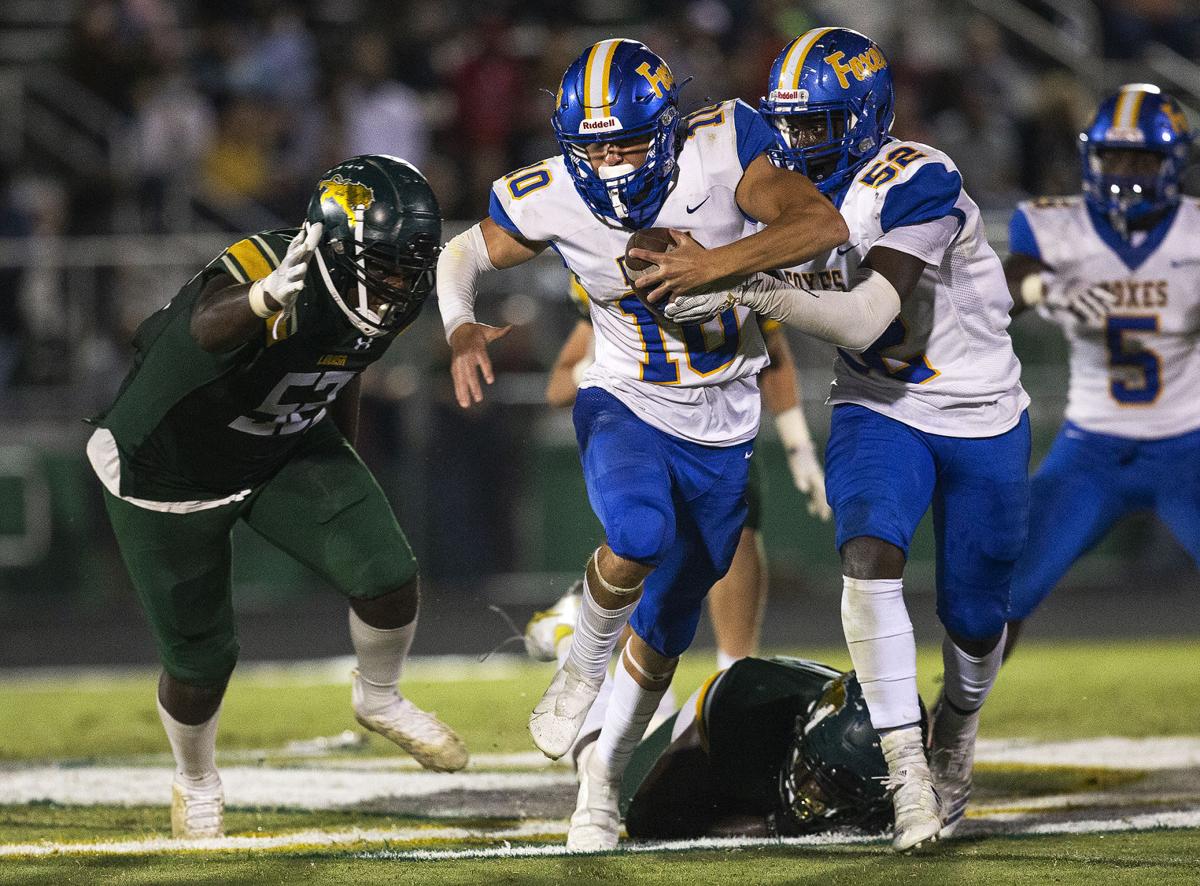 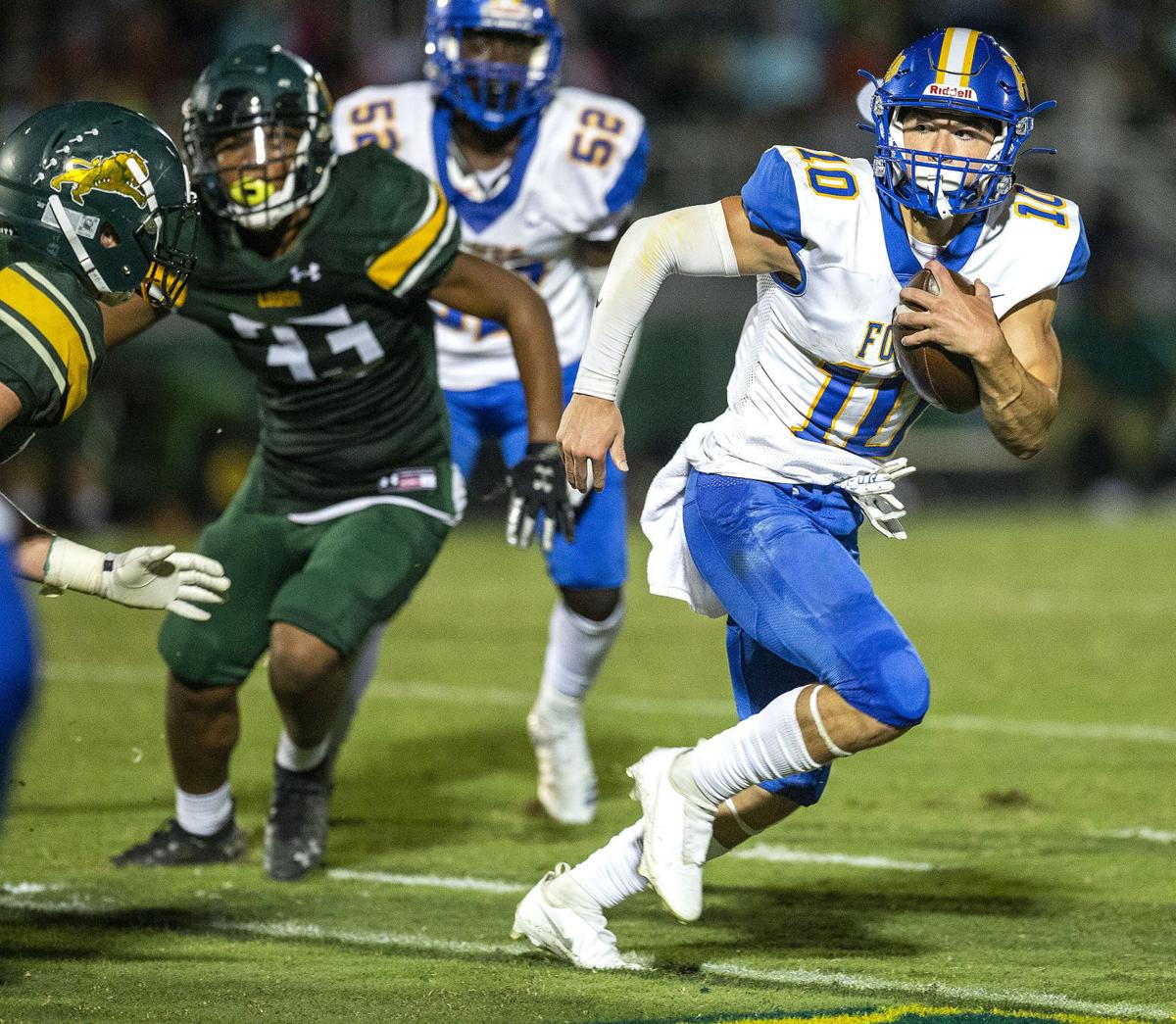 Zach Ferguson admits he was caught off guard.

He hadn’t taken many practice snaps at quarterback in the week leading up to King George’s state semifinal against Lake Taylor in April. When starter Charles Mutter went down with a dislocated shoulder, the lack of work showed.

Ferguson—primarily a running back at the time—went 0 for 6 passing in relief of the injured Mutter, who later returned to the contest.

Ferguson’s development as a passer came into stark relief last Friday, when he threw for three touchdowns and rushed for another as King George snapped Louisa’s 38-game regular-season win streak with a 33–15 road victory. The Free Lance-Star player of the week completed 12 of his 22 pass attempts for 205 yards while also contributing several tackles at safety.

“I’ve come a long way,” Ferguson said. “The more reps I’ve gotten, I’ve gotten to learn the offense more and gotten the timing down with the receivers. I’ve just gotten a lot smarter with the game.”

Two of those receivers—sophomores Mekhai White and Chanz Wiggins—accounted for all but 12 of Ferguson’s passing yards against the Lions. At 6-foot-4, White and Wiggins aren’t just big targets; the pair excels at working back toward the quarterback if and when a play breaks down.

“It definitely makes it a lot more calm, because there’s two receivers who can rely on when there’s pressure,” he said. “They shorten their routes and get open quickly for me so I can get them the ball. “

Unlike Mutter, who did the bulk of his work from the pocket, Ferguson presents a true dual-threat under center. The southpaw has been clocked at a brisk 4.58 seconds in the 40-yard dash.

“He runs extremely well, and it just brings a different dimension to the position for us,” King George coach Vern Lunsford said.

Lunsford and the Foxes (1–0) are utilizing Ferguson’s ample athleticism on both sides of the ball. Yes, it’s somewhat unusual for a starting quarterback to turn around and rove the secondary. But Ferguson has so far proven capable of handling the workload.

“I think he has a chance to be a college football player at both of those positions,” Lunsford said. “He’s willing to do whatever it takes for the team to be successful, and he likes that challenge.”

It would likewise prove challenging for these Foxes to replace the offensive production that graduated along with standouts like Mutter and fellow Free Lance-Star All-Area selection Javon Campbell. But that’s exactly what King George is determined to do.

Senior running back Gabe Aley returns to the lineup after sitting out the spring season, and the Foxes feature an offensive line that has “blocked their tails off,” Ferguson wrote in a text message.

“We lost a couple seniors that did make a change to the game, but we knew that we had to come back and do better,” Ferguson said. “They did take us pretty far, but our team feels like we can go further with the talent and discipline we have.”

(We will update the scores as often as possible)

Spotsylvania coach Jeremy Jack set a lofty goal of 400 yards rushing for his team against James Monroe on Friday night.

Starting the year 7–0 would make most teams ecstatic.

It was pure football magic, a can-you-believe-what-you-just-saw kind of play that evoked images of Boise State's bowl exploits to those in the…

After three scoreless quarters, Jayden Smith got the sense that offense was not going to win Friday night's Commonwealth District matchup betw…

The past 13 days of North Stafford football were more of an exercise in contact tracing than actual, physical contact.

You can’t beat a good team if you turn the ball over, the old saying goes.