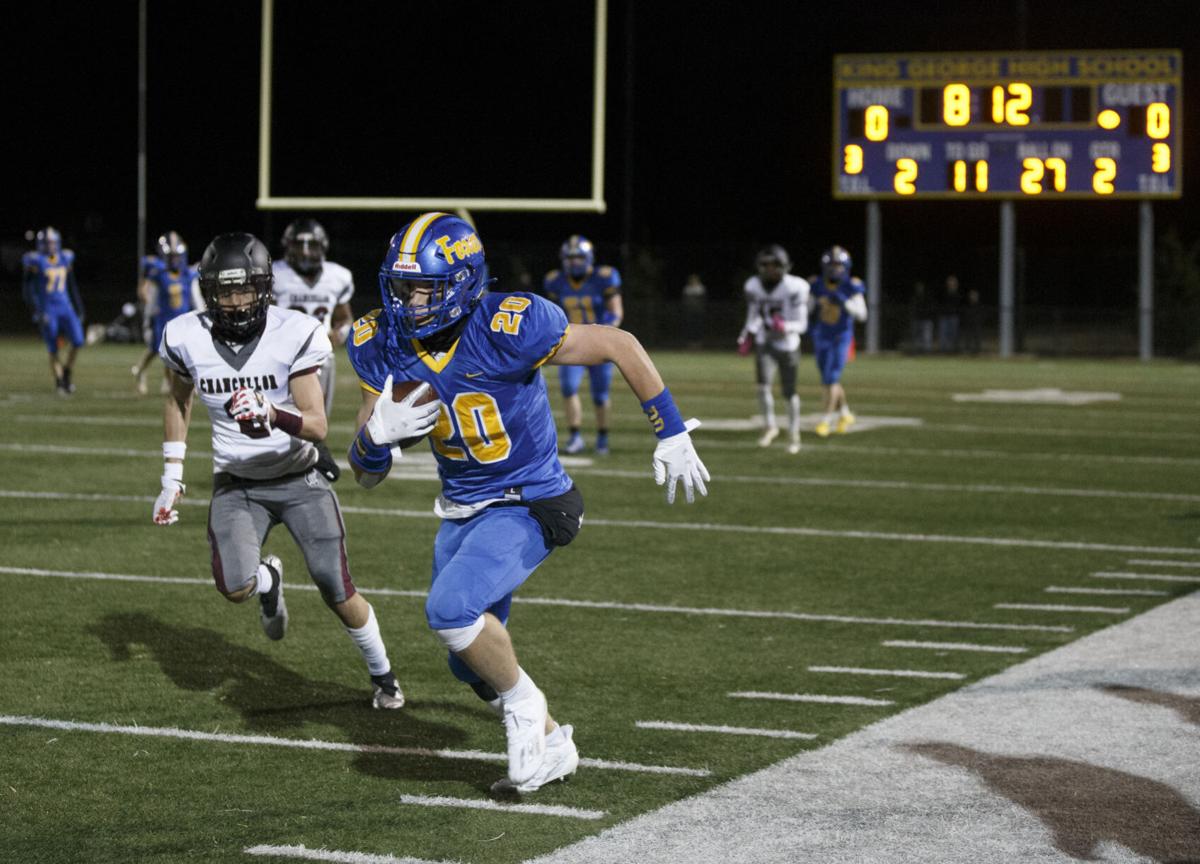 King George’s Kyle Reviello runs along the sideline on his way to the end zone for the Foxes’ first touchdown. 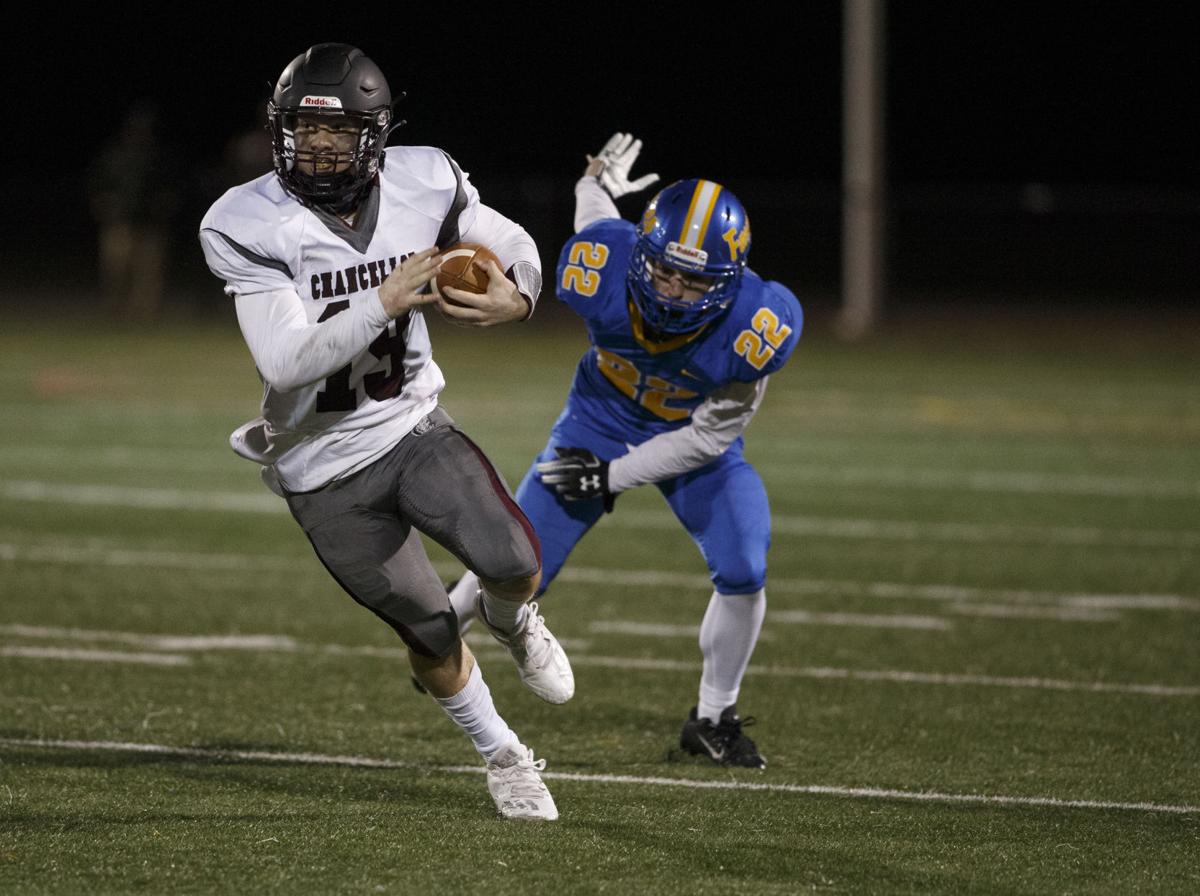 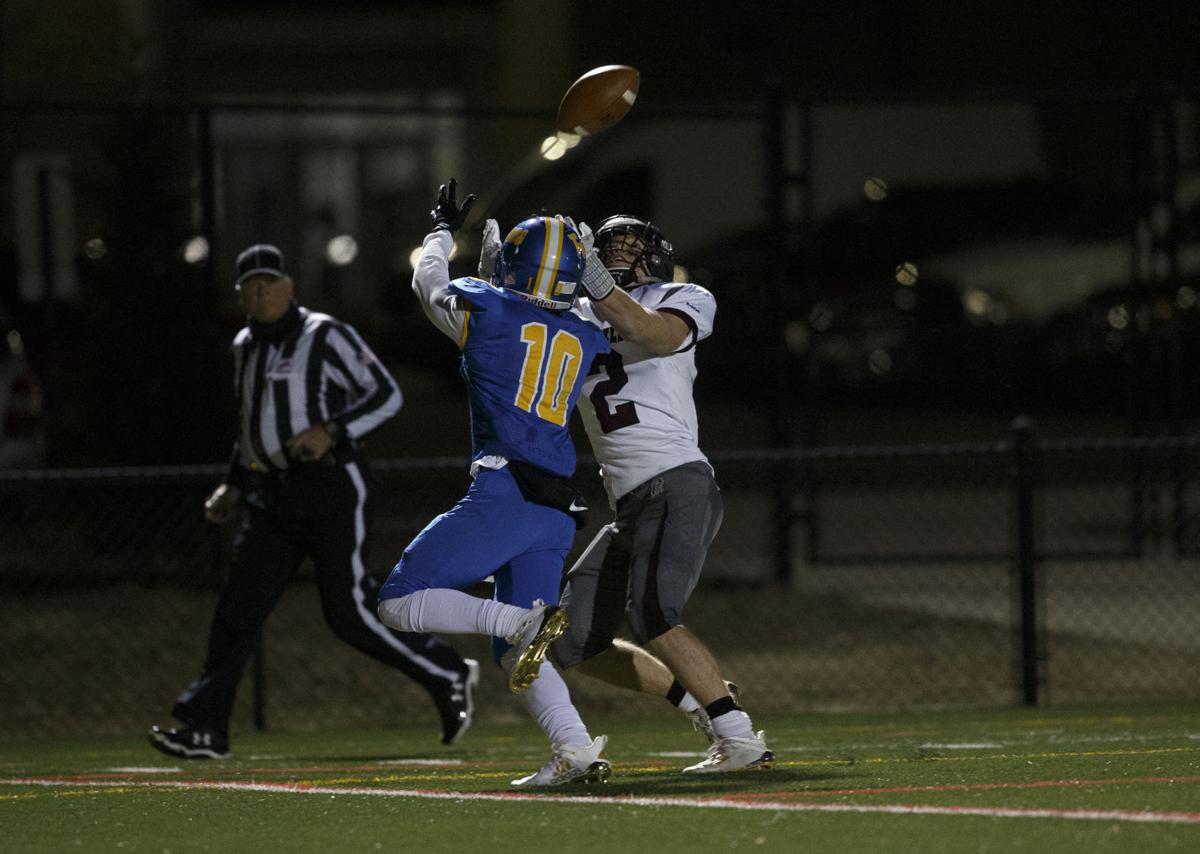 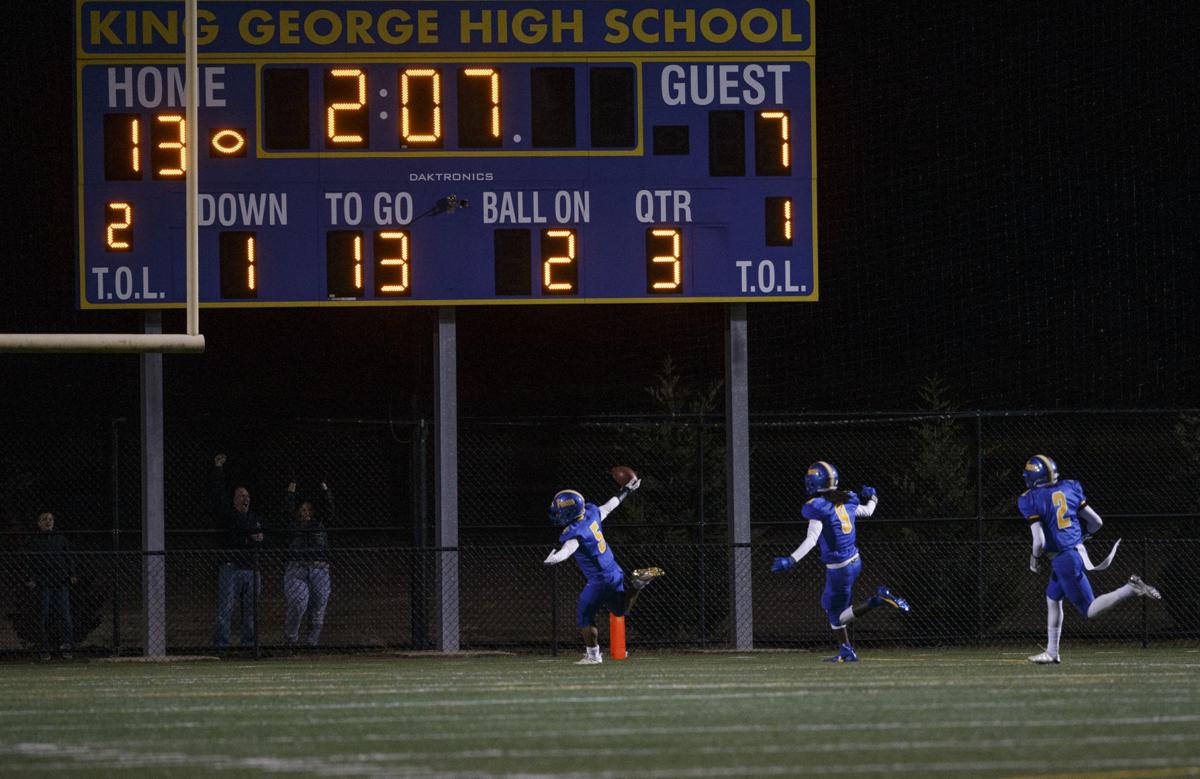 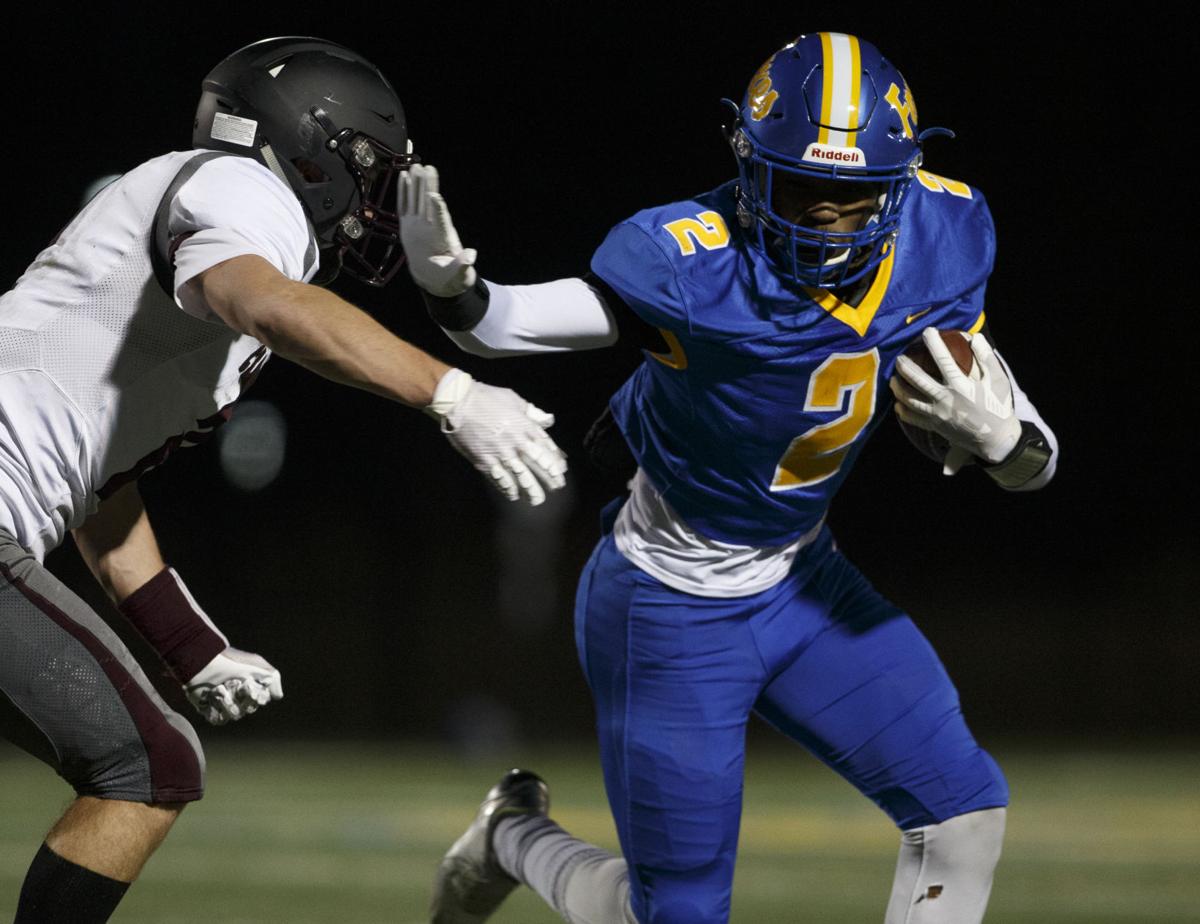 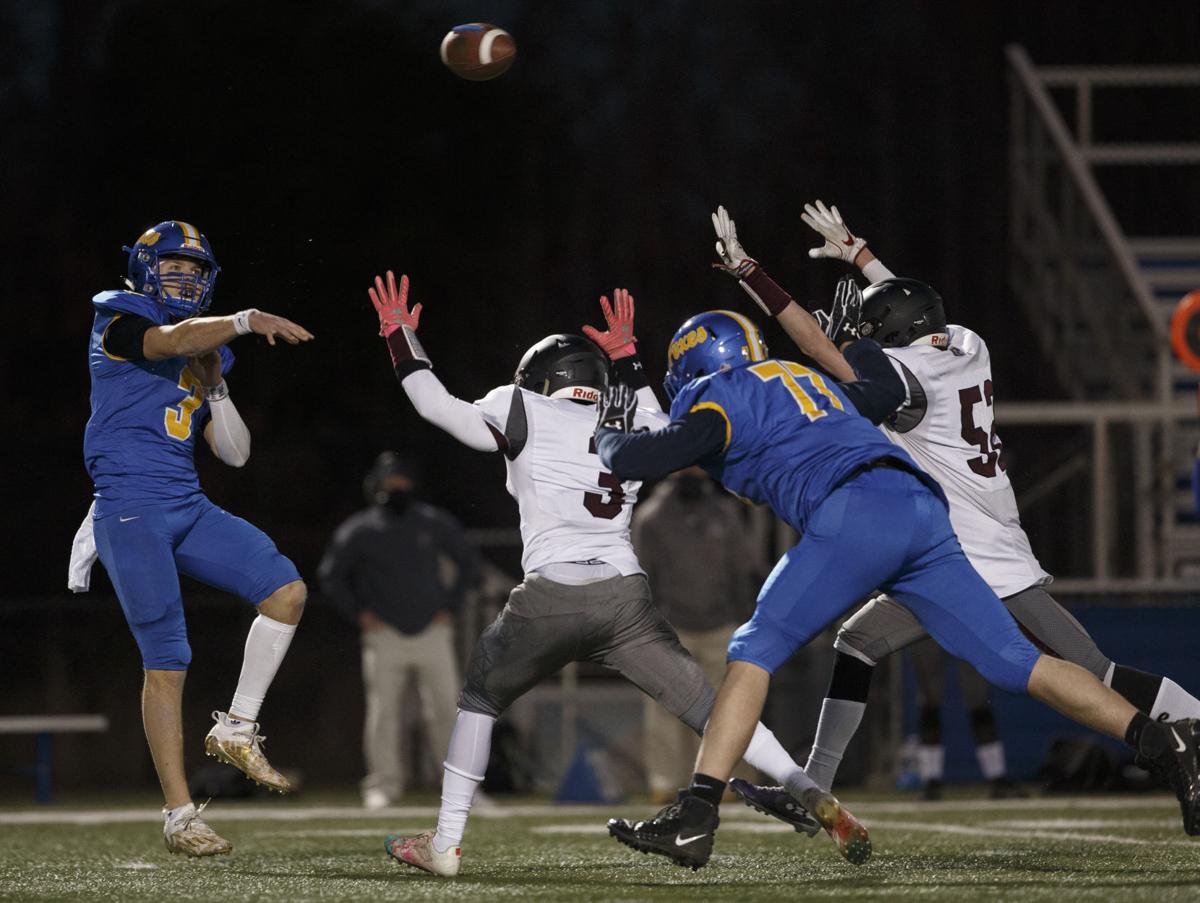 By DAVID KESSLER FOR THE FREE LANCE–STAR

It was a long time coming, but King George finally got its 2020 football season started with a hard-fought 19–14 win over Chancellor Tuesday night.

“It’s good to be back,” said Von Whiting, whose 98-yard touchdown run helped put the game out of reach late in the third quarter. “We’re excited. We’re ready. We’ve been working so hard to get back, and now we’re here.”

Like everyone else, the Foxes had been waiting a long time to get back on the field. Not that Kyle Reviello was counting.

“It just felt good, after almost 18 months, 464 days, to get out here and finally play some ball, it felt really good,” said Reviello, who scored the season’s first touchdown on a 73-yard catch-and-run that gave the Foxes the early lead.

Reviello said the team only had seven fully padded practices before the start of the season.

“There was no way to condition for a game, so that was going to be a big factor coming out here, and we just fought to the end,” he said.

“The kids dealt with a lot of adversity all off-season,” Lunsford said. “They dealt with different circumstances, unique times, a lot of unknowns, no scrimmages, limited days of practice due to weather, and these guys played their butts off for 48 minutes.”

“It took a complete game, all three phases, and they did a great job,” he said.

Chargers coach Jeff Drugatz said he was even more nervous than usual going into the game, but he knew everyone was in the same boat.

“I’m blessed to have a good senior class,” Drugatz said before the game, “but it’s just the unknown. I think we’re ready, but we’ll find out.”

Drugatz said his defense did a great job keeping the Foxes contained. The unknown turned out to be the Foxes new-look defense, which the team hadn’t expected.

“We weren’t prepared for it, and with new guys on the O-line trying to make adjustments, it just didn’t work out for us offensively,” he said.

“They played their hearts out,” Drugatz said. “I’m proud of all of them. But we’ve just got to get back to the drawing board and fix things.”

The offense did have a few big moments. Brycen Edwards scored on a 21-yard run early in the third quarter to briefly give the Chargers a one-point lead, and Kodi Mohr caught a 19-yard touchdown pass with nine minutes left in the fourth to bring the game back within reach, but the Foxes defense held up at the end.

Chris Cox dove to break up a fourth-down pass on the Chargers’ final drive, and it was victory formation for the Foxes.

Chancellor has a quick turnaround ahead, with an afternoon game at home on Saturday against Spotsylvania. King George will head into Fredericksburg to play James Monroe on Saturday, March 6.

Reviello, for one, is looking forward to the game and believes the Foxes are in for a big season.

“I think for a long time people have looked down on King George,” he said, “and I think we’re going to shock the world this year.”

Second acts rarely live up to the original, but Robin Woodie’s return as Stafford High School’s field hockey coach came about as close as possible.

Fredericksburg Christian School is in search of a new baseball coach after Jeff Petty announced his resignation effective at the end of the season.

Faith Piser had five goals and three assists, and four other players netted three goals apiece to help Colonial Forge get a 20-10 Commonwealth…

Vince DiLeonardo doubled, had three hits and drove in two runs to help the Fredericksburg Christian School baseball team earn a 9–4 victory an…

King George’s Kyle Reviello runs along the sideline on his way to the end zone for the Foxes’ first touchdown.