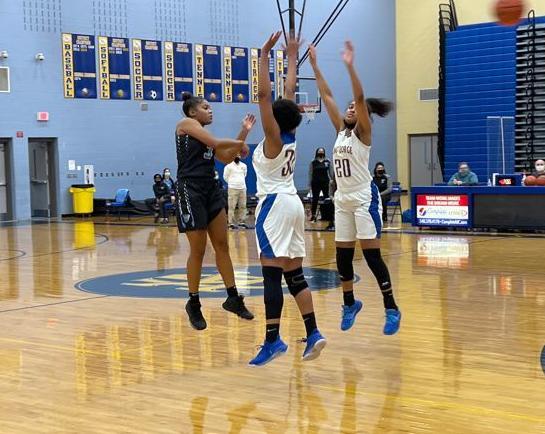 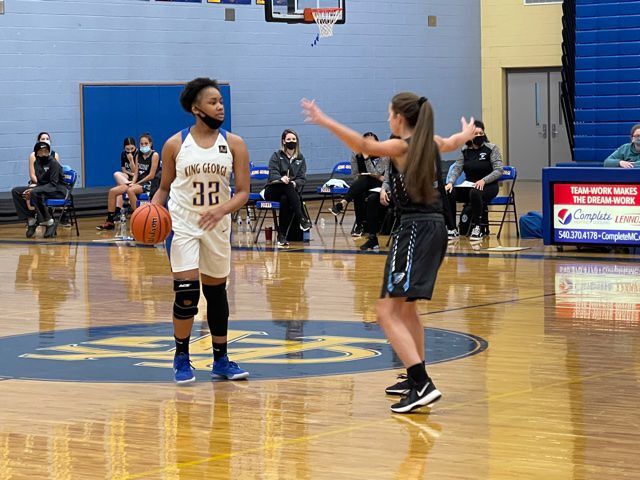 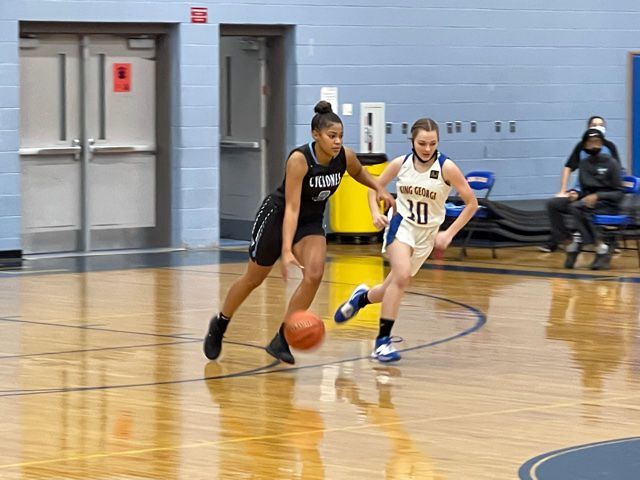 The Cyclones’ Terese Greene drives against the Foxes’ Kaylee Truslow (10). 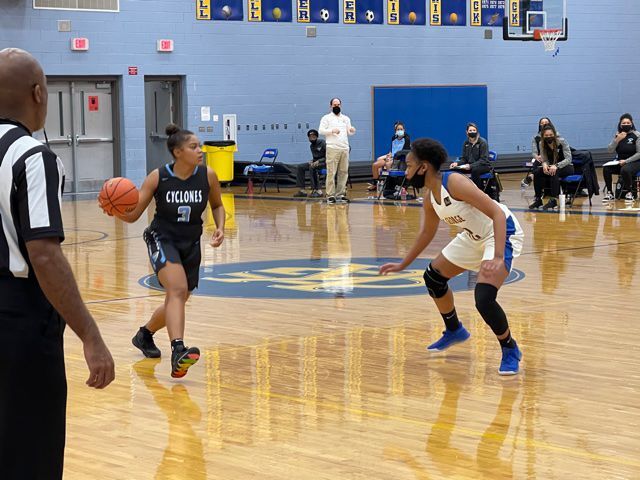 When Greg Ellis agreed to replace Neil Lyburn as King George’s girls basketball coach, he knew he had big shoes to fill.

Lyburn guided the Foxes to a 79–19 record over the past four years before accepting the same position with King George’s boys program during the summer. That left Ellis, who served as an assistant under Lyburn during the girls’ aforementioned run of dominance, as the first choice to replace him.

Aiyana Ellis scored 20 points, Gabby Mack added 18 and Naomi Glass chipped in 12, propelling the host Foxes to a commanding 59–37 victory over Eastern View in the season opener for both teams Thursday afternoon.

“We’ve got a handful of players that we can depend on to score for us this season,” Ellis said. “Today was a taste of that with those three taking things over the way they did.”

It took the King George trio a little while to get untracked, but once it did, the hosts rolled.

Trailing 13–6 midway through the first quarter, Glass tallied a pair of baskets down low and Mack registered one of her own, pulling the Foxes within 13-12 by the end of the period.

King George’s momentum carried over into the second frame. Ellis scored two quick buckets and Lauren McCall sank a 3-pointer, all within the first two minutes, to cap a 13–0 run and give the Foxes a 19–13 lead.

Ellis, the head coach’s daughter and a second-team all-Region 4B pick last year, was particularly hard for Eastern View to handle in the second quarter. The 6-foot senior forward posted 10 points and collected five of her seven steals in the stanza.

“It’s no secret what Aiyana can do,” Greg Ellis said. “The word has been out on her, so she knows she has to work that much harder if she’s going to be successful.”

Mack found her touch from long range in the third period, draining a pair of treys. The latter put the Foxes up 40–23 late in the frame and all but slammed the door shut on the Cyclones’ comeback hopes.

Glass, a transfer from Stafford, totaled six points in each half. She also pulled down 11 rebounds, giving her a double-double in her first outing at her new school.

“We knew as soon as Naomi transferred from Stafford that she was going to be a consistent contributor for us,” Greg Ellis said. “She’s cemented that with what we’ve seen from her in practice, and this was a good start for her.”

Eastern View, which lost four starters from a squad that beat King George for the Battlefield District tournament title a season ago, was paced by Terese Greene’s 17 points. The two-time Class 4 all-state selection scored nine of those in the first quarter on the strength of three 3s, but found breathing room scarce once the Foxes went to a 1–3–1 trapping zone defense in the second frame.

Greene was the only senior to see action for the Cyclones, and it showed. With three sophomores and two freshmen playing key minutes, Eastern View committed 25 turnovers on the afternoon.

“You could tell there were a lot of nerves out there,” Eastern View coach Mike McCombs said. “We had only two kids that had ever played in a varsity game before today. King George’s experience and length were the difference in the ballgame, period.”

Riverbend coach Nat Jackson has at his disposal the Mariana Trench of high school basketball rosters, a collection of 13 players so deep as to…

The Cyclones’ Terese Greene drives against the Foxes’ Kaylee Truslow (10).