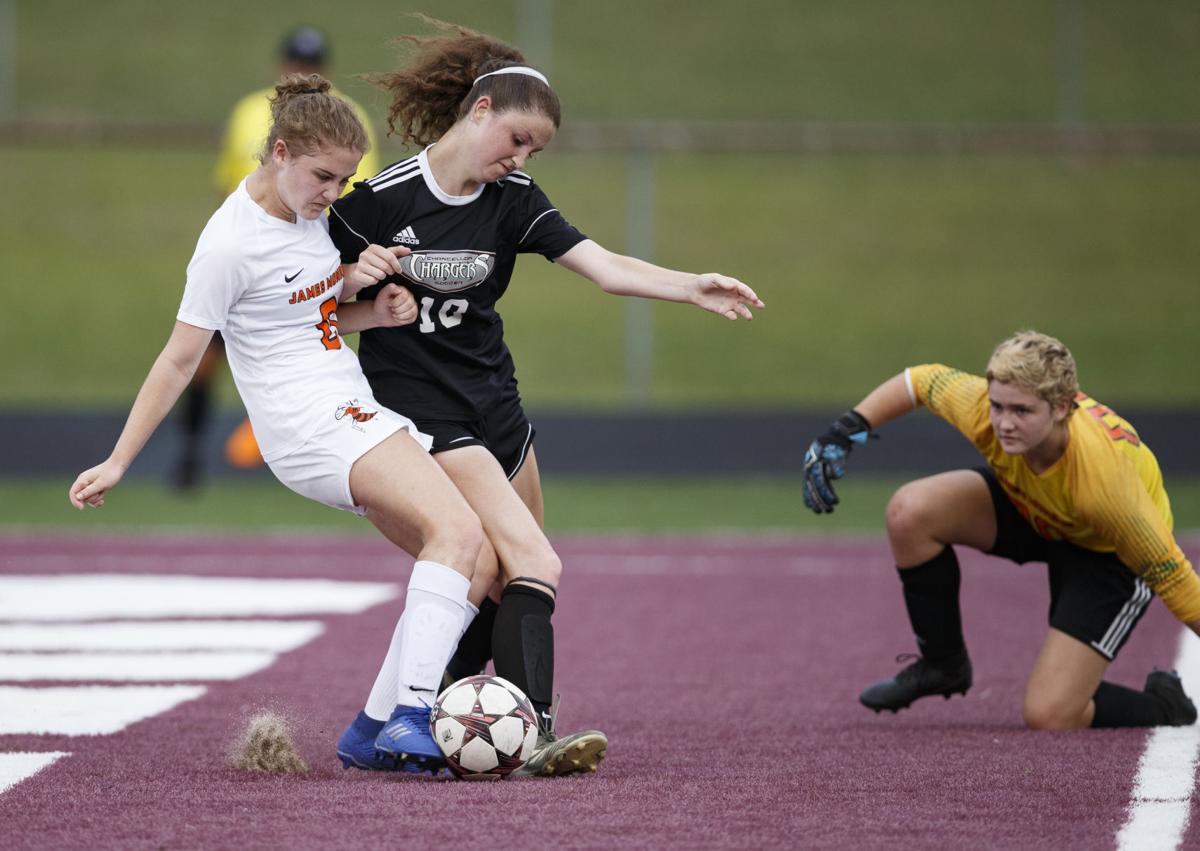 Chancellor’s Madison Heischman (center) and James Monroe’s Nadia Hughes battle for the ball in front of the JM goal. 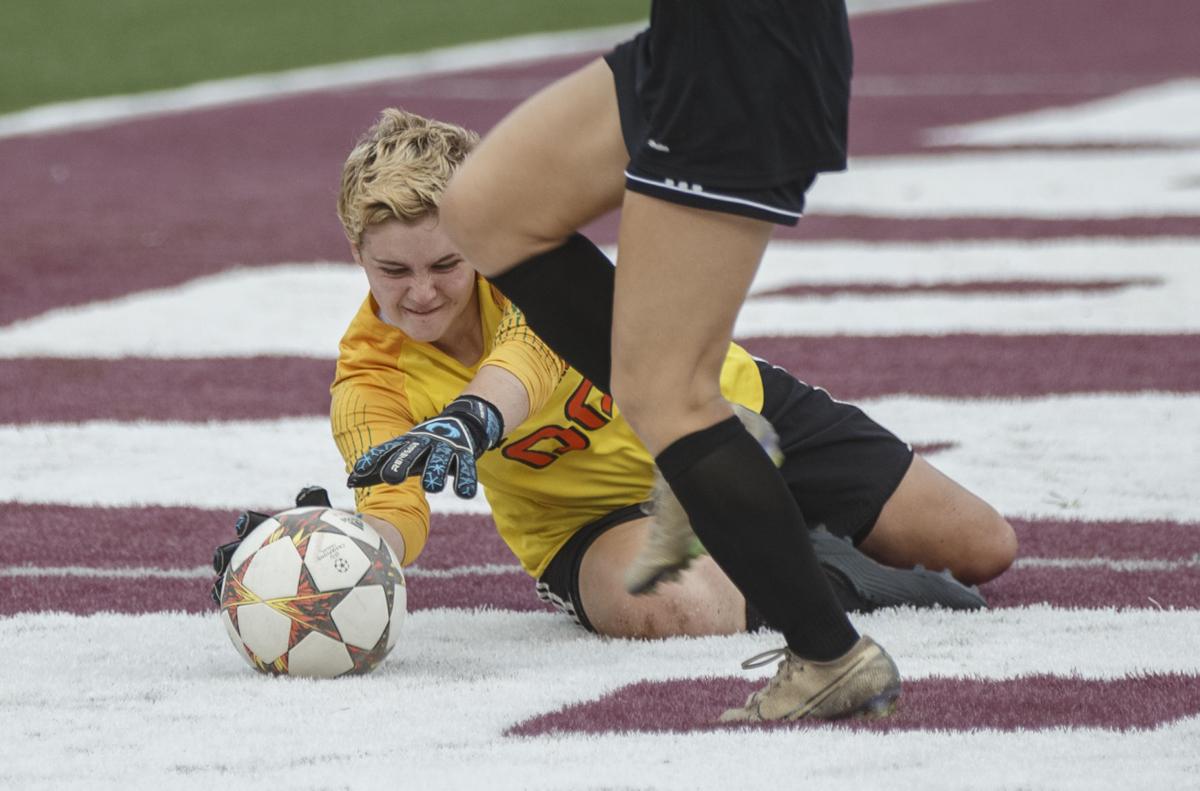 James Monroe keeper Zoe Hughes dives to make the a save as Chancellor’s Katy Bronski closes in. 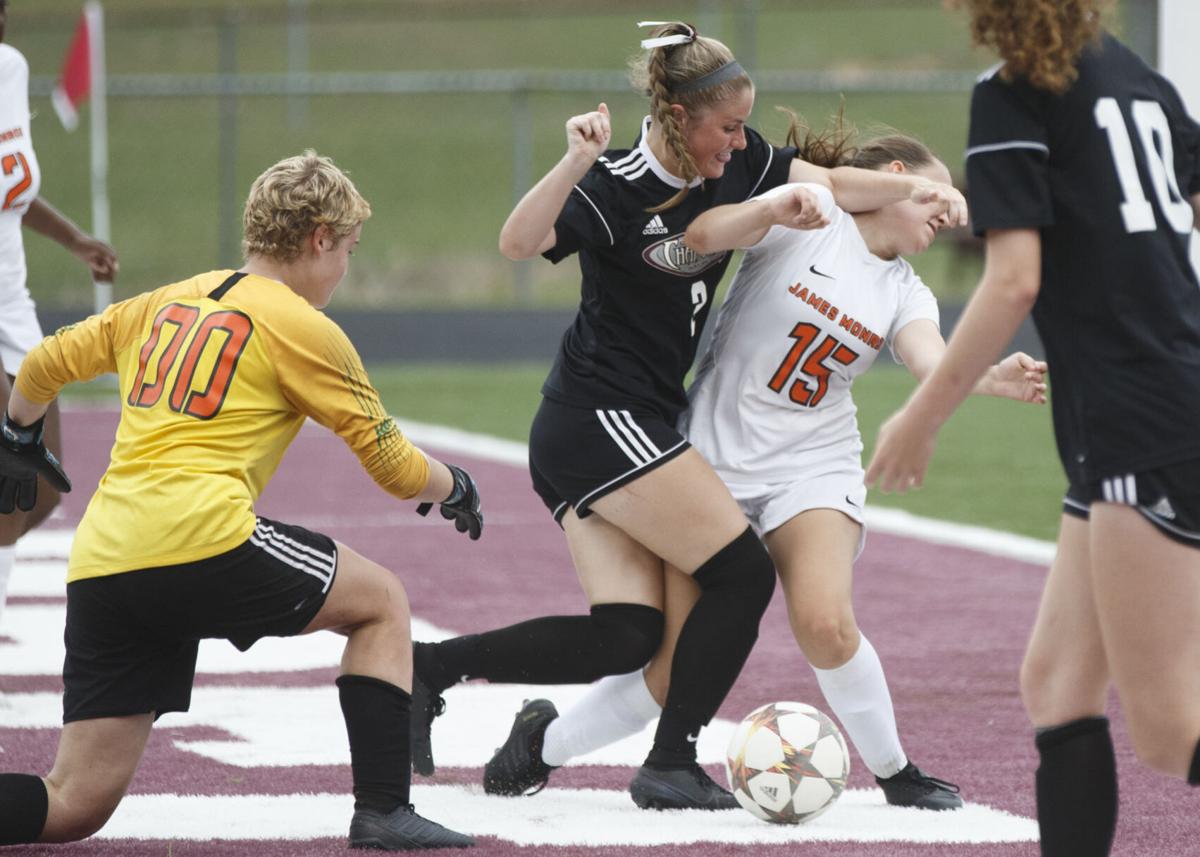 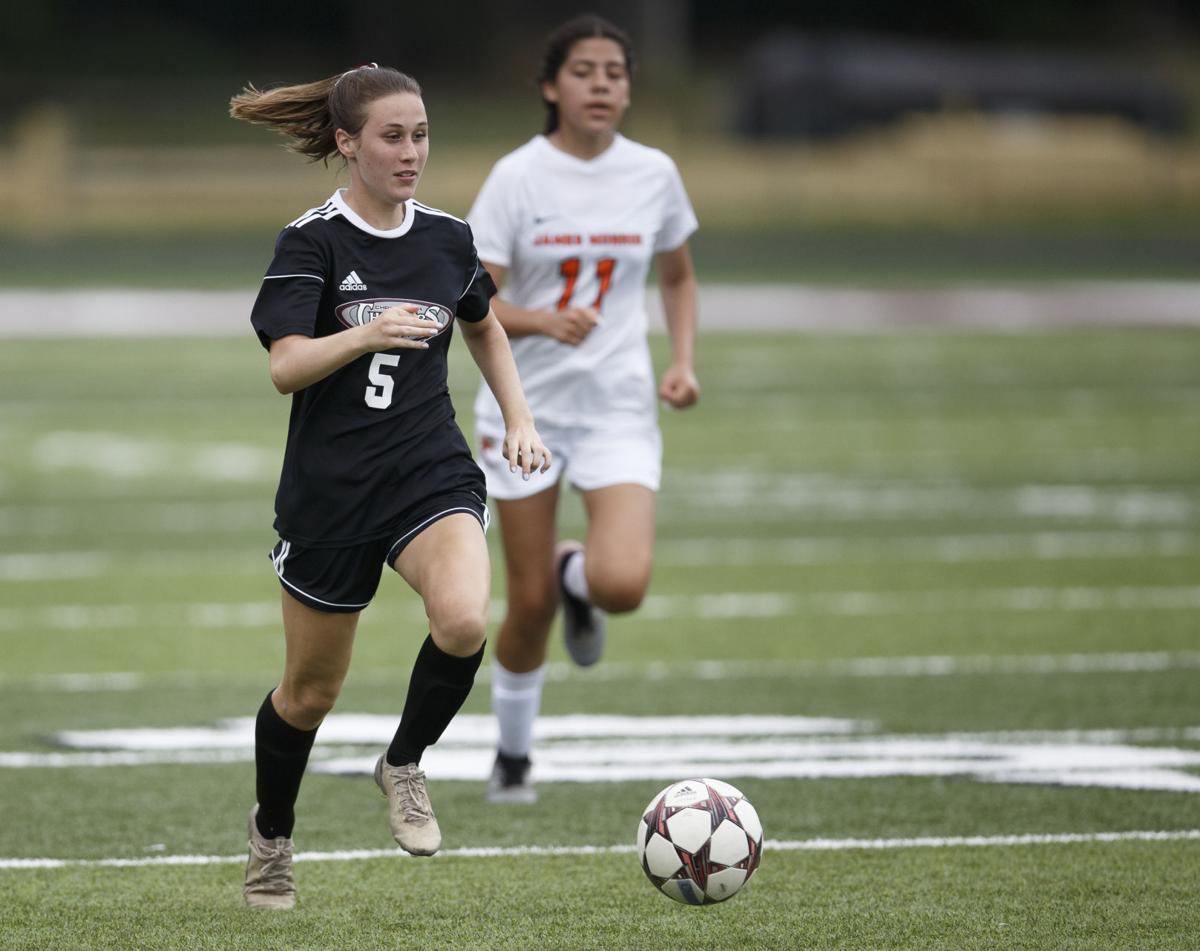 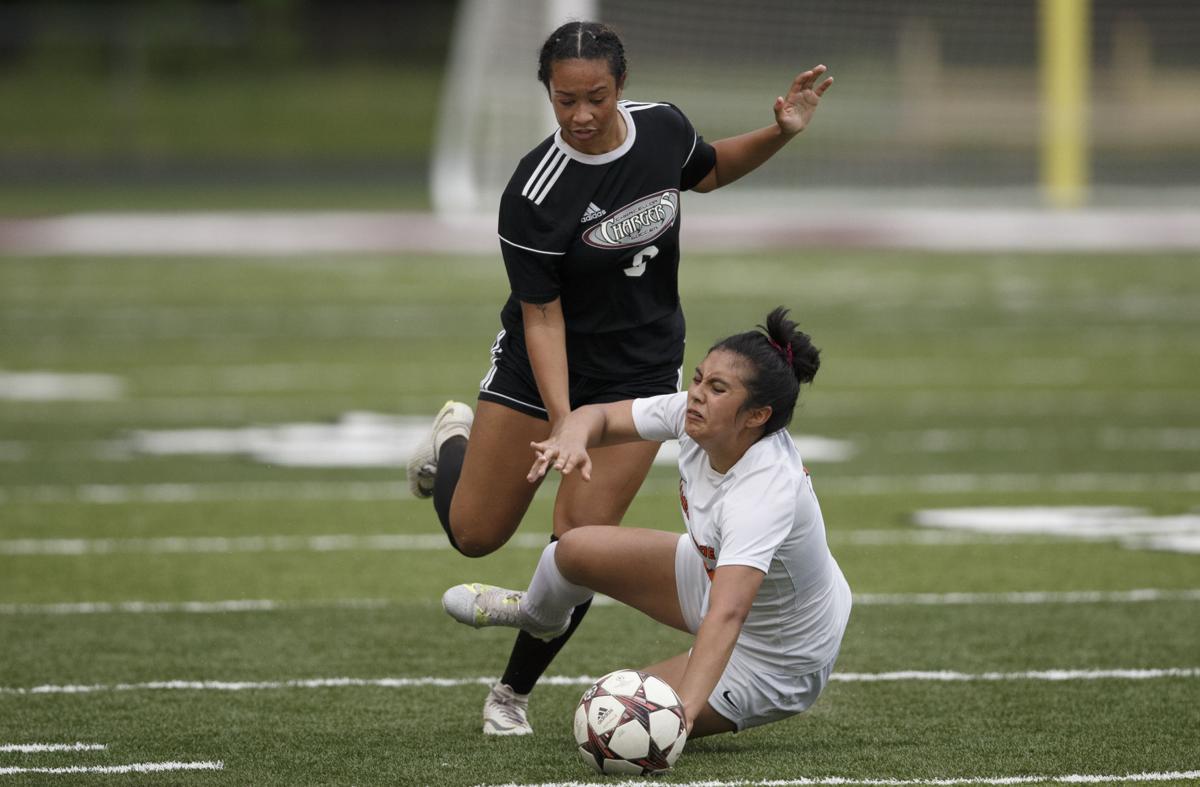 Madison Heischman concedes it’s not the most elegant offensive strategy ever devised. But when it comes to scoring chances, the Chancellor senior and her fellow forwards are more concerned with quantity than quality.

“As bad as it sounds,” said Heischman, “we’d rather just kind of throw shots at the net and hope that some of them go in rather than try to set up the perfect shot every single time.”

The Chargers’ high-volume approach has come across loud and clear this spring. Entering Tuesday’s Battlefield District 4–0 victory over James Monroe, Chancellor (8–0) was averaging more than 25 shots per game.

The Chargers actually outpaced their average in a their shutout of the Yellow Jackets, bombarding James Monroe goalie Zoe Hughes with 27 shots in a match that was called with 14 minutes remaining in the second half due to lightning.

Later in the half, Heischman scored twice in a one-minute, 50-second span as the Chargers went ahead 3–0 after 40 minutes of play. The first of her two tallies came via header off a well-placed cross from junior Ella Newman.

In addition to her assist, Newman had a second-half goal for the Chargers, who close out their regular season on the road against Courtland at 11:30 a.m. on Thursday.

With just a week left before launching into the Region 4B playoffs, Chancellor coach Klint Jackson laid out modest goals for his side. If expected results hold, Chancellor could host Monacan next Monday in a first-round matchup.

“We didn’t want to create any bad habits, and we want to be more consistent,” Jackson said. “If we can get both of those, we can be even more solid.”

While the Chargers like to pile on scoring chances, their defensive philosophy calls for denying shots entirely. On Tuesday, the Yellow Jackets managed just a single attempt on goal.

Despite the loss, James Monroe (6–2) can secure the top seed in next week’s Region 3B tournament with a win over Caroline on Wednesday.

“I think we’re definitely fortunate to play such a good team like Chancellor before regionals, just for a wakeup call,” said James Monroe junior Charlotte Snead, a Davidson College signee. “We have a lot of freshmen, and a couple of freshmen starters, so just to get them aware of what we’re getting into.”

Another great day for favorites in Major League Baseball

Another great day for favorites in Major League Baseball

MANASSAS—An early five-run deficit against a Division I-bound pitcher might seem an insurmountable obstacle, from both a practical and psychol…

An early timeout allowed the Colonial Forge girls lacrosse team to settle down in the Class 6 state semifinals Tuesday evening at Cosby.

The current seniors on the Brooke Point softball team were freshmen in 2018 when the Black-Hawks reached the Class 5 state championship game.

PURCELLVILLE—Last impressions tend to be lasting ones, but Craig Lopez would rather not dwell on the final game for his veteran 2021 Mountain …

Chancellor’s Madison Heischman (center) and James Monroe’s Nadia Hughes battle for the ball in front of the JM goal.

James Monroe keeper Zoe Hughes dives to make the a save as Chancellor’s Katy Bronski closes in.