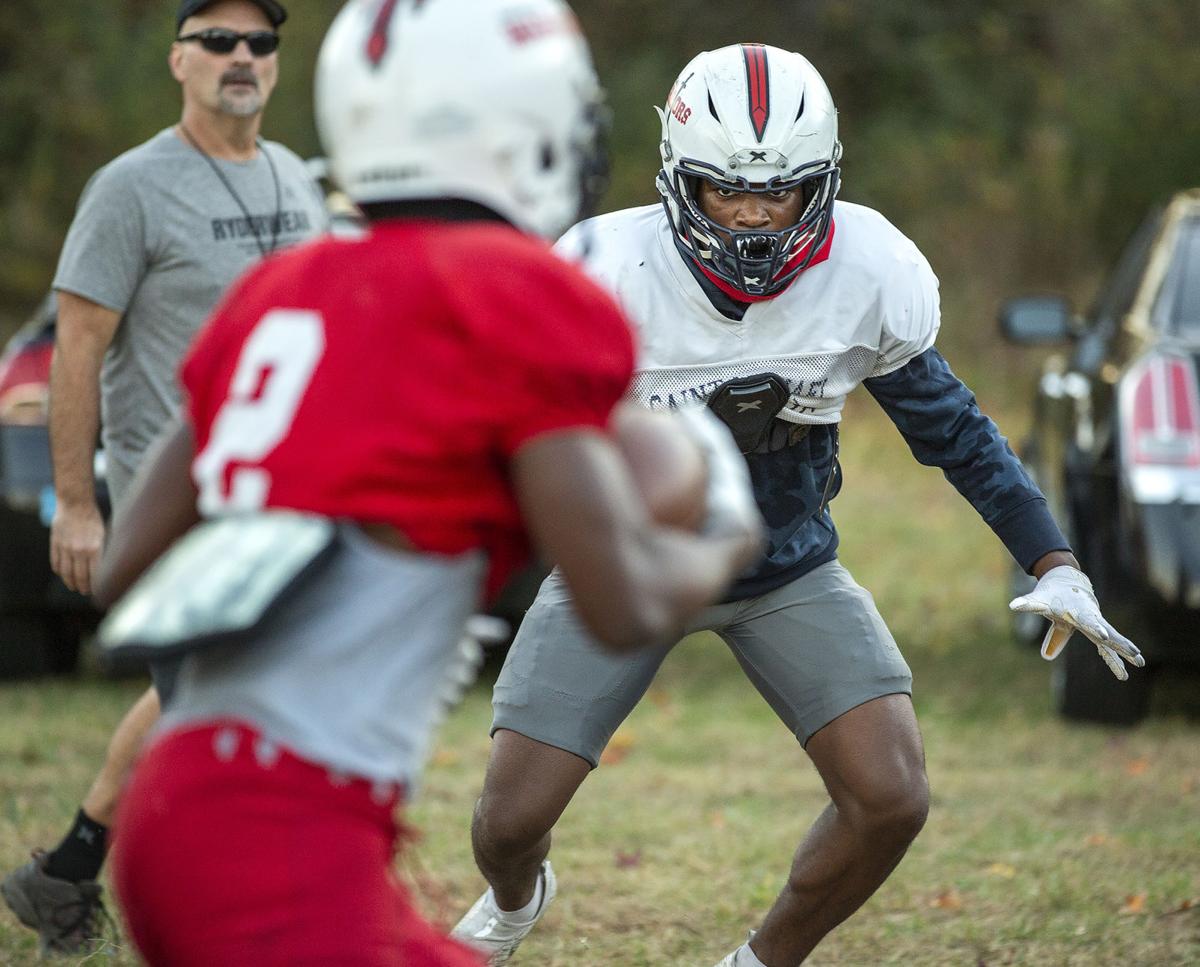 St. Michael running back Melvin Spriggs Jr. (in white) lost his grandmother and cousin, and his mother is battling cancer. 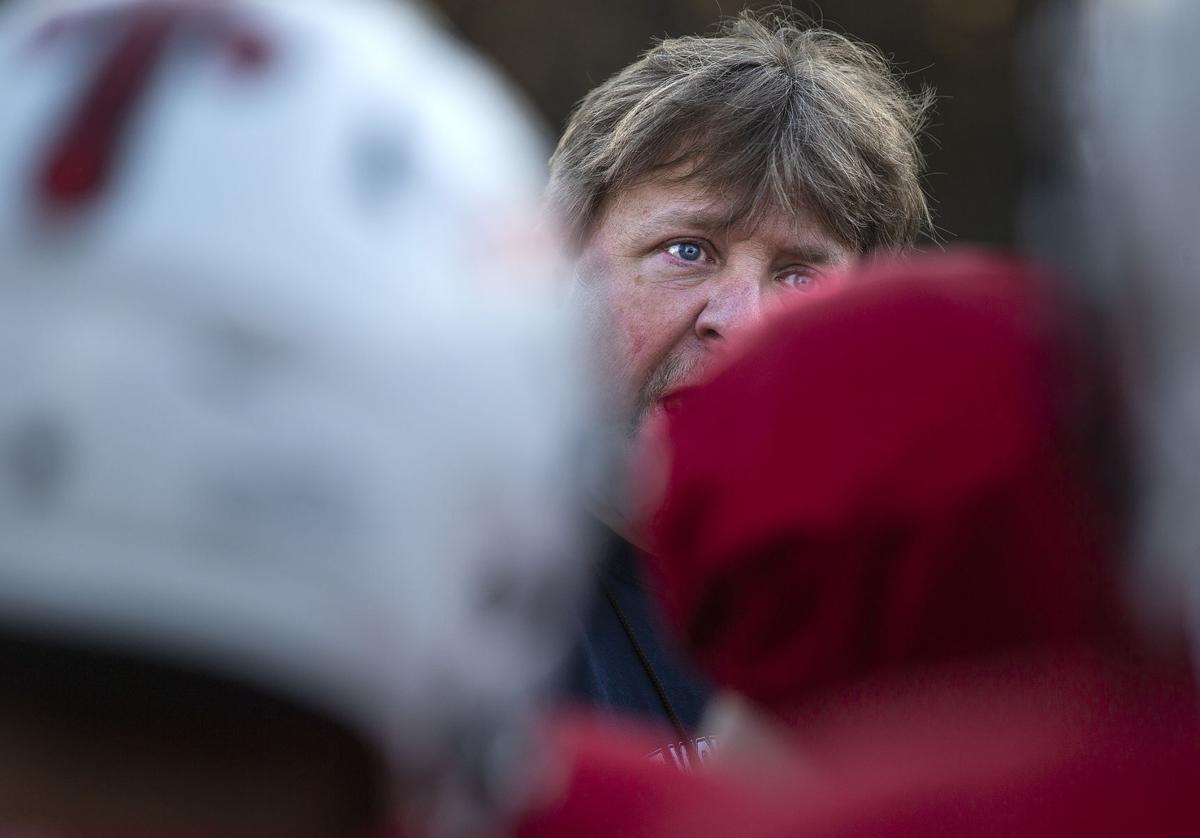 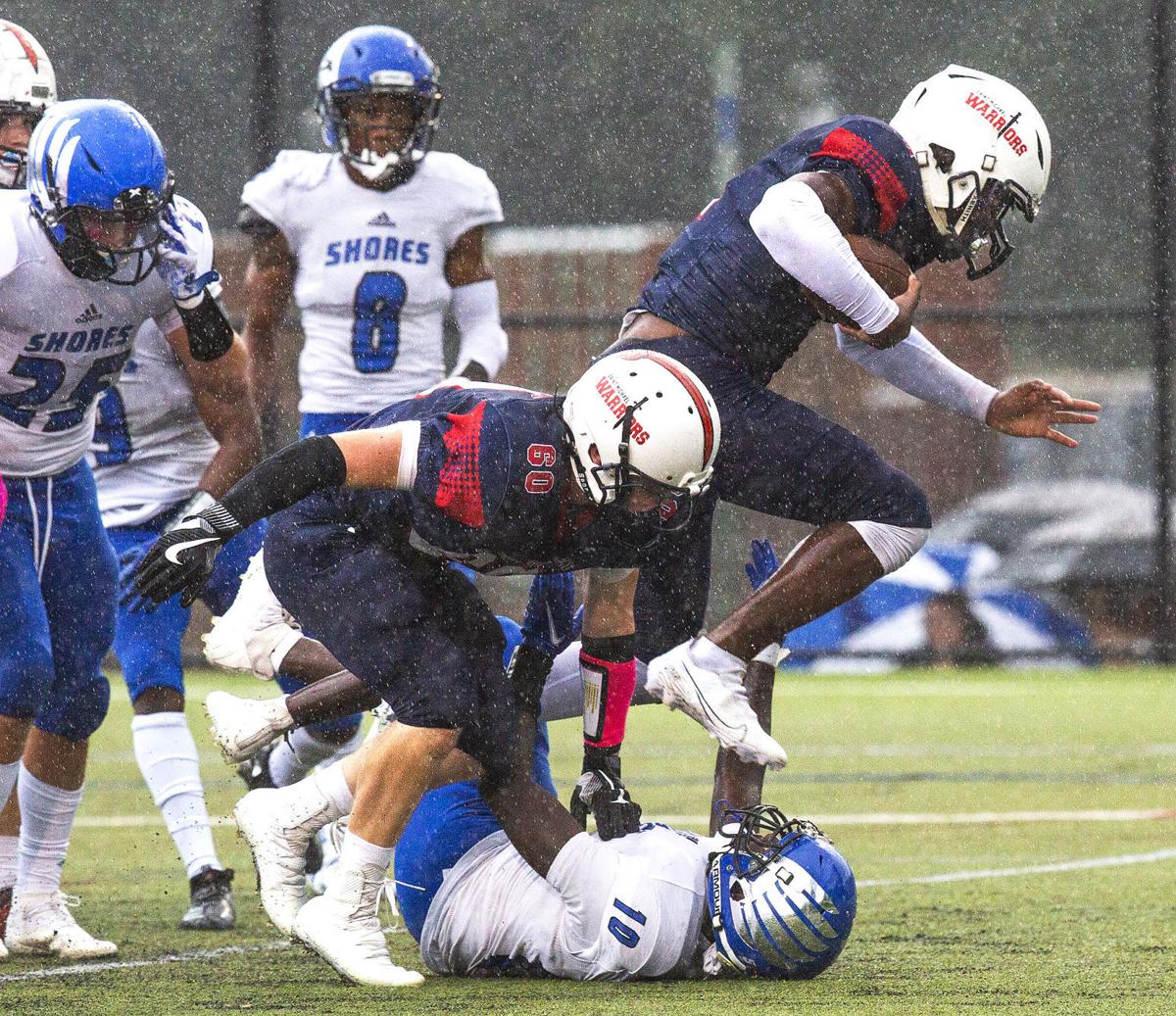 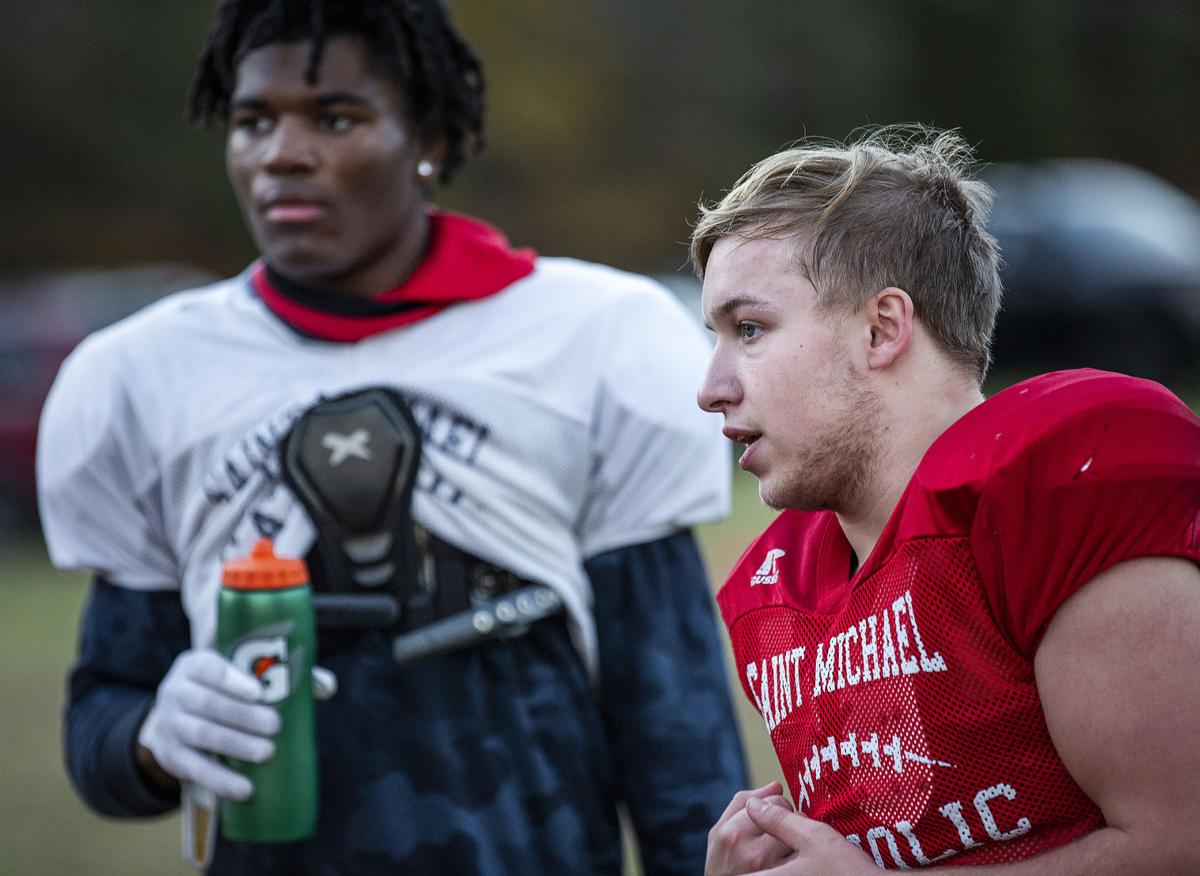 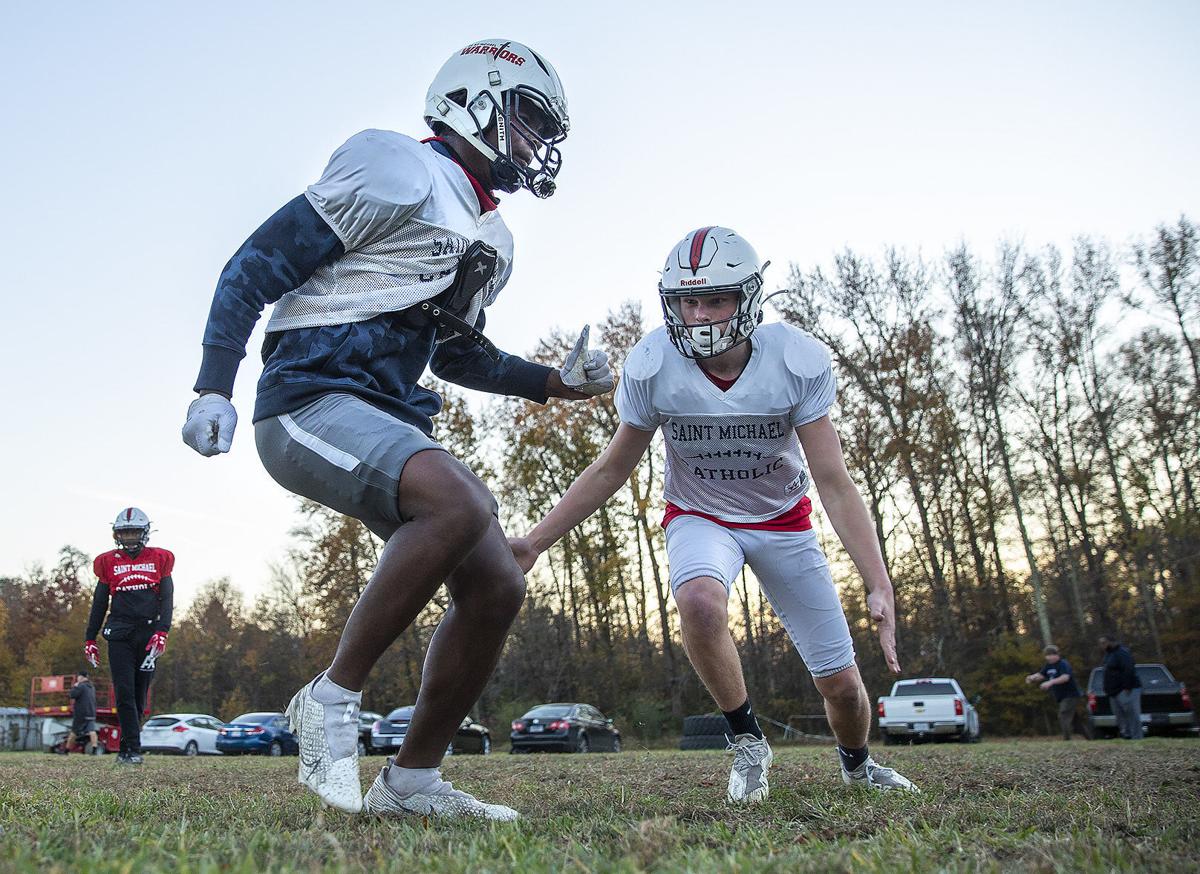 Spriggs (left) has had an outstanding season as a running back.

At times, Melvin Spriggs treats his helmet less like a piece of football equipment and more like a virtual reality headset.

It’s a Thursday afternoon, and Spriggs, a junior running back at St. Michael the Archangel Catholic School, has donned pads in preparation for the VISAA Division-III state championship game on Saturday night.

The Warriors’ practice field isn’t much, just a gently-sloped tract off State Route 688 in Spotsylvania County. Players’ cars line the perimeter, and goats graze on an adjacent property.

At 5:05 p.m., an assistant coach fires up a series of portable floodlights. Their distinct hum is comforting, a soundtrack Spriggs can lose himself in as he dissociates.

“The thing is, a lot of people got a treehouse they go hide in or something like that,” says Spriggs. “I’ve got a football helmet that takes me away from everything. It’s like a disconnect from the world. It’s like it’s a different life.”

It’s a life where his grandmother Verlene is still around to watch him play football. A life where his cousin was never gunned down on the streets of New Orleans. And a life in which his mother, Althea, isn’t a breast cancer patient enduring daily radiation treatments.

While Spriggs tries to move past a series of family tragedies, his coach is grieving the recent death of his father. The Warriors have suffered just two defeats this season, but the team has become all too acquainted with loss.

‘Life is for the living’

Hugh Brown’s phone rang seven times. The Warriors’ head coach wasn’t exactly in a position to talk during his team’s Oct. 30 game at undefeated Portsmouth Christian. But, seeing as it was his elderly father, he answered.

“We were literally in the middle of plays,” Brown recalled.

Paul Brown asked about his grandson Matthew, a standout senior linebacker for the Warriors. He demanded to know how St. Michael was faring against Portsmouth’s talented offense. (Answer: quite well. The Warriors won, 21–6).

The elder Brown, whose health had been declining since an aortic aneurysm in 2019, died three days later in Indio, Calif. He was 83.

Matthew Brown called his grandfather every day after practice. With the time difference between coasts, it was the most convenient time to catch up, and the two bonded over football. Paul Brown was a rabid University of Georgia fan, but there was only one team he supported more ardently than the Bulldogs: St. Michael.

“He was just ecstatic talking about how awesome it was and how he can’t wait to watch the livestream,” Matthew Brown said.

Hugh Brown flew out to California to handle arrangements for a memorial mass that weekend. All of his children, ages 16 to 29, planned to attend. Except for Matthew.

The Warriors were set to play St. John’s Catholic Prep on Saturday, and they’d already be without their head coach. As a team captain, Matthew Brown calls St. Michael’s defenses, and the Warriors have just 19 players, meaning any absence would deplete an already-thin roster.

After thinking about it for a day, Matthew Brown made his decision. He’d stay and play.

“And I could tell it hurt him,” Hugh Brown said. “I cried on the phone. But my father said one thing to me my entire life. He said: ‘Life is for the living.’”

A change of scenery

Spriggs is nicknamed “Quad”—not for his leg muscles, which are indeed massive—but because he’s the fourth in a line of Melvins.

The product of a military family, he moved from Baton Rouge, La., to Virginia with his parents in 2018. Spriggs attended Colonial Forge High School as a freshman, where he excelled on the football field but not, he admits, in the classroom.

“I let a lot of things distract me and my grades slipped,” he said.

When one of Spriggs’ coaches at Colonial Forge, Alex Charles, joined the staff at St. Michael, he encouraged Spriggs to interview at the school, which Brown co-founded in 2006. The Spriggses lived in Stafford County and worked in Northern Virginia, and the commute was a challenge.

“It was a logistics nightmare at first,” Melvin Spriggs Sr. said.

Coaches, parents and even some teachers stepped in, giving Spriggs rides to and from school. The Spriggses, who have no relatives in Virginia, found an extended family at St. Michael. Melvin Sr. even joined the football program as an assistant coach.

When Spriggs arrived at St. Michael in 2019, he made an immediate impact for a team that won the VISAA state title with a last-second victory over Roanoke Catholic. He was the only sophomore named to the VISAA all-state team that season.

Brown would simply line up the 6-foot-2, 226-pound teen at defensive end, where opponents would prove unable—or unwilling—to block him. But questions remained, most of them unrelated to his play.

Spriggs’ academic effort and grades didn’t always match the intensity he displayed from whistle to whistle. Laid back to a fault, he struggled with punctuality. Spriggs would eventually learn to value every moment, in the hardest way imaginable.

“I guess life teaches you that,” Melvin Spriggs Sr. said. “You hope you don’t have go through that at a young age, but he has.”

The tattoo snakes up Spriggs’ left shoulder, its clasped hands and prayer beads serving as an indelible reminder of his grandmother’s embrace. Verlene Spriggs died unexpectedly of heart failure on Nov. 27, 2020—the day after Thanksgiving. She was 64.

Spriggs and his family were still reeling when another tragedy struck. His first cousin, K’Ron Hoskins, 16, was the victim of a fatal shooting in the Little Woods neighborhood in New Orleans.

“We all had to take that on at one time,” Spriggs said. “It was pretty crazy.”

Melvin Sr. figured that his son could deal with the adversity in two ways: retreat inward or process his feelings in a productive manner. Much to the dismay of St. Michael’s opponents, he’s chosen the latter option.

“Football is like my therapy,” Spriggs said. “Basically, I can hit someone else however I want on the football field, but I cannot hit them like that in real life. All that anger—whatever emotions I have built up inside of me—I take it out on the field.”

Facing Atlantic Shores, a higher-division team that features a handful of college prospects on defense, Spriggs rushed for 307 yards and five touchdowns despite a pouring rain.

“That’s the film we show people,” Brown said. “That was sort of his coming-out party.”

Spriggs’ teachers have had reason to celebrate, as well. His GPA has steadily risen—he credits St. Michael’s smaller classes—and he’s never been more focused on pursuing a college career.

“He’s the first kid in the building,” Hugh Brown said. “He doesn’t make any excuses. He’s leading this football team.”

On the season, Spriggs is averaging more than 15 yards per carry while bullying defenders with a running style reminiscent of his idol, Tennessee Titans star Derrick Henry.

Matthew Brown recalled drawing the unfortunate assignment of facing Spriggs in the “Oklahoma Drill” on the first day of practice in August. It was a matchup his father insisted upon.

“I could hit one of the 6-3, 300-pound linemen on our offensive line, and I have no problem with that,” Brown said. “But for some reason, Melvin makes my right shoulder go limp for about 10 seconds every time.”

Spriggs and the Browns haven’t been numbed by tragedy. In fact, they’re allowing emotion to guide them as they approach a rematch with Portsmouth Christian at 7 p.m. Saturday, at Brooke Point High School in Stafford.

If the Warriors manage to repeat as VISAA champions, there’s no doubting their motivations.

“That’s really the reason I want to do it, to make my grandmother proud of me,” Spriggs said.

Courtland fell behind 10-0 in the first four minutes against visiting Massaponax on Tuesday, but turned up its defensive pressure in the next …

The conversations between Riverbend wrestling coach Mark Roberts and his counterpart at Brooke Point, Travis Harris, have changed dramatically…

In the bizarro universe occupied by the Colonial Forge boys basketball team, points aren’t determined by making baskets, but by denying them.

Courtland boys basketball coach Eric Davis believes his team is a work in progress this season. But he also believes the Cougars have the pote…

St. Michael running back Melvin Spriggs Jr. (in white) lost his grandmother and cousin, and his mother is battling cancer.

Spriggs (left) has had an outstanding season as a running back.