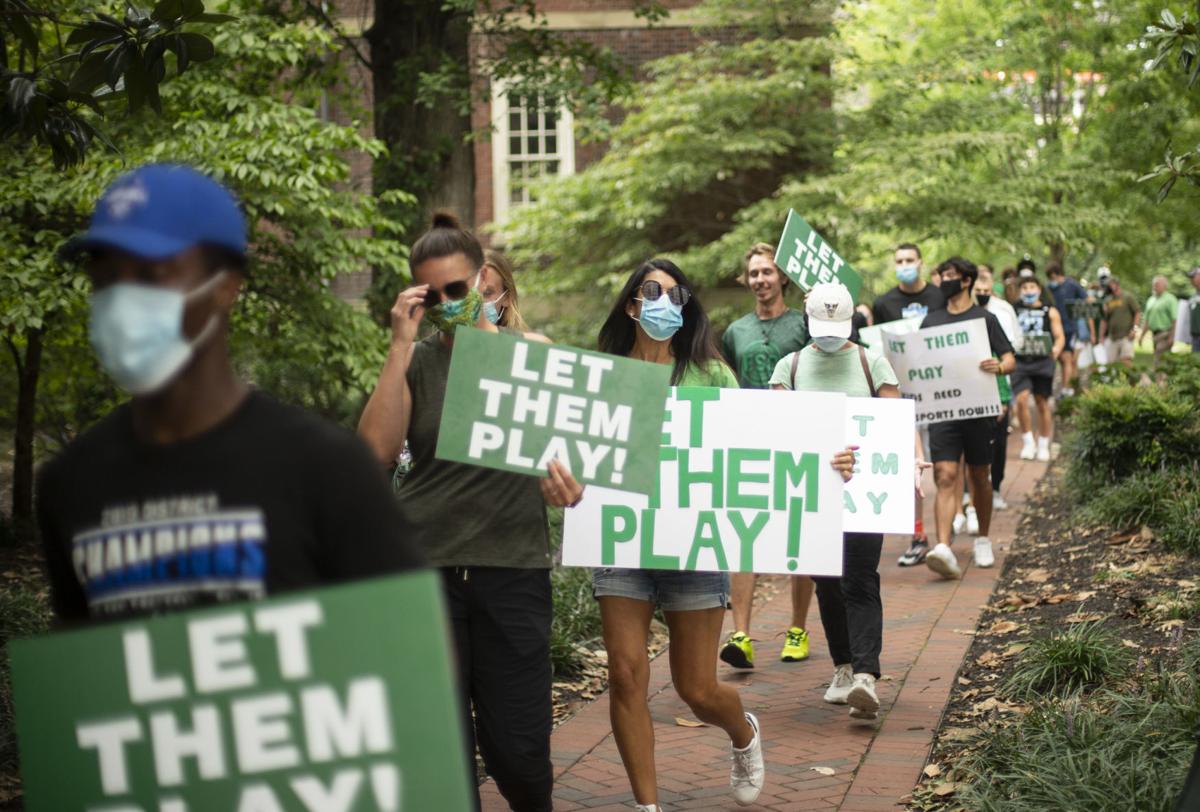 High school athletes and parents step off for an impromptu march near the state capitol in Richmond, Va. on Monday, Sept. 14, 2020 following a “Let Them Play” rally intended to persuade the Virginia High School Sports League to start the fall sports season. 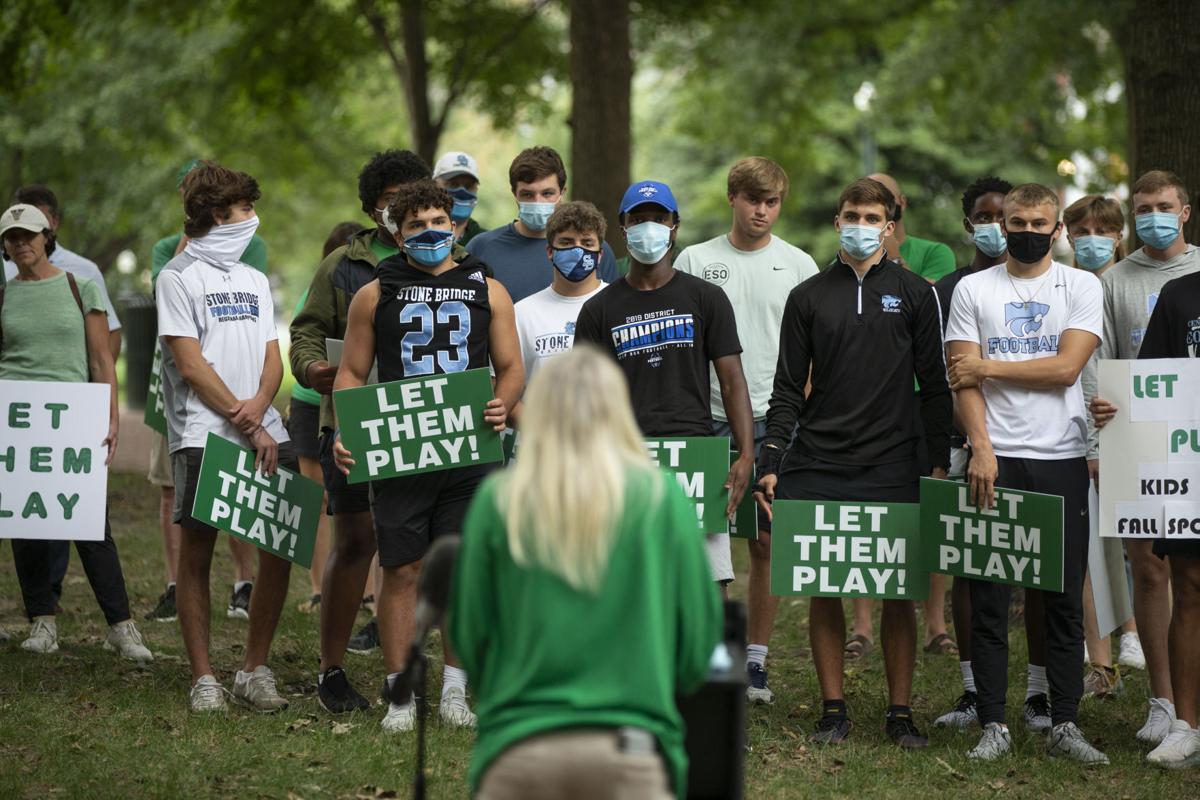 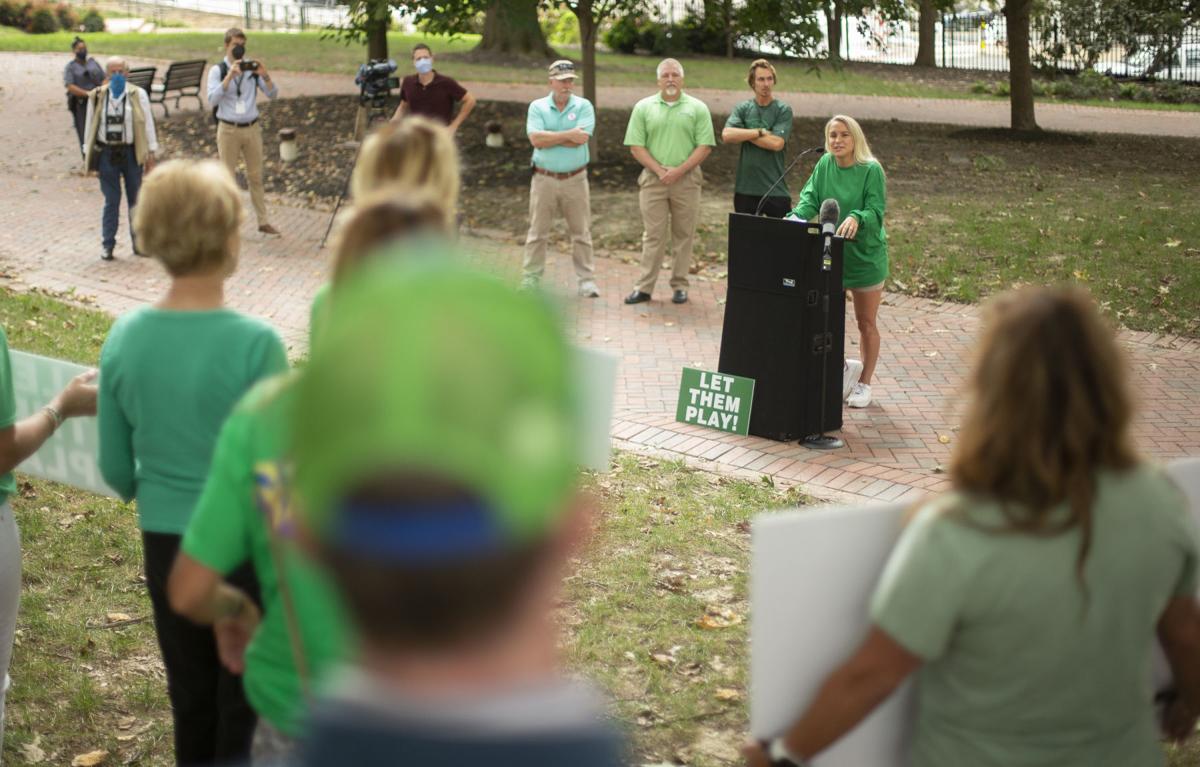 RICHMOND--As Holly Wiles glanced at the approximately 50 people that showed up for a “Let Them Play” rally at the State Capitol Monday afternoon, the Loudoun County resident had one regret.

“I’m sorry to all you football players and any other athletes that are here because I should’ve done this a month ago,” Wiles said. “I should’ve done it three months ago.”

The clock is ticking on Wiles’ goal for organizing the rally. The mother of Stone Bridge High School quarterback Billy Wiles said she hopes the rally and others that will soon follow will convince the Virginia High School League to reverse its decision to begin fall sports in February and instead start them right away.

King George senior quarterback Charles Mutter is family friends with Wiles and helped promote the rally on social media, but was unable to attend.

Virginia is one of 15 states across the nation that will stage football in the spring of 2021 because of the coronavirus pandemic, but Wiles and the group assembled Monday are more focused on the 35 states that are playing this fall.

“There are a lot of kids playing right now,” Centreville senior quarterback Jack Shields said. “So their kids are getting the first grabs at scholarships. In Virginia, we’re losing some of that.”

The VHSL’s Executive Committee voted in July to hold three seasons of condensed action, beginning in December with winter sports. Fall sports will start in February with spring activities beginning in April.

A scheduling model with the football season trimmed to six games and a “plus one” contest for schools which don’t make the playoffs is expected to be finalized at a special meeting on Thursday. The top four teams in each region would make the football playoffs under those guidelines instead of the eight in a typical season.

“The VHSL and its member schools have worked tirelessly over the past several months to create a plan for our students to participate in VHSL-sponsored athletics and activities,” the VHSL said a statement in response to the rally. “Our Executive Committee will meet this Thursday to approve and adopt our Championship + 1 schedule for the [fiscal year] 2021 athletic and academic activities season. This schedule provides every VHSL-sponsored activity a season during the FY2021 year.”

Deep Run assistant football coach Aaron Grigsby said the “Championship Plus One” format being discussed to kick off Feb. 22 is unsatisfying.

Grigsby said he’s concerned about the impact of a quick turnaround from the end of the season to the beginning of the fall 2021 campaign. He’s also noticed that some senior college prospects are choosing not to play. That group includes North Stafford senior defensive back Shawn Asbury and Louisa senior running back Robert Morgan, who orally committed to Virginia Tech and Howard, respectively.

“We’ve got highly recruited seniors and some of them are already opting not to play their senior year,” Grigsby said. “It’s tough on the coaches and the other players.”

The VHSL said while it understands the love for high school sports, it will continue to move cautiously. Virginia added 2,931 cases of COVID-19 over the weekend, including 85 in the Fredericksburg area. Virginia’s scheduled season-opening football game at Virginia Tech this Saturday was postponed after an outbreak in Blacksburg.

“We fully understand and support the passion of high school sports from our communities, parents and students,” the VHSL said in its statement. “From day one, we have been committed to getting our students participating in activities safely and responsibly.”

Andy Hilton operates a recruiting website based in the Hampton Roads region and he’s running for the Suffolk City School Board. Hilton said he attended the rally on short notice because “there are so many opportunities that are being missed right now because sports aren’t being played.”

“It’s so much bigger than football,” Hilton said. “It’s about providing hope for young people.”

Hilton said there’s a smart and safe way the VHSL could reintroduce sports without delaying it until December. He said teens are safer under the supervision of their coaches than they are with limited structure.

Hilton noted travel leagues are having sporting events, including large basketball tournaments. Holly Wiles said she attended one event in Northern Virginia last weekend with an estimated 1,000 people. She declined to name the event or the site.

Hilton said the effect on college scholarship offers will be profound. He noted that early National Signing Day is held in December with the traditional signing day following in February. He said currently college football coaches are offering scholarships to players already on the radar. But he said there’s no way for others not currently being recruited to gain recognition.

Shields said he holds one scholarship offer from Tennessee-Martin, a Football Championship Subdivision program. He was banking on his senior season to earn more offers.

“So you’re creating a set of haves and a set of have-nots,” Hilton said. “Unfortunately the kids who have not gotten the recruiting attention are not in much of a position to get the attention.”

The Stafford School Board meets again Sept. 22 and plans to vote on the issue then.

High school athletes and parents step off for an impromptu march near the state capitol in Richmond, Va. on Monday, Sept. 14, 2020 following a “Let Them Play” rally intended to persuade the Virginia High School Sports League to start the fall sports season.