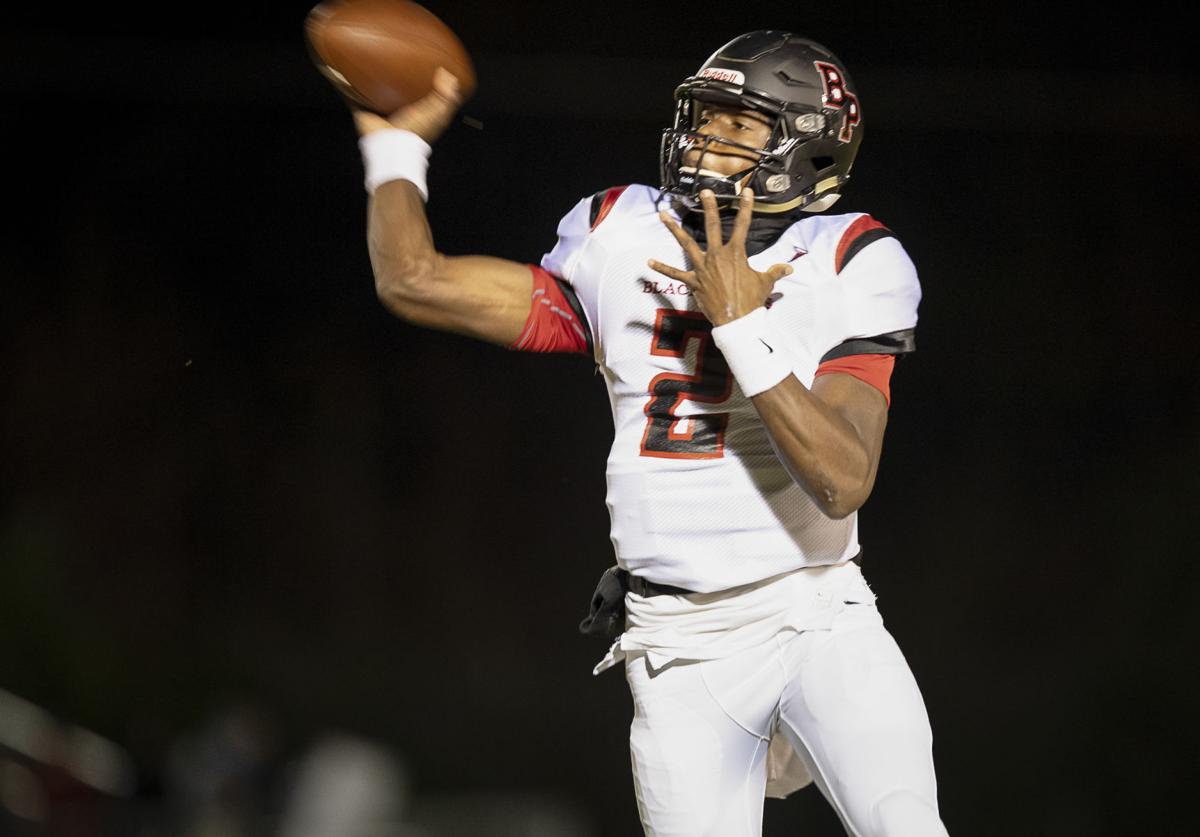 Brooke Point’s Noah Sanders passes during a 2019 game. The Black–Hawks junior is preparing for the VHSL delayed season. 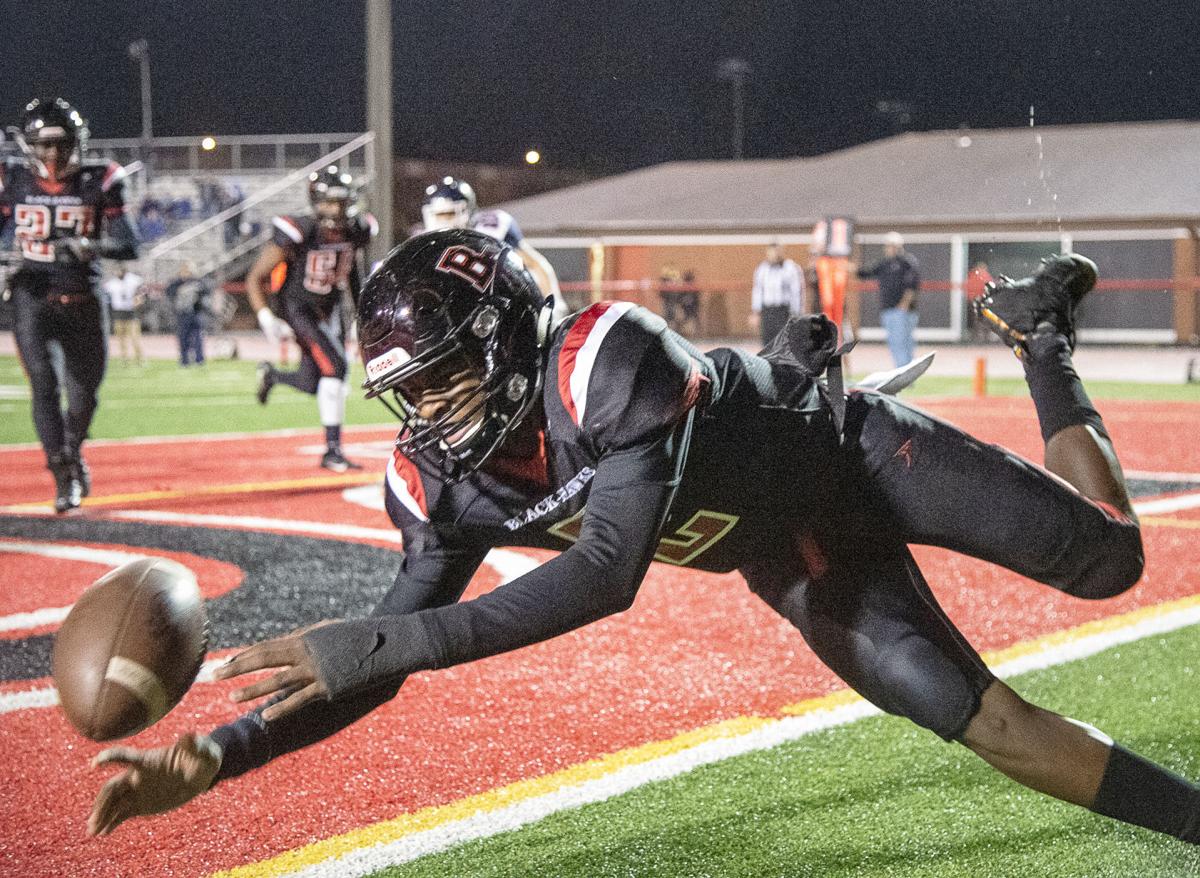 Noah Sanders can’t recover a ball during a 2018 game. The junior is preparing for the delayed season. 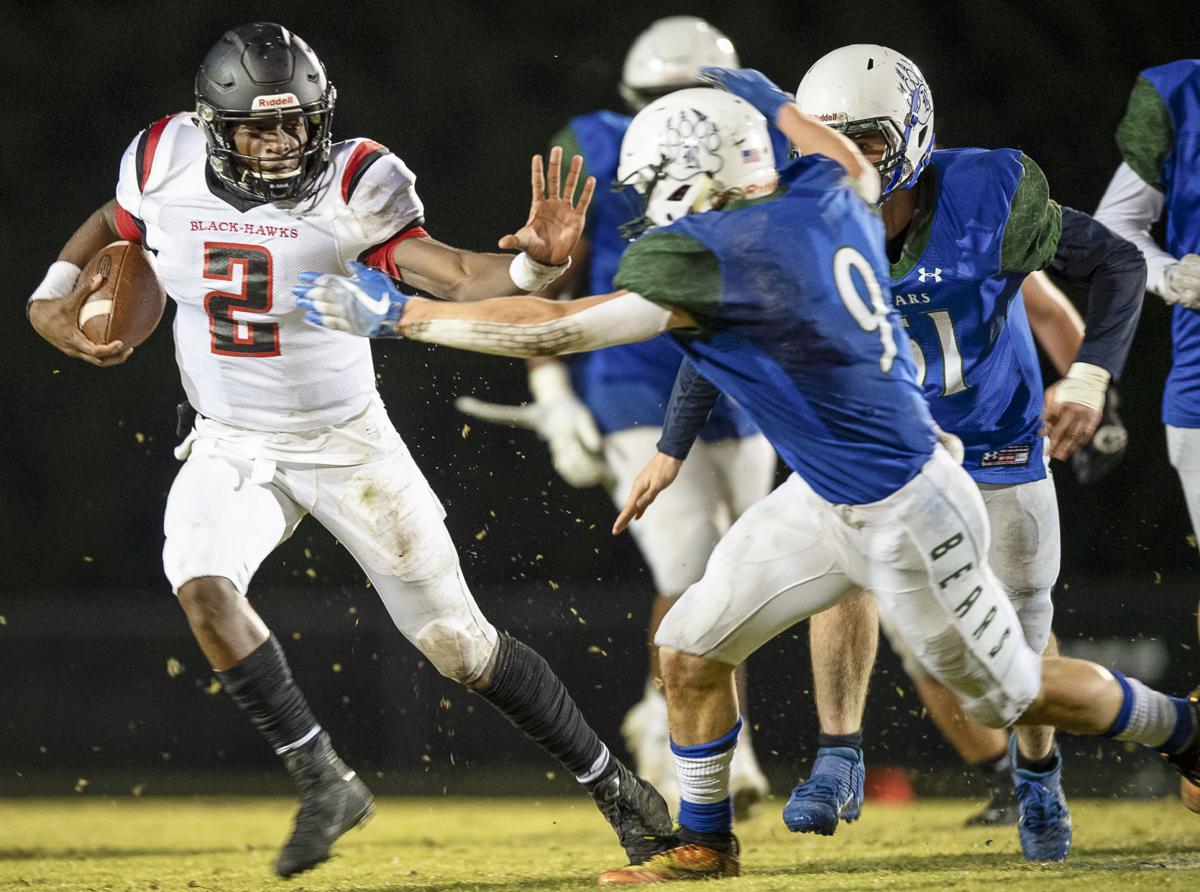 Brooke Point’s Noah Sanders (2) tries to break away from a Riverbend defender during a 2019 game.

Before the COVID-19 pandemic, Sanders was a fixture in the Black–Hawks’ weight room, adding 20 pounds of muscle to his 6-foot-2 frame. Coming off a sophomore campaign in which the Black–Hawks stumbled to a disappointing 1–10 record, Sanders has lent his emphasis to brawn and brain alike.

Sanders’ pandemic binge watching has consisted of full game tape from the Pac-12 and other college FBS conferences, supplied by Hazelwood. He picks a passer, North Carolina’s Sam Howell for example, and imagines himself thrust into the situation unfolding on the screen.

“I like watching how they handle different things and how it applies to my game,” Sanders said. “Just making things come second nature is something I’ve been working on.”

To that end, Sanders has been working on a weekly basis with Malcolm Bell, a “quarterback consultant” who played collegiately at North Carolina Central. From a mechanical standpoint, they’ve worked on shortening Sanders’ throwing motion to eliminate wasted movement.

“We’re going from a sudden start to a sudden stop, there’s not a whole lot of extra involved in that,” Bell said.

Beyond mechanics, Bell expects to see a more polished, cerebral quarterback next time Sanders takes the field. With that poise will come an enhanced presence as a leader.

“The leap I want to see and that I think he will make is having a better understanding of what his coaches are asking him to do, play to play,” Bell said.

After winning a quarterback competition with Charles Mutter in 2018, Sanders led Brooke Point to a 7–5 record as a freshman while dealing with a broken non-throwing hand. Mutter transferred to King George, where he emerged as one of the Fredericksburg area’s better passers.

The Black–Hawks weren’t nearly as talented last season, and Sanders was called on to make more plays with his legs. The multifaceted approach led to 2,300 total yards of offense and 15 touchdowns.

“Going into my freshman year, I had a label on myself as this pocket-passing quarterback,” Sanders said. “I’ve always had this athleticism, but I didn’t become a willing runner until last year.”

Like countless other prospects, Sanders saw his recruiting upended this spring when the pandemic cancelled camps and campus visits. A three-star recruit according to 247sports, he’s currently being recruited by UNC Charlotte, Rice, ECU, Toledo, Appalachian State, Penn and Marshall.

If the VHSL’s plan to play this spring goes off without a hitch, Sanders is looking at a six-game season starting in February. He’s expecting a playoff atmosphere and weather similar to the usual November playoff push.

“If we’re allowed to play,” he added. “That’s what I’m going to stay ready for.”

With the Virginia High School League postponing its fall sports season, Friday nights will be quiet this fall. But on each Friday, The Free Lance–Star will profile a local football player who was expected to have a breakout season and whose plans have been deferred until 2021.

The Stafford School Board meets again Sept. 22 and plans to vote on the issue then.

Brooke Point’s Noah Sanders passes during a 2019 game. The Black–Hawks junior is preparing for the VHSL delayed season.

Noah Sanders can’t recover a ball during a 2018 game. The junior is preparing for the delayed season.

Brooke Point’s Noah Sanders (2) tries to break away from a Riverbend defender during a 2019 game.