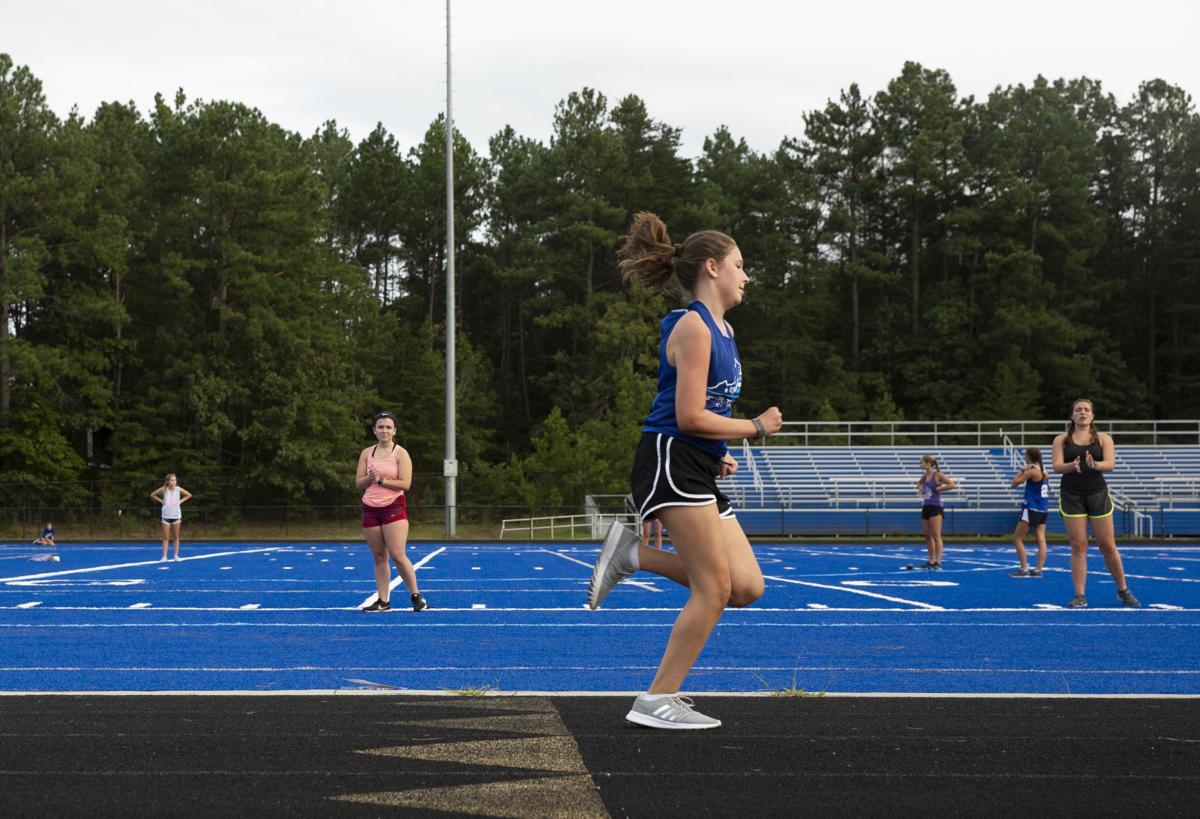 Courtland field hockey players cheer on teammate Audrey Rogers as she finishes a run during an offseason conditioning workout on Tuesday. Competition is on hold, but teams may train. 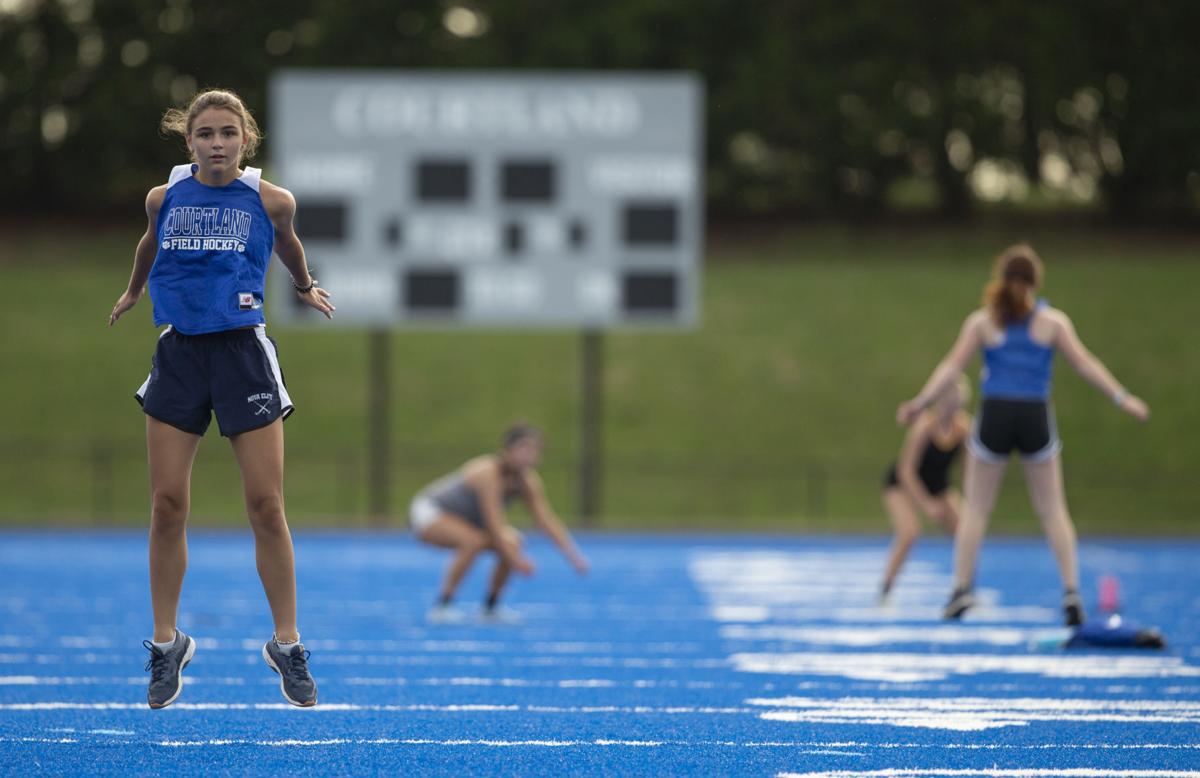 Ellie Holt, (left) a senior on the Courtland field hockey team, works out while maintaining social distance from her teammates. 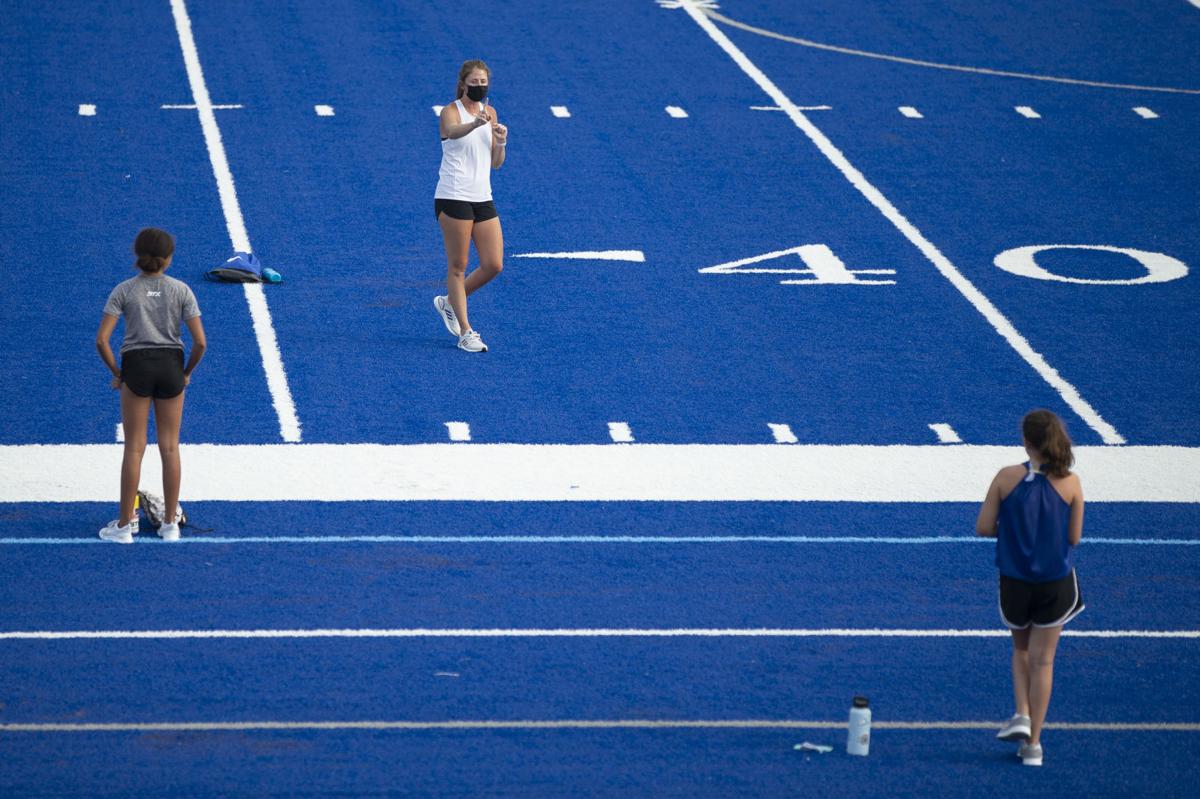 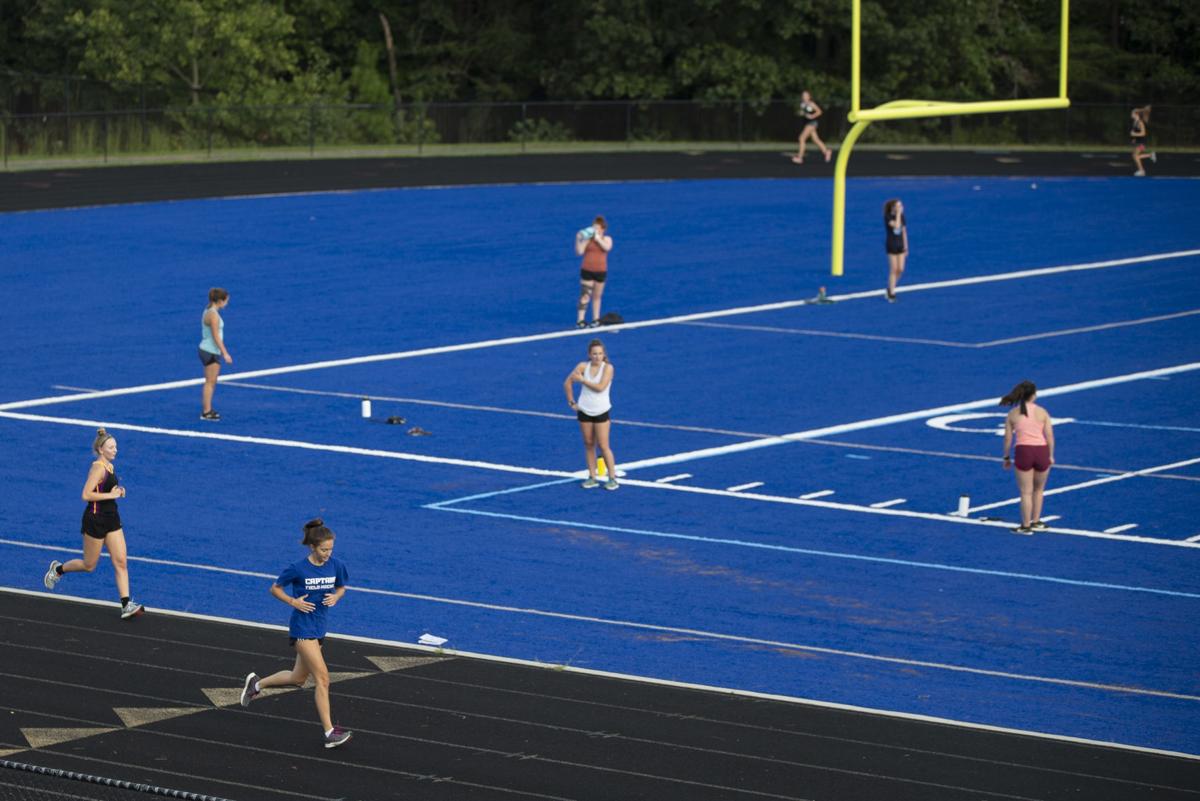 Courtland field hockey players participate in an offseason conditioning workout at Courtland High School in Spotsylvania, Va. on Tuesday, Sept. 8, 2020. Athletes were grouped in small pods of players and maintained a 10-foot distance in order to practice without masks.

As Elijah Christopher lined up with his Massaponax High School football teammates and looked around last Tuesday, he couldn’t contain his wide grin.

It was the first day Spotsylvania County allowed out-of-season conditioning to take place.

Athletic directors at the county’s five high schools said their coaches and athletes have been eager to gather again after nearly six months of restrictions because of the coronavirus pandemic.

“It was just exciting to be back,” Christopher said. “We haven’t been together in a while. We were all happy. It’s been all smiles.”

There are still strict guidelines to be followed.

Before coaches, athletes and trainers arrive they have to do an online health screening each time they participate.

The health assessment asks if they’ve experienced a body temperature above 100.4 degrees, chills, loss of smell or taste, cough or sore throat or other COVID-19 symptoms. Body temperatures must be checked by athletes or their parents before they arrive on school property, and not directly prior to participation.

“We don’t want them even coming to campus if they have a fever,” Courtland athletic director Ronnie Lowman said.

Spotsylvania’s schools are operating under Phase II guidelines. The policy calls for vulnerable individuals to not supervise or participate in any workout. Participants are to wash their hands with warm water and use soap or hand sanitizer with at least 60 percent alcohol before touching any surfaces.

Social distancing guidelines call for 10 feet of separation and face coverings whenever that’s not possible. Athletes must bring a gallon of water to each session.

While much of the protocol in place resembles the Virginia High School League’s guidelines, Spotsylvania County added a rule that all workouts are to take place outdoors until at least Oct. 12. County schools are currently conducting virtual learning and are aiming for the nine-week mark to switch to a hybrid model.

Lowman and Chancellor AD Len Carlson noted that as long as school is completely online, there will be no usage of indoor facilities. The VHSL is slated to begin winter sports in December.

“If we choose not to do hybrid, I don’t know if that’s going to change our athletic plan or not,” Carlson said. “I hope it doesn’t because I’d like to get wrestling, volleyball and boys and girls basketball inside.”

Athletes and coaches aren’t the only ones adjusting to new procedures. Carlson’s wife, Christy Carlson, is the athletic trainer at Massaponax.

Christy Carlson said trainers aren’t as hands-on as in the past. She and her colleagues may put athletes in braces more often instead of the routine tapings of injuries they typically perform in order to limit contact.

Christy Carlson added that athletes who are unable to perform because of injury will be sent home immediately instead of hanging out to watch drills.

The veteran trainer said she’s been impressed by the level of conditioning of Massaponax’s athletes. Lowman said a major part of the restart is getting kids acclimated to training again, but Carlson and Christopher said many of the Panthers’ football players arrived in peak form after months of at-home workouts.

“Some of my football players are in the best shape I’ve seen them in,” Christy Carlson said.

Only track and football started at Massaponax on Sept. 1. But this week, baseball, volleyball and girls basketball have been added.

Chancellor has 15 programs participating. Courtland has 10, with four more scheduled to begin by the end of this month. Spotsylvania High has nine programs going and Riverbend has eight.

“It’s great to see kids on campus,” Bears first-year AD Danny Tryon said. “I think they’re eager to get out there and to get involved and have something to do. That’s why we’re in this business, so it’s nice to see everybody out.”

Spotsylvania County is joined in the Rappahannock Area Health District by Caroline, King George and Stafford counties and the city of Fredericksburg. The health district has had 4,683 total cases of COVID-19 as of Tuesday afternoon.

Stafford County Public Schools decided Tuesday night not to allow its teams to conduct off-season workouts for the time being. James Monroe’s fall sports teams have been permitted to do outside activities since July 7, but no winter programs have gotten going. King George’s fall sports have been conditioning since earlier in the summer.

The hoops teams are allowed to train indoors, but with 10 feet of social distancing.

“I think you’ve got to trust that your coaches will make sure kids are in a safe environment,” Heizer said. “We haven’t had any issues with football … I hope it continues to work out for us.”

Christian Hamm had no problem sporting No. 63.

Stafford County coaches will receive training this week on the guidelines that Chief Officer of High Schools and School Safety Tom Nichols presented to the board on Tuesday. The first day of conditioning is scheduled for Oct. 5.

Gross-Matos ruled out for Sunday

Yetur Gross-Matos, a Chancellor graduate, won't suit up for the Panthers game Sunday.

The 6-foot-3 guard averaged 13.3 points per game as a freshman and was named first-team all-Battlefield District, all-Region 4B and third-team All-Area.

Courtland field hockey players cheer on teammate Audrey Rogers as she finishes a run during an offseason conditioning workout on Tuesday. Competition is on hold, but teams may train.

Ellie Holt, (left) a senior on the Courtland field hockey team, works out while maintaining social distance from her teammates.

Courtland field hockey players participate in an offseason conditioning workout at Courtland High School in Spotsylvania, Va. on Tuesday, Sept. 8, 2020. Athletes were grouped in small pods of players and maintained a 10-foot distance in order to practice without masks.