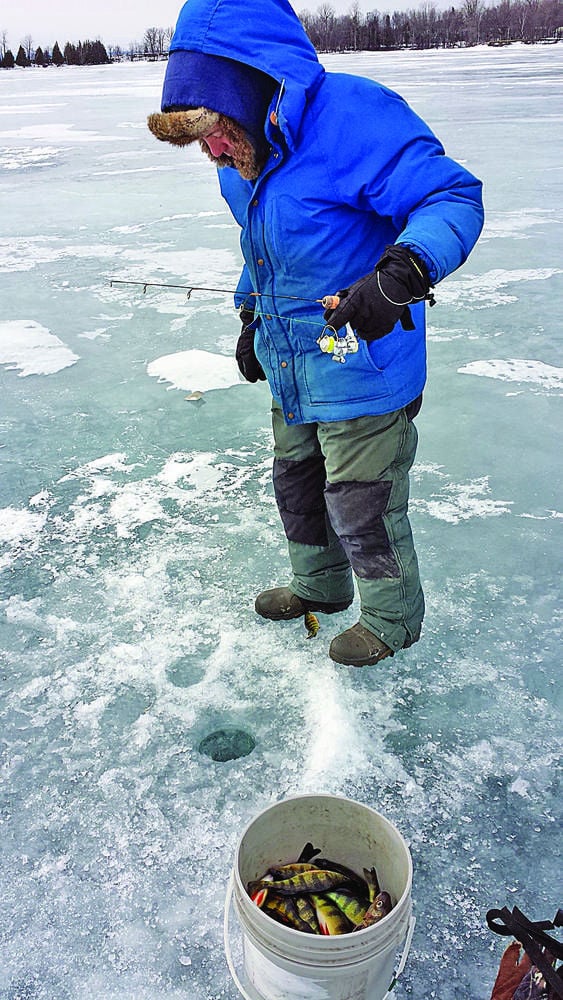 With a bucket half full of fresh yellow perch beside him,Bruce Collopy works a ‘bibit,’ hoping to catch another. 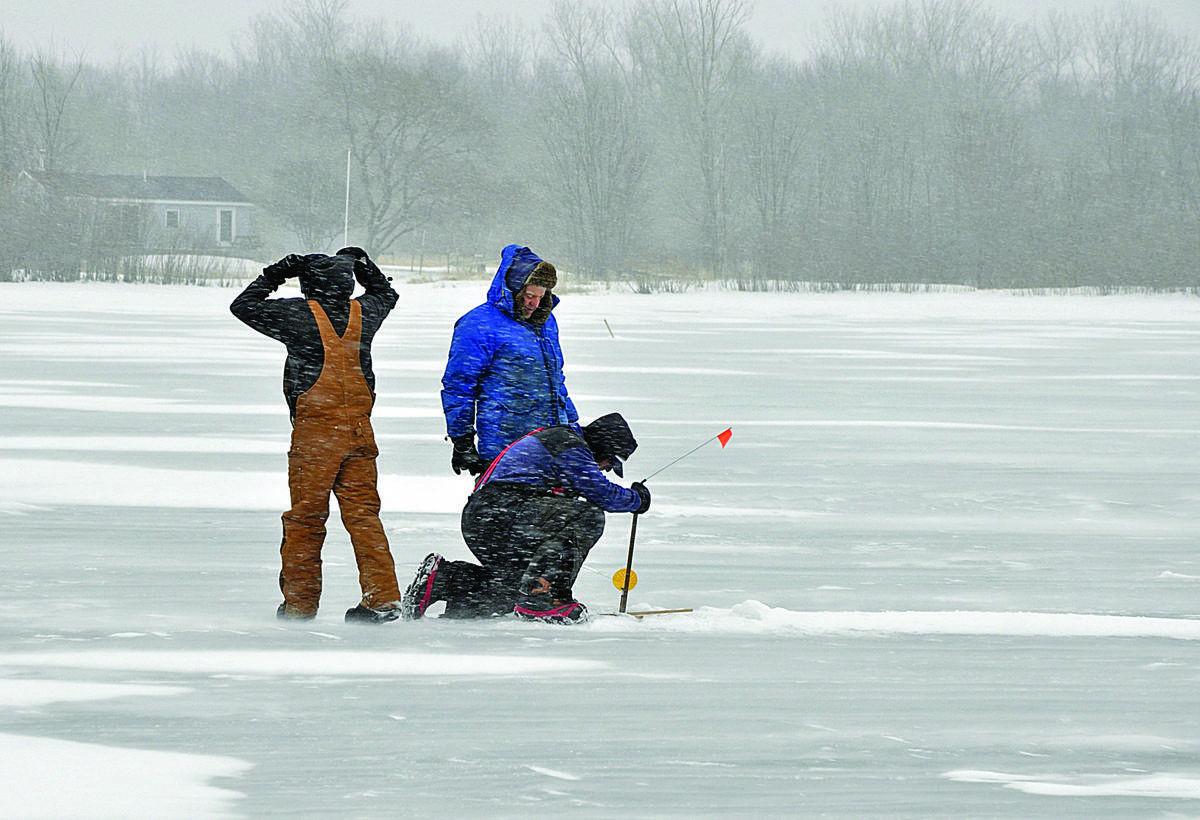 Collopy (in blue jacket), Jason Soter (left) and Dana Perrotte check their ‘tip-up’ rig, baited with a big minnow to entice a large northern pike. Heavy snow and wind prompted the men to retreat to a nearby shanty after the bait was set. 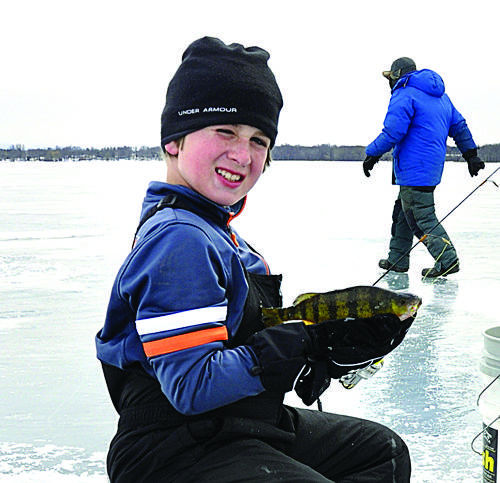 BY KEN PERROTTE / THE FREE LANCE-STAR

ARE YOU CRAZY?” a couple of people asked—rhetorically, of course—when I announced plans to escape Virginia’s recent balmy weather for an expedition to the frozen, white north a few miles from the Quebec border.

To locals coming off one of Virginia’s coldest Februarys on record and looking at a major warmup heralding the advent of spring, my retreat into the frigid jaws of a New England winter surely reflected that I was suffering from an undiscovered form of “March Madness.”

But there I was, sitting on a 5-gallon bucket, the occasional yellow perch flopping up inside and slapping my “derriére,” as they say in French Canada. It was Friday the 13th, but luck smiled on our fishing party as we yanked dozens of tasty yellow perch through 6-inch diameter holes cut in the nearly 3-foot-thick ice.

We were fishing Lake Champlain, specifically an area known as the Champlain Islands, large islands splitting the northern part of lake: Vermont to the east, New York west, and Canada north. The destination is about an 11-hour drive from Fredericksburg.

Ice fishing is cool (pun intended). The last two weeks of March is rock ’n’ roll time on the northern ice. That’s when big perch, their bellies yellow and laden with eggs, start moving into shallower water before spawning.

Thousands of people congregated on many of the big lake’s bays, enjoying a tradition dating back centuries.

If you haven’t tasted yellow perch, you’ve missed out on a fish many declare the sweetest and most succulent of anything hooked during piscatorial pursuits.

You can catch them in Virginia. In Eastern Virginia tidal waters, yellow perch are semi-anadromous, living most of the year in brackish water before making a late winter spawning (late February to early March) run. There is no daily limit on freshwater perch, with the exception of Lake Moomaw, which has a 10-fish limit.

The Mattaponi and Pamunkey Rivers sometimes offer excellent perch fishing, but not to the extent as prolific northern lakes where proficient perch anglers, on a good day, can sit over a few holes in the ice and fill a bucket or more.

I fished with my brother Dana, his son Luke, and my brother-in-law, Bruce Collopy. Dana had a power auger that speedily cut holes in the ice.

Our first location was a spot on the broad lake off Grand Isle. Big perch were hugging the bottom, 24 feet down.

Our short ice fishing rods were spooled with light 4-pound line. The bait were heavy jigs the locals call “bibits,” painted in a variety of patterns. Some fishermen, such as Mike Lacharite, were hammering perch with white and green or orange-sparkles patterns.

Lacharite tips his hook with an eye popped from a yellow perch. The salty flavors can prove deadly in enticing perch bites.

Before bibits, many northern ice fishermen used perch eyes exclusively to catch fish. Old-timers sometimes popped frozen eyes into their mouth to warm them before skewering them on a hook.

Another current favorite for accenting bibits are tiny, live maggots, carried in flip-top vials filled with sawdust. Maggots are effective with perch, pumpkinseed sunfish and bluegills.

Our second morning saw me experiencing difficulty cracking the fish-catching code. With a measly four fish in the bag, I hunched over the slush-laden hole and muttered while another angler 40 yards away steadily load his bucket.

“I’m here to spy on you,” I announced as I walked over. “What’s the secret, if you don’t mind? Any certain color you’re using?”

The fisherman, Dave Delibac, graciously explained he was using a bibit that glowed in the dark. He wasn’t tipping it with anything and the lure was barbless so he could easily flick the fish off and quickly get the bait back down to the bottom.

Perch are schooling fish. When you catch one nice one, the goal is to catch as many as possible before they move away.

I retrieved a couple of Collopy’s bibits and asked Delibac if he thought any might work. He cupped his hand over one and gazed in to verify it glowed, then suggested I grab his auger and cut a hole 20 yards away.

I happily complied and, within minutes, yanked a few more plump perch through the ice.

That afternoon, we caught a couple hundred perch in a location called “The Gut.” The trouble was most were dinky fish and we caught 15 for every one big enough to merit cleaning and eating.

The final outing was for northern pike. Several locations along the lake rent ice shanties. I booked mine with Holiday Harbor Lodge (holidayharbor.com) in North Hero.

These shelters, most with wood-burning stoves, are indispensable when weather plays rough—and Sunday was rough. Temperatures dipped into the low 20s, with sustained northwest 25-mph winds. It snowed horizontally for eight hours. Little snow collected on the ice, except near the 20 “tip-up” rigs we had set up and baited with large shiners.

When a pike takes the bait and runs, the tip-up’s spring-loaded rod with a flag releases to signal “Fish on!”

The ice was thick enough that we drove our trucks on the lake and parked next to the shanty. The little ice hut became a haven, with people coming and going all day long. I whipped up wild hog fajitas in a skillet on the wood stove and more than a couple of bottles of Canadian and local microbrew beer washed it all down in the finest ice shanty tradition.

In the end, we caught one barely legal pike.

To some who’ve never spent a day like this, such an effort can appear a little crazy; but for those who enjoyed that shanty as a base of operations and social center, it epitomized what winter fishing in the great white north is all about: good times.

RAPPAHANNOCK RIVER: Mark Faulhaber of the Rappahannock River Fishing Report says that the shad run is coming to an end. The striped bass bite …

RAPPAHANNOCK RIVER: Mark Faulhaber of the Rappahannock River Fishing Report says the shad bite is starting to slow down from Indian Punch Bowl…

KEN PERROTTE: A turkey Grand Slam is something to celebrate

IN THE turkey hunting world, achieving a Grand Slam is an ambitious goal, involving taking all four subspecies of this grand gamebird residing…

With a bucket half full of fresh yellow perch beside him,Bruce Collopy works a ‘bibit,’ hoping to catch another.

Collopy (in blue jacket), Jason Soter (left) and Dana Perrotte check their ‘tip-up’ rig, baited with a big minnow to entice a large northern pike. Heavy snow and wind prompted the men to retreat to a nearby shanty after the bait was set.