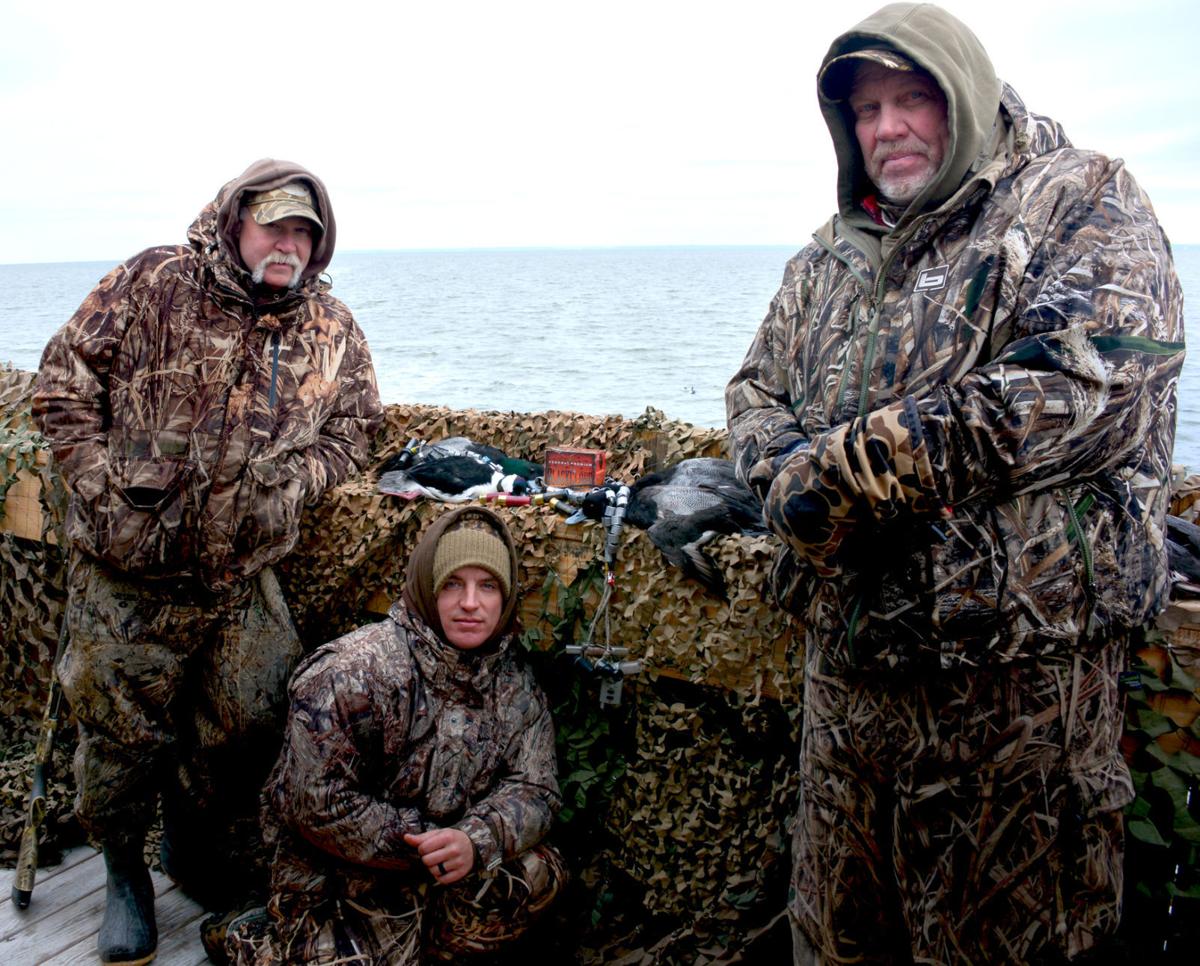 Scott Richards, James Willet III, and Chuck O’Bier pose with a few ducks from the start of the morning. 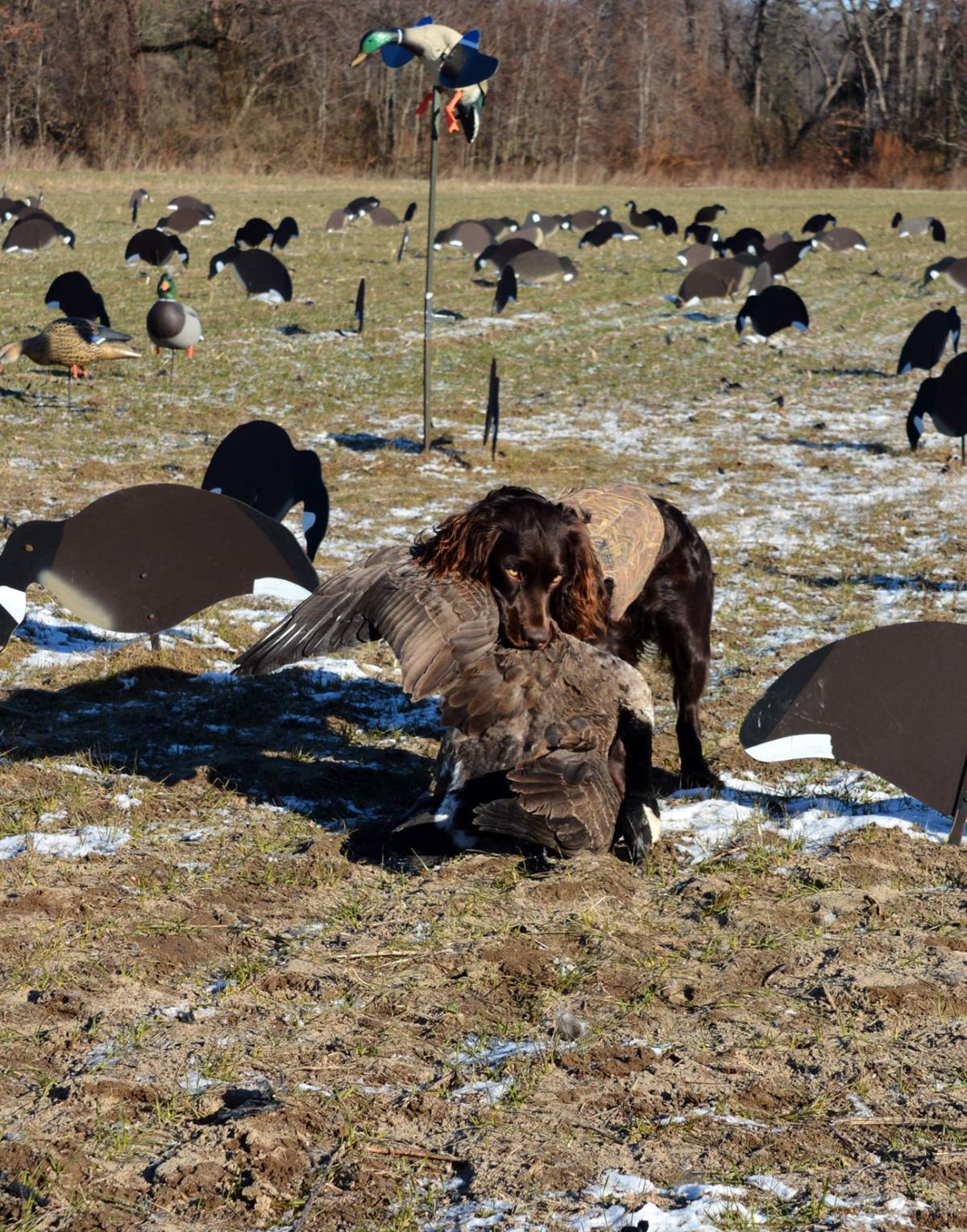 Harley hauls in his first goose (2)

Scott Richards, James Willet III, and Chuck O’Bier pose with a few ducks from the start of the morning.

Harley hauls in his first goose (2)

Ah, the vagaries of waterfowling. When it’s hot, it’s hot; when it’s not, it’s not.

With limited time available to get in a few hunts this year, coupled with the rare deep freeze our region endured for nearly a month, finding ducks in places where you’re able to hunt them may have been a tad sporty for many gunners.

This was to have been, I hoped, the year when I would finally get a redhead; not of the Ann Margret or Nicole Kidman variety, but the diver duck vintage. An interview earlier in the fall with outfitter Danny Harrison (harrisonsoutfitterservice.com) about Eastern Shore goose hunting tactics had me salivating when he informed me had a couple prime redhead and canvasback blinds on the Choptank River.

“Come on over late in the season and we’ll get on those divers,” he said.

One perennial problem for me is that the last week of duck season often conflicts with the SHOT Show in Las Vegas, an event I attend annually to get the lowdown on the latest in rifles, shotguns and gear. My late-season diver hunt would have to be in mid-January. With longtime friends and hunting buddies Jimaye Sones and Wayne Correia, we booked a two-day hunt for Jan. 16 and 17. Optimistically, we even planned on working in a third day of sea duck hunting near Tilghman Island, using Sones’ boat.

The second week of the month had me in Edenton, N.C. Sones lives there and we were to hunt the Chowan River and Albemarle Sound. Wrong—totally iced in. Sones couldn’t even lower his boat from the lift due to the ice. There went the sea duck plans. Fortunately, he had some good whiskey and cigars and we made do, just hanging out on the porch with the dogs.

Then, Harrison and I spoke over the weekend. “We’ve got 8 inches of ‘blow’ ice around all of our blinds and can’t get to them. Do you want to wait until later?” he asked.

I talked with the guys. The trouble was “later” had me in Vegas. We looked at the weather forecast, saw the coming warmup and decided to roll the dice. If duck hunting didn’t work out, we’d give it a go in a goose blind.

A day before we left for Easton, Md., Chuck O’Bier of Chuck’s Charters (chuckscharters.net) in Lewisetta called to see if I wanted to join him and some friends in hunting a new big water blind just off the Potomac River near Cole’s Point. It was a chilly 14 degrees when we climbed into the skiff and made the run to the massive blind. The amount of open water had me optimistic about Maryland. Only the skinniest of water had ice on it around Cole’s Point.

O’Bier, his buddy Scott Richards, an avid waterfowler, and I set out a variety of decoys, including two strings of canvasbacks and bluebills. Nearby blinds were already banging away as we climbed up and in and readied for action.

Thousands of bluebills were rafted up on the point about 1,000 yards in front of us. Enough were coming and going that we rapidly knocked out our limit of two birds each of that species. Buffleheads, long-tailed ducks (oldsquaw) and more offered sustained shooting action. A couple of goldeneyes also buzzed the decoys while we were talking.

It was a good shoot. O’Bier also has some prime floating blind locations staked out.

The open waters of the Northern Neck in Virginia sharply contrasted with the northern Chesapeake Bay as we crossed the massive Bay Bridge. Anything on the north side of a creek or marshy area was solidly iced, courtesy of the northwest winds blowing in thick, broken ice from the main body of water.

Looks like we were goose hunting. The arrival of warmer weather was delayed (of course), but the thought of a snowy morning with just the right amount of wind had us hopeful that our pit blind goose hunt might yield a quick limit and maybe a couple of wayward mallards.

Small flocks rose from the river. Harrison’s grandson Logan and fellow guide Tanner Dulin were in the blind. They like to set a big spread of silhouette decoys with some full body and windsock decoys closer to the pit. The decoys are set in an “X” configuration, letting geese land in an open hole no matter the wind direction. The biggest hole was in front of the blind, facing the usually prevailing northwest winds.

Most of the geese seemed to fly along the river and cut inland a mile or so on both sides from us. A couple of groups of high flyers on a mission came over and barely gave us a look. One lonely soul was enticed and Correia dispatched the honker with a load of BBs. It would be the only goose of the day.

The next morning saw Logan venturing out to try to find an open blind on the water while we joined Dulin back in the pit. The ice situation had worsened. In a “second verse, same as the first” scenario, only one solo goose came in. I finally knocked it from the sky with my third shot.

We shrugged. Such is hunting. We had some great meals and camaraderie on our trip to Easton, but the true highlight of the hunt was seeing Harley, my Boykin Spaniel puppy Jameson’s uglier brother, retrieve his first goose. He almost brought it back to the blind after figuring out how to pick it up. Sones was one proud doggie daddy!

Checking back in with O’Bier after the Maryland hunt, he informed me they hunted near Nomini Creek while I was sitting in a goose blind and had an easy 7-man limit of canvasbacks. Oh well. Sometimes you zig; sometimes you zag – and not always at the right time. We’ll find a redhead next year.