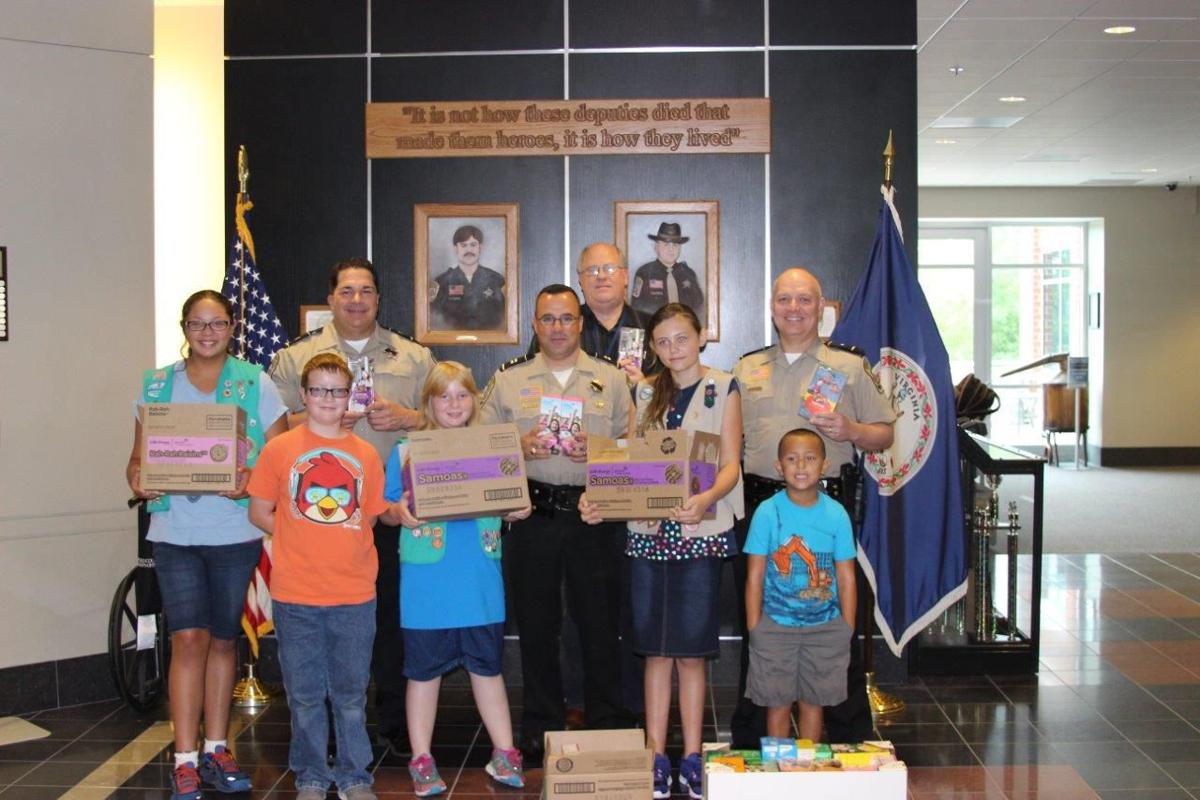 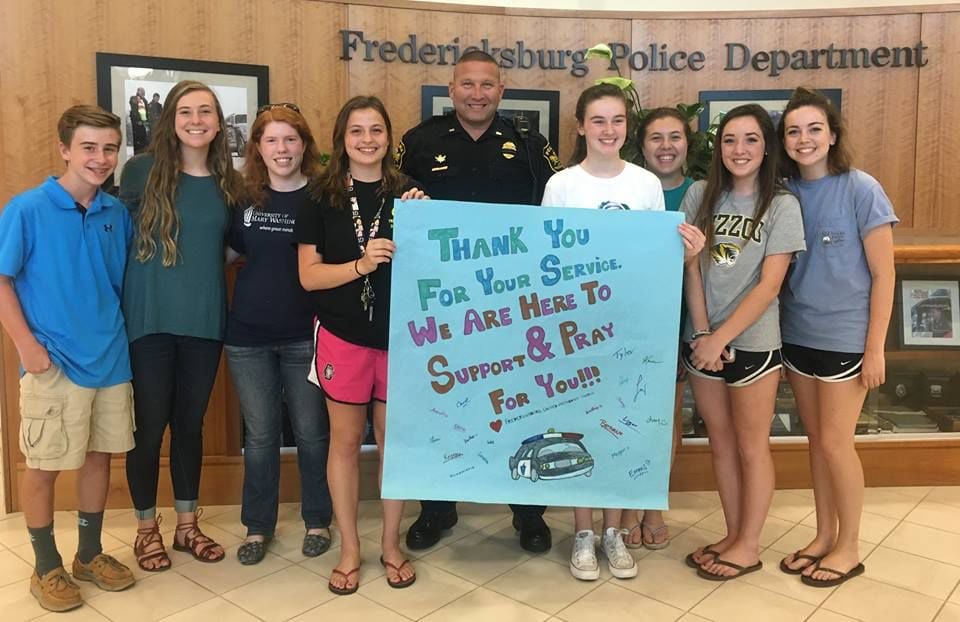 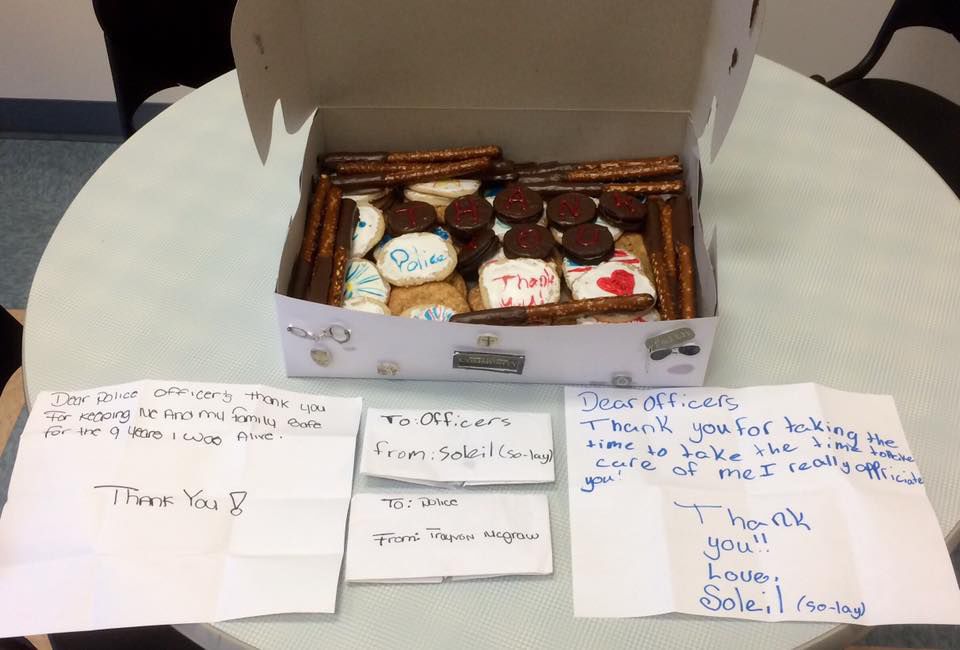 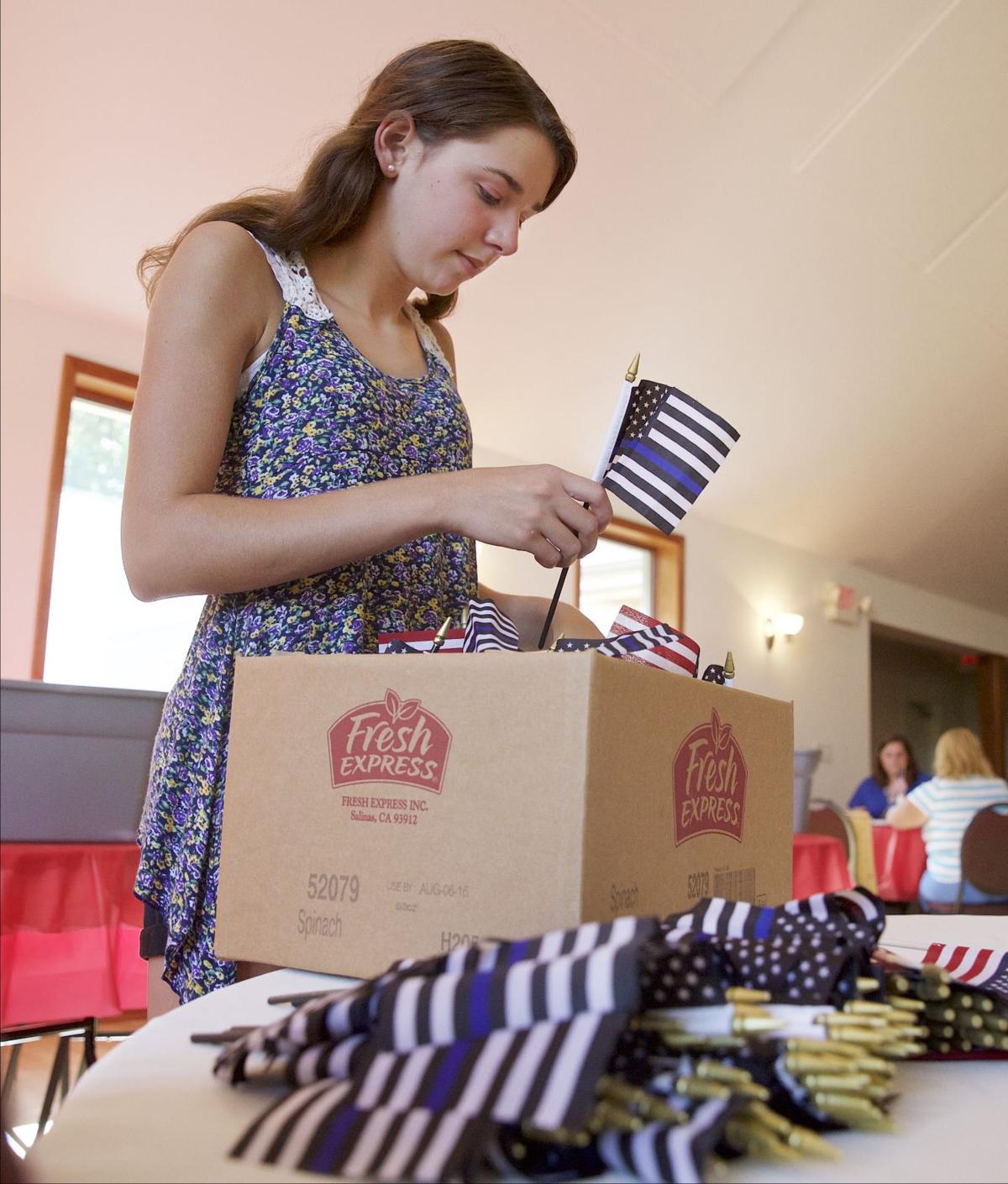 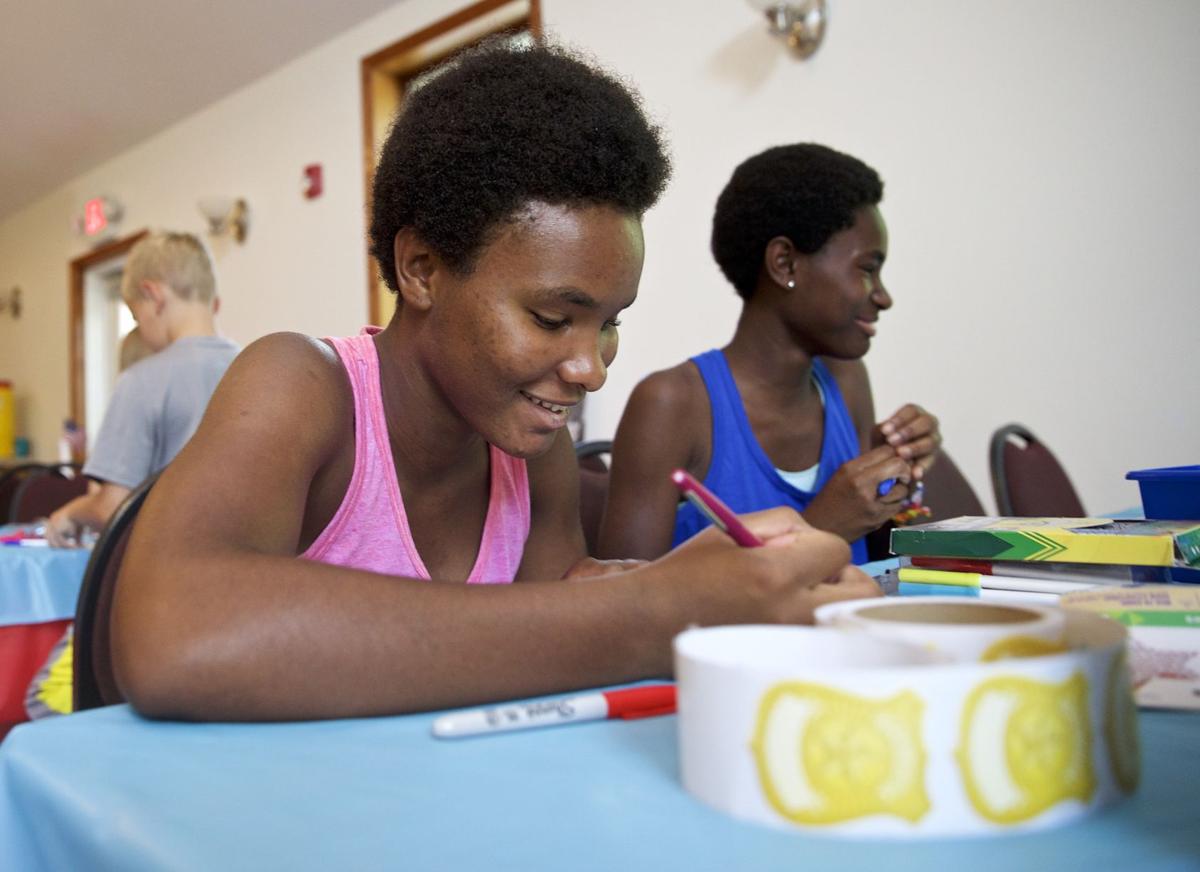 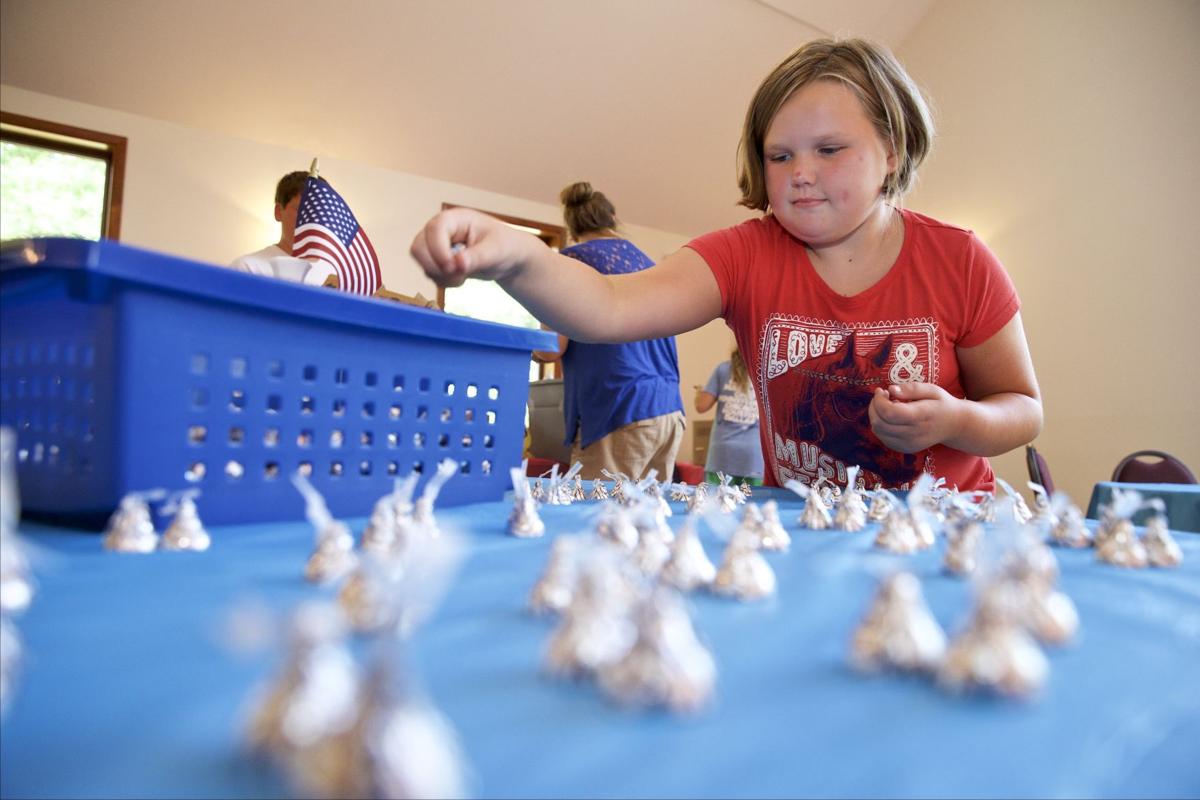 Joni Kanazawa pulled out her phone and stated scrolling through her contacts.

“I’m trying to figure out who can bring some Hugs,” she said.

Kanazawa looked around the room. “We’re short on love,” she laughed.

The fellowship hall of the Hollywood Church of the Brethren was actually brimming with affection—the tables were laden with candy, flags, ribbon, markers and stickers as more than 30 people assembled 210 goody bags for law enforcement officers.

But those goody bags included a poem, which named specific candy, such as “Lifesavers to remind you of the many times you’ve been one,” and “Mounds for the mounds of courage you show.”

And that poem included “Hershey’s Hugs because you deserve a big one.”

But it didn’t look like there were 210 shiny wrapped candies, so Kanazawa recruited a teacher to run to the store and replenish the supply of Hugs.

Meanwhile, Elizabeth Nast organized the tables by candy, so volunteers could navigate the room and stuff each bag with 15 different items.

Kanazawa and Nast lead the grassroots organization Ellie’s Elves, which put together the Show Your Love for the Blue effort Thursday night in preparation for Monday’s delivery to local law enforcement.

The treats are part of a growing community push to thank police officers following high-profile shootings that left officers dead in Baton Rouge, La., and Dallas.

She and her teenage daughter, Kelly Henshaw, stopped watching national news programs because they’ve grown so grim. So they were happy for the chance to reach out and do something positive. The pair assembled brown lunch sacks into goody bags in the fellowship hall.

“The news is so sad these days, I can’t even watch it,” Pearson said. “There is good but I think we forget about it because it’s overshadowed by the darkness that’s out there.”

Like many others in the fellowship hall, Pearson has experienced her own darkness. She lost a son to cancer a few years ago. The volunteers on Thursday included siblings, children and parents of people who have died from cancer.

Ellie’s Elves started as a group to help families struggling with cancer but grew to include anyone going through rough times.

The group began in honor of Ellie Blaine, a toddler who died nearly three years ago from pineoblastoma, a rare, aggressive brain cancer.

Kanazawa had been diagnosed with breast cancer shortly after moving to Stafford three years ago, and Ellie’s family supported her through treatments. Kanazawa learned she was in remission just before hearing that Ellie had a brain tumor.

She pulled volunteers together to provide an early Christmas for Ellie and her family, with lights and presents.

When the toddler died days before Christmas in 2013, Kanazawa and her crew lit luminarias during the visitation—and kept them lit all night in Ellie’s honor.

“Her mom still talks about rounding the corner to come to the church to say goodbye and seeing those lights on the hill,” Kanazawa said. “Ellie loved lights. She truly showed us that no matter what you’re going through, to shine—and how to let other people shine, which is an interesting thing to learn from a 2-year-old. No matter how dark it was, she brought out the light in us.”

The group adopted the motto “Let it shine,” and tries to look for new ways to brighten days, Kanazawa said.

She wanted to spread cheer to police officers, because her husband served in law enforcement when the pair lived in Atlanta.

“They run toward danger when we run away,” she said. “We want to thank them for that.”

The day after police officers in Dallas were ambushed and killed, the break room of the Fredericksburg Police Department was filled with handmade cards, homemade cookies and other treats.

The walls of the department's roll call room are papered with cards, letters and printed Tweets of appreciation, said Sarah Kilpatrick, public information officer for the city police.

The community has reached out to law enforcement acrpss the Fredericksburg area, sharing cards, baked goods and other treats. Friday morning, Lifepoint Church stopped by the Stafford Sheriff's Office with coffee and donuts for "millions of people, it seems," said M.C. Moncure, spokeswoman for the sheriff's office. "It was like the loaves and fishes but coffee and donuts."

The church also brought treats to the Spotsylvania County Sheriff's office as part of the congregation's annual Paint the Town Red effort.

Friday's report from the state also included the first death of a local Native American and a new record for the most new cases in a single day.